The Drôme: The Organic Heart of France 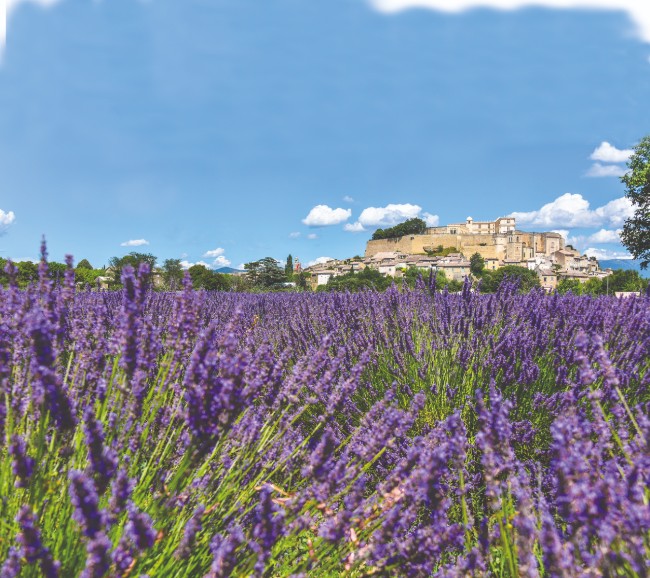 From its sweeping mountain ranges and fragrant lavender fields to its tiny hilltop villages, the département of the Drôme is becoming increasingly popular with those seeking a better quality of life, says Caroline Harrap

The sun is shining on a warm afternoon in the small town of Nyons, at the Provençal end of the département of the Drôme, and around us clouds of lavender grains rain down, settling in our hair like confetti at a wedding. It’s harvest time, and huge bundles of this aromatic flower are being brought in from the surrounding fields. I wonder to myself, as I breathe in deep draughts of the heady scent, if this is the reason why people seem especially relaxed here.

While there are some who won’t have heard of the Drôme, let alone its lavender, this often overlooked département just to the north of Provence is actually France’s leading producer of aromatic and medicinal plants. And this is one of the few areas with the prestigious Appellation d’origine protégée certification for its lavender, meaning that which is harvested here is of the highest quality.

And it’s hard to think of a better advert for the plant’s properties than Philippe Soguel, owner of the Distillerie Bleu Provence in Nyons, which first opened for business in 1939. Today’s fragrant haul will be made into organic essential oil. Brown as a berry, and with eyes almost the colour of lavender, Philippe is full of bonhomie as he extols the virtues of this renowned plant and its importance to the area. “Here at our distillery, we are proud to continue this historic tradition,” says Philippe, whose business has also now expanded with a museum, shop and café (be sure to try the lavender ice cream!). “We are committed to sustainable agriculture, the protection of the environment and encouraging a better knowledge of lavender and other aromatic plants. That way, we can help to preserve these beautiful landscapes.”

It’s a philosophy that we come across time and again in the Drôme. In fact, almost everyone we meet has something to say along these lines: there’s a love of nature here, a fierce determination to protect it, and an appreciation of the important things in life as well as an emphasis on wellbeing.

For instance, it comes as no surprise to learn that the Drôme is also the leading département for organic production. Everywhere we go, its famed hilltop villages are dotted with signs advertising ‘bio’ fruit and vegetables… well, either that or yoga studios, artists’ ateliers and, reflecting another strong local tradition, ceramics workshops.

Looking over the bridge in the picturesque town of Nyons. Photo © M. Shellard

Perhaps the vibe here also has something to do with the département’s specific geographical location. Shielded by the protective barrier of the Vercors Massif on one side and the Rhône river on the other, and with the laidback Mediterranean influence drifting up from the south, it’s almost as if the worst of modern life has passed it by – a bit like the Provence of old, before the tourists arrived.

Given all this, it seems appropriate that one of the first places we visit on our trip is the Drôme Valley – which has the highest proportion of organic agricultural surface in the country. Home to a designated Biovallée, it is recognised across France as the reference territory for sustainable agriculture and a way of life respectful of the environment.

Also a place of great natural beauty, the Drôme Valley is located on a clear climatic boundary between the alpine mountains and the Mediterranean region, resulting in a rare diversity of plants.

Here, you can harvest juniper, arnica and gentian (typically mountain species) as well as lavender, helichrysum and thyme (usually Mediterranean). Consequently, this area is also the country’s leading producer of essential oils. 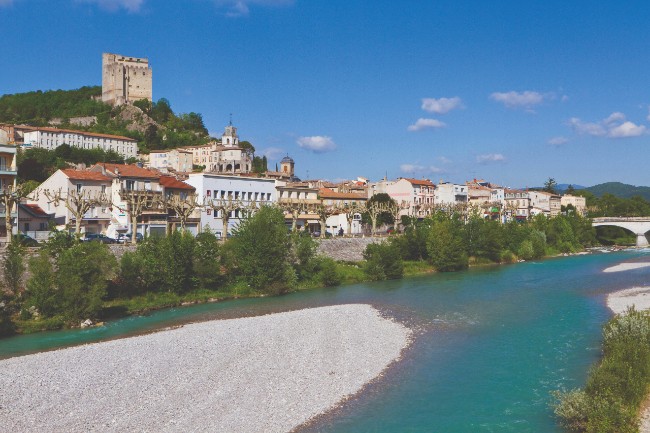 Crest is known for being a creative hub. Photo: Alamy

Then, running through the heart of it all, there is the Drôme river. One of the last ‘wild’ rivers in France, meaning it has escaped any major changes to its natural course, it also offers some idyllic bathing spots. In addition, just to the northeast, there is one of the Hexagon’s most impressive waterfalls, the Druise, which at 72m is higher than Niagara Falls.

“This really is a very special part of the world, with its own particular ethos, and it tends to attract people seeking a better, alternative way of living,” says Nicolas Adam, co-director of tourism for the Drôme Valley, when we meet in the medieval town of Crest. “It’s also a very artistic, cultural place, with many creative spirits living here, so it has a reputation for quite a bohemian, hippie vibe.”

Very much at the heart of the valley, Crest is a beautiful and yet authentic town. As we ascend the narrow streets, we pass ancient archways, hobbit-size homes hewn into the hillside and lines of laundry hanging out the windows. Wild flowers also burst out of every conceivable crevice.

At the top, you will find the tallest medieval keep in France – at 52m high. Once part of a fortress, and then a notorious prison dubbed the “Bastille du sud”, it is now a museum. Today, the tower is also renowned for its panoramic views over the red-tiled rooftops, verdant forests and foothills of the Alps.

Speaking of which, while our own trip doesn’t allow time for a recce into the mountains, we listen, entranced, to Nicolas’s stories of this spectacular landscape. Part of the Parc naturel régional du Vercors, the area is renowned for its rich flora and fauna – with 65 species of mammal, 135 types of nesting birds and 17 species of reptiles and amphibians – as well as its many caves, chasms and sinks.

We also long to see the ‘perched syncline’ of Saoû – a rare geographical phenomenon resulting in a self-contained, forested valley resembling a gigantic ship’s hull. For now, though, we content ourselves with identifying the legendary ‘sleeping lady’ in the shape of the distant peaks. 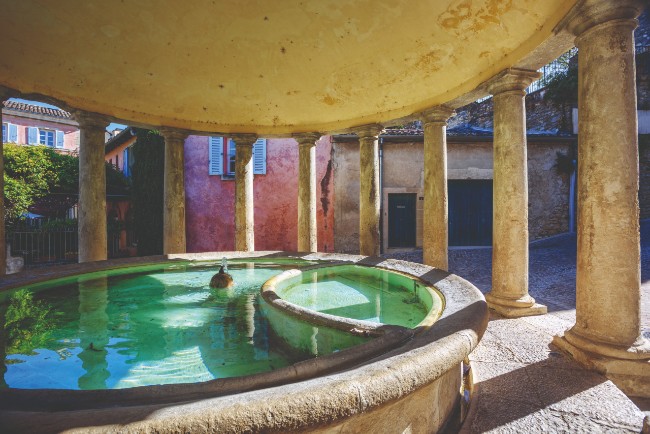 The neo-classical washhouse fountain in the village of Grignan, where washerwomen would gather to do their laundry in days gone by. Photo: Alamy

As well as the steadfast silhouette of the mountains, the other constant here in the Drôme is the perched villages that characterise the area. Rising out of the landscape like miniature fairy-tale cities, many of these idyllic eyries date back to medieval times.

For example, to the west of Crest but still in the Drôme Valley, we visit the enchanting enclave of Mirmande – officially designated one of the ‘Plus beaux villages de France’. Resurrected after the war thanks to Cubist painter André Lhote, nowadays you can wander along the ramparts, admire the lovingly renovated houses and visit the medieval church of Sainte-Foy. 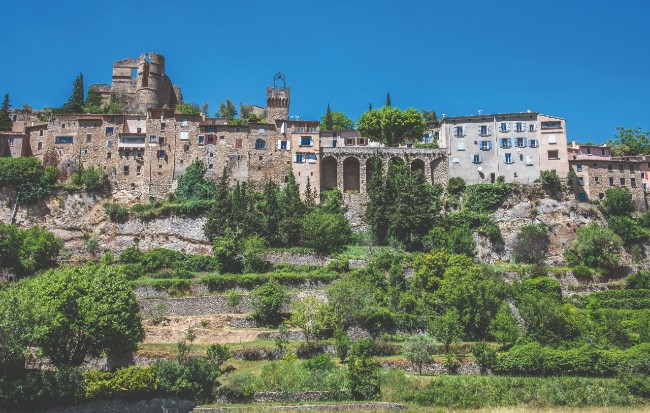 In fact, the département can lay claim to five villages with the prestigious ‘Plus beaux villages’ label – the others being further south in the Drôme Provençale. First up, there is Le Poët-Laval, with its 12th-century keep, many exhibitions and museum about Protestantism. Then, down in the southwest, La Garde-Adhémar is known for its medieval church, vaulted passageways and beautiful botanical garden. Finally, in the southeast, there’s the thermal hotspot of Montbrun-les-Bains, celebrated for its healing waters.

The medieval church at the top of La Garde-Adhémar is well worth a visit. Photo: Caroline Harrap

Also not to be missed, further south still, is the hilltop haven of Grignan. Surrounded by mountains, mauve lavender and a maze, it is crowned by a Renaissance palace, the Château de Grignan, made famous in the letters of the Marquise de Sévigné. As well as lavish interior rooms, this impressive edifice also offers breathtaking views over the region.

While these may be the most famous of the villages, there are countless more ‘secret’ nooks to discover, too. Back in the valley, we stop off at the charming hamlet of Cliousclat, known for its long tradition of ceramics. Here, you can visit the historic Poterie de Cliousclat and buy beautiful earthenware. Incidentally, the village of Dieulefit, in the Drôme Provençale, is another pottery ‘hotspot’, with some 40 workshops, many ceramic stores and a museum on the subject.

Of course, the other thing about visiting all these places is that driving between them is a joy in itself– and an opportunity to appreciate the diverse landscapes of the Drôme. For instance, heading into the Drôme Provençale, the scenery starts to give way to silvery olive groves, rolling vineyards and cornflower-blue skies – accompanied by the humming of cicadas. Suddenly, you’re in the south.

Olive picking at the Vignolis co-operative in the area around Nyons. Photo © J L Abraini, Vignolis

In the summer, the area is also adorned with the purple haze of lavender – a sight not to be missed. The best time to come (and, yes, get the obligatory Insta-pic) is between mid-June and mid-July, and the tourist office has a handy trail you can follow.

“From lavender and olives to vineyards, these beautiful, unspoiled landscapes are the source of a very special quality of life here,” says Michael Shellard, the tourism director of the Baronnies in Drôme Provençale, as we join him for a cycle ride around Nyons. “It’s a pleasure to share this with our visitors.” 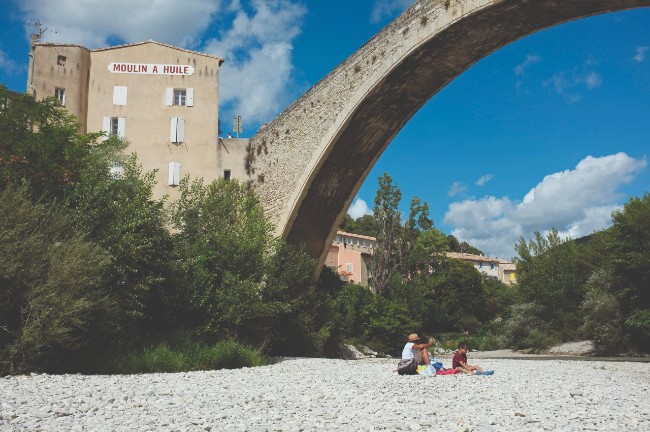 Relaxing under the Roman bridge at Nyons. Photo: Alamy

During our tour around this picturesque town, we certainly meet some truly inspiring people and discover some wonderful artisan products – ranging from the fine olive oils of Vignolis to the colourful woven mats of La Scourtinerie to the plant-infused vinegars of Vinaigrerie La Para. In most cases, you can enjoy a tour of the premises, too.

Then there’s the huge market, which takes over the town each and every Thursday, in front of the ornamental arches belonging to the Randonne tower. This is the perfect opportunity to sample the flavours of the region – from the black olives of Nyons, truffles from the Tricastin and raviole du Dauphiné, to pogne de Romans, chocolate from Tain-l’Hermitage and the famed nougat from Montélimar. And that’s not to mention the wines! With some 20,000 hectares of vineyards spread across the département, an impressive 96.5 per cent of them have AOC or IGP status. Notably, as well as the celebrated sparkling wine Clairette de Die, there are three Côtes du Rhône vintages: Hermitage, Crozes-Hermitage and Vinsobres.

A view over the vineyard of Maison M. Chapoutier at Tain-l’Hermitage. Photo: Caroline Harrap

Up in the north of the region, amid the hills high above the Rhône, we pay a visit to the biodynamic vineyard of Maison M. Chapoutier at Tain-l’Hermitage in La Drôme des Collines. Here, you can whizz up and down the steep slopes on electric bikes before enjoying a well-deserved wine tasting.

The utterly magical Palais Idéal du Facteur Cheval in Hauterives, which was created by a postman. Photo: Frédéric Jouhanin

Also, if you do just one thing in the Drôme, an easy drive away you will find the enchanting Palais Idéal du Facteur Cheval in Hauterives. Created by a postman, this unique Gaudí-esque folly has inspired artists for more than a century; it really is just magical.

Finally, back down in the south, and with our trip almost at its end, we stock up on lavender goodies to take home – including, crucially, some of that organic essential oil. What better souvenir of our time in the Drôme?