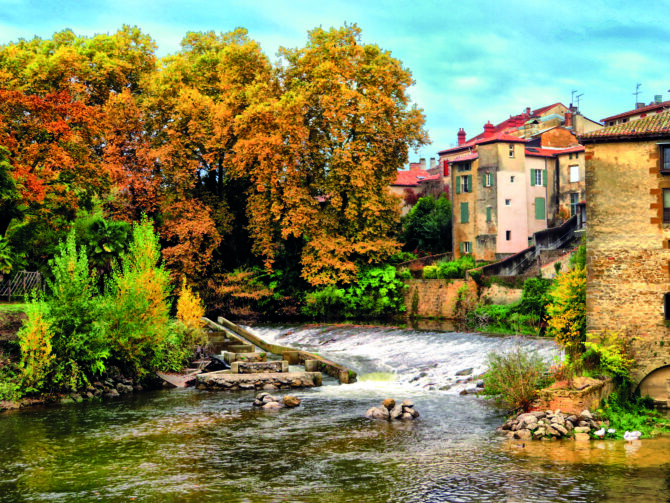 Sue Aran provides a local’s guide to some of the hidden gems and rural back roads worth exploring in glorious Gascony.

When it comes to road trips, the French countryside is hard to beat. And Gascony in particular seems to offer a carefree experience for those looking for an off-the-beaten-path adventure away from the crowds. These two inviting itineraries will take you to the heart of historic Gascony and its irresistible douceur de vivre, so let the horizon unfurl before you and prepare to be charmed.

Part of going on a road trip is not knowing where you’ll wind up. It’s the kind of adventure I love, but it’s always helpful to have a basic idea of the history of the region you’re driving through. Originally called Vasconia, a part of Roman Gallia Aquitania, Gascony spanned the width and breadth of western France from the Loire River southwards to the Spanish Pyrenees, and from Toulouse westwards to the Atlantic Ocean. Its capital was once Bordeaux.

Today, Gascony is divided between the regions of Nouvelle-Aquitaine and Occitanie, each with its own ancient history, colourful landscapes and unique traditions. A powerful duchy in the Middle Ages, Gascony came under English rule in 1154 through the marriage of Eleanor of Aquitaine to Henry II of England, and remained English until the end of the Hundred Years’ War in 1453, when it formally became part of France.

A good place to begin this tour is the handsome town of Agen, which can be reached via the TGV from Paris. A 45-minute drive on the A62 will bring you to the town of Moissac, one of the major Romanesque sites in France, which is situated on a beautiful stretch of the Tarn river. It is famous for its Abbaye de Saint-Pierre and 12th-century cloister, considered to be one of the most beautiful in the world, with the oldest and largest collection of carved Romanesque capitals.

Sometimes the perfect village appears where you least expect it. Among the many villages and market towns to explore in the surrounding countryside is the historic village of Auvillar, south-west of Moissac, overlooking the Garonne river. Listed as one of the Plus Beaux Villages de France, Auvillar has a history dating back to the Romans. It is small, but perfectly formed and surrounded by ancient fortified walls and gateways: it doesn’t take long to explore, but the unusual architecture and village centre are worth it.

Once south of the Garonne, the countryside is delightful for slow touring: the rolling hills stretch to the horizon with few towns and villages to interrupt a leisurely journey. It’s easy enough to turn off the road and find a fold in the landscape to enjoy a picnic, or call in to a vineyard for a dégustation.

Located on the border of the Tarn-et-Garonne and Gers departments, you’ll discover the small but splendid Baroque-style church of Saint-Pierre in the heart of the tiny village of Lachapelle, and be sure to check out the beautiful pastoral panoramas from the château. If you speak French, you can enjoy a guided tour full of anecdotes and local history.

Venturing slightly northeast, you’ll find the diminutive Château de Flamarens. Built in the 13th century, it is a fine example of stately Gascon architecture with a spectacular ruined church. Bought as a dowry for the niece of Pope Clement V in 1289, it was used as a fortress during the Hundred Years’ War. Nearby, the Château de Plieux, another beautifully restored Gascon fortress, is an important centre of contemporary art exhibitions and cultural events. You’ll be amazed at some of the fine exhibits on view.

Continuing south on what was the old ridge route from the Pyrenees to the Garonne river is the village of Saint-Clar, founded in 1289, which is renowned for its white garlic. It is an unusual fortifed village with two arcaded squares and two historic centres. Some of the storefronts are reminiscent of Hollywood movie sets and perfect for photographs.

Following the contour of the Save Valley south is the small town of Samatan, which boasts the most important marchés au foie gras (foie gras markets) in the region. It has a wonderful Monday farmers’ market where locals shop and share coffee at pavement cafés. Its sister village, Lombez, once visited by the Italian poet Petrarch in 1330, is built around its impressive brick church, Cathédrale Sainte-Marie, with its five-storey octagonal bell tower.

Winding through serpentine roads lined with plane trees, there are plenty of interesting villages to explore such as Simorre, whose church was restored by legendary architect Viollet-le-Duc, he who restored the famous medieval city of Carcassonne; or the classic bastide, L’Isle-en-Dodon. Tucked into the hills of Meilhan, you’ll find a memorial to the Maquis Resistance of the Second World War, then a leisurely drive on the D3 will bring you to the medieval jewel of Tillac, location for the movie The Three Musketeers.

If you head south towards the Pyrenees, you’ll find the wild landscapes of deepest Gascony, known as the Vic-Bilh, the ‘old country’. Its tangle of winding back roads crisscross the hilly terrain from one valley to another. Côtes-de-Saint-Mont, Pacherenc du Vic-Bilh and the Madiran AOC wine areas are worth separate visits, or schedule a stop at the Plaimont cooperative for tastings and vineyard tours.

Continuing west, the former keep of the 13th- century castle at Termes d’Armagnac rises a majestic 36m high. Heading north, the village of Nogaro is worth a pit stop if you’re interested in motorsports: its renowned racetrack, Circuit Paul Armagnac, hosts a full schedule of events including amateur driving courses, classic car rallies and truck racing.

The drive through the department of the Gers is a destination in its own right: the Bas-Armagnac countryside never fails to impress. The Domaine de Lagajan, just outside the village of Eauze, is a must. Here, under the shade of the domaine’s 600-year-old oak tree, you’ll enjoy the hospitality of the Georgacaracos family, who have been distilling Armagnac since the 18th century. Tarry a while for a dégustation. Inside the old house, which is now a museum, lies a remarkable collection of utilitarian items which has been preserved by the family.

An overnight stay at the charming 13th-century Château du Fréchou or 18th-century guesthouse Les Bruhasses will leave you rested for your journey back to Agen. If you are taking your road trip is in May or June be sure to stop at the Iriseraie de Papon, just 25 minutes from the train station. Here you’ll find a three-hectare iris farm with more than 4,000 varieties of irises in glorious full bloom.

From the Gare de Saint-Jean in Bordeaux, you’ll arrive less than two hours later at the train station in Mont-de-Marsan, the capital of the Landes département, whose centre is tucked neatly between the Douze, Midou and Midouze rivers. This is a region of contrasting landscapes: the verdant countryside inland and the seductive allure of the Atlantic coast offer completely different scenery. Which terrain to drive through first is completely up to you.

A short drive away is the hilltop village of Saint- Sever, whose 10th-century abbey church is a UNESCO World Heritage site. This architectural show-stopper has seven stepped apses, a beautiful choir stall and ornately carved capitals. The church is an important stop on the Saint-Jacques de Compostelle pilgrimage route and was rebuilt by the local bishops and abbots after the Viking invasions.

The historic market town of Orthez sits on the Gave de Pau river, which flows northwest. In medieval times criminals were tossed off the 13th-century Pont Vieux (old bridge). Château Moncade, built by the ambitious knight Gaston Fébus during the Hundred Years’ War, and its tower offer beautiful panoramic views of the rolling green countryside dotted with forests, fields, rivers and vineyards. Southeast of Orthez is the village of Jurançon, famous for its 1,000 hectares of AOC sweet and dry white wines. More than 60 domaines offer guided walks and tastings through their vineyards in July and August.

Head west towards the tip of the Pyrenees and the last coastal town in the southwest corner of France before Spain, Hendaye, where the Bidassoa river marks the boundary between the two countries. Park your car at the marina, and sail to Spain on the Navette de Hondarribia. Hondarribia is rich in architecture and gastronomy: the Santa Maria gates are the main entry to the hilltop forti ed village, site of the castle of King Carlos V and now an elegant Parador hotel; and on every corner the sights and smells of pintxos (Basque tapas) and gastro-wine bars charm the senses.

Back in France, the seductive landscape of the Atlantic’s Côte d’Argent will draw you to such seaside beauties as Capbreton, Soorts-Hossegor, Contis-Plage, and Moliets-Plage. Léon is without doubt one of the most beautiful coastal villages in the Nouvelle- Aquitaine region, full old half-timbered houses and flowery alleys. The Tuesday farmers’ market is superb.

The Lac de Léon gives way to the Courant d’Huchet Nature Reserve, a haven of beautiful fauna and ora with over 280 species of migrating birds. Past the small village of Uza, known as the ‘Pearl of the Moors’, and north to Mimizan-Plage, most of the medieval settlements along the coast were engulfed by sand from the legendary storms off the Bay of Biscay, leaving marshlands and moors festooned with pink and lavender heather, crisscrossed by lakes and rivers.

The unusual Écomusée de Marquèze in the village of Sabres is accessed by a delightful old steam train. It was the first eco-museum in France, dedicated to conserving endangered varieties of seeds, trees and animals. The site consists of authentic buildings showcasing the traditional way of life, including the tchanqués (old Gascon for stilts) used by shepherds to manage their flocks on the marshlands before Napoleon III ordered the planting of pine forests (now the largest in Europe) to stabilise the shifting sands.

Anyone who is nostalgic for the châteaux of the ancient regime will appreciate a visit to Château de Ravignan. Still in the same family, you will see original costumes, furniture and paintings and enjoy an Armagnac tasting in their wine cellar.

Our tour of some of the remarkable unknown gems in Gascony ends where it began, in Mont-de-Marsan. On a walk through the old part of town you can view the confluence of its rivers, or tour its contemporary art scene at the Centre d’Art Contemporain. Now that I’ve given you a taster of some of the off-the-beaten- path destinations in historic Gascony, let me wish you bon voyage, wherever your adventures may lead!