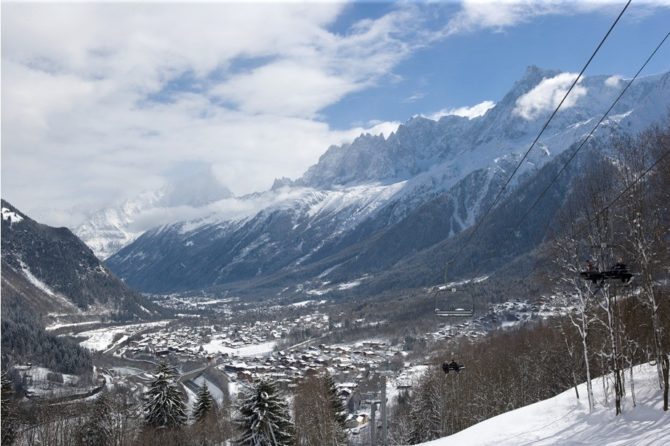 Chamonix-Mont-Blanc is the biggest and arguably the best ski area in Europe, and the superlatives don’t stop there. Situated at the foot of Mont Blanc, Europe’s highest peak, Chamonix boasts the world’s steepest lift-served skiable vertical drop—some 9,200 feet—as well as one of the world’s longest runs, a nearly 14-mile course through the Vallée Blanche.

Just south of Lake Geneva (Lac Léman) and easy to reach, Chamonix has been a favorite European ski destination since the early 20th century. The first adventurer to schuss down the slopes here did so in 1893, and by 1907 the sport had become so popular in the Mont Blanc area that one of the world’s first cable car systems, Les Glaciers, was built to take skiers up.

The overall area now boasts some 90 miles of runs, catering to all levels of ability, divided among five ski areas scattered across the valley: Brévent, Flégère, Argentière, Les Houches and Le Tour. For skiers, Chamonix really does have it all—powder fields, glacier skiing, mogul slopes and endless gentle runs for beginners and children. It is also a year-round playground, enormously popular in the summer months for hiking, climbing, water rafting, mountain biking and much more.

Another huge plus for Chamonix is the easy accessibility. Chamonix is an hour’s drive from Geneva, its nearest airport, to which there are dozens of daily flights from major US and international cities. From Paris, there are direct flights and trains to Geneva, Aix-les-Bains and Annecy, all of which are less than an hour and a half from Chamonix. Chambéry Airport, near Aix-les-Bains, also has direct flights to Chamonix during the winter ski season.

Given all its advantages, it’s not surprising that demand for property in the Chamonix area is high. Ski buffs looking for a chalet are naturally drawn to the area because of its great skiing and guaranteed late snow, while investors are attracted by its excellent rental potential throughout the year. Some 60,000 visitors flock to the Chamonix area in the winter months, 48 percent of them foreigners. The figure leaps to 100,000 in the summer months, highlighting the appeal of rental investment.

As in most other sought-after areas of France, real-estate prices have not suffered any dramatic declines in recent years, and in fact most sections of the Chamonix Valley are now experiencing considerable price hikes. According to Richard Deans, sales consultant at the real estate agency MGM,“buyers are back, and prices have risen by six percent in a year.”

And François Marchand, sales manager at Erna Low Property, says the price hike is here to stay. “We expect an increase in prices over the next three to four years, an average of 3 to 5 percent per year. Higher ski resorts like Chamonix benefit from better snow conditions, and properties will always have a higher demand from potential buyers.”

Prices in Chamonix are currently more than double the French national average, at €6,500 ($8,960) per square meter (nearly 11 square feet) according to the property website www.french-property.com. However, prices do vary considerably depending on the sector of the valley in which they are situated, as well as their style and size. The area most in demand is undoubtedly in or near the center of Chamonix itself, with its wonderful array of restaurants, bars and exclusive boutiques. But the bustling center is not the place to start looking for a spacious chalet—almost all the properties available in central Chamonix are apartments. A 28-square-meter studio apartment with an individual cellar is currently on the market for €138,000; a five-bedroom apartment in need of renovation, just ten minutes from the city center, is priced at €520,000.

For prospective buyers who value space more than speedy walks to the best restaurants, real-estate agents suggest a number of villages in the vicinity with excellent transport links to the center—among the most popular are Les Moussoux, Les-Praz-de-Chamonix, Les Bois and La Frasse. Not only are these villages noted for stunning views, charming atmosphere and the prodigious amount of sunshine they bask in during the winter, but they are also conveniently located close to cable cars.

Take the small village of Les Moussoux, for example, situated northwest of Chamonix on south-facing slopes, and also just over a quarter-mile from Plan Praz, the lift access to the Brévent ski area. Here a three-bedroom apartment with spectacular views of Mont Blanc is listed at €546,000.

Les-Praz-de-Chamonix is a quaint Savoyard village at the foot of the cableway to the Flégère ski area. Although it’s just a short drive from Chamonix, the village is very much its own place, with a church, several shops, hotels and restaurants, and it’s also the site of the world-class 18-hole Golf Club de Chamonix, designed by Robert Trent Jones. A four-bedroom chalet with views of Mont Blanc is currently being offered for €845,000. For those after something a bit bigger—and with major star quality—there is a newly built, eight-bedroom wooden chalet designed over six and a half levels, with a triple-aspect view of the Massif du Mont Blanc, with an asking price of €2,550,000.

Mike Braunholtz, sales director of the Prestige Property Group, advises his clients to look around the ski center of Les Houches, in the Chamonix Valley, for a varied selection of chalets and properties for sale.“Les Houches is less than four miles from Chamonix and it has an exceptional panorama of the peaks,” he says. “It’s made up of a number of hamlets spread over an area of 12,000 acres, with oratories, chapels, old bread ovens and farms bearing witness to its past. Those advantages are the objects of particular attention today.” The Prestige agency has a number of properties for sale in Les Houches, from a recently built four-bedroom chalet with an indoor swimming pool in the hamlet of Chavants for €1,495,000 to an 18th-century, seven-bedroom chalet in need of renovation, set in grounds of nearly a quarter-acre, going for €850,000.

Originally published in the December 2011 issue of France Today.