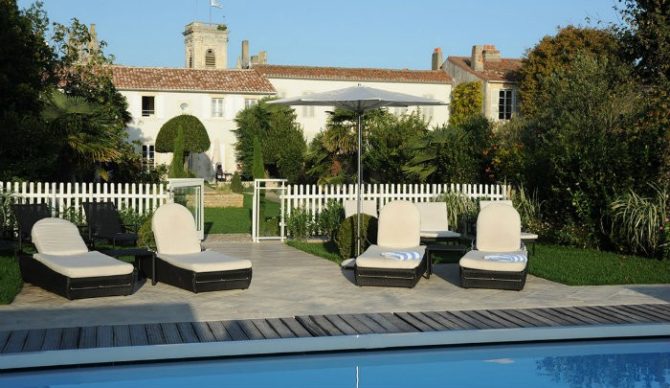 You really couldn’t ask for a better location for this gem of a hotel in Saint-Martin-de-Ré. Created from several historic quay-side townhouses, the Toiras directly overlooks the harbour, with its jolly assembly of fishing and pleasure boats and tempting harbour-side restaurants and shops.

Mornings here are quiet. Local shop-keepers head for work, captains and crew prepare their boats for the day ahead. Later, visitors start to arrive for the day: hiring bikes, walking the impressive ramparts and tasting the famous Martinique ice creams. By evening in summer the atmosphere is buzzing, the restaurants are busy, and people promenade along the quayside enjoying the seas-side holiday mood. All of these delights are on the very doorstep of the Toiras and if you are lucky enough to have a room overlooking the harbour, then you can dip into the sights and sounds at will.

As you would expect from a five-star Relais & Châteaux hotel, the overall comfort, bathroom and bedroom furnishings, and service levels are first class. But what sets the Toiras apart is the friendly and relaxed ambiance created by the welcoming staff. The équipe is headed by Pierre Gaillot who is charming and passionately knowledgeable about the region, as only a returning Charentais can be.  You feel quite at ease coming in from the beach or a bike ride in your t-shirts and shorts, and you can’t say that about every five-star establishment. The happy vibe starts at breakfast, overseen by the irrepressibly cheerful Dominic, and continues during the day when front desk staff are always on hand to answer your questions, make suggestions for your days out or point out the places to eat and those to avoid.

The vacation mood is set the moment you walk into the airy reception and lounge, which although decorated and furnished in the classical French style offers a surprising taste of the sea-side twist with its massive beams, rafters, and ceiling all painted a pleasing nautical shade of blue.   Attention to style and decorative detail are a trump card at Hotel Toiras where all the rooms and suites have been meticulously designed and crafted around historic writers, artists and figures from local history. For example, the Duc de Buckingham suite boasts Ralph Lauren wallpapers, an exotic wood floor, and a portrait of the infamous Duke (he was once the scourge of the 17th century French navy until he unsuccessfully besieged the island….which was defended by none other than French army marshal, the Marquis de Toiras). The Pierre Loti room is named after the 19th century French naval officer and novelist from the Charente-Maritimes region and here paisley fabrics and warmer colours remind visitors of the writer’s travels to the Far East.

In all there are nine suites and eleven rooms to choose from, so there is bound to be one that captures the imagination. Visitors from the U.S. might be tempted by the privileges of the Presidential Suite George Washington, an opulent testimony to the first President and his ancestor, Nicolas Marthiau, a citizen of Ile de Ré who migrated to the Eastern seaboard in the 17th century. (The recent voyage of the Hermione also reminds us of the strong historic links between this part of France and the U.S.). This 110 sq. m. suite boasts six full height windows overlooking the harbour, a classically designed lounge with open fire, a lavish bathroom and shower area, and a spacious bedroom with views.

The Ile de Ré is curious in that it caters superbly for traditional family beach holidays yet also attracts a sophisticated crowd from Paris and other Europeans seeking some refined sea-side pleasures, so there’s an influx of well-heeled visitors in the summer months. They often bring their little darlings with them, so for families and those looking for high quality accommodation away from the quayside, the owners of Hotel Toiras have since 2011 also offered nine rooms and suites in the Villa Clarisse, a beautifully converted town-house a few minutes behind the busy quayside.  The ambiance here is more like a relaxed contemporary boutique hotel with very elegant interior design based around cool whites, natural stone and wood floorings. A charming garden and swimming pool (also available to guests at the Hotel Toiras) complete the ensemble.

Saint Martin boasts plenty of choice for eating out but if you stay for a few days it’s definitely worth booking at La Table d’Olivia, the Hotel Toiras’s own restaurant. It’s an elegant room with just six tables, presided over by chef Thierry Bouhie, offering near Michelin standard menus – a little slice of refined fine-dining away from the hustle and bustle of harbour-side restaurants.

I’ve been all over the Ile de Ré, in and out of season, and it’s St Martin I always come back too. Now having savoured the ambiance of this fine hotel in the heart of the town, it will be hard not to stay here in future.