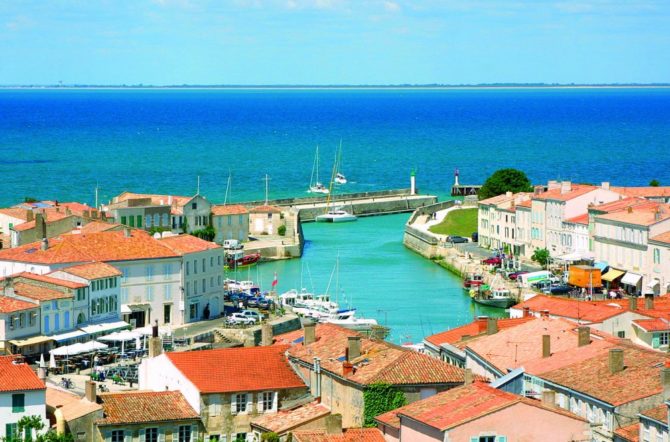 With its mild climate and its indigo sky—writer and painter Eugène Fromentin called it “an Egyptian sky”—you might think the Ile de Ré was a daughter of the Mediterranean. It juts out into the Atlantic between the Antioche and Breton straits like a raft, 19 miles long and two to three miles wide, edged with beaches of fine sand and punctuated by dunes, wild marshes and 10 tidy villages. No longer precisely an island, it’s been linked to La Rochelle by a bridge since 1988.

The real luxury here, first of all, is nature—the miracle of beautifully preserved landscapes. The green of cypress and pine forests and tufts of beach grass is set off in summer by the foamy white of Queen Anne’s lace and the mauve of sea lavender, before the crimson saltwort of the autumn. Wine is still produced here, as well as cognac and pineau des Charentes (an aperitif liqueur blended from white wine and cognac). Salt and fleur de sel are still gathered from the marshes using traditional methods, although the number of salt workers has sharply declined. The local oysters, cousins to those of Marenne and Oléron, are delicious. As is the pomme de terre primeur d’Ile de Ré, the spring potato with its delicate flavor hinting of hazelnuts, which became the first AOC (appellation d’origine contrôlée) of its type in France.

Paradoxically, the almost two-mile-long bridge linking Ré to the mainland, by charging a toll, has promoted a “civilised” type of tourism here, respectful of the environment. Two decades ago, Léon Gendre, mayor of the village of La Flotte and a fierce opponent of the bridge, led a real anti-concrete crusade to fend off indiscriminate building. Today 80% of the island is protected from development, and local communities continue to acquire property as it comes onto the market, to “freeze” it. Most of the island’s natural resources, including vineyards, forests and salt marshes, are now nature reserves.

To control the automobile invasion and “preserve the insular identity”—the winter population of 18,000 grows to 130,000 in summer—the island’s authorities have laid out more than 60 miles of bike paths, enforced a draconian building code, banned roadside advertising signs, limited camping sites (which grow more upmarket year by year) and deliberately left beaches without facilities.

This little paradise has its drawbacks: real estate prices are sky-high (up to €10,000 per square meter, about 11 square feet). And with the skyrocketing prices, local residents whose only inheritance was their land found themselves subject to the ISF, the impôt sur la fortune, or wealth tax.

A sort of reverse snobbery holds sway on the Ile de Ré, that of extreme simplicity and discretion. In communities little frequented by ordinary tourists, long-time summer residents practice what sociologists Michel Pinçon and Monique Pinçon-Charlot call l’entresoi (among ourselves). “At Portes-en-Ré, an island within the island,” they say, explaining their theory, “an exclusive group of people from the best areas of Paris, Bordeaux or Lyon, comes to enjoy the extreme pleasure of being together.”

A posh destination, Ré? Certainly. Among its regular vacation residents: former Socialist prime minister Lionel Jospin, grande dame of fashion Sonia Rykiel, writers Philippe Sollers and Régine Desforges, stage and screen stars Nicole Garcia, Nathalie Baye and Fabrice Lucchini. But the smartest resort on the Atlantic coast also remains accessible for a day, a week or a month—the range of hotel and rental accommodation is wide—for anyone who enjoys a seaside climate warmed by an ardent sun, and villages full of charm.

The unusual name Ré is derived from ratis, the word for fern in the Celtic language of ancient Gaul. For a long time the Ile de Ré owed its prosperity to wine and salt. In the Middle Ages, Cistercian monks settled on the island. They built the Abbaye des Châteliers, whose ruins can be seen on the road between Rivedoux and La Flotte. They planted the first vines, extracted salt from the sea and developed trade. From 1627 to 1628, when La Rochelle was controlled by Protestant rebels, it underwent a terrible siege at the hands of Louis XIII and Cardinal Richelieu. The English came to the aid of the city, Buckingham and his troops attacked the Ile de Ré, but they were soundly defeated.

To render the island impregnable, Louis XIV asked military architect Vauban to fortify the city of Saint-Martin-de-Ré. His star-shaped fortress was named a UNESCO heritage site in 2008. During the French Revolution it was used as a prison for refractory “political” priests. Later it was a transit stop for convicts being deported to prison colonies in New Caledonia and French Guiana. Among them, over the years, were Captain Alfred Dreyfus, unjustly convicted of spying in 1894 and eventually cleared in 1899; and the writer Henri Charrière, better known as Papillon, in 1931. Deportation to the penal colonies ended in 1938, and the Saint-Martin fort now holds prisoners condemned to long sentences. Moving the prison is still a subject of debate.

In the 19th century, the Ile de Ré was poor. Only the most eccentric people ventured there, first by steamer, then by ferry. In 1890 several family pensions (boarding houses), among them Le Chat Botté (Puss in Boots) in Saint-Clément-des-Baleines, were listed in the Guide des Petits Trous Pas Chers (Guide to Inexpensive Little Holes). Old postcards show island women wearing the traditional bonnet with extended sides framing the face; called a quichenotte, possibly from the English “kiss not”, since they were reputedly meant to discourage any advances from invading English troops. And they also show the island’s donkeys wearing trousers—front and back, checked or striped—to protect them from mosquitoes.

Since the 1950s the island has enjoyed a popularity that has never declined. Its 10 villages, which Pierre Loti described as “all chalky white, like Arab villages”, are easily visited. Everywhere you look are narrow lanes spilling over with hollyhocks, one-story houses topped by roofs of round tiles, with shutters in every shade of green, and enclosed gardens filled with laurels, mimosas and fig trees.

In Sainte-Marie-de-Ré, on the seaward side of the island’s eastern end, you must climb up the belltower of Notre Dame de l’Assomption church. From the walkway at the base of its Gothic spire you might spot an elegant flotilla of tofinous, the famous local sailing dinghies. And don’t miss a visit to the fish locks. These little stone walls, built in the 12th century, were meant to break the waves and are, in fact, very clever fish traps. In the shadow of the Chauveau lighthouse, you can join the many fishermen on foot who, at low tide, search for étrilles (velvet crabs), clams and winkles.

Then head for Le Bois-Plage-en-Ré. At the beach of Gros Jonc, you can surf to your heart’s content, try kite surfing or the newest rage, stand-up paddle surfing. The nearby town of La Couarde has one of the island’s best beaches, linked to Saint-Martin by a 3-mile bike path. Near Le Martray, a tiny isthmus that connects the small western end of the island to the larger southern end, the road narrows until it almost disappears.

Just beyond Le Martray is Ars-en-Ré, the old salt capital, marked by the slender black and white bell tower of Saint Etienne church. The port, at the end of an access channel called a fier (from the word fjord, recalling the island’s ancient occupation by Vikings) is strictly for pleasure craft. The days when Ars supported hundreds of salt workers are long gone, but relics of that era remain in their well-kept little houses with corner turrets, and in the fortified church.

At Saint-Clément-des-Baleines, where history recounts that long ago whales used to wash up on the shore, don’t even think of skipping the climb up the 187-foot lighthouse. From the top—after 257 steps on the circular staircase—the sublime view includes the immense beach of La Conche (where director Ken Annakin filmed several scenes for The Longest Day), the marshes of Fier, the forest of La Combe à l’Eau and stretches as far as the rocky heights where the little lighthouse of Le Baleineau stands.

Heading for Les Portes-en-Ré, stop for a guided visit of the Lilleau des Niges Nature Reserve, a sanctuary for thousands of birds. Les Portes is the island’s northernmost point. It’s also called “the end of  the island”. It’s hard to imagine, but this spot, now a refuge for the wealthy, happy few, was for a long time the island’s poorest area.

Another excursion, this time on the landward side of the island, leads from Rivedoux to La Flotte, Saint-Martin and Loix-en-Ré. La Flotte is well worth a detour, with its fishing port and ship chandlers, its pedestrian streets and ravishing medieval market. Until the early 20th century, this sizeable town supported a large tuna-fishing fleet. Superb private mansions attest to the even earlier success, in the 18th century, of the town’s ship owners and merchants.

Saint-Martin remains the island’s capital, and all its principal streets lead to the center of activity on the quays. Hotels, restaurants and trendy shops abound. Be sure to visit the Musée Ernest Cognacq, a museum of local history and art, which often hosts temporary exhibitions.

It is perhaps at the small village of Loix-en-Ré that the isolation of the islanders is most noticeable. Situated off the main road, the last of six tide mills still stands: set in motion by the movement of the water, the mills were used to clean the salt before it was ground. There, between the ocean and the salt flats, with a flock of white herons flying past, you reach land’s end, the Pointe du Grouin, where the great wind blows in solitude. And freedom.

By car, via the toll bridge from La Rochelle. By train from Paris to La Rochelle, with bus service from the La Rochelle train station to all the island villages. website

Les Vignes de la Chapelle On the south side of the island, surrounded by vineyards, a delightful seaside hotel set up like a tiny hamlet of attached “lodges” or cottages around the swimming pool, with views over the islands of Aix and Oléron. 5 rue de la Manne, Sainte-Marie-de-Ré, 05.46.30.20.30. website

Le Sénéchal. Right in the center of town but only a short walk from the beach, a beautifully decorated hotel with 22 rooms and suites along with small rental houses, flowering patios, fireplaces, beams and skylights. 6 rue Gambetta, Ars-en-Ré, 05.46.29.40.42. website

Le Bistrot du Marin Best to arrive early—it’s always crowded and doesn’t take reservations, but the service is quick and the steaks and profiteroles are worthy of their reputation. The terrace faces the port, the ambiance is relaxed, the food is good and the prices reasonable. 10 quai Nicolas Baudin, Saint-Martin-de-Ré, 05.46.68.74.66. website