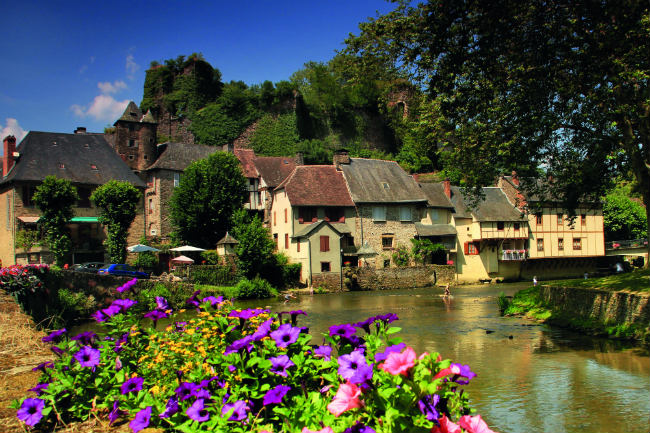 If you really want to get off the beaten track in France, head for the rural and little-populated region of Limousin, suggests Dominc Bliss. Discover medieval hilltop villages, imposing châteaux and swathes of stunning scenery…

Back in the old days, the good residents of Limousin were famed for wearing huge, hooded cloaks. This practice kept them nice and warm in winter but unfortunately it has also ensured that they will eternally be confused with a large style of American car. Yes, we mean the limousine, of course.

There are two stories explaining the origin of the name of the car. One suggests that the soft, folding roof of early carriages and automobiles resembled the Limousin residents’ hooded cloaks. The other maintains that the original limousine drivers donned large cloaks to protect them from the elements. Whatever the etymology, one thing is certain: you won’t see many limousines in Limousin. Not the motorised versions, anyway.

That’s because this is one of the most rural areas of mainland France and officially the least populated – less than three-quarters of a million at last count. Comprising the three departments of Creuse, Corrèze and Haute-Vienne, it used to be an official region of France before it became subsumed into the much bigger Nouvelle-Aquitaine in the great administrative shake-up last year. It’s named after the Celtic tribe, the Lemovices, who long ago were based in what is now Saint-Denis-des-Murs, in the Haute-Vienne. Slap bang in the centre of France, Limousin sits mostly atop the Massif Central, affording it lots of beautifully rolling hills, lush woodland, verdant river valleys (including some of the Dordogne, the Charente and the Vienne), farmland as far as the eye can see, and even a bit of mountain. The lowest land (around 250 metres above sea level) is found in the northwest, past Bellac, while the highest (around 1,000 metres above sea level) is in the southeast, out towards the long string of volcanoes in the Auvergne. 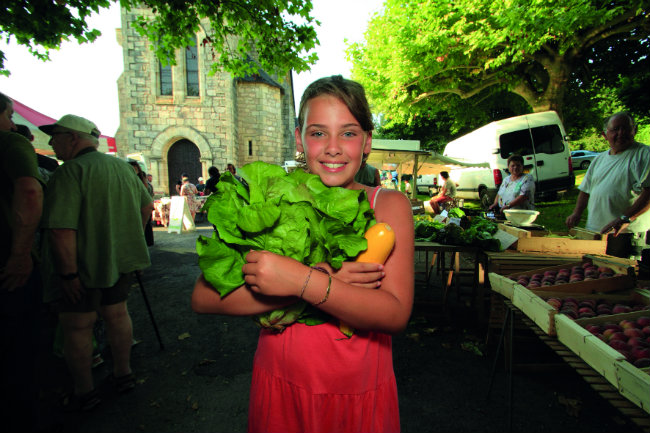 There aren’t large cities here, and that’s part of the region’s charm. Limoges, west of the region’s central point, is the biggest with 140,000 inhabitants, while in the north there’s Guéret, and in the south Tulle – global capital of accordions! – and Brive-la-Gaillarde, with its golden sandstone central village. Thanks to its university, Limoges is the only place in the entire region where you’ll find anything approaching nightlife. Elsewhere it’s distinctly sleepy, to say the least, even during the summer months. Many of the larger towns have attractive street markets where you can indulge yourself in the amazing local farm produce. But elsewhere you’ll feel isolated. In some areas, if you stick to the back roads, you’ll struggle to spot more than a handful of passing cars all day. This is real rural France at its most glorious.

Despite the tiny population, however, there’s plenty of cultural life to keep you occupied. Limoges is world-famous as a centre for fine porcelain and enamelware. It’s thanks to a discovery made back in 1768 when kaolin (a rock containing fine, white clay, perfect for making porcelain) was unearthed at a village 20 miles south of Limoges called Saint-Yrieix-la-Perche. Before this, kaolin had been imported at huge expense from Asia. Before long, Limoges’s artists were knocking out local porcelain to rival anything the Chinese could produce. Nowadays much of France’s porcelain is still manufactured in Limoges. You can see some of the finest examples at the Musée National Adrien Dubouché and the Maison Bernardaud. Wander round town and you’ll spot porcelain and enamel tiles on the sides of buildings pretty much everywhere you look. (Oh, and a quick note on translation: the French for enamel is émail – nothing to do with the Internet.) 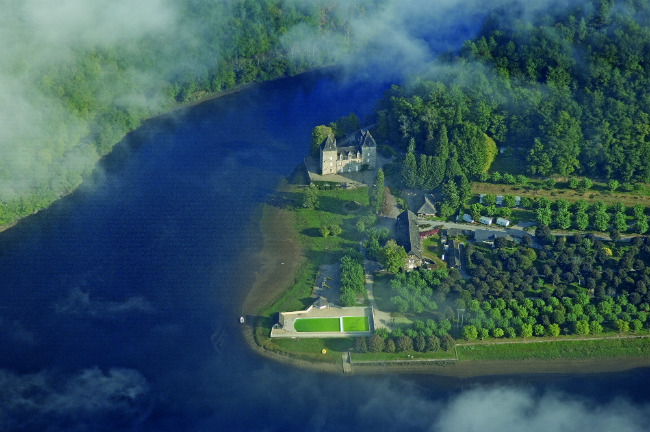 Limoges is also famous for its basketball team. Yes, really. If you happen to be in Limoges on the night of a basketball match, do your best to procure tickets for local side Limoges CSP. These guys are legendary. In the 1980s and 1990s they were among the very best clubs in Europe. Even now they regularly shine in France’s top league, the LNB Pro A. The atmosphere at home matches approaches the level of American NBA. 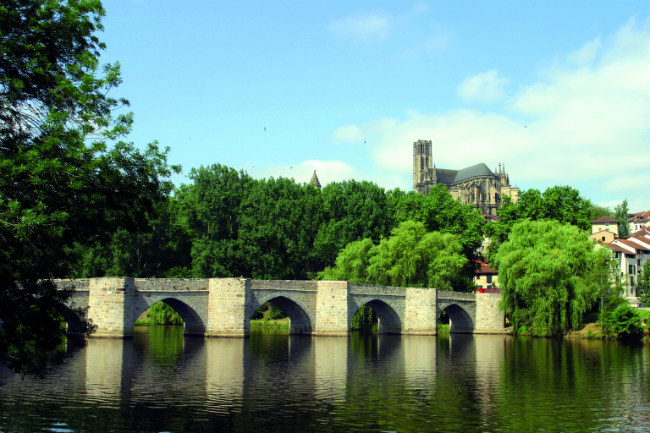 Try to arrive in Limoges by train. The superb Art Deco railway station, Gare de Limoges-Bénédictins, is breathtakingly beautiful and without doubt one of the finest in Europe. Opened for business in 1929, it spans the railway lines rather than sits next to them, as  most stations do. Look out for the grand copper dome – which burnt down and was rebuilt in 1998 – the glorious carved frescoes, and the 60-metre-tall four-faced clock tower (this is one city where you needn’t wear a watch). In summer, take the old-fashioned Chemin de Fer Touristique Limousin- Périgord steam train. Reservations are essential. 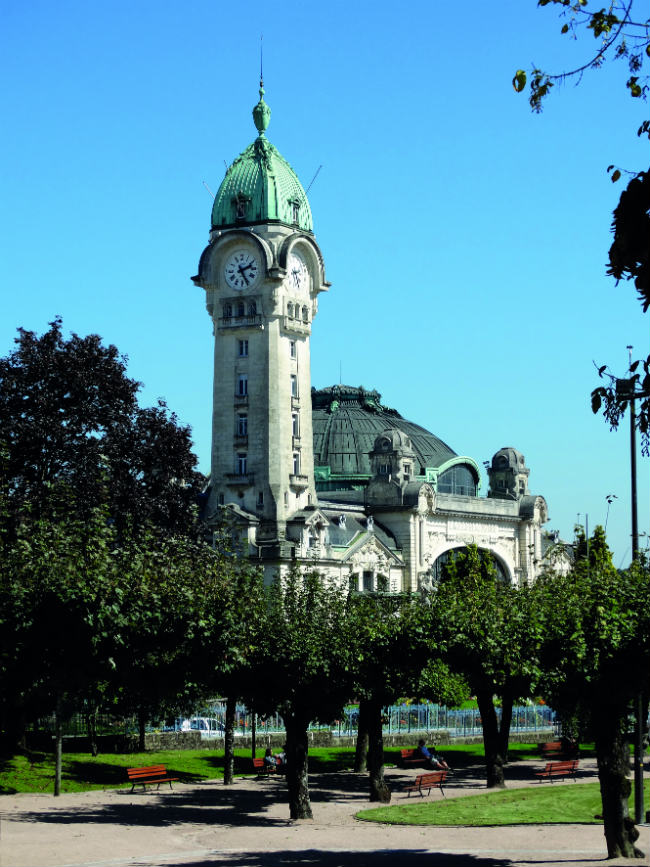 East of Limoges is Aubusson, home for the last 500 years to some of France’s most famous tapestry– and carpet-producers. Whether you’re a textile fan or not, sooner or later you’ll see one of these tapestries adorning the wall of a museum or public building.

West of Limoges is Saint-Junien, the region’s leather tanning centre. Here you can find gorgeous gloves (at the Agnelle workshop), bags and belts (at Daguet), plus all sorts of leather goods (at Le Tanneur et Cie).

The leather comes from the quite beautiful Limousin cattle, which substantially outnumber humans in this region. Chestnut-red, and sporting lovely horns, they also supply the steaks which many locals thrive on. 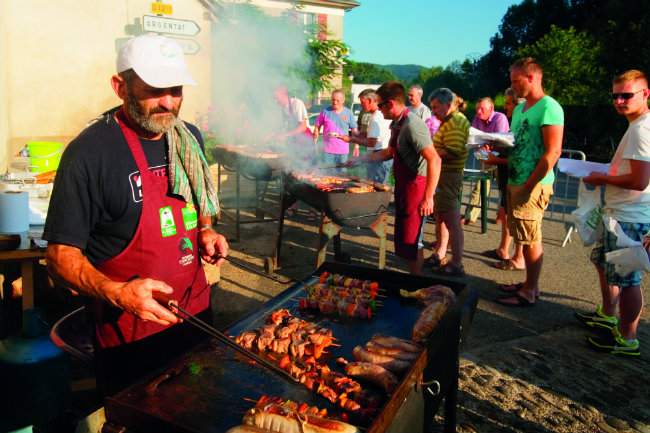 Another traditional craft that Limousin is famous for is the production of oak barrels for cognac and wine storage. The numerous oak forests dotted around the countryside have for centuries provided the wood for these barrels. In fact they’re so perfectly suited (something to do with drawing out tannins and imparting a vanilla flavour) that cognac distiller Rémy Martin has secured a monopoly on the wood.

The good people of Limousin know how to party, too. As with much of France, most festivals tend to take place in the summer months. While each village has its small-scale celebrations, there are a couple of biggies. Classical music and opera fans will love the Festival de la Vézère, which this year runs from July 12 until August 22 at various venues across the Corrèze department. For sport and music there’s Brive Festival, in Brive-la-Gaillarde from July 20 to 29. 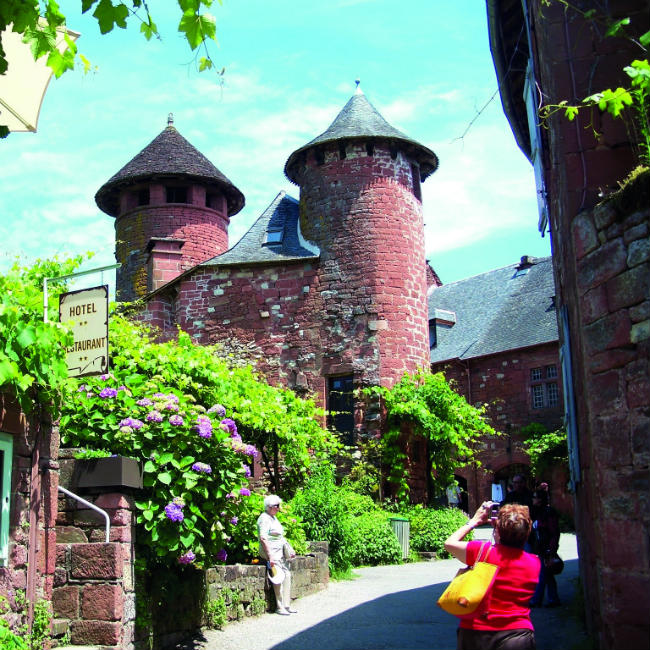 All across Limousin there are dozens of perfectly preserved medieval towns and villages – some on top of hills, others nestled in valleys – which merit at least a day trip: Solignac (with its 12th-century church), Uzerche (with its turreted houses), Aubazine (home to the orphanage where Coco Chanel grew up), Tulle (home to France’s last accordion factory), Gimel-les-Cascades (and its three huge waterfalls), Turenne (and its château perched on an outcrop), Collonges-la-Rouge (and its bright red sandstone alleyways), Beaulieu-sur-Dordogne (and its 12th-century Abbaye Saint-Pierre), Rochechouart (and its meteorite museum, celebrating the enormous rock that slammed into the earth here two hundred million years ago) and Oradour-sur-Glane (a ruined town that was the site of a horrific massacre by the SS in World War II).

The latter is a very grim, very sad and very poignant place to visit. Back in 1944, after learning that an SS officer had been held captive in the town, the Germans killed a total of 642 people, including 205 children. After the war Charles de Gaulle decided the village should never be rebuilt – a memorial to the cruelty of the occupying army. Today it is still a ghost town. Entry is via the Centre de la Memoire.

One way of ticking off many of Limousin’s towns and villages is to follow La Route Richard Coeur de Lion. This 180km route links up 19 churches, châteaux and villages across the Haute-Vienne. It’s so-called because Richard the Lionheart, bless him, waged a fair few bloody campaigns here in the 12th century before meeting his maker courtesy of a crossbow in 1199. 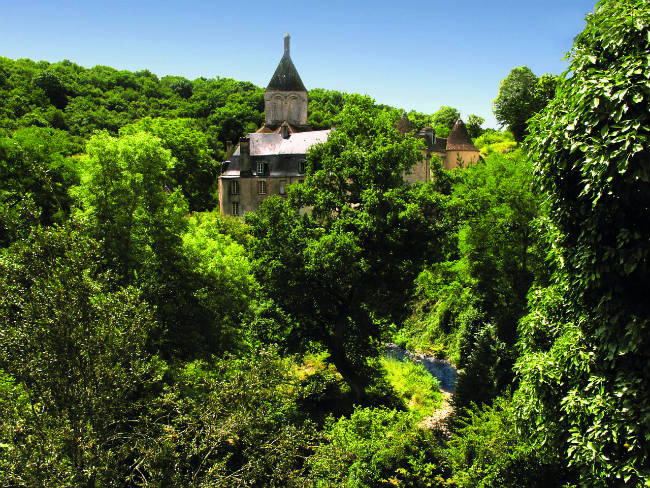 Many famous leaders boast connections to the region. Three medieval popes (Clement VI, Innocent VI and Gregory XI, if you must know) were born here. Several generals, a clutch of revolutionaries and Résistance fighters, and an uncomfortable number of politicians have strong family links, too, including Jacques Chirac, François Mitterrand, Jacques Delors and François Hollande, who once represented Corrèze in the National Assembly.

But to find the real soul of Limousin, you need to head out of its towns (since they’re so small, that doesn’t take long) and into the countryside. With such a small population and so much open land, the opportunity for outdoors sport and leisure is wonderful.

If you want a real taste of Limousin nature, head to the southeast of the region, to the Corrèze department. Here you’ll find a glorious section of the River Dordogne snaking past the towns of Bort-les-Orgues, Bassignac-le-Haut, St-Martial-Entraygues, Argentat and Beaulieu-sur-Dordogne. In fact it’s so glorious that the whole valley has been granted UNESCO status.

This is really not surprising. Every few kilometres there’s an achingly beautiful view to drink in: medieval hilltop villages, imposing châteaux, steep valleys, high cliffs and promontories, gorgeous gorges, luscious lakes… In fact, before you visit Limousin, make sure you have plenty of memory space on your camera for photos. You’re going to need it. 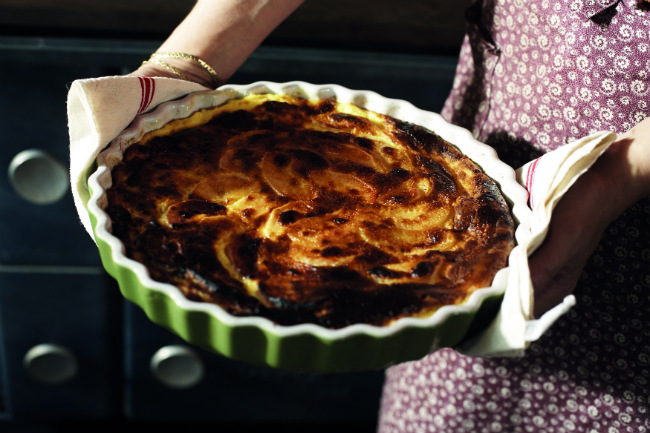 The best regional dishes all across France tend to be fairly rich, but nowhere is this more true than in the country’s agricultural heartland, Limousin.

We all know the French love their food to be rich. Well, here in the centre of France they like it richer than most. With Limousin cuisine, a good place to start is with the beautiful chestnut-red Limousin cattle that provide some wonderful beef. Look for the red Blason Prestige label as a sign of quality, and be sure to eat your steaks à point. Otherwise try the baronet lamb or the cul noir pork from the area around Saint-Yrieix – so called because its hindquarters are black. In Brive-la-Gaillarde you’ll occasionally see cold meat served with a violet-coloured mustard made from red grapes, mustard seeds, vinegar and spices. Be prepared for a bit of a kick. 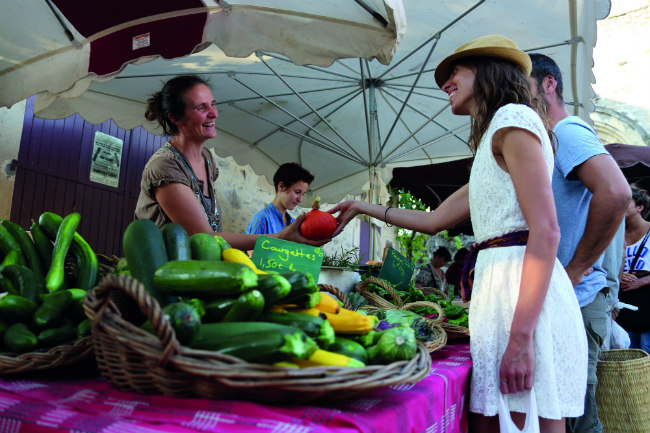 Finish off your meal with a traditional clafoutis cake. The best ones are cooked with cherries, but never pitted since the stones give it a unique taste. And a quick note on the Limousin apples: they’re so good that they have their own AOP (appellation d’origine protégée). There are more than 5,000 hectares of orchards dedicated to growing them.

Now for the famous chestnuts… At the beginning of the 18th century, 40 per cent of Limousin was planted with chestnut trees, making the nuts a staple food. There are fewer trees nowadays but you’ll still find chestnuts are a popular food, and they are prepared in just about every way imaginable. 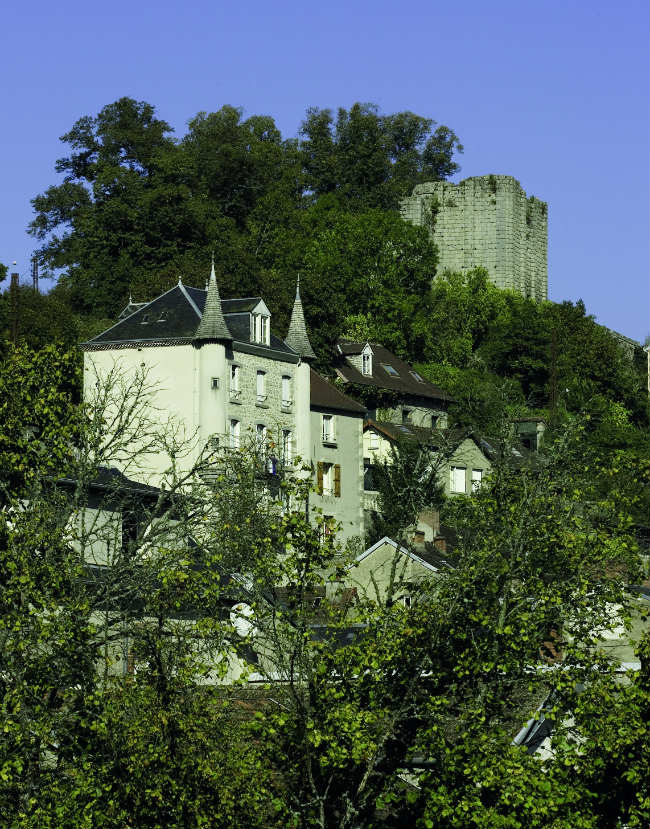 Aubusson is particularly famed for its textiles. Photo: CRT Limousin

Previous Article Dedicated to Women, Fraternité & the Rebirth of a City: The Nice Jazz Festival
Next Article A Complete Guide to Burgundy: Venture Beyond the Vineyards