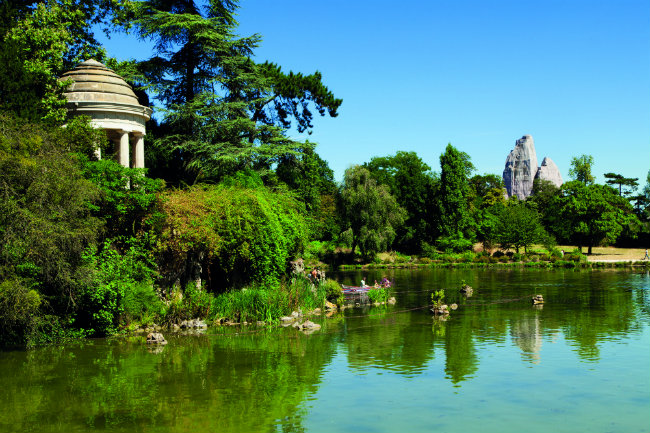 The eastern ‘Lung of Paris’, the Bois de Vincennes is a haven for wildlife and a playground for Parisians. Jennifer Ladonne explores its manifold delights

Though Paris was a major instigator (and indeed the host) of the historic climate accords of December 2015, and is a notable champion of re-greening projects and urban environmental initiatives, the City of Paris proper actually has less parkland than almost any other European metropolis, with just 62 square feet per inhabitant – compared with Berlin’s 269, Rome’s 345, and London’s impressive 484 square feet per capita.

This fact probably goes a long way towards explaining why Parisians consider the two sprawling woodlands that flank the capital to the east and west – the so-called “lungs” of Paris – to be so important to life in the city. The Bois de Boulogne is the better known, but the Bois de Vincennes is actually the larger of the two, covering an area three times the size of New York’s Central Park. It is also the more bucolic; its woods and gardens, fields and lakes give visitors the impression of being somewhere far from the city, though it takes just 15 minutes to reach its gates from central Paris.

Parisians hungry for fresh air and quiet flock to this wooded hideaway. Closed to cars, except along a few of its wider avenues, and laced with miles and miles of shaded walking paths, the park welcomes 11 million visitors a year, to cycle, boat, fish, jog, stroll, picnic and attend open air concerts. Yet to tourists, curiously, this glorious park remains relatively unknown. 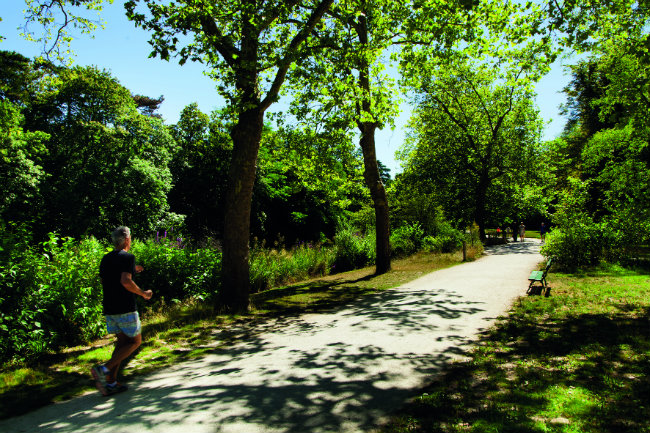 Like the Bois de Boulogne, its western cousin, this lush terrain to the east of Paris, bordering the 12th arrondissement, was set out in the 12th century as a royal hunting ground. Its 14th-century castlekeep, now France’s best preserved medieval fortress, was a royal residence for 500 years, and its graceful Sainte-Chapelle – the younger twin of Sainte-Chapelle on the Île de la Cité – briefly housed relics of the True Cross. It was only when Louis XIV started the process of moving his court to Versailles in the 1660s that Vincennes, along with the king’s other – most unloved – dwelling, the Louvre, relinquished its royal function.

After briefly housing the first Sèvres porcelain works, the Château de Vincennes was transformed into a prison, whose more illustrious inhabitants included the Enlightenment philosopher Denis Diderot, briefly imprisoned for his “heretical” writings, and the Marquis de Sade, who spent seven years here (his cell, no. 6, can be visited) from 1777, before being transferred to the infamous Bastille. 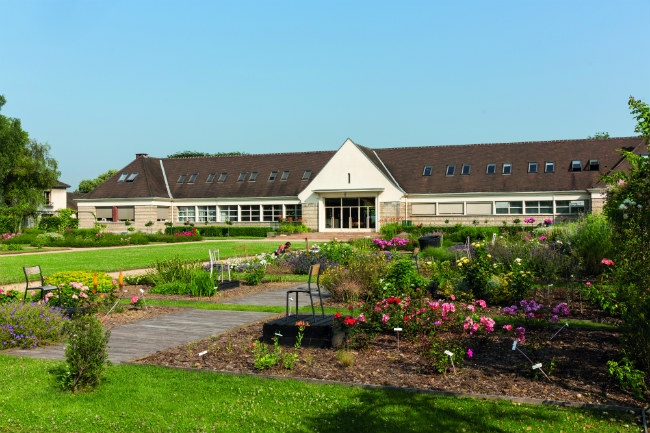 In 1917, Mata Hari, convicted as a German spy, was imprisoned in the château and executed in its deep moat, by then long dry. Here too, towards the end of the Second World War, the Germans murdered 26 Resistance fighters and police in the same grassy moat and threw their bodies into a common grave nearby. Though Louis XV opened the park to the public in the 1730s, setting out some of the leafy avenues that are still in use today, the modern park was created in the 1860s under Napoleon III.

Charged with the task of overhauling Paris’s cityscape, Georges-Eugène Haussmann developed the Bois de Vincennes as a place of leisure for Parisians in the ‘British style’. Wide boulevards were cut through the rambling wooded areas and three parcels of land adjacent to the park were annexed to circumvent the military barracks and to create the Bois’s principal lakes: Lac Daumesnil, Lac de Saint-Mandé and Lac des Minimes. 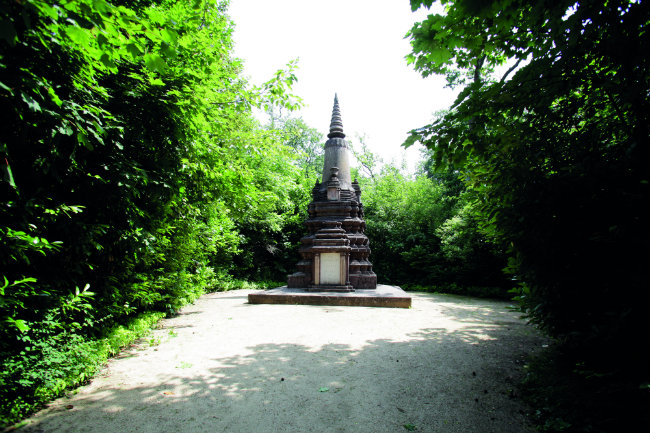 Yet, though the multi-layered park bears many traces of its lively history, it is the cultural events that have been held here that have left the greater impact on Parisian life today. The Bois de Vincennes hosted more than half of the events of the 1900 Summer Olympics, including a handful of sports that have since been dropped from Olympic rosters: cricket, croquet, tug-of-war and balloon racing. All these events were held at the legendary Cipale Vélodrome, whose recently-restored stands were designed by none other than Gustave Eiffel.

Reopened in 2015 after a major renovation, La Cipale is still considered the best cycling course in Île-de-France, and its many supporters are pushing for the track to reclaim its status as the finish line for the Tour de France; as it was between 1968 and 1974. The Bois de Vincennes is also being groomed as a key site for the 2024 Olympics. 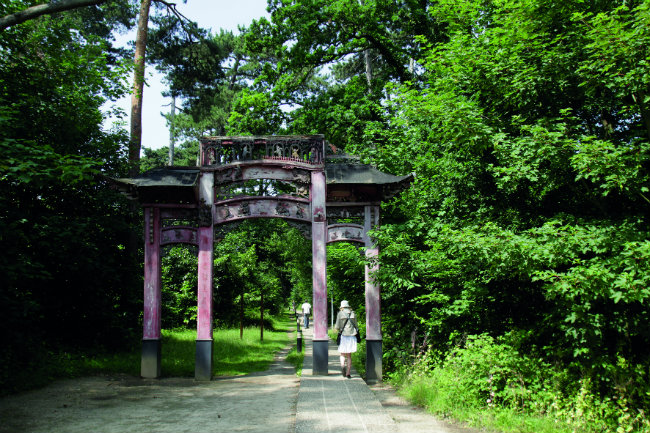 Cocktails and dinner, accompanied by thundering hooves and a view of the races at the historic Vincennes Hippodrome de Paris, where more than 1,000 horse races are held each year, is a favourite Parisian pastime. The Hippodrome, flanked by the arboretum, a farm and petting zoo and the Paris school of horticulture and landscaping, is reachable by RER A (Joinville-le-Pont station). 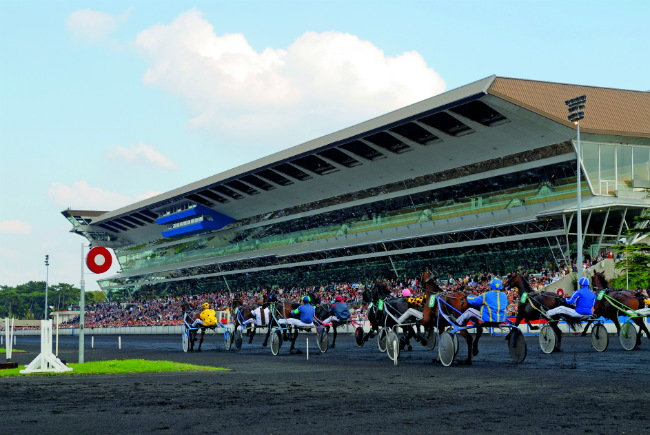 Visitors entering the park at the Porte Dorée gate, in the 12th arrondissement, will spot the dazzling vestiges of the Paris Colonial Exhibition of 1931; the event that left the most indelible mark on the grounds. A centrepiece of the prestigious event, the Palais de la Porte Dorée is an Art Deco gem decorated with superb bas reliefs depicting scenes from France’s many colonies, and is the home of the Aquarium Tropical du Palais de la Porte Dorée. In 1960, the building became the Museum of African and Oceanic Art, whose extensive collection formed the basis of the Musée du Quai Branly when it opened in 2006. It now houses the Musée National de l’Histoire de l’Immigration, as well as the dusky, rarely-crowded aquarium – a magical place to visit and one beloved of generations of Parisian kids.

The legacy of 1931 is just as magnificently, if somewhat incongruously, conserved in the extraordinary Grande Pagode, one of Europe’s principal Buddhist temples, famous for its 30-foot-high golden Buddha (containing relics of the historical Buddha). Lodged in the former pavilions for Cameroon and Togo, the temple is distinguished by a conical slate roof in the African style and is open to the public on Buddhist festivals. 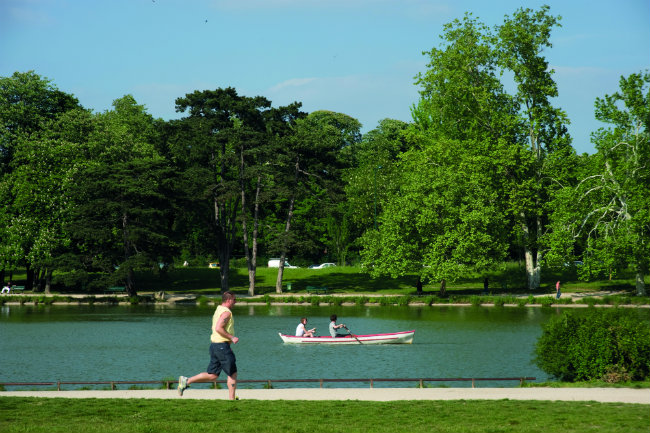 The Parc Floral de Paris, one of the capital’s four botanical gardens, and by far the largest, is also its loveliest. Tucked away among its 86 acres of rolling hills, grassy fields, woods and flower gardens are pavilions for bonsai and cacti, a butterfly house and children’s library, and dozens of specialised gardens: a medicinal herb garden, exotic fern beds, a winter garden that blooms all year round and an apiary.

In spring, hundreds of azaleas and rhododendrons bloom under towering umbrella pines. Special beds host Paris’s largest tulip display in spring and a dahlia exhibit in autumn. At the far end of the park, a sprawling playground offers towering slides, swings, a train ride, rope climbs and play structures, as well as Paris’s only accrobranche tree-top adventure park. 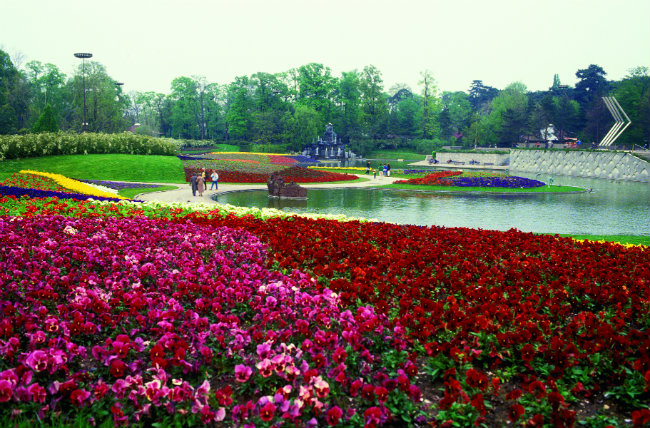 Music lovers flock to the Parc Floral in summer for the prestigious Paris Jazz Festival, held in the soaring outdoor amphitheatre. The festival runs for six weekends in June and July and boasts a line-up of the world’s best jazz musicians. Hot on the heels of the Jazz Festival, classical music fans can grab a blanket and a picnic lunch and relax to the strains of Classique au Vert, Paris’s summer classical music festival, which runs from the first weekend in August until midSeptember. (If you don’t want to picnic, the Parc Floral offers two cafés for a sit-down lunch or afternoon tea.)

Dogs and bicycles are not permitted in the Parc Floral, and though in the summer months you can rent bicycle carts for up to four people, its acres of leafy lanes and gardens are really best explored on foot. 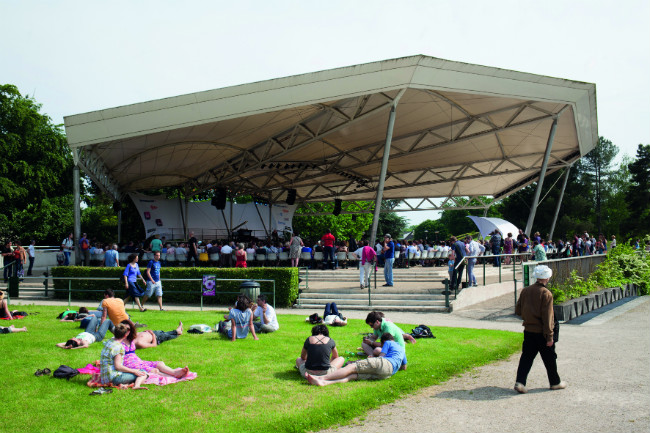 Butting up to the Lac Daumesnil, the Parc Zoologique de Paris, which reopened in 2014 after renovation, is perhaps France’s most spectacular zoo. Grouped into five biozones – Madagascar, Guyana, Europe, SahelSudan and Patagonia – many of the 125 species of animals represented here wander free in the open, so you can get up close to giraffes, jaguars, wolves, rhinos, walruses and sea turtles, as well as birds, reptiles and exotic insects. Between the zoo’s two restaurants visitors have the choice of a sit-down lunch or a quick sandwich, salad or pizza.

The Bois de Vincennes is a walker’s and cyclist’s paradise: its 2,500 acres of woodlands are crisscrossed by more than 50 miles of biking and walking paths, through woods, around lakes, and to its many gardens – including the Asian-themed gardens of the Jardin d’Agronomie Tropicale at the park’s eastern edge, next to the Lac des Minimes. This is another vestige of the Colonial Exhibition of 1931 and still harbours Chinese bridges and arches and some exotic plants transported from Asia among its lawns and gardens. 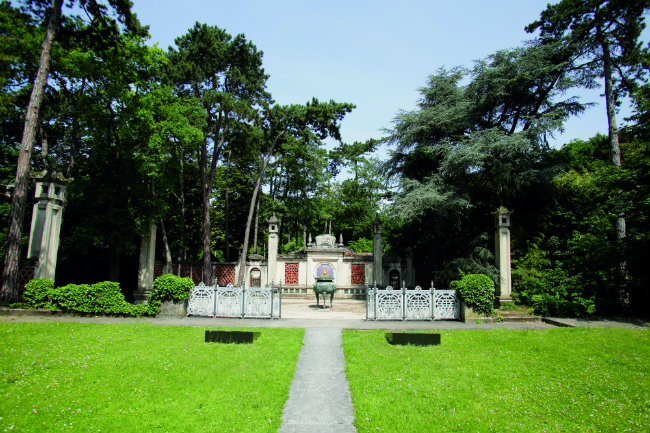 Bike-sharing stations operated by Vélib’, the city’s self-service bicycle rental system, can be found at the Paris side of the park, at the Porte Dorée; in Vincennes near the château; and in the park itself, at the southern end of Lac Daumesnil. If you have rented your bike in the centre of Paris, you can follow the Coulée Verte René-Dumont (also known as the Promenade Plantée) all the way to the entrance of the Bois at Porte Dorée.

The park also has more than five miles of streams, and boat rentals are available on both the Lac Daumesnil and the Lac des Minimes. Lac Daumesnil’s two islands – the Île de Reuilly and the Île de Bercy – are connected to the main park by a bridge on the lake’s south side and are fun to explore, with a charming Classical-style temple to visit and a café to relax at. Construction is underway for a bathing area and beach at Lac Daumesnil, set to open next spring. 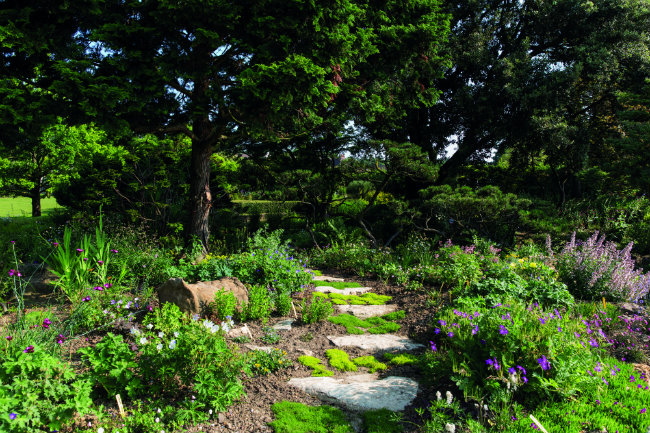 Set in a wilder area in the northeastern reaches of the Bois, the Lac des Minimes encompasses three small island wildlife preserves. Though these are reachable by boat, they are all densely wooded, and disembarking is not encouraged. You can, however, lounge at the small outdoor café at the lake’s northern edge after enjoying the many biking and walking paths through the woods flanking the lake. This is a favourite spot for birdwatchers, who can easily spot the majestic héron cindré – the grey heron – and, if they are very lucky, the iridescent plumage of a kingfisher.

GETTING THERE: The entrances to the park from Paris are at the Porte Dorée (Metro line No. 8), best for accessing the aquarium at the Palais de la Porte Dorée, the Lac Daumesnil, the Grande Pagode and the Parc Zoologique. You can also rent a Vélib’ bike there to explore the rest of the park. To see the Château de Vincennes and the Parc Floral, take line No. 1 to the terminus station, Château de Vincennes, which exits in front of the château. The château can be visited seven days a week, though the chapel is closed for renovations until 2018. The Parc Floral is easily accessed from the château’s rear exit. Or, if you’re not visiting the château, it’s about a 10-minute walk from the métro.

There are several cafés, and a Vélib’ station, at the métro exit for provisions or a quick breakfast or lunch. There are also two cafés in the Parc Floral. 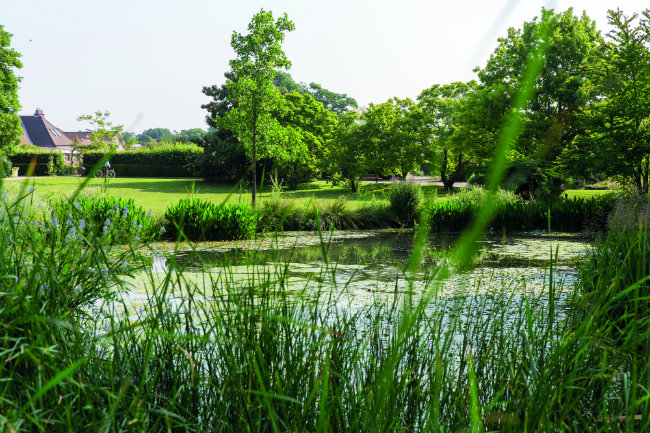