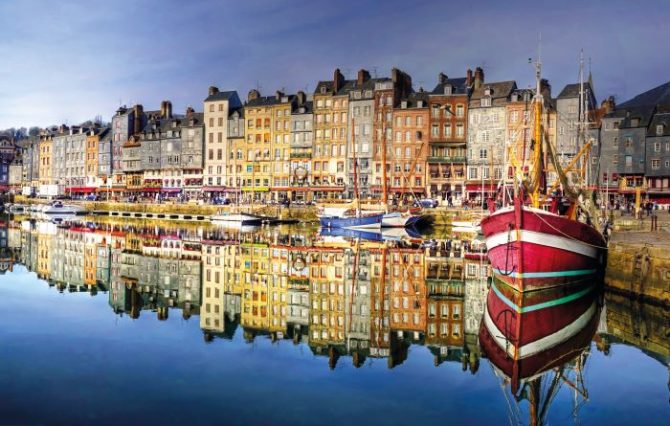 With its long sandy beaches, lush interior and rich history, Normandy has always offered an idyllic French fix. But this year, Gillian Thornton finds plenty of new reasons to visit too.

Cruise into Caen-Ouistreham with Brittany Ferries and admire the shores of Ouistreham and Lion-sur-Mer as they curve westwards in a tantalising arc of golden sand. Families relax over picnics, a far cry from the events of 1944 when this tranquil spot was codenamed Sword Beach, and Allied soldiers – my father amongst them – landed here at the start of Operation Overlord.

Today, Normandy’s five D-Day beaches – Utah, Omaha, Gold, Juno and Sword – are once again places to relax and have fun. But for many, they bring back poignant memories. Our family was lucky. My 20-year-old father survived the war, met my mother, and was able to tell us his story, but so many Allied troops died on Normandy’s beaches with no permanent memorial. 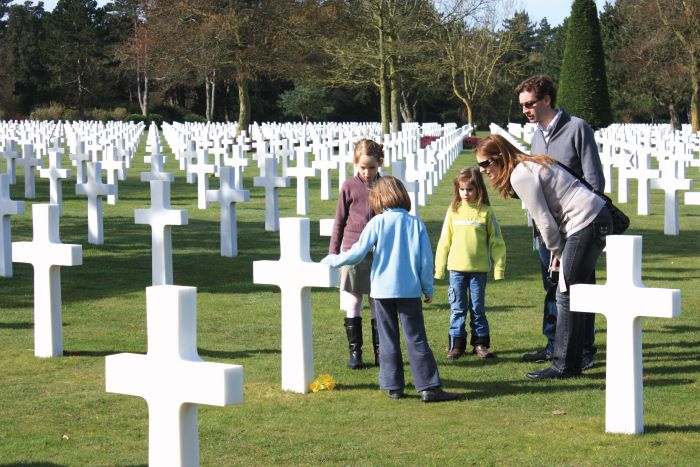 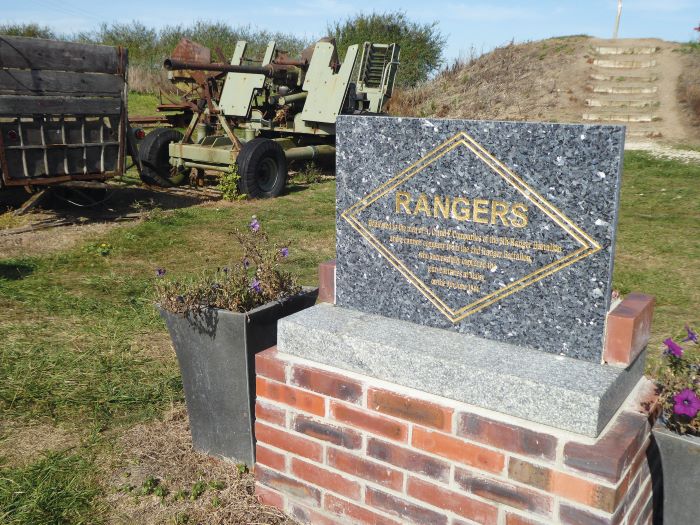 This year, however, the British Normandy Memorial will be inaugurated at Ver-sur-Mer on June 6, 77 years after the events of D-Day, or Jour J to the French. Built on the hillside above Gold Beach, the columns are inscribed with the names of 22,442 servicemen and women who lost their lives during the Battle of Normandy between June 6 and August 30, 1944. Also recorded are the men and women from other nations around the world who fought under British command or who were attached to the British armed forces, as well as members of the British Merchant Navy and civilians in France.

This summer will also hopefully mark the start of a friendly invasion of France by overseas holidaymakers after the travel restrictions of the past year.

Normandy has been closely linked to England since William, Duke of Normandy arrived in Hastings in 1066 to stage a successful takeover bid. America too can claim historic ties: Walt Disney’s ancestors were from D’Isigny in Calvados and counted themselves amongst the Duke’s most loyal supporters. 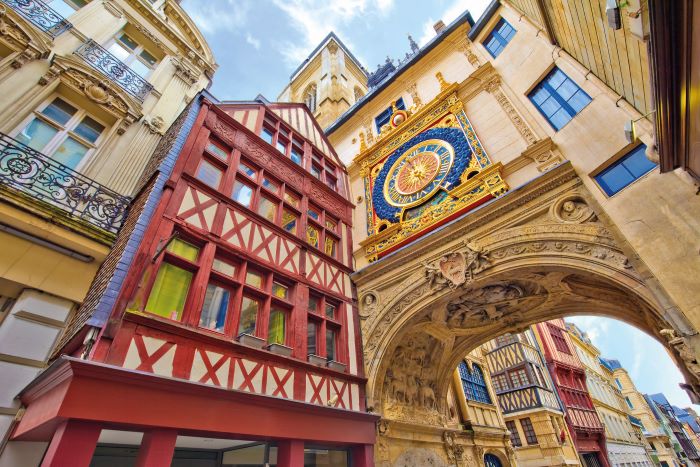 Normandy’s iconic attractions never lose their charm: the sandy beaches, wooded valleys, and sculpted chalk cliffs beloved by Impressionist painters such as Monet, Sisley and Pissarro; heritage towns like Caen and Rouen, Honfleur, Bayeux and Dieppe; and the lush bocage landscape of apple orchards and meadows, grazed by Normandy’s native brown-and-white cows and the finest of equestrian bloodstock. 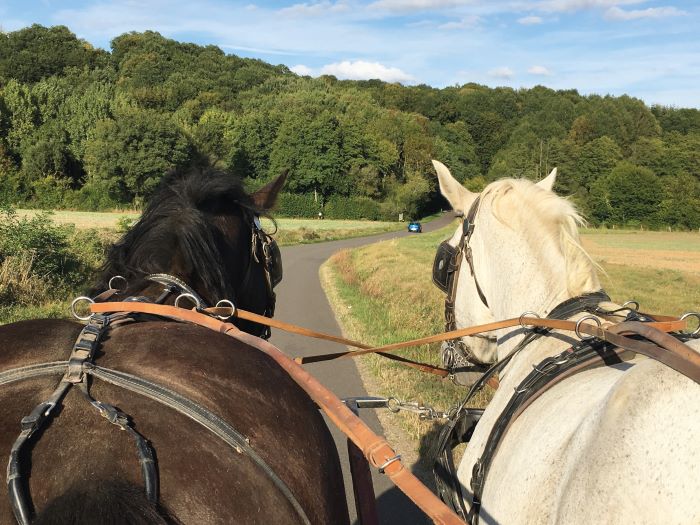 Nothing is ever far away in this enchanting region, so it’s easy to spend half a day exploring coast or countryside, and the other half at a museum or gallery. And whilst the world has been closed to holidaymakers for the best part of the past 12 months, Normandy has been busy opening new cultural attractions, revamping old ones and organising a roster of fascinating exhibitions.

The major literary event of the year is the bicentenary of the birth of Gustave Flaubert, one of France’s most famous and influential writers. Set in his home town of Rouen, Flaubert’s debut novel, Madame Bovary, is the tragic story of a woman living beyond her means. Initially banned for obscenity after it was serialised in 1856, it went on to become a modern classic. Find out more about Flaubert and his works through exhibitions, tourist trails and other commemorative events across the region. 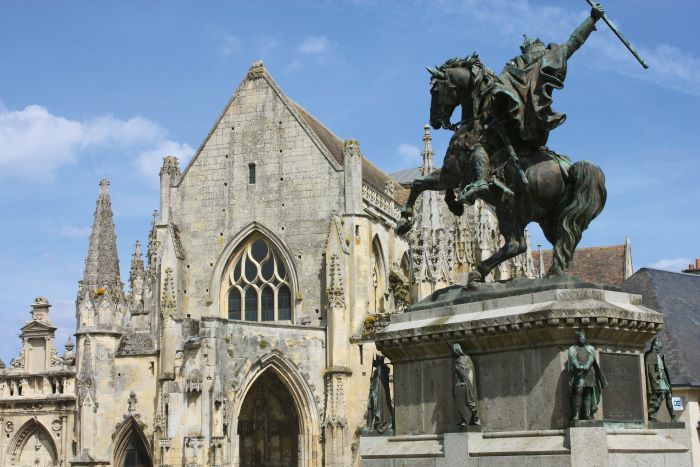 Another literary legend in the spotlight this year is Marcel Proust, 100 years after he won the coveted Prix Goncourt for the second volume of his nine-volume epic, À la Recherche du Temps Perdu. The resort of Cabourg on the Calvados coast was the author’s favourite holiday retreat and April 2021 saw the opening of the Marcel Proust Museum – La Villa du Temps Retrouvé – which showcases the Belle Époque period here on the Côte Fleurie.

And if you’re addicted to the Netflix series Lupin, inspired by Maurice Leblanc’s 19th-century novels about gentleman burglar Arsène Lupin, you’ll want to visit places connected to the original stories around Rouen and the Seine Valley, Le Havre and Dieppe.

I’ve always loved the way France breathes new life into atmospheric old buildings, from episcopal palaces to industrial premises. In stylish Deauville, a short drive east of Cabourg, an old Franciscan monastery has morphed into Les Franciscaines Museum to house a museum, auditorium and media library. Expect five thematic zones, all linked to Deauville and its history, as well as paintings donated by artist André Hambourg. 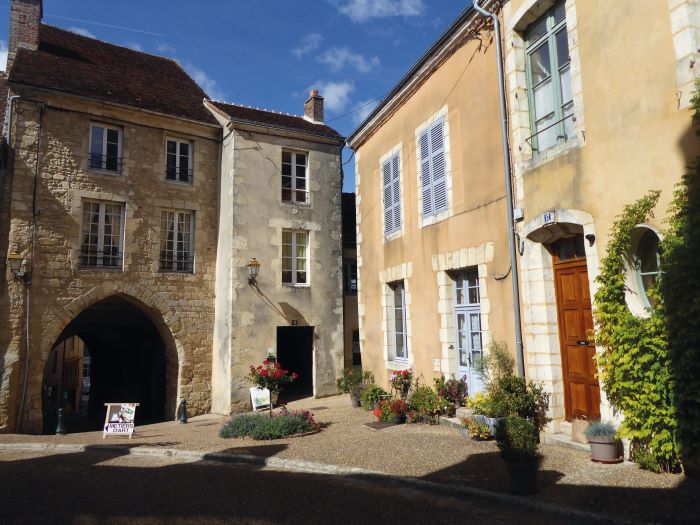 Of course Normandy isn’t just about coast and countryside, and 2021 offers a chance to get beneath the surface of some local industries too – sometimes literally. The Souterroscope slate mine at Caumont-sur-Aure, 35km from Caen, hasn’t been worked for over a century but visitors can don a hard hat and head 30 metres below ground on a journey of discovery.

One of the four underground rooms has recently been renovated with the latest museum technology and includes an extraordinary collection of giant crystals and semi-precious stones.

Or step into the lives of the coal miners at Le Molay-Littry, where the Musée de la Mine reopens this year with a wealth of new exhibits including models, machinery and a replica mining gallery. 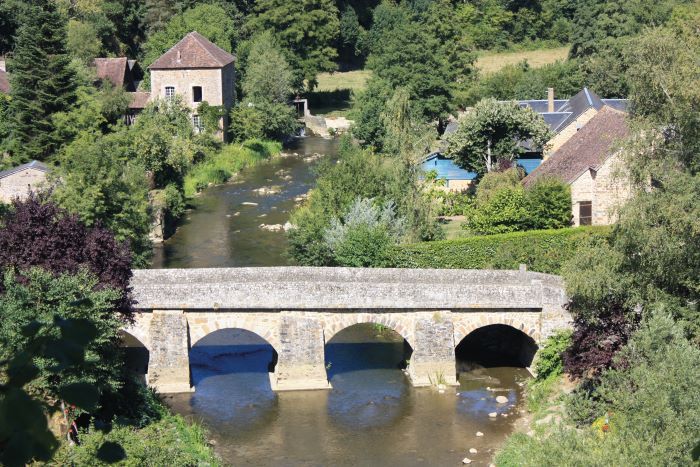 Something a little more contemporary? Then head to Vire where tableware manufacturer La Maison Degrenne has launched 90-minute guided tours of the production facility, finishing up in the factory shop where you can buy cutlery, crockery and kitchenware.

Also at Vire, the art and history museum has been completely revamped to show the transformation of the town from the Middle Ages through to its reconstruction after World War II.

Clean air and open spaces will attract many visitors to Normandy this summer and for those who like to explore on two wheels, the launch of the Vélomaritime cycle route will be particularly welcome. Stretching for 870 miles, it runs along the coast from Roscoff in Brittany through Normandy to Dunkirk in Northern France, and is now fully signposted. Take your own bikes over on the ferry or hire some locally. 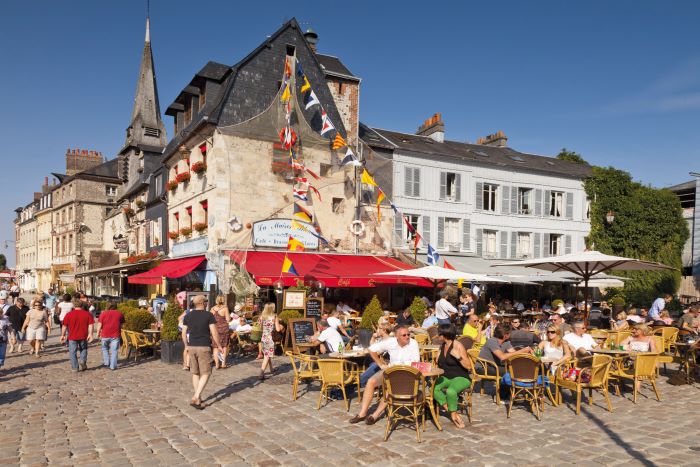 This scenic cycle way passes many of Normandy’s major landmarks, including Mont-Saint-Michel and the D-Day landing beaches, chic Deauville and the picturesque old harbour at Honfleur. Hop off your bike to visit Fécamp, home of Benedictine liqueur and a fascinating fisheries museum, as well as the chalk cliffs at Étretat, painted by Claude Monet, perhaps the most revered of all the Impressionist artists.

Monet’s glorious garden at Giverny attracts visitors from across the globe so this could be a good year to experience its colourful borders and tranquil lily pond without the usual crowds. You can see how other Impressionists, such as Renoir and Pissarro, tackled floral subjects at the Impressionist Gardens Exhibition, which is running until November 1 at Giverny’s Musée des impressionnismes. Giverny is just one unmissable stop on the new long-distance cycle route, La Seine à Velo, which launched this spring. Eventually it will run for 430km between Paris and the Normandy coast at Le Havre and Deauville, passing many places immortalised by the Impressionists, such as Rouen, Jumièges Abbey and Honfleur. 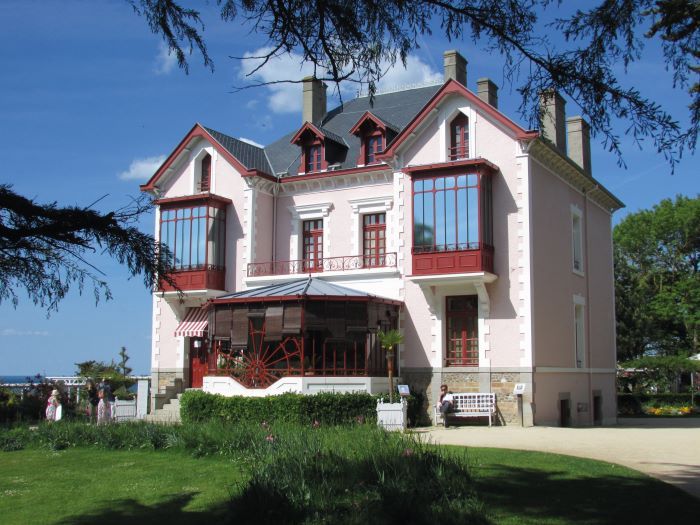 Deauville, meanwhile, boasts new twin towers, 27 metres high, which mark the transition between the town centre and the new peninsula area of La Touques. One tower, an obelisk, houses the machinery for the footbridge, while the other offers a panoramic view of the estuary. A restaurant overlooking the yacht harbour is also scheduled.

Many people have discovered the joys of cycling in recent years thanks to the rise of e-bikes, but the latest thing in Normandy is the fat bike, an electric bike with thick tyres which provides visitors with a leisurely tour around. Two legs or two wheels, no visitor should miss the immaculate American Cemetery and Visitor Centre, set in landscaped gardens on the cliff above the beach. 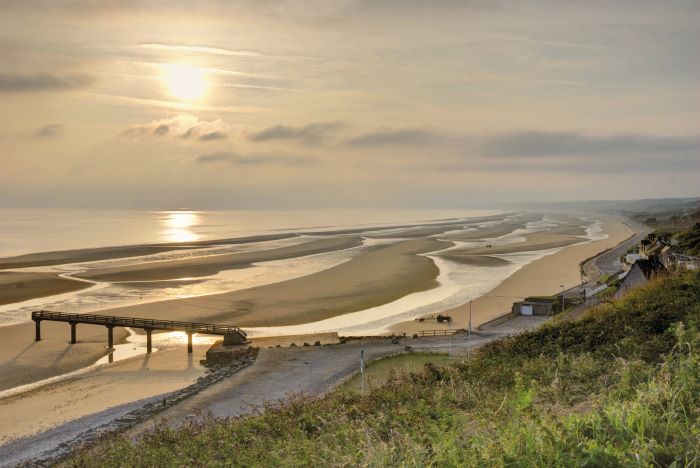 Away from the coast, Normandy’s quiet countryside is perfect, whether you want to get seriously sporty, potter around on foot, or drive between bijou villages. Six are classified amongst Les Plus Beaux Villages de France. Go rock climbing, kayaking and paragliding at Clécy in the Suisse Normande, Normandy’s upland region where the Orne cuts through a rocky massif south of Caen, or follow one of the family-friendly walking trails. For inspiration, head to the visitor centre at La Roche d’Oëtre, west of Falaise.

Normandy also boasts four Regional Natural Parks. In the south of the region, the Normandy-Maine Regional Natural Park comprises the Andaines and Écouves forests and includes historic Domfront, with its ruined medieval castle, and the pretty spa town of Bagnoles-de-l’Orne. Find out more at the Maison du Parc at Carrouges. 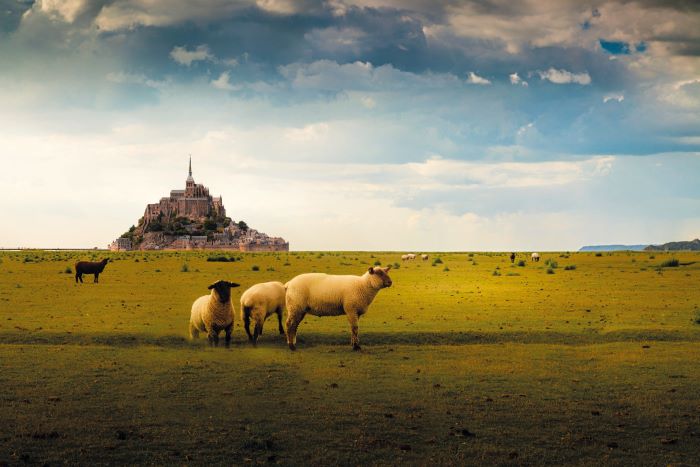 To the east, the Perche Regional Natural Park has become a favourite with both Parisian and British weekenders for its slow-food culture, traditional crafts and antiques shops. Dotted with pretty villages and small towns like La Perrière and Bellême, this tranquil area is home to the impressive Percheron draft horse. Find out about carriage drives and other activities at the Maison du Parc in the grounds of the Manoir de Courboyer. And don’t miss the equine residents of the Haras national du Pin stud.

Stretching between the east and west coasts of Manche, the Cotentin and Bessin Marshes Regional Natural Park is an area of wetland and bocage, or hedgerow landscape, a haven of biodiversity and birding that can be discovered in the Maison du Parc at Carentan. And it’s all just a stone’s throw from the open sands and D-Day museum at Utah Beach, as well as pretty Saint-Vaast-la-Hougue, which was voted France’s Favourite Village in 2019. 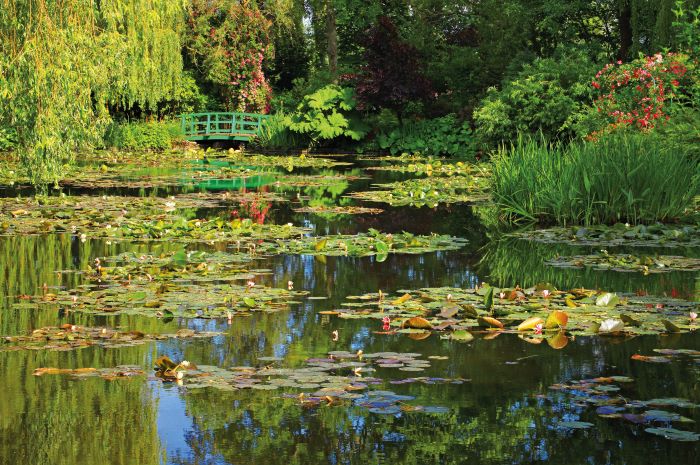 Making up the quartet of parks is the Boucles (meanders) of the Seine Regional Natural Park, which stretches for 112 miles between Rouen and Honfleur. The name Seine comes from the Latin word sequana, which means ‘meandering’. Stop off at ruined abbeys like Jumièges to walk amongst atmospheric stones that have inspired artists from Turner to Corot.

Follow the Fruit Trail, which stretches 62km from Notre-Dame-de-Bliquetuit, and cycle and picnic amongst orchards of cherries and plums, berries, apples and pears – it’s glorious adorned with spring blossom, and you can pick up fruit from the farm gate when in season. 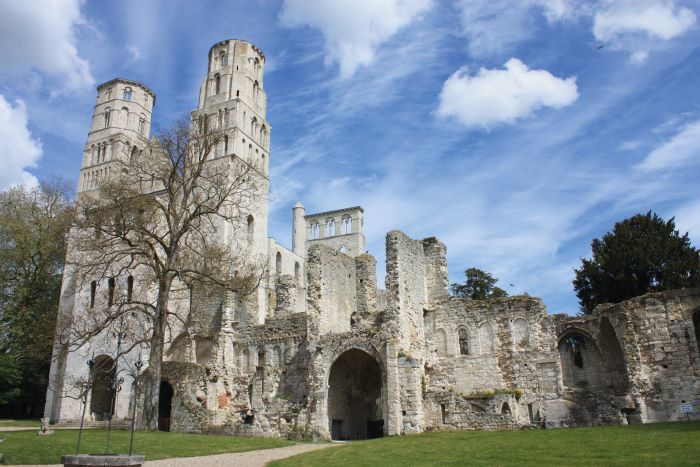 Or if you prefer, take the Thatched Cottage Trail across the Marais-Vernier marshland. But be warned! The half-timbered cottages with irises on the ridge are guaranteed to instil serious house envy. But of course, that’s all part of the pleasure.