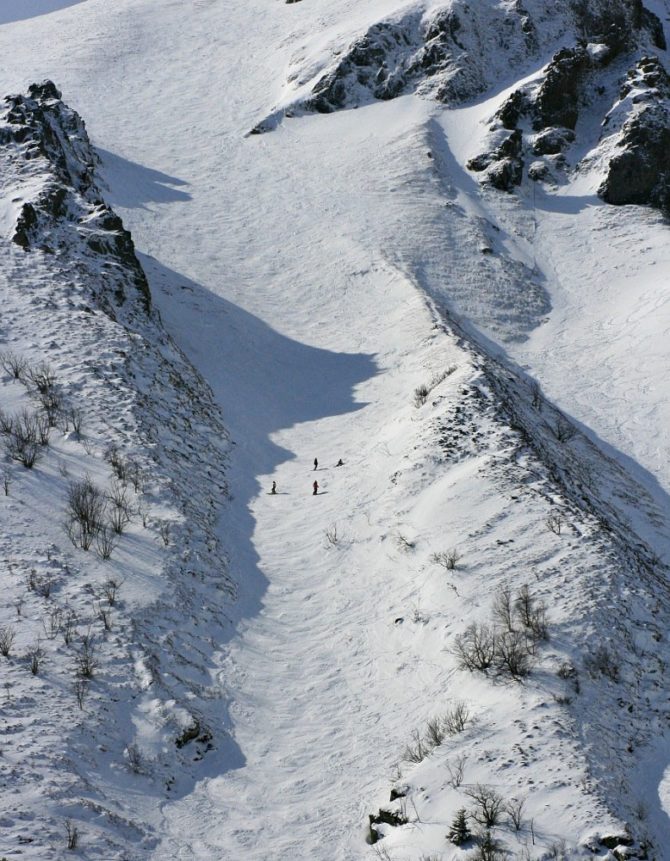 Skiing on the slopes of a volcano sounds like a risky pastime. Hurtling down an erupting mountain at breakneck speed while dodging balls of burning lava seems more like a James Bond sort of thing. But no need to worry. Although there are more than 80 separate volcanic craters in the Auvergne region—the highest concentration in Europe—they are all dead or dormant. Although the last eruption was only 7,000 years ago—a blink on the geological time scale—the big ones all blew their tops about 100,000 years earlier.

The Auvergne has three main ski resorts: Le Lioran in the Cantal département, and Super Besse and Le Mont Dore in the Puy-de-Dôme. They lie on either side of the 6,188-ft Puy de Sancy, the highest mountain in central France and part of an ancient volcano. (The word puy, much used in the region, means mountain or summit.) By Alpine standards all three resorts are small, but small also means fewer people, shorter lines and less expensive lift passes. 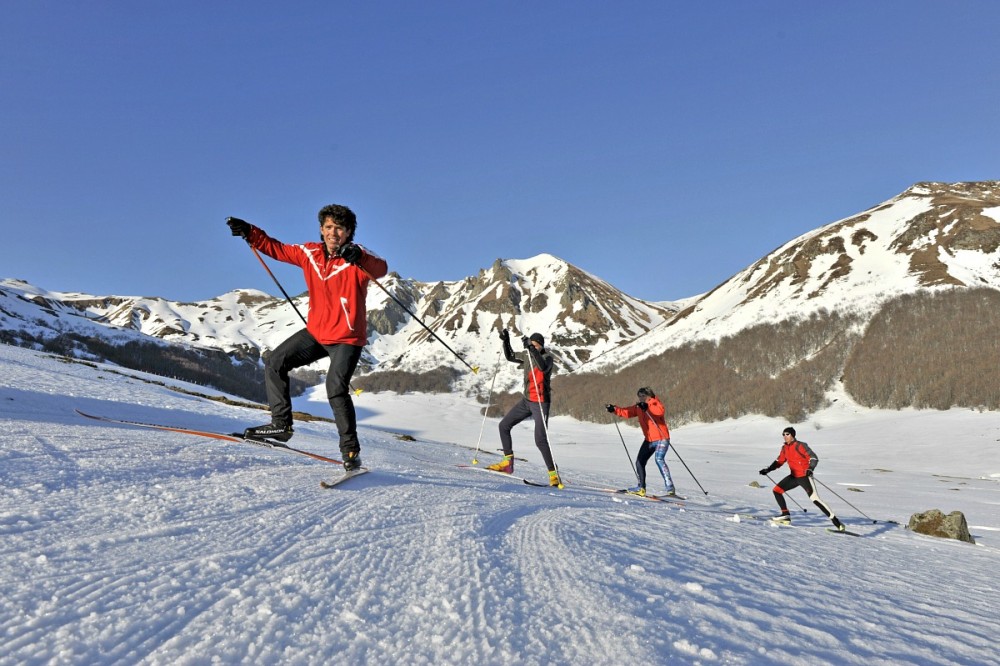 Le Mont Dore is an old spa town—its hot springs were used by the ancient Gauls before the Romans turned up—but its faded 19th-century glamour is a long way from the ritzy resorts of the Alps. Happily for the rest of us, the Auvergne is not yet on the jet-setter’s itinerary. One of France’s oldest winter sports resorts, opened in 1907, Le Mont Dore is still a lesser-known winter holiday destination, although it offers great skiing, both downhill and cross-country, and a host of other quirky, snowy pastimes in the heart of l’Hexagone—both geographically and metaphorically. The early 19th-century spa building is worth a peek for its ornate Byzantine-Romanesque interior, and a cable-car ride to the top of the Puy de Sancy offers a spectacular view.

Le Lioran and its modern adjunct Super Lioran sit between the volcanic peaks of the Puy Griou and the Plomb du Cantal, near the Font de Cère, the source of both the Alagnon and Cère rivers. Extending over neighboring communities, it’s the biggest ski area in the region, covering a total of some 370 acres, with nearly 40 miles of downhill ski runs and many miles of cross-country trails. Like Le Mont Dore, it also offers snowboarding, snowshoeing, skating, dogsledding and other winter sports. And skiers arriving at Le Lioran by train (about six hours from Paris) can hit the slopes directly with a surface lift (téléski) leaving right from the station. 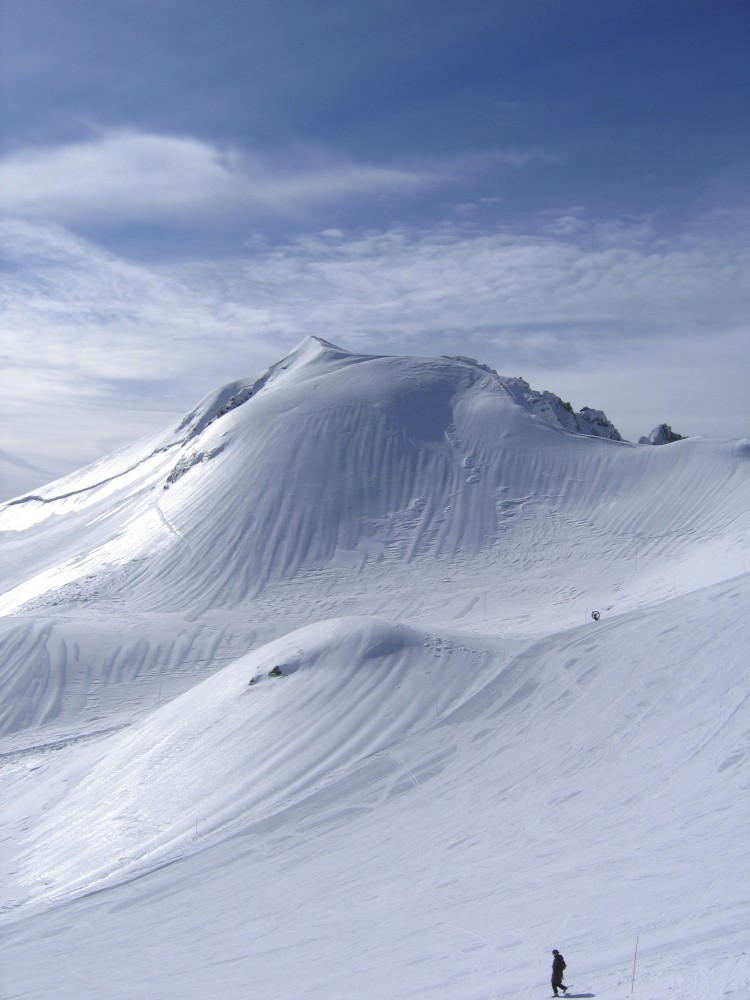 The summit of the Puy de Sancy volcano © OT Sancy

Super Besse is located at an altitude of 4,430 ft. While it has a reasonable selection of downhill pistes, it also offers 77 miles of superb cross-country or Nordic ski trails. Cross-country skiing—in French, ski de fond—is a world away from its daredevil downhill cousin. You can enjoy nature, and the surrounding sights and sounds of the snowscape, in a way that is just not possible when you are slaloming downhill at top speed. All of a sudden you are aware of the forest, the birds in the trees and the gurgling streams. It is more like hiking in a winter wonderland, but a little bit harder and a lot more fun. Cross-country skiing uses every major muscle group, and it’s one of the sports that burns the most calories per hour—although, to be fair, probably not if you keep stopping every few minutes to enjoy the view.

Cross-country skis are much narrower than normal skis. Although they have bindings to keep your feet attached, your heels are not fixed to the skis, allowing you to push forward with a more natural movement. On the flip side, it also means you are liable to slip and slide around a lot more—at least if you are a complete beginner like me.

Getting into motion is relatively easy. Stopping is less so. The required movement is a cross between skating and walking with slightly bent knees; as you get the hang of it, you can glide further with each “step”. As we pushed off on the easy, green-coded circuit called Le Madalet, things seemed to be going quite well. But poised at the top of a gentle incline I realized I wasn’t sure about the mechanics of braking. It turns out you do a one-sided snowplow, with your downhill leg doing most of the work. But holding a snowplow is not easy when your skis keep slipping from under your feet, and my initial efforts probably gave my instructor a few (well-disguised) giggles.

After I appeared to have mastered the basics, we moved on to La Biche, a medium-level red circuit. (Cross-country uses the same color coding as downhill.) La Biche was considerably longer than Le Madelet, and the slopes much steeper, leading to a new difficulty—going uphill. Better cross-country skiers skate up, using their poles for an extra boost. The less-than-expert neophyte always has the option of sidestepping up the slope.

Cross-country skiing dates backs to prehistoric times in Sweden, Norway, Denmark and Finland, and well into the 19th century it was one of the main ways to get around those countries in winter. In fact it is still a way of life for some in Scandinavia. It’s the second most popular winter sport in France, after downhill skiing. And, as lift passes at some Alpine resorts approach €50 a day, cross-country offers a refreshingly inexpensive way to get out and enjoy the snow. While a downhill pass in Super Besse is €28.70, a pass for the Nordic trails is just €6.80. Of course there is much less to maintain in terms of high-altitude lifts, but the trails themselves must be kept snow covered, even if it means—as it frequently does—bringing in buckets of snow from elsewhere.

The medieval village of Besse lies just a few miles below the resort of Super Besse, and a shuttle bus runs between the village and the ski area several times a day. Super Besse is a pleasant enough place, a purpose-built ski station with blocks of rental apartments, plenty of parking and numerous shops selling ski equipment, ski clothing and regional specialties. But Besse is the real thing. 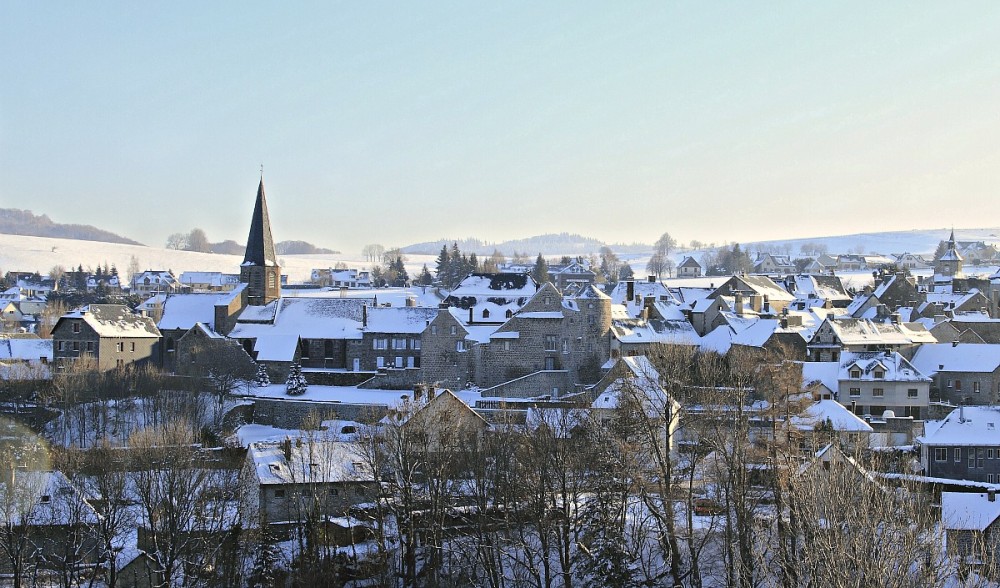 The village of Besse. © OT Sancy

With its narrow streets between slate-roofed houses built with dark grey volcanic stone, Besse seems a world away from its sunny mountaintop cousin. For a start, in winter there is almost no one there. This, our guide assured us, is not the case in the summer, when the village is extremely popular with vacationers. Combined with the low January sunlight and the rust-red shutters—originally so colored because they were not painted but stained with blood from the butcher’s—the nearly deserted streets give Besse a mysterious, slightly otherworldly atmosphere.

The centerpiece of the village is its 12th-century church, Saint André. Inside is a black Madonna carved from cedar. Each July, with much ceremony, the statue is carried up to the chapel of Vassivière in the mountains, and each September it is brought back to Besse. The Virgin’s annual pilgrimage stems from a local legend: The statue’s original home was the mountain chapel, but in the 16th century it was decided to bring her down to the village. Clearly she wasn’t happy with her new home and made her way—by herself—back to the chapel overnight. This apparent miracle happened three times before it was decided that the Virgin would thereafter have both summer and winter homes. 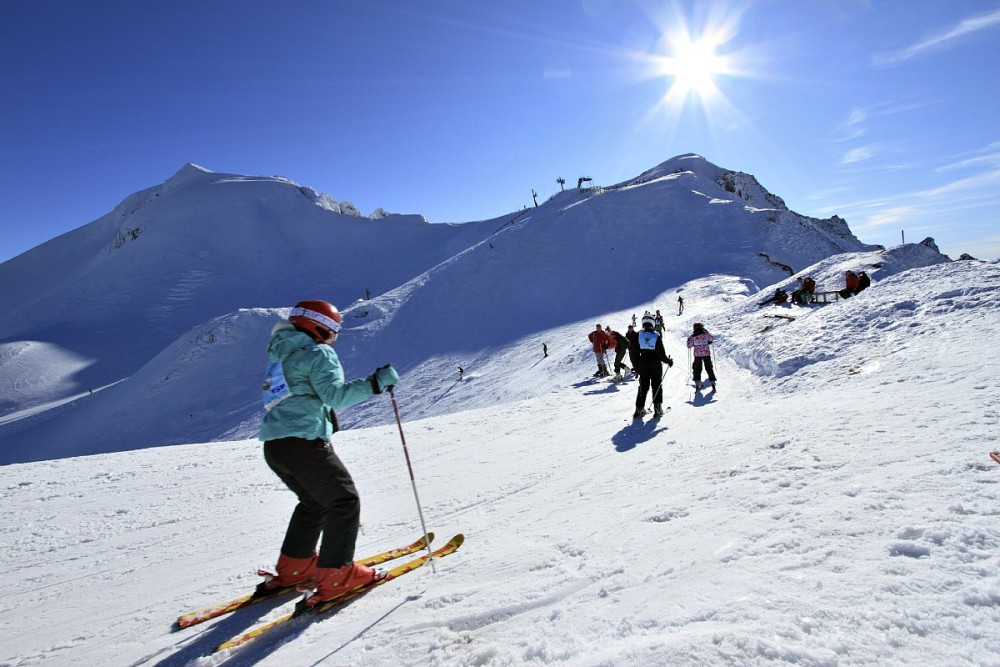 For a small village, Besse has a surprising number of cheese shops. But the Auvergne is justly proud of its regional cheeses and boasts five that are certified Appellation d’Origine Contrôlée or AOC—the most AOC cheeses of any region in France: the Bleu d’Auvergne from the Massif Central; Cantal from the Cantal mountains and foothills; Fourme d’Ambert, made in the Livradois-Forez area; Salers, a summer cheese from the heights of Cantal; and Saint-Nectaire from the Massif du Sancy.

A soft, silky cow’s-milk cheese, Saint-Nectaire has been made in the Auvergne since at least the 17th century and was presented at the court of Louis XIV. Various farms near Besse, including the Ferme la Clef des Champs run by Nathalie et Philippe Grampeyre, offer tours of their cheese-making operations and the chance to buy some top-quality fresh produce. For real cheese enthusiasts, there is a Route des Fromages AOP d’Auvergne to follow, taking in some of region’s best cheese producers.

For many visitors to France, their only glimpse of the Auvergne is from the car window as they head down the A75. They are missing out on a remote and beautiful region. But while the Auvergne may be rural it is not primitive; you can holiday in style here in the growing number of boutique hotels and guesthouses such as the Datcha Anastasia in Besse-et-Saint-Anastaise and the Lac du Pêcher eco-lodge in Chavagnac. But nature will always be its biggest draw, and of course all those volcanos—in summer the view from one of the puy-tops is a stunning expanse of craters in vivid emerald green. 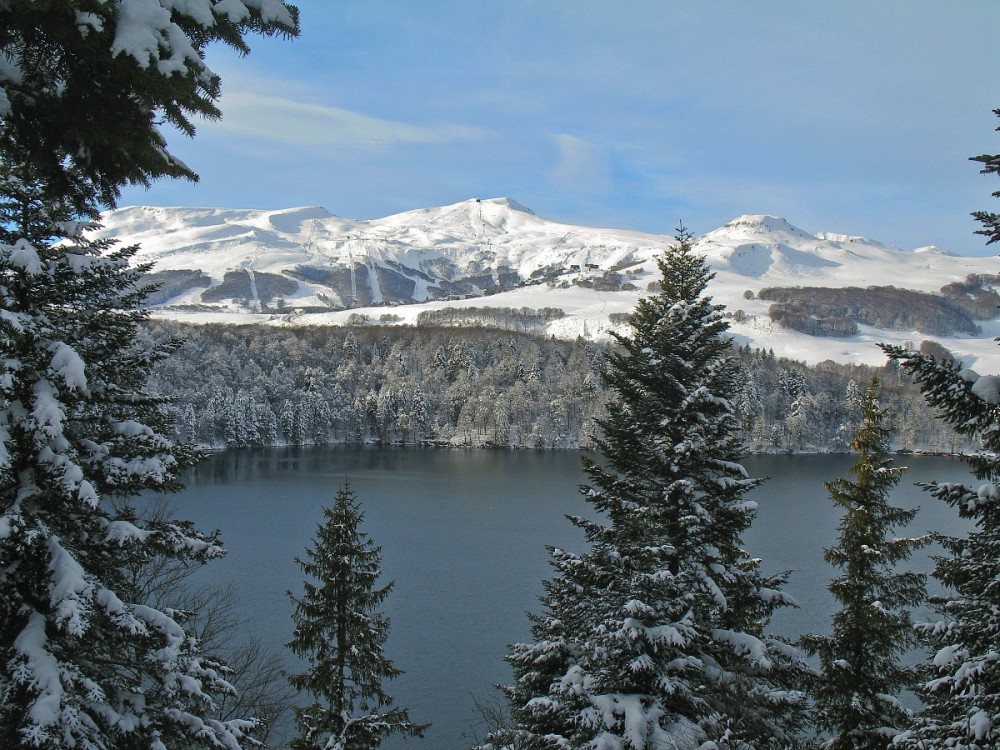