Pétanque: It’s Not a Game, It’s a Religion 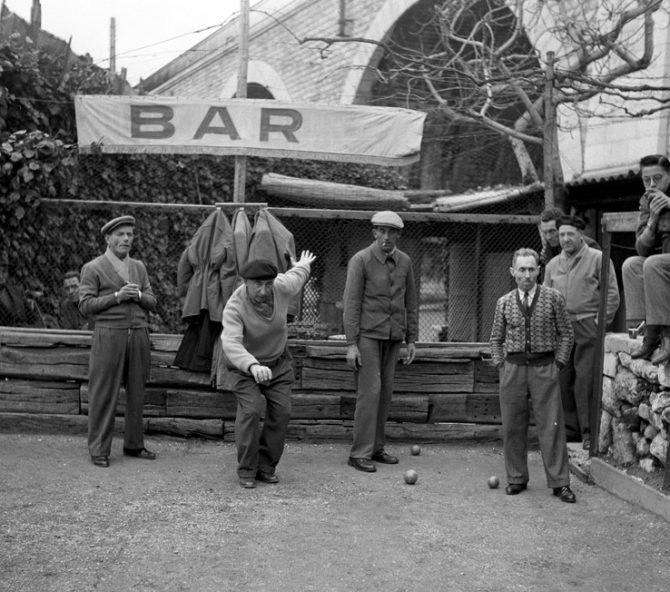 “That was un carreau, when I hit your boule on the head.”

I watched, a little crestfallen, as my steel boule skittered across the park and into the undergrowth, ruthlessly knocked out of position by my new de facto teacher. I had been pretty impressed with my first attempt; my boule coming within a yard, or at least a meter of the wooden jack, but now, as one of the amicable local dogs followed my boule cheerily into the tall grass, I wondered if I’d come to regret asking this seasoned Frenchman for a game of Pétanque. Still, with the warmth of the Provençal sun on my back and the gentle chirping of cigales echoing around the walled courtyard of the medieval village which had, for the last week, been my home, it was hard to get too worked up. The waiter at the café just opposite had even promised a glass of Pastis to the winner, though the chances of me claiming this prize now looked slim.

I had first been introduced to the game of Pétanque three weeks previously, on a cloudy weekend in Paris. The stresses of cooking up a Sunday lunch in a tiny, one bedroom apartment had required that all superfluous persons be banished outside until my friend, and now flustered host, called us back inside. “I don’t know, go play Pétanque” he said as he thrust a heavy set of steel boules into our hands and pushed us out the door.

After a couple of dubious first rounds I was beginning to get my eye in, and I was soon learning from my fellow lunchtime prep outlaw that this game, seeming like a simple variation of Bowls, had in fact a hallowed history and a dedicated nationwide following. “In the south this game is religion,” she told me, in the theatrical and mysterious tone I had come to expect in Parisian conversation. Apparently a ‘boulodrome’ could be found in every French village, where locals in all shapes and sizes, though predominantly older gentlemen, turn up like clockwork each day and methodically play out rounds which can last for hours. National competitions are held each year, where the winnings can reach up to a staggering €25,000, and there’s an official governing body, The Fédération Française de Pétanque et Jeu Provençal, or simply the FFPJP. Catchy. I was taken aback at how much she knew about this sport, until she exasperatedly explained that her father, a Marseillais through and through, had once narrowly missed out on that €25,000 prize.

“They even had to invent magnets on strings to save the knees of all the players who have to bend down to pick up their boules literally thousands and thousands of times,” she cried incredulously, as my boule struck an old cigarette butt and veered towards a dubious looking brown patch in the gravel. Oh Paris.

I had no idea that a game I used to play with my siblings on the beach with old tennis balls was taken so seriously in France. I wanted to find out more. As planned, I left Paris on my bike the following day, and headed south. 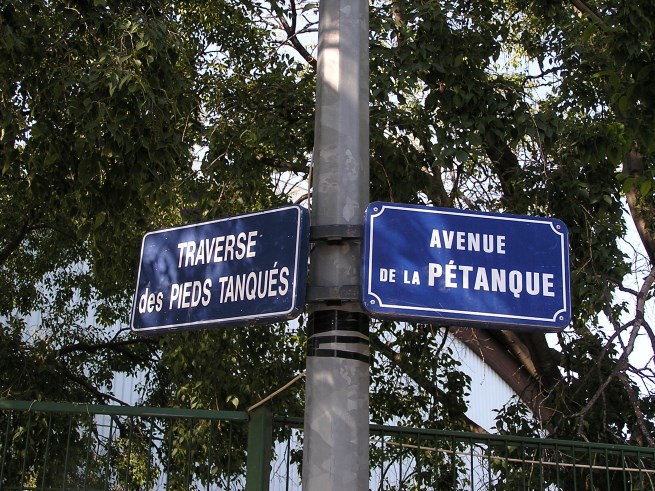 The story starts in the southern town of La Ciotat, near Marseille, at the turn of the century. A local café owner, Ernest Pitiot, tired of a regular’s complaints about the physicality of the then-popular Jeu Provençal, invented a game which could be played by all the old boys. You see Jeu Provençal involved all sorts of hopping and leaping whilst the ball was thrown, playing havoc with the rheumatic legs of one particular player, Jules Lenoir, a regular to Pitiot’s cafe. In the newly-devised game, the court was halfed and most importantly the players were required to keep both feet planted on the ground or pieds tanqués, which soon became Pétanque.

Thanks to the sailors who stopped off in La Ciotat, the game spread quickly through France, and with so few requirements to play – just a set of boules and any flat-ish surface – the sport became a national favourite, played by the rich and the poor.

Today Pétanque has come to symbolise the southern mentality in France. The game attracts eccentric types who are just as happy watching, with a glass of Pastis, as actually playing. It is perhaps best understood not as a game but as a spectacle, where the player’s interaction with their spectators is what shapes the line of play, and is what ultimately becomes Pétanque. It is a pantomime of theatrical trash-talking and bantering, serving to bring together the local and national community. Perhaps if I bought a set of boules I could do what so many outsiders before me had failed; I could become part of the French community. It was worth a shot. 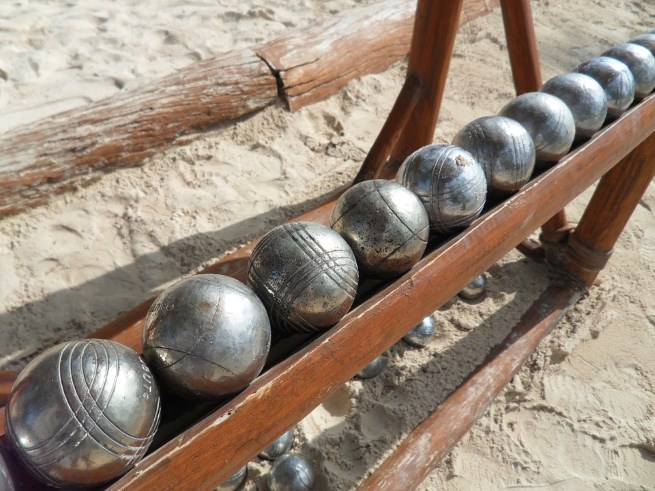 Before starting this new cultural conquest however, I couldn’t help but be a little off-put by the last resounding words of my friends in Paris. “If you play Pétanque with a local, whatever you do, don’t make Fanny!” What could these cryptic words mean? After reading a little handbook I found in a dusty flea-market in the Latin Quarter, I was not reassured.

As with all sports that originated as a village game, there are peculiar little traditions which are obediently obliged by Pétanque players. In Cricket, for some baffling reason spectators will stand on one leg when the score reaches the unlucky number 111, known as a Nelson; in Pétanque it is 13-0 that holds significance. If a person loses a game 13-0, without scoring a single point, the punishment is to kiss the bare behind of a woman named Fanny. ‘Who is Fanny?’ you might ask. Well, as with all folk traditions, the origins are spurious; but some accounts hold that Fanny was the waitress of the café that overlooked the original boulodrome in La Ciotat. To console players who lost without scoring a point, she would allow them a kiss on the cheek. On one occasion it was the town Mayor who had lost in this fashion, and in response to a personal quarrel Fanny had with him, she stood on a stool and presented a cheek of the other kind to kiss.

Nowadays, losers who fail to score are required to kiss the local statuette or painting of Fanny. The shame of this procedure can be increased by ringing a bell to alert the whole village to the loser’s misfortune; or in some villages with the aid of a ceremonial Fanny prayer bench, requiring the unlucky soul to kneel prostrate before the patron saint of Pétanque, before sheepishly planting a kiss. 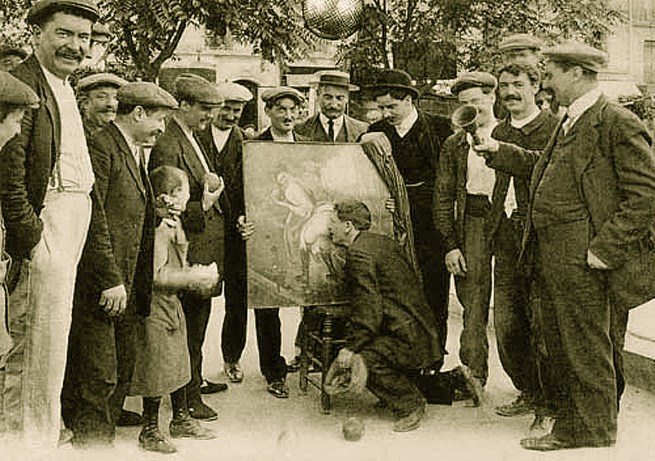 By the time I had reached Provence, I took it as a given that I would find a terrain complete with six or seven locals playing a game of Pétanque in every village square I stopped in to fill my water bottles up. I had bought myself a set of boules, plucked up the courage to join in with these village games, and it was in the small commune of Castellet, in the Luberon, that I was now at risk of embrasser Fanny.

“That was another carreau, I hit your boule on the head…”

For 45 minutes I had watched helplessly as the old Provençal tossed boule after boule, knees bent with a graceful arcing motion, sending my own careening off each time with a loud clack. The round was drawing to a close, and I was yet to score. I glanced over my shoulder nervously, anticipating an approaching rabble of villagers, the ceremonial painting of Fanny carried proudly on their shoulders, and a bell in the hand of the mayor at the front. But with my last throw, taking heed to the advice of bending the knees in a complete curtsy, my boule found its target and I was saved the humiliation of a clear scorecard. The bell toll’d not for me.

The waiter wandered over to me with two Pastis in his hand and leaned against the old Plane tree at the edge of the rustic boulodrome where I now stood, defeated and thoroughly put in place. “C’est pas grave,” he said as he handed me the glass, “it’s just a game.”

Want to try your hand at Pétanque in the south of France? Join France Today Travels on an authentic tour of Provence, where there’ll be plenty of opportunities to play the sport in its hometown.