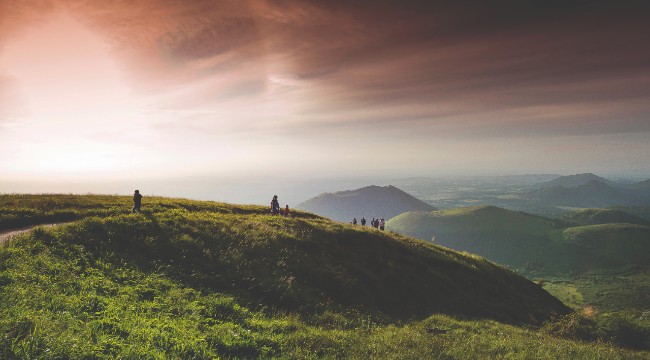 Le Puy du Pariou is the perfect volcano. Conical, symmetrical and with a crater gouged out of the top, it rises 1,209 metres above sea level. A footpath leads you up the exterior slope, around the rim and down into the middle of the crater – now all covered in grass and scattered with volcanic rocks.

What’s even better is that it hasn’t erupted for 9,300 years, so it’s totally safe – in theory, at least. My guide calls it “the David Beckham of the Auvergne volcanoes”.

This is the Parc naturel régional des Volcans d’Auvergne – a 1,500 square mile park stretching across the western section of France’s Massif Central mountain range, and home to around 150 volcanoes. The most impressive section is a string of 80 or so called the Chaîne des Puys. Many, like Puy du Pariou, are cinder cones, with craters at the top. Others are lava domes or wide crater bowls called maars. There’s even the odd crater that has flooded with water and become a lake. 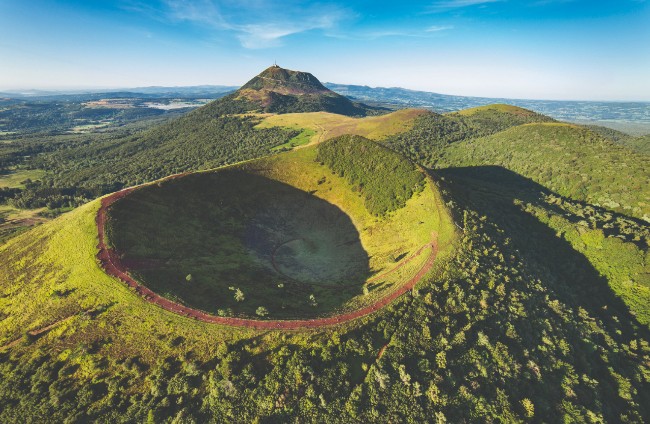 It’s an intriguing and beautiful part of France, with rare geographical features and, thanks to government conservation, it’s been carefully protected over the years. So well, in fact, that last year the Chaîne des Puys – and its accompanying Limagne fault – was awarded UNESCO World Heritage status, grouping it with other amazing natural phenomena such as the Grand Canyon, the Great Barrier Reef, Ha Long Bay and the Serengeti.

“It is an emblematic segment of the West European Rift, created in the aftermath of the formation of the Alps, 35 million years ago,” UNESCO explains. “The geological features demonstrate how the continental crust cracks, then collapses, allowing deep magma to rise and cause uplifting at the surface. [It] is an exceptional illustration of continental break-up – or rifting.” 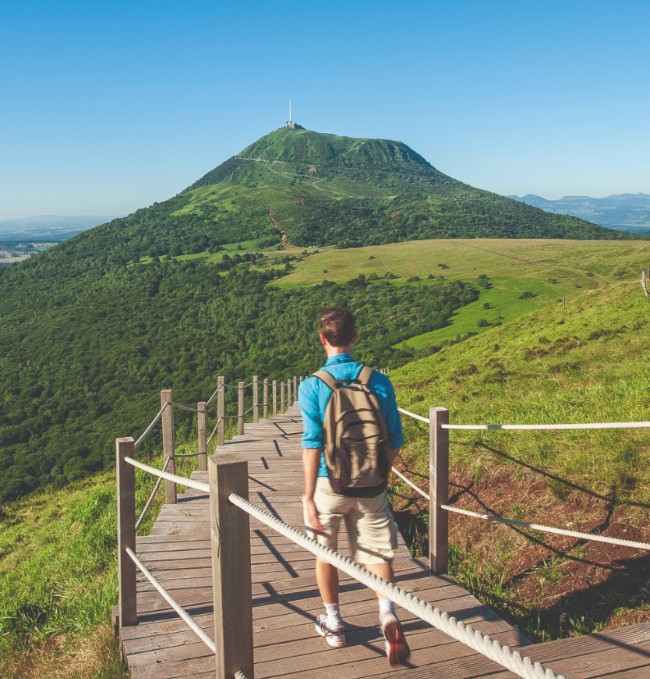 Along with my very experienced guide, Cédric, I’m following a long-distance path called the sentier de grande randonnée 441, which loops around the Chaîne des Puys. Our two-day route starts in the village of Orcines, west of Clermont-Ferrand, and takes in some of the most intriguing features the park has to offer. On our second volcano, Le Cliersou, we visit a group of caves carved out of the mountainside during the time of Roman-occupied Gaul. Rocks from here were used to build a temple to the god Mercury, the remains of which still stand near the top of the huge Puy de Dôme, the most prominent volcano in this section of the park, and the next stop on our route.

Rising 1,465 metres above sea level, and crowned with a weather station and communications mast, this enormous peak dominates the skyline of the Chaîne des Puys. It was here, in the 17th century, that the famous physicist Blaise Pascal confirmed his theories on barometry and vacuums. Nowadays there’s a small train called the Panoramique des Dômes which takes visitors to the top. The more energetic, like us, hike up the footpath instead. Apparently almost half a million people visit this peak every year, a number which will surely increase now that UNESCO has stamped its mark. 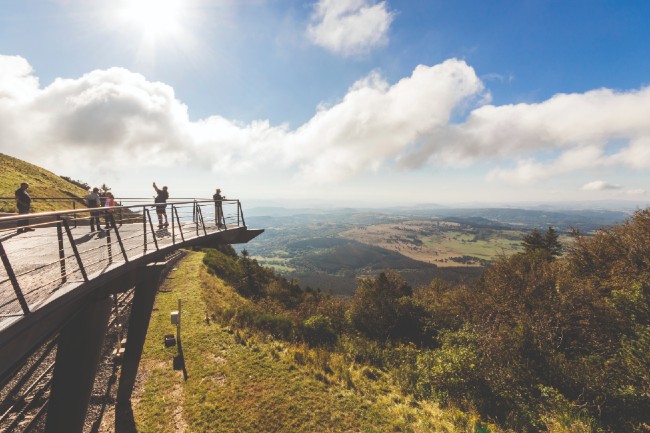 The spectacular terrain affords many a photo opportunity. Photo: Shutterstock

During the warmer months, this is a magnet for France’s paragliders, who flock here in their dozens, floating gracefully in the thermals that rise up the side of the mountain.

Before the railway was built, in 2012, Puy de Dôme was the site of some memorable Tour de France action. In 1964, homegrown cycling heroes Raymond Poulidor and Jacques Anquetil famously battled their way up the mountain, side by side most of the way, in a duel that thrilled the spectators lining the route. Eleven years later it was here that Belgian cycling legend Eddy Merckx was attacked while on his bike. Not long before the finish line, as he was grinding his way along a narrow stretch of road between throngs of fans, one disgruntled spectator punched him in his midriff. Merckx soldiered on, crossed the line, promptly vomited, and spent the next couple of days nursing a very large bruise and an inflamed liver.

I get a bit of a beating myself at the summit of Puy de Dôme. Not from a spectator but from a gale-force wind blowing in from the west – so strong that I can lean off the side of the mountain, arms outstretched, without falling over. Blasted and buffeted like corks in a bottle, Cédric and I decide to head for shelter at lower altitudes. We quickly zigzag down the southern side of Puy de Dôme. From there we head across the Col de Ceyssat pass, and into the thick conifer woods of the Bois de Rochetoux. 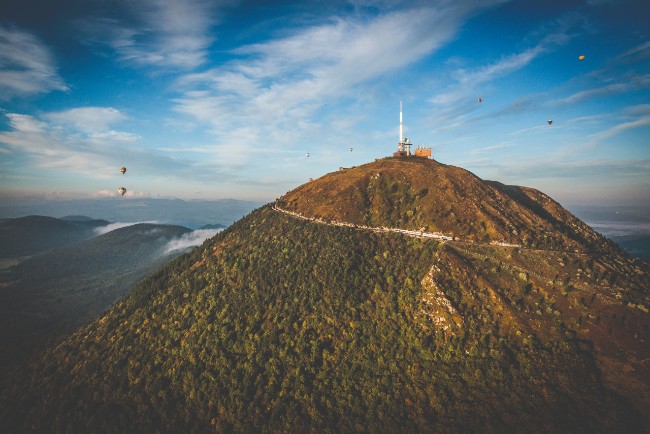 At just 10,700 years old, Puy de Dôme is one of the youngest of the volcanoes in the chain. Photo: G Fayet

At one point we meet up with two rangers from the Parc des Volcans, Antony Porte and Rémi Lafont. With only a year of UNESCO status under their belts, they’re unsure as to what the effects will be on the park.

Currently there are only four rangers employed across the entire 40,000 hectares of terrain that has been designated by UNESCO. The park already welcomes hundreds of thousands of visitors a year. But with the extra publicity from UNESCO, that number could rise meteorically.

“It could be more of a problem for us than a benefit if we’re not ready to deal with the increase in visitors,” Porte says. “It’s imperative that we conserve the natural characteristics of this site.” 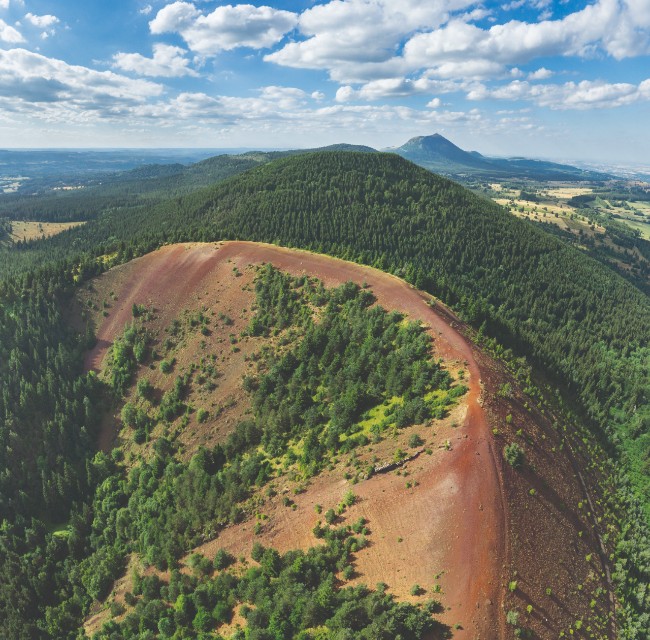 Porte admits that many of the landowners within the park weren’t exactly over the moon when World Heritage Status was achieved. Sheep farmers in particular are concerned about hikers traipsing across their land and disturbing the livestock. “We need to attract people to the park,” Porte says, “but at the same time maintain traditional activities and preserve the eco-systems.”

He also points out the fragility of the crumbly, volcanic soil that covers much of the park. “You only need a few extra people to come and it could ruin the paths completely.”

This explains why there are so many signs warning hikers to stay on the paths, and ropes to stop them cutting corners. What could alleviate the pressure of extra visitors is, of course, more investment. 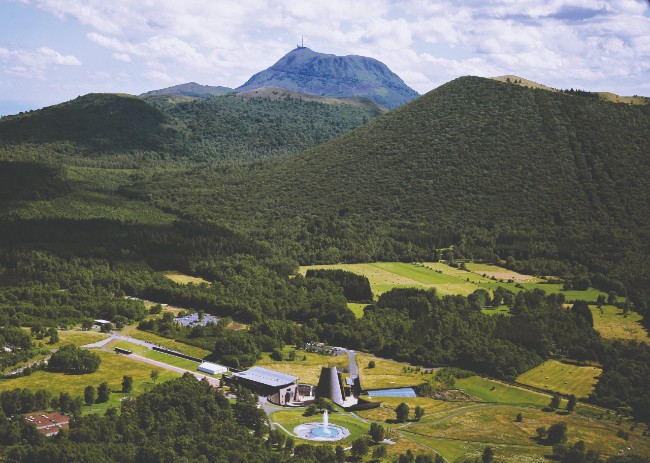 “Money, now that’s the most interesting aspect for us,” Porte adds. “But, for the moment, the extra money that has been promised is just verbal.” Others are much happier about all this UNESCO attention, among them Vulcania, the volcano-themed amusement park a little way northwest of Puy de Dôme. The site, which includes IMAX films, a volcano simulator, visitor rides and loads of scientific research, already welcomes around 320,000 visitors a year, but that figure is expected to rise thanks to the recent UNESCO boost.

Frédéric Goullet, of Vulcania, says the theme park is investing in on-site accommodation and roller coasters. Within the next 10 years he expects up to half a million visitors every year, many of them from abroad. Goullet believes Vulcania is an easy sell because so many of us are naturally intrigued by volcanoes. “They fascinate all people because they are beautiful – and dangerous.”

Back on the sentier de grande randonnée 441, on the second day of our hiking trip, the weather suddenly takes a turn for the worse.

Within the space of a couple of hours, we submit to sleet, violent wind, a hail storm, fog so thick we can’t see more than 10 metres in front of us, and then bursts of spring sunshine. Wrapped safely in waterproof jackets, we put our heads down and tick off the miles, with the gravelly brown and black volcanic soil beneath our feet.

Our route takes us around the rim of the Puy de Lassolas volcano, and then into the crater of the Puy de la Vache which, with its burgundy soil and dark grey rocks, looks rather like something out of a Doctor Who set. 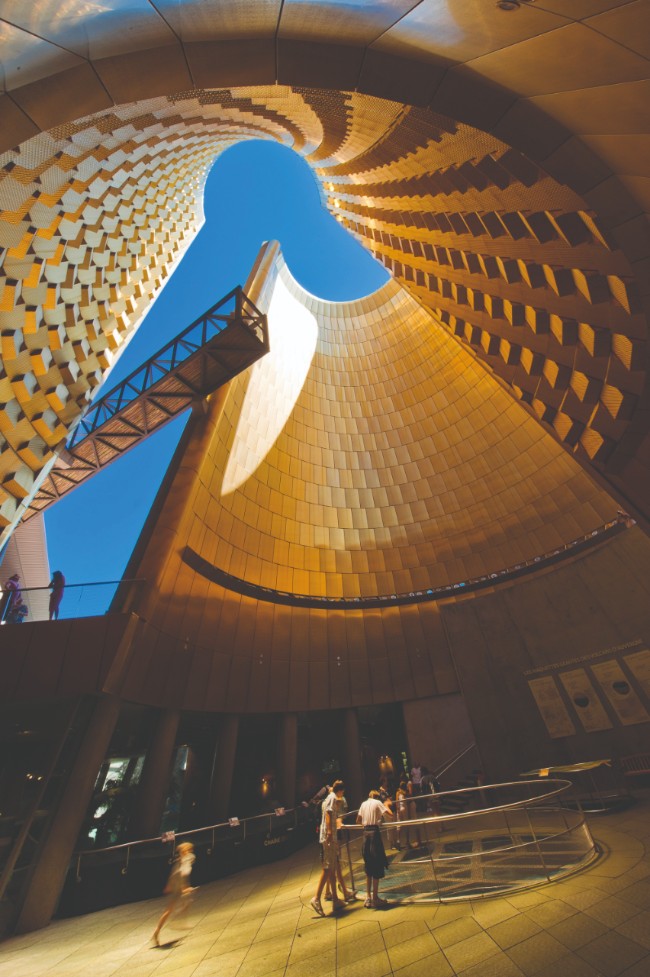 Eventually we turn back north, alternating between open farmland and thick, mossy forests. By the time we reach Cédric’s car, which we’d left at the start of our route, we’ve covered a total of 50km in two days. As we head towards Clermont-Ferrand, I gaze behind me at the line of volcanoes on the skyline, especially Puy de Dôme, rising above the rest. I wonder if these magnificent hills might ever erupt again.

Frédéric Goullet later warns me that the volcanoes of the Auvergne may be dormant, but they’re certainly not extinct. Deep below us, the Earth’s magma could get angry again, just as it did all those thousands of years ago.

“This is totally possible,” he says. “And a new eruption would create a new volcano.”

Previous Article Book Review: If, A Mother’s Memoir by Lise Marzouk
Next Article Where to Stay and Eat in Ardèche