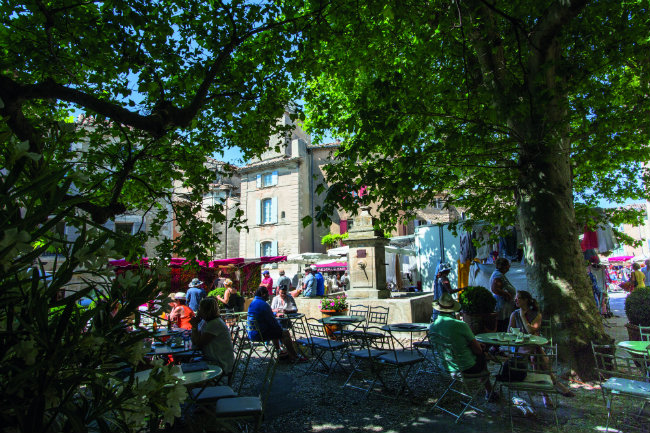 Jennifer Ladonne grabs her backpack and heads for the region’s hilltop hotspots to discover the gems lying off the main tourist routes.

Don’t think there aren’t discoveries to be made in the many hilltop (perché) towns of this well-loved pocket of Provence. A car is a must, but walkers will encounter the area’s glorious nature firsthand.

Three mornings into our stay in Goult, a tiny village perched above the Luberon Valley, we woke to find the front door of our storybook-charming townhouse ajar and our seven-year-old daughter nowhere to be found. So we did the only logical thing in a town of a few hundred inhabitants – we ran to the local café. There she sat at her own little table, croissant in hand, chatting with the regulars. Already on first-name terms with the owner, she also knew the names of every cat in town and had adopted the next-door neighbour’s tabby, Poochie, who spent the week lazing on our front terrace in the shade of grapevines and wisteria.

Not exactly the usual for an urban kid, but then this is Provence. More precisely, Goult is just one beguiling link in a chain of picturesque hilltop towns that dot the jagged mountain ranges of the Parc Naturel Régional du Luberon – part of Provence’s Vaucluse region – and the greater Vaucluse to the north west. The pace is slower here and a simpler lifestyle endures, despite the legions of tourists that invade every summer. 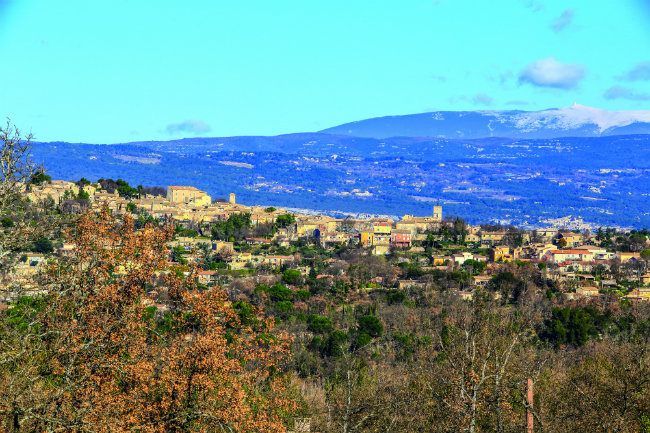 We were lucky to arrive in October, when the fields are burnished gold, tourist season is over and the “locals”, which include a generous number of expats who answered the call of a quieter life, are relaxed and engaging.

Though a cherished stop on the French tourist circuit, this unspoiled village is off the radar for many Anglophones and still undertouristed, as Provence goes. With a gourmet shop, a well-stocked greengrocer, a few artists’ ateliers, an upscale restaurant, bustling Café de la Poste – open all day – and a smattering of historic sites, Goult is the kind of town you might dream up as the perfect refuge. 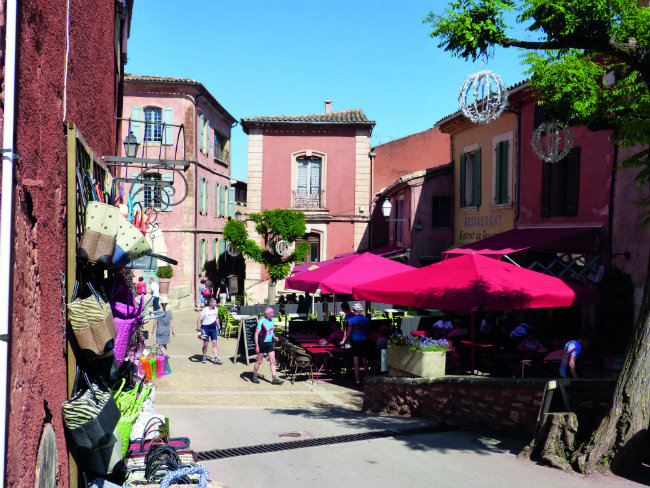 The village of Roussillon

The truth is, since the area was rediscovered back in the 80s, there may not be many unturned stones, but there are more than enough discoveries (or rediscoveries) for a happy week of village hopping. Delightful lodgings abound – some in themselves worth the trip – from which to launch investigative forays into the area’s many wonders.

Hewn out of granite and balanced on sheer cliffs with unending views of the valleys below, for centuries these villages served as strongholds against everything from invading Saracens and warring nobles to the plague. Some of them – Venasque, for example – remain a kind of layered testament to the many cultures that have populated the region over the past 2,000 years, beginning with the Celtic-Ligurians, whose sacred sites served as foundations for Roman temples that were in turn topped by Christian churches. 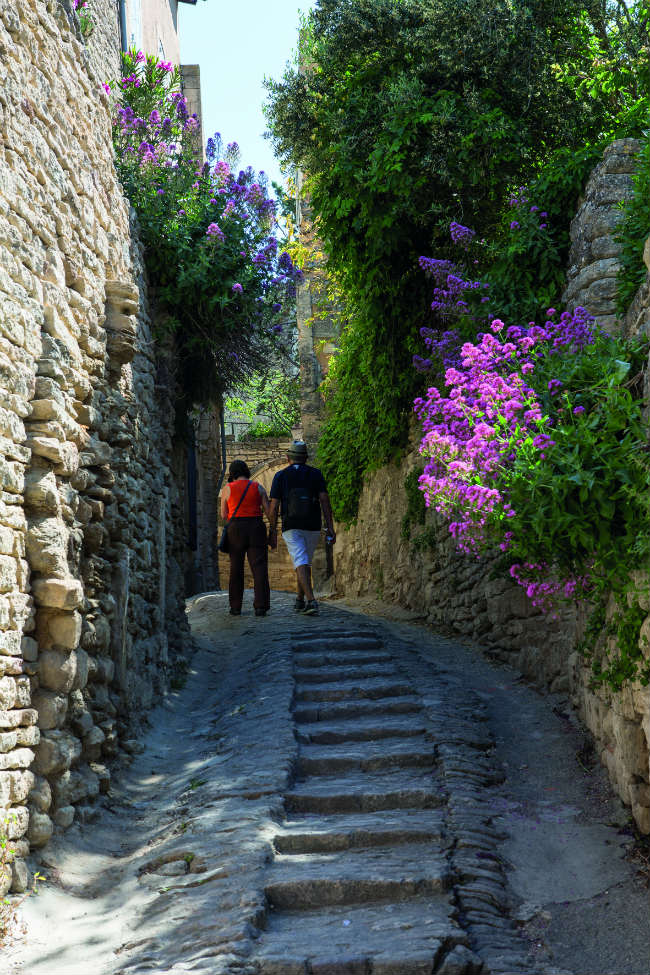 Though fortified in the Middle Ages with thick walls, well-guarded portals and usually a castle keep, few of the village châteaux survived the almost constant upheavals and are now mostly rubble. But the walls and portals remain in varying states of wholeness to provide scenic nooks for enjoying endless vistas of rolling vineyards, oceanic lavender fields, orchards, olive groves and farmland – sometimes with a glimpse of another hilltop town in the distance.

You can start your tour anywhere, but Gordes, the area’s scenic tour de force, is a good choice. Paradoxically, there is little to see here, aside from the 10th-century château, the town’s lovely cobbled centre and streets – meticulously restored in the 70s after the town was on the edge of being abandoned, having suffered tremendous devastation and loss of life during the Second World War – and the Tuesday morning market, in full swing by April. It’s the comings and goings from Gordes that astonish, and you have plenty of opportunity in the clog of tourists heading out of town for a breathtaking photo op. A favourite place for well-to-do Parisians and foreigners to snap up a second home, glamorous Gordes is also the setting for one of Provence’s few palace hotels, the newly-restored La Bastide de Gordes. 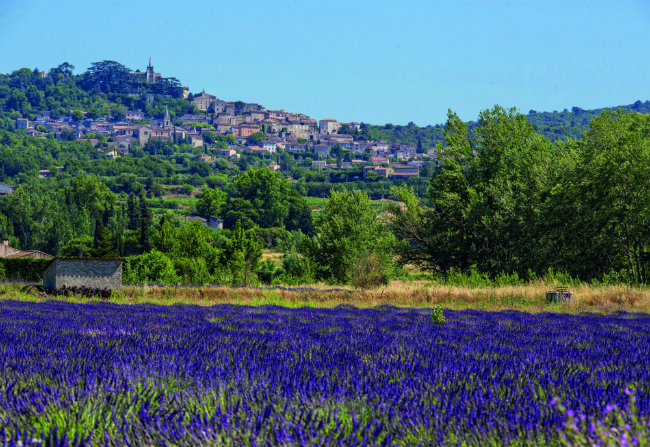 A few minutes down a narrow road to the north, the 12th-century Abbaye Notre-Dame de Senanque is the area’s other big draw. You’ll recognise it as the poster child for Provence, its elegant gothic walls flanked by vivid rows of azure lavender. Services are open to the public and a one-hour guided tour, in French, can be reserved online at its website.

Also consider a pit stop at the open-air museum Village des Bories, a town of curious stone huts built in the 18th century by Gordes farmers, while in nearby Coustellet, the Musée de la Lavande illustrates the making of AOC lavender essential oil. Visitors can stock up on its line of lusciously scented lavender skincare products at the boutique. 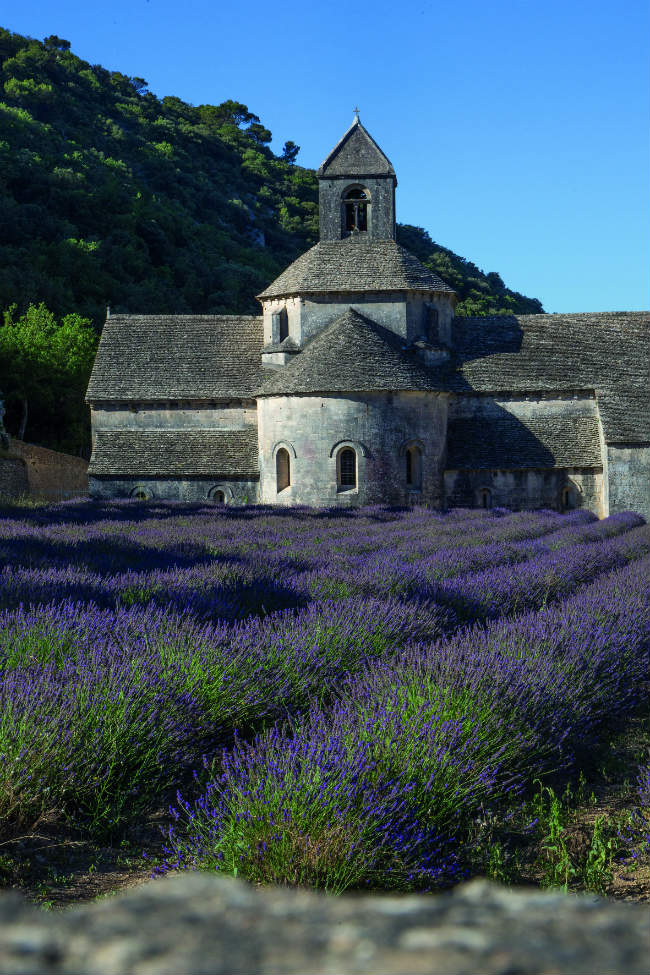 A ten-minute drive away, Roussillon’s pastel houses – ranging in hue from tawny marigold to rich watermelon – align like so many colour swatches of the area’s russet soil, which once provided most of the world’s ochre pigment. The winding village streets culminate in a circular lookout point near the old church, where your climb is rewarded with views of the town’s ruddy cliffs.

From here, loop down the D108 to Bonnieux, one of the more lively villages, whose many inviting terraces offer refreshment and relaxation before a visit to the Musée de la Boulangerie (bread making). On a fine day, you’ll see Gordes and Roussillon from the picturesque 12th-century church set among cedars atop the village. But for superlative views of the area and the Mont Ventoux, as well as cool walks on well-kept paths through miles of fragrant trees, head to the National Cedar Forest, just above Bonnieux. 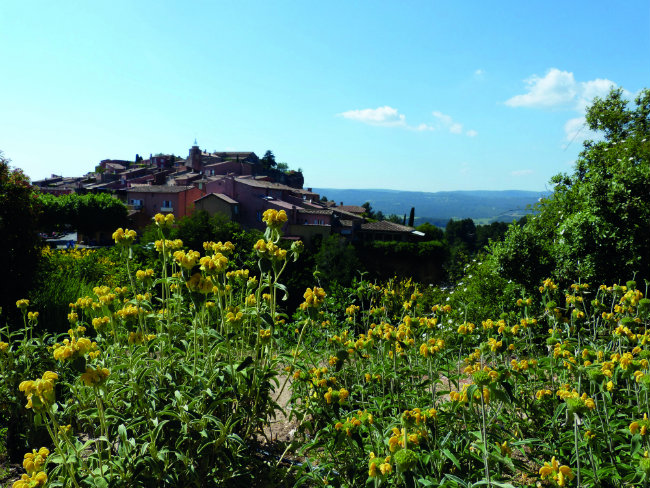 The village of Roussillon.

A quick detour to Lacoste affords more views from the poetic ruins of the Marquis de Sade’s château, before arriving in upscale Ménerbes for a meander around the town and lunch or dinner at a terrace café. At the top of the village, you can visit the elegant home of photographer and Picasso’s muse Dora Maar, in July and August; and Le Castellet, painter Nicolas de Staël’s château. Maison de la Truffe et du Vin du Luberon’s truf e-infused menu provides an excellent introduction to the area’s most prized delicacy paired with local wines, which you can stock up on in the restaurant’s boutique. If you don’t have time for lunch, stop in for tea or a glass of wine on the beautiful garden terrace, accompanied by cool breezes and views for miles. 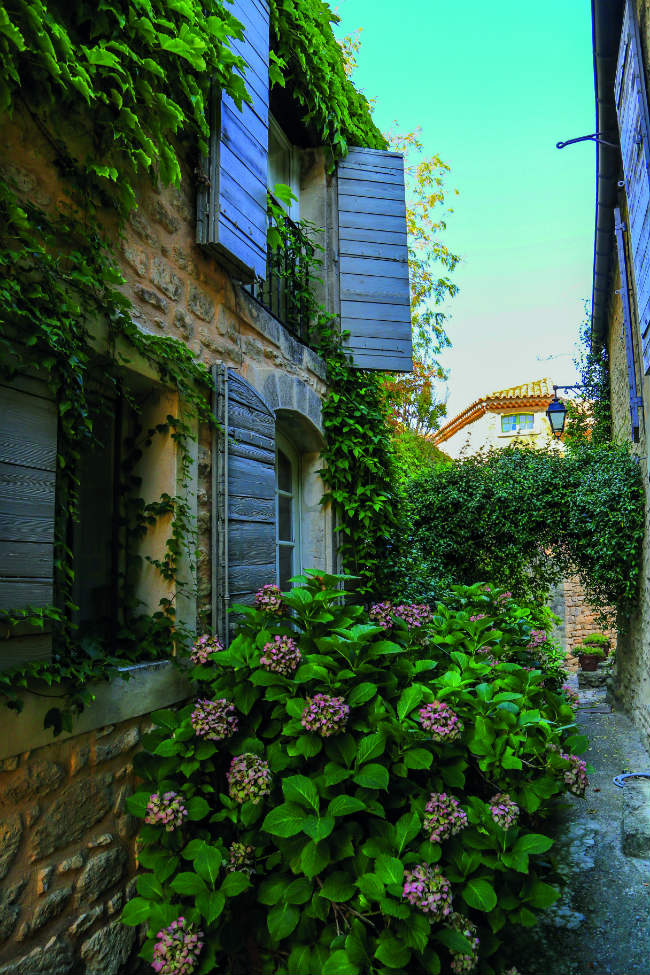 Leaving the area without visiting a wine or olive oil estate would be missing the heart of Provence. Bastide de Laval, in Cadanet – a short detour from Bonnieux, near lovely Lourmarin – offers tours, tastings and a well-stocked boutique with a handy boxed version of its award-winning produce to keep the oil from its worst enemies: light and air.

The recently-opened Domaine de Fontenille’s elegant grounds and beautiful, airy rooms make the perfect base from which to explore the area – that is, if you can tear yourself away. Being a wine estate, you’ll have ample opportunity to sample the vintages at its Michelin-starred restaurant or in the state-of-the-art tasting room, along with other local delicacies. 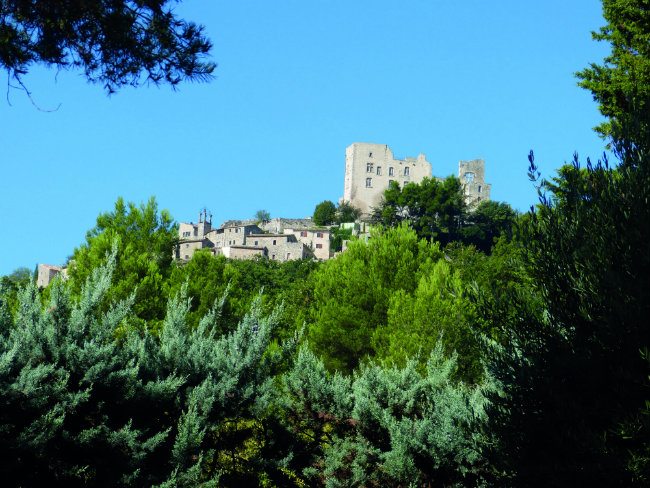 IN THE SHADOW OF VENTOUX

A fine introduction to the Vaucluse can be had by car, but it’s to walkers that Provence offers up its more clandestine treasures. Crowned by Mont Ventoux, whose pale limestone peak you’d swear was snow, even in the withering summer heat, the Dentelles de Montmirail provide a terrain of endless variety for those on foot. Travelling relatively unencumbered, with a daypack just roomy enough for lunch, some chocolate, maps, water and perhaps a raincoat, you can go village to village up and down mountains, through vineyards and cool forests over Roman roads, whose deep, chariot-hewn grooves are still traceable in the ancient stone pavement. 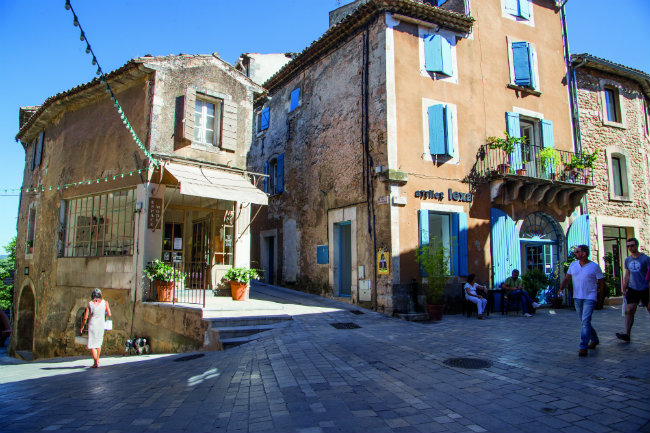 You can venture out on your own – most tourist offices sell detailed IGN (Institut Géographique National) maps of the area and can recommend walks from each village. However, a package tour is indispensable for arranging hotels and transporting luggage from place to place, leaving you unburdened by any logistics beyond where to have your next picnic.

We settled (again) on UK-based On Foot Holidays, whose detailed website offers several itineraries, including levels of difficulty and what to expect along the way. Every detail of the trip is managed, maps and directions are exemplary, and you’re totally on your own. These are not luxury tours, accommodation is clean, comfortable and welcoming – exactly what’s needed after a day of walking – with some lovely surprises along the way. 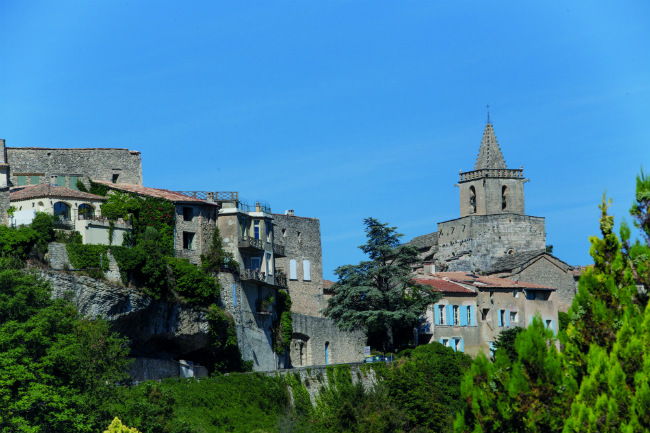 Hôtel Les Remparts in Venasque was one of them. Lodged in a 16th-century house off the town square, the hotel’s spare, whitewashed rooms are pleasantly bright and sprinkled with Provençal touches. It’s perched high enough to offer resplendent views, from the rooms and restaurant terrace. Venasque’s church, and especially the baptistry (whose many ancient elements remain a mystery), chronicle its centuries of inhabitants: Merovingians, Celtic-Ligurians, Romans and Christians. 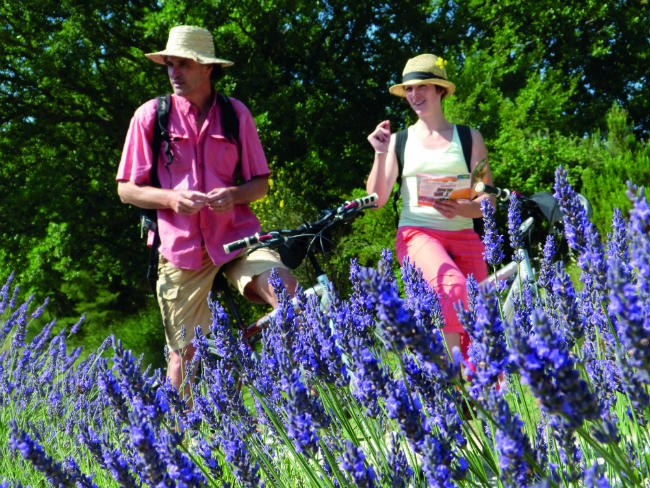 Off the main tourist radar, Mazan boasts the area’s best-preserved fortifications, with several intact portals and mysterious seventh-century stone sarcophagi in the village cemetery. From here, you can walk to charming Crillon-le-Brave, and, if you haven’t packed a lunch, dine luxuriously at the beautiful Hôtel Crillon le Brave, or very well on the terrace of Le Petit Crillon. Not all the villages on the circuit are perched, but the walk from Crestet – poised over the plains at eagle-eye level – takes you through forests straight to Vaison-la-Romaine’s old town. Arriving just after lunch leaves ample time to deposit your things at the hotel, cross over the Roman bridge and explore some of the vestiges of a Roman town and the Musée Archéologique. If you’re staying at Le Beffroi – an elegant 17th-century mansion – leave time for a dip in the salt-water pool and a glass of wine in the rose garden to take in the views. In the light of the setting sun, the north side of Mont Ventoux suffused with a rosy glow, you’ll be glad you took a detour off Provence’s main path. 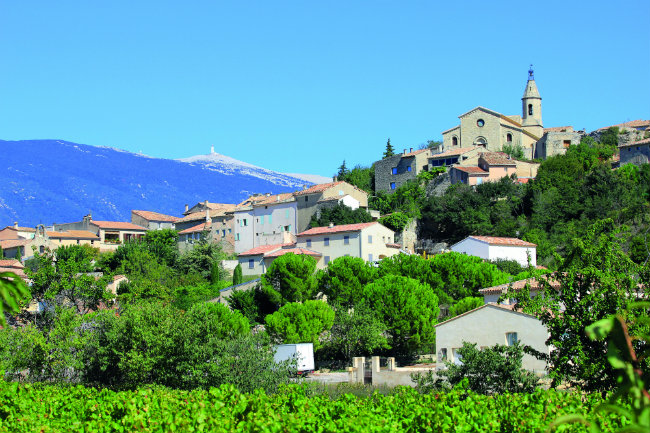 WHERE TO EAT AND STAY

If you’re looking to explore the sights and sounds of Provence then we recommend France Today Travels. They share the hidden corners of this marvellous region, with a base in the Southern Luberon Valley. More info 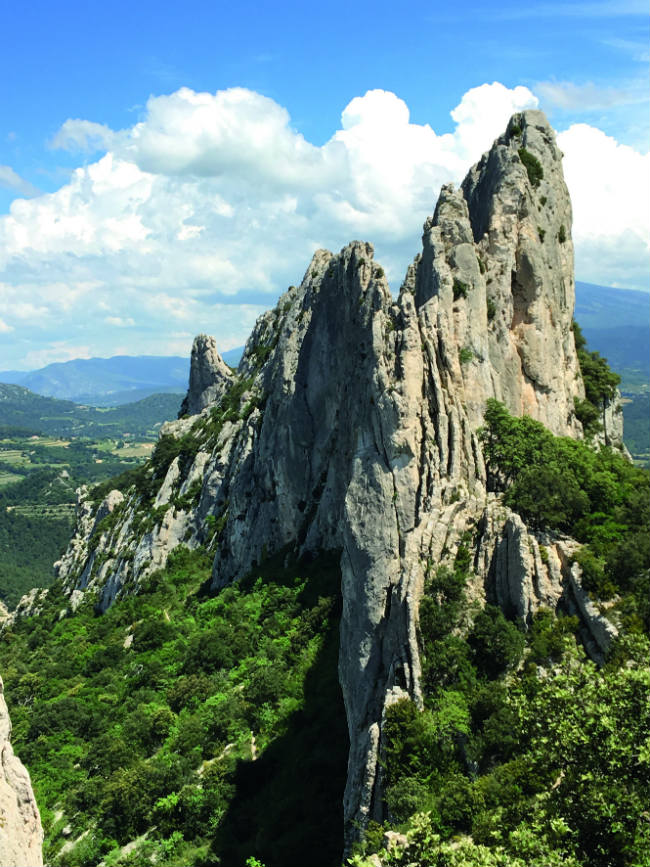 Previous Article Things to See and Do in Burgundy
Next Article Food Festivals in France: Journées de la Gastronomie in Èze, Côte d’Azur