“Wwoofing” Kismet in the Cevennes Mountains of Southern France 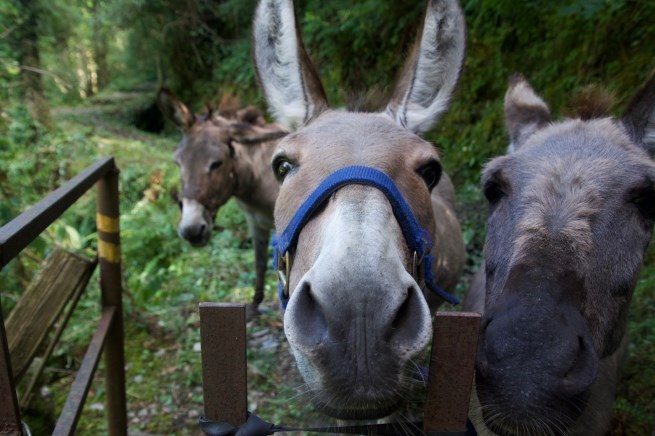 When my partner and I cast our proverbial net across the French farms listed on www.wwoof.net, fate intervened by matching us with just the right one: Le Lauzas, located in the Cevennes mountains of Southern France. As we would come to discover over the course of our seven-week stay, this ruggedly majestic area is inhabited by a small band of self-reliant, social utopists with a strong intellectual and artistic appetite—this is France, after all. Once we were installed in this stunning but unforgiving natural paradise, we were eager to see how this self-selected group carved out their existence.

The WWOOF acronym stands for ‘world-wide organization of organic farms’ and for those hip to ‘wwoofing,’ we would become known as ‘wwoofers.’ Wwoof.net is essentially an online network that matches farms in more than 120 countries with volunteers who agree to give 4-5 hours of labor per day (Monday—Friday) in exchange for free lodging and meals.

Felipe and I were looking for a farm in France where we could hang our hat for a while towards the end of a year-long travelling sabbatical. One goal of our time away had been to improve our French language skills—we thought wwoofing would be an inexpensive alternative to the courses at French language institutes in Paris and Hanoi where we had studied earlier in the year. Total immersion for free! 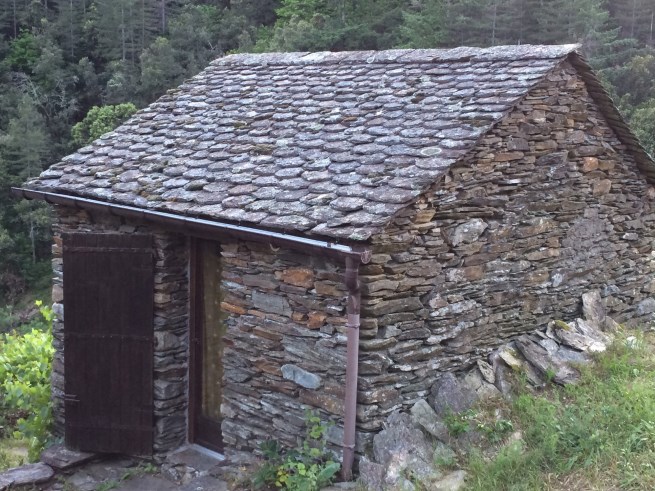 We ended up contacting about 15 farms in France via wwoof.net, heard back from five, and received invitations to become wwoofers in three different locations. In the end, we chose to go to Le Lauzas because our host, Olivier, seemed flexible and welcoming over email and there was the promise of our own, independent gite—a small, stone cabin that is part of the larger Le Lauzas mas (a property comprised of several stone structures including a large, main house).

From Paris, we took the train to Alès, where Olivier picked us up and then drove nearly an hour to Le Lauzas, located in the least densely populated area of France. Interaction with the outside world was not exactly seamless—we would not have a car while wwoofing and the closest watering hole involved a nearly two-hour walk on winding mountain roads and a shortcut through the forest. Rarely did a car pass for us to stick out our thumbs for an auto-stop (French for hitchhike).

Located in a small hamlet called St. Andeol de Clerguemort, Le Lauzas is situated in the rift of a rocky, densely forested valley—the ice-cold rivière Cougnet cuts through it, deep enough to take a full body dunk on days when the chaleur coming from the South gets too intense. The forest is dominated by pines and the Cevenne’s signature chestnut tree—des châtaignes (chestnuts) are used to make local delicacies, preserves and desserts. 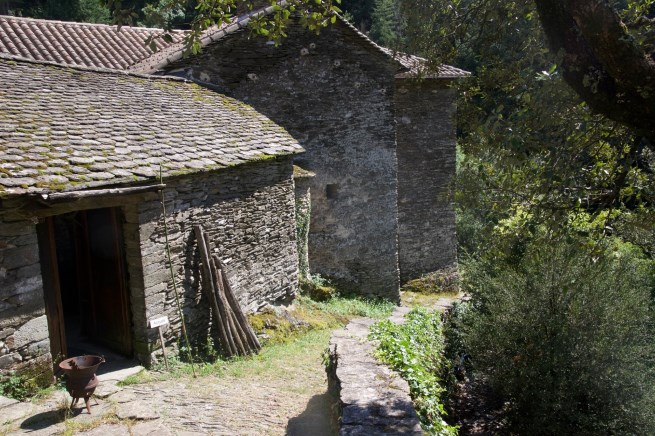 Pierrette Charton-Coudert (Olivier’s mother) bought Le Lauzas in 1965 and restored the original stone structures, transforming what used to be a sheep stable, hay storehouse and an iron forge into small cabins for tourists. Pierrette ran Le Lauzas as a B&B for nearly a quarter century and turned its management over to Olivier and his wife, Miriame, seven years ago. Together with Pierrette’s Renaissance companion, Eric Tamisier, this small ensemble guides Le Lauzas along its way, “not unlike a big boat navigating an ocean that is sometimes agitated,” according to Pierrette.

Although she has handed over the reigns so speak, Pierrette hasn’t given up what perhaps she loves most about Le Lauzas—inviting guests who have now become friends after returning year after year to wine and dine around her kitchen table. Felipe and I were fortunate to be counted among this intimate group and we traded stories of our life experiences (our French was on the up and up!), and we poured over photos from the early days of Le Lauzas, when most of the structures were in ruins. 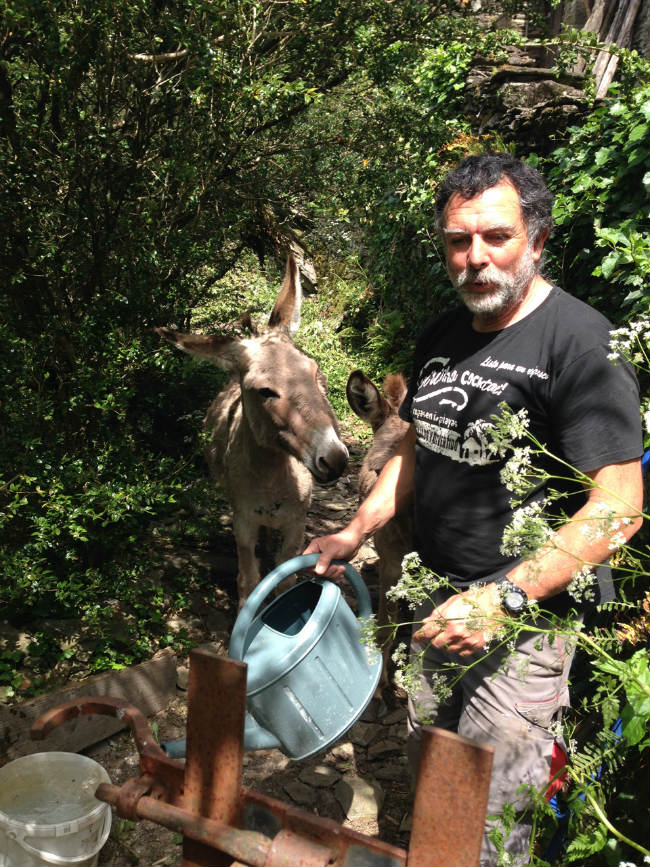 Pierrette regaled us with stories of ‘the old days’ when she and her first husband made a go of producing sheep-milk products from a resident flock. Her marriage eventually ended, and so did the sheep farming—the work was so demanding that at times she wanted to give up. She told us of the time she was so exasperated she conveyed to a then six-year old Olivier that she wanted to forego the “wild life” and move back to the city. Her young son’s response? “She must stay because if she left Le Lauzas she would never be happy.” Pierrette recognized the wisdom of her son’s prophecy. Perhaps a soothsayer in sheep’s clothing?

On weekends we had time to explore our surroundings and we learned that pierre sèche (dry stone construction) is an important part of the area’s patrimony—with great efforts being made in recent years to restore original constructions. Close to Le Lauzas is the Artisans Bâtisseurs en Pierres Sèches (Artisan Dry Stone Builders), which includes a professional association and school dedicated to preserving and developing this age-old building style that gives the area its characteristic look and charm. Large farmhouses, one-room cottages, stone-laid roofs, property-dividing walls and forest pathways are made using this ancient, zen-like technique of placing just the right rock in just the right place to create a puzzle-like formation. 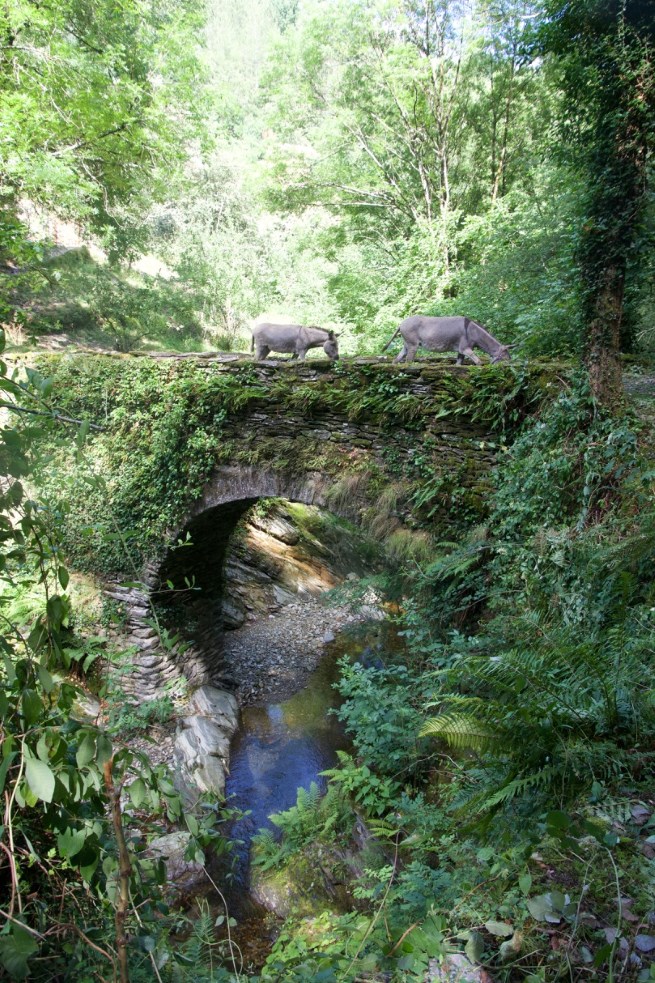 Technically speaking Le Lauzas is a gîte d’étape or chambre d’hôtes which translate roughly to ‘stone house available for overnight’ and ‘bed and breakfast.’ While we knew we would be helping out with guests, we didn’t fully appreciate the scope of Le Lauzas until the first group of 20 arrived on foot with donkeys in tow carrying luggage, provisions and the occasional tired child. I quickly read up on Robert Louis Stevenson, well-known author and ‘avant-garde hiker’ from Scotland who wrote the widely-read and well-loved Travels with a Donkey in the Cevennes. Largely based on Stevenson’s travel diary written during his 12-day trip with his donkey Modestine, the book made it possible to trace what would later become Le Chemin Stevenson (The Stevenson Trail) and paved the way for donkey treks which continue to be popular in the region.

Occasionally catering to guests included learning how to prepare tagine in traditional pottery (Pierrette has a connection to Morocco) for group dinners and serving breakfast à la française—pain au chocolat, baguette, jam and butter, and tea and coffee drunk from bowls. But most of our time was spent planting, tending and watering a garden that included nearly 200 plants—lettuce, tomatoes, zucchini, eggplant, peppers and cucumbers—to be harvested for meals prepared for Le Lauzas’ guests during the high season. We did other assorted tasks too, like preparing soil for planting beds, weeding, pruning, mulching—Le Lauzas is over 20 hectares so there is always something that needs to be done. 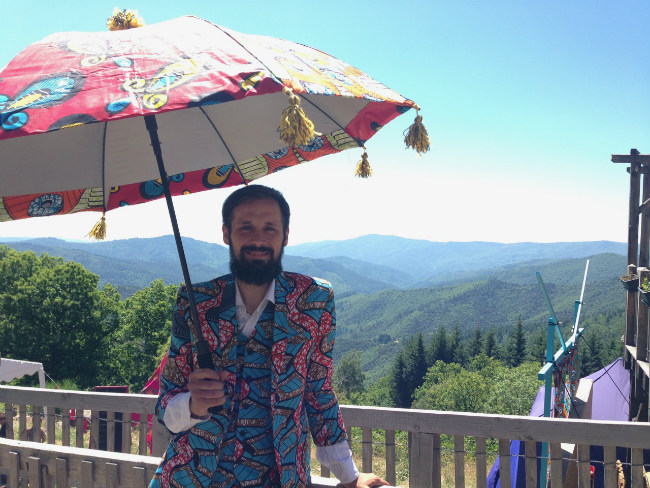 Weeding the garden often seemed a fruitless activity of trying to tame a wilderness that would never relent. But there was something very satisfying about watching zucchini and eggplant flowers blossom from seeds in their resplendent yellow-orange and violet, and sitting down to a homemade dinner and watching the sunset after a hard day’s work with no late night emails to dash off. Our tasks also included care of the resident donkeys of Le Lauzas—Tramontane, Annette and Bourrique. This arrangement began when Felipe was asked to fetch two of the donkeys that had escaped and gone missing for a week—they had been hanging out with some donkey friends about an hour’s walk away until a neighbour called to say the party was over.

During our free time, we got to know the local cast of characters at community events that included screenings of the latest award-winning films, a documentary film festival and an evening of outdoor music—food and beverage was often available at no charge or for a small contribution. One community focal point is the L’Espinas Roadhouse Bistro, with a cozy interior and a large terrace perched on a ridge with an exquisite view of the layers of blue-green mountains. L’Espinas is run as a community association—the village mayor is also the chef de cuisine! Week after week, we watched a group of community volunteers complete a pierre sèche structure that will eventually operate as a community brick-oven house—for anyone who wants to bake their own bread, pizza, etc. 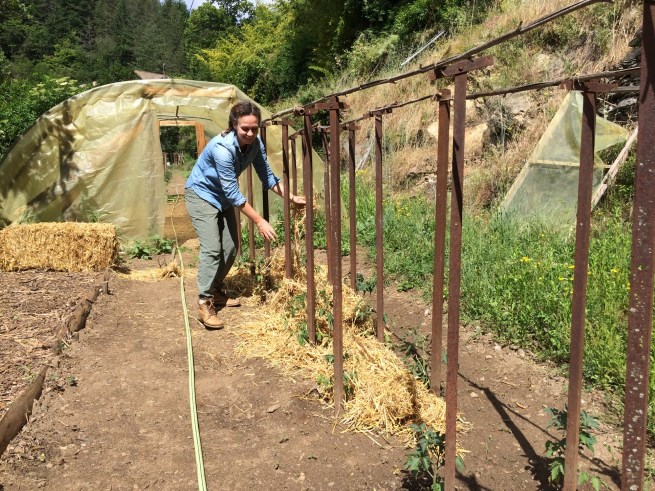 L’Espinas also hosted a ‘gastrosophique’—a concept for a community banquet coined by the utopian socialist philosopher Charles Fourier. According to Fourier, the gastrosophique is a type of socio-political act that simultaneously values the variety of dishes, the choice of guests, and the quality of conversations and relations that ensue. The event was hosted by a group of community actors dressed in finely tailored suits made of African wax cloth who read from Fourier texts, beginning with an incitement to throw the greedy, the penny-pincher, the vain, the small-minded, the intolerant, the jealous, the hoarder, the racist, the classist, the violent, the selfish, the sexist and the homophobic over the mountain, and ending with instructions for a group dishwashing session. In between, we sat down at large, artfully-laid tables to enjoy a live gypsy jazz band and food that had been contributed by local residents. Fourier wrote that the gastrosophique was an opportunity for participants not only to satisfy their appetites but also to show off the excellent products produced on their farms and compare techniques of producing “petites pâtes et poires” (pasta and pears).

The interdependent nature of the community was further reinforced when we arrived to L’Espinas for our last Sunday lunch (a tradition we had kept over the seven weeks) and the news of Felipe’s recently broken leg had already circulated. “Something happened to the wwoofers of Le Lauzas” was the word in the Cevennes. In our final week, while clearing cut branches from the donkey park, Felipe fell into a gap in a rock wall and fractured his fibula in two places. We chalked it up to being part of the adventure but there is no denying that the Cevennes is a place where it is most certainly man vs. the elements. 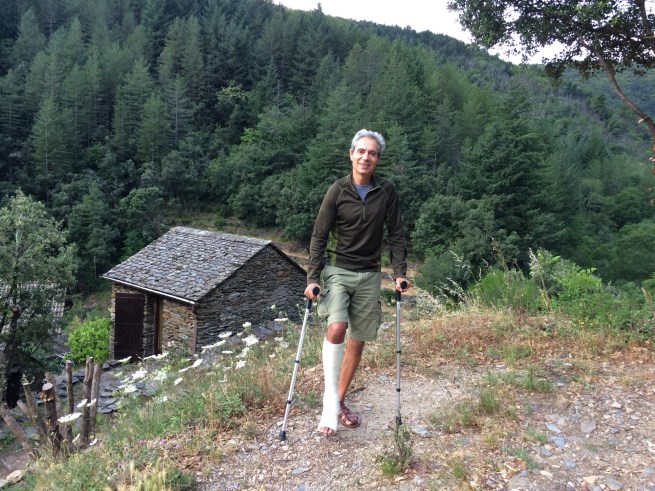 With or without the plaster cast as a memento, we will never forget our time at Le Lauzas. There are theorists who talk about a ‘sense of place’—I think I know what they mean after being ensconced in this wooded valley, removed from the trappings of urban life, where the river never stops flowing, and where solace abounds. Perhaps Pierrette said it best when she told me, eyes filled with water, that she hoped that Le Lauzas would be for us, like it is for others, a place to ressourcir. When I asked my smart phone dictionary to define ressourcir it said to ‘recharge one’s batteries.’ Fair enough, I thought, but I preferred my own definition, which was to return to the source.

Previous Article All Hail the King of Pork: Interview with Stéphane Reynaud, Plus Recipes
Next Article Where to Stay in Gascony: La Bastide en Gascogne