Into the Wild: A Hiking Adventure in the Pyrénées 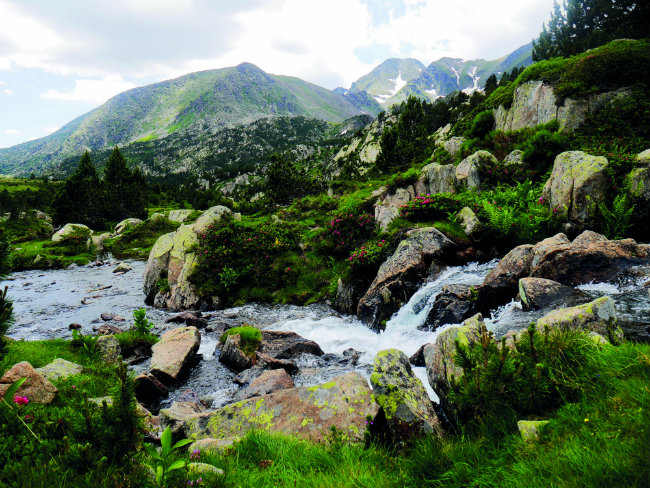 The trail had gone cold.

After hours of bog-hopping through Cerdagne’s rain-lashed wilderness in hot pursuit of the GR hiking route’s elusive yellow-striped markers, we had hit a snag. The path had petered out into nothingness. Not a yellow dash in sight. The promised bridge had yet to materialise… River wading it was, then. Hair plastered to our faces and trousers rolled up to our knees, we stared into the mouth of the crashing brook, as though about to leap off the Titanic. Cerdgane un – City bumpkins nul points… 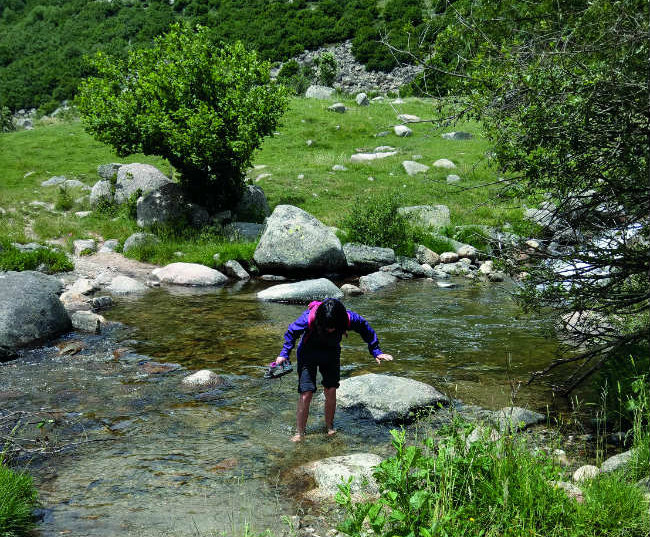 We weren’t the first – and certainly wouldn’t be the last – to be thrown off by the Pyrenean plateau’s meandering patchwork of (occasionally waterlogged) uplands, pine forests and wildflower meadows. The place is a geographical minefield, courtesy of the almighty turf war between France and Spain and ensuing centuries of border flip-flopping.

Add to this a mind-boggling Russian-dolls layout – smack bang in the Parc naturel régional des Pyrénées catalanes (this is Catalan heartland, all right), itself spreading across the Pyrénées-Orientales département, the lot within the Occitanie region… those who can pin down this slippery borderland are few and far between. Little wonder our inner compasses had gone haywire.

Trudging through the bitter-cold stream, flickers of silver caught the corner of my eye beyond the thicket. Low and behold, the invisible bridge… 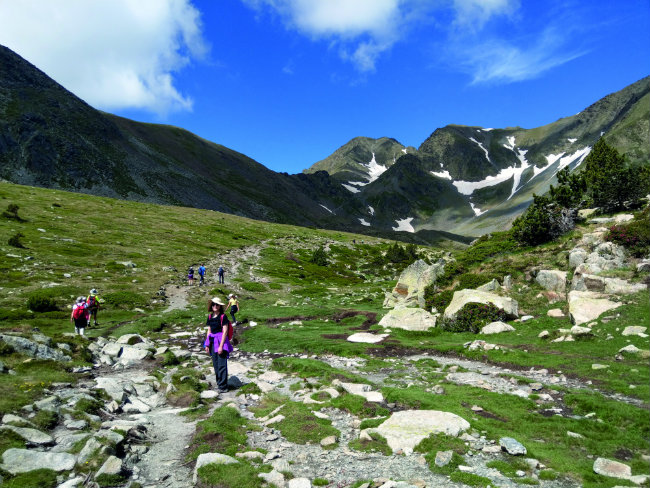 The climb up the Pic Carlit has its fair share of challenges. Photo: Sean Cameron

Our journey had got off to a mishap-free start three days earlier. Armed with a wad of maps and step-by-step itineraries (thanks to Purely Pyrenees, who, in their infinite mercy, had thrown in luggage transfers) and enough cereal bars to wait out a zombie apocalypse – but sans survival blankets, which the hotel receptionist assured us wouldn’t be necessary in this heatwave – we had set out on the Yellow Stripe Road, aka the GR route, from the hamlet of La Llagonne, as though off on a military expedition. Just as well, since we were headed for the Vauban-fortified town of Mont-Louis: one of France’s last ‘working citadels’ and home to its most cut-throat commando training centres, the aptly-monikered 1er Choc. Built from the ground up in a record two years to defend the border with Spain following the Pyrenees Treaty of 1659, and flanked by the dab war engineer’s trademark overkill of bastions, half-moons, booby traps, and enough ditches to ward off anyone with a mind to storm the citadel, it was never taken. 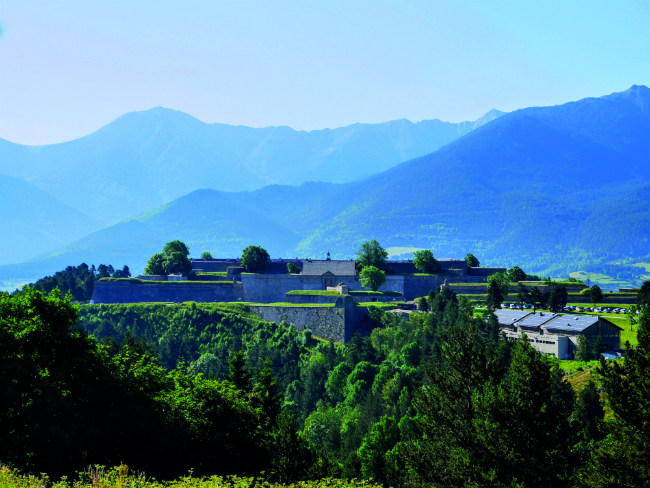 These days the impregnable ramparts have been reclaimed as a breakneck climbing wall and parkour course, complete with pegs and zip wires.

“They kidnap journalists here,” our guide Sylvie threw in casually, motioning to us to huddle by a “Beware Explosives” sign. Among its many sidelines, the training unit will gladly “rough up” war correspondents, ostensibly to teach them how not to get kidnapped but, in case the worst happens, how to cope in a real-life hostage situation. “They go without food, there’s music blasting constantly so they have no idea whether it’s day or night… it’s no walk in the park.” Although, Sylvie added knowingly, the sleep deprivation and rough-housing pale in comparison with the gruelling survival bootcamp SAS-style rookies are put through. “They sleep five hours a week, we see them sometimes in town wolfing down pasta when they’re done. They look a right state.” 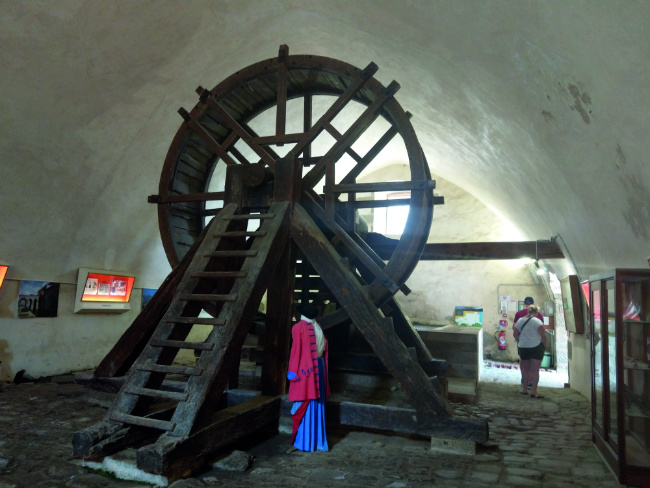 After years of cordial if frosty cohabitation between townsfolk and the regiment, Sylvie eventually convinced 1er Choc to allow the public into the soon-to-be UNESCO-listed stronghold year-round, in between drills or, as the case was for us, at the tail end of one – the formation breaking up just long enough for the commander to greet her with a peck on the cheek.

“We settled it over a drink,” she downplayed the whole affair. “I barged into the office, asked them when combat training was and worked around it.” She did far more than “work around it”. Not only did she successfully (and virtually single-handedly) mastermind the fortress’s UNESCO World heritage bid in 2008 but she “borrowed” the regiment’s divers to spruce up the fortress’s rubbish-strewn 17th-century Puits des Forçats (Well of the Convicts). A life-size torture contraption, and one of just three such wells left in France, it was used to discipline insubordinate soldiers, who were forced to tread on its hamster wheel for 12 hours on end to draw water up the 28m shaft.

And the elite divers scrubbed up more than sludge. Amid the 4m-deep flotsam were unearthed centuries-old doors, shoes, four antique well buckets, chicken bones… and a few cats and dogs. On that nugget, the blast of a trumpet called us back to order. The military was reclaiming the base for now. Off, then, to the perched village of Llo for a leisurely dip in its (blissfully pong-free) sulphurous hot springs, hooked up, it turned out, with underwater music. I could get used to this hiking lark… 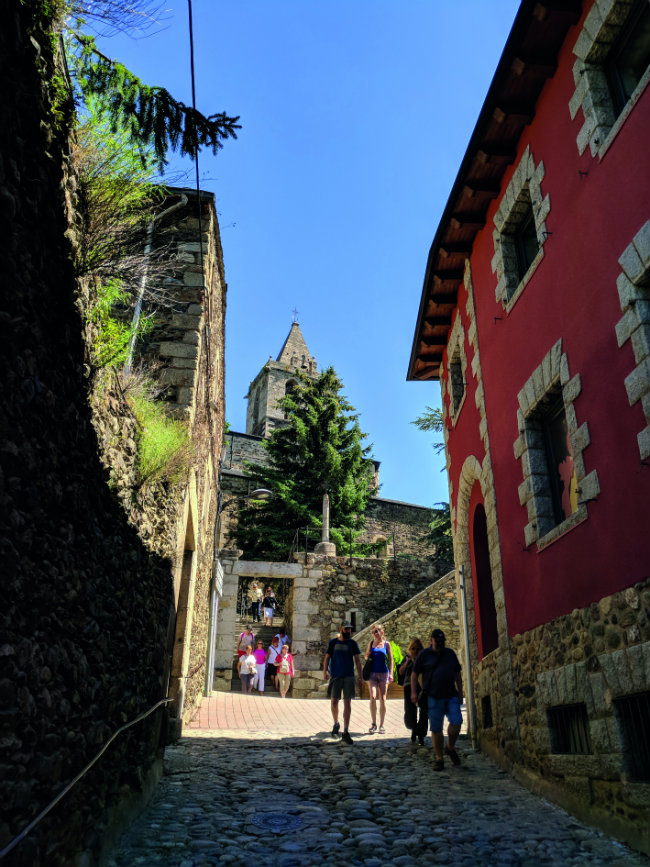 French is strictly interdit in the Catalonian town of Llívia. Photo: Sean Cameron

IT’S OFF TO SPAIN WE GO

Border flip-flopping is not just a quirk of history in these parts; to this day, it’s an occupational hazard. So we discovered bright and early the next day, when the Yellow Stripe Road stopped dead at a rather battered sign informing us we’d stumbled into Llívia – España (!). Following the Treaty of the Pyrenees in 1659 (it really does have a lot to answer for), Spain ceded 33 villages of Cerdagne to France, including its historic capital of Llívia. But the Spanish ruler cried foul, arguing that Llívia was in fact a “villa” (town). Louis XIV grudgingly agreed to hand it back and the slate-roofed nook has been a Spanish enclave (or exclave, depending on your perspective) entirely surrounded by France ever since. 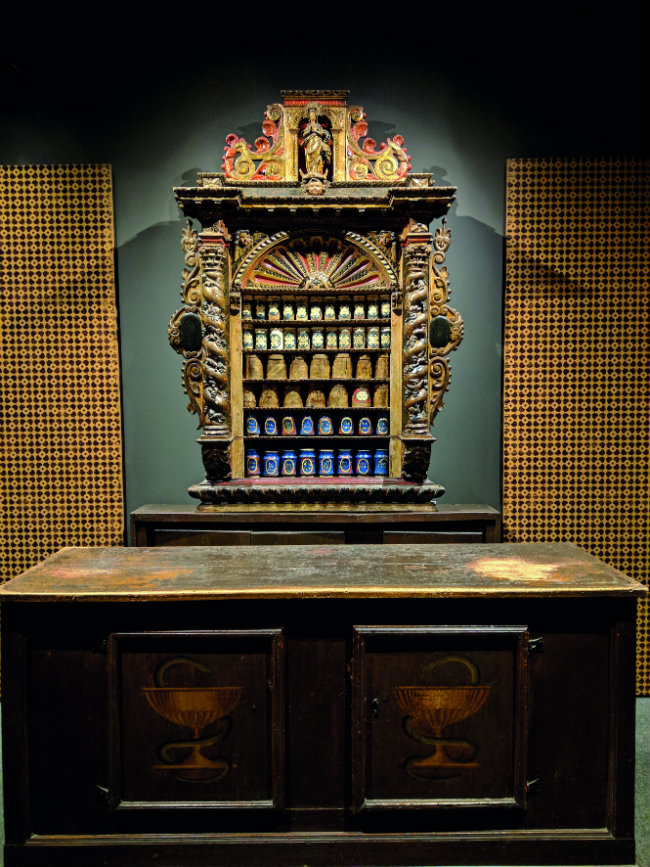 With Estelada flags uttering against blush-hued stone houses and a strict no-French-spoken policy in most bodegas, it is a firm bastion of Catalonia. Buying sun screen at the pharmacy soon descended into a fraught game of hand miming and garbled Castilian; while at the bakery in the cobbled market square, patriotism reached full tilt with neither French nor Castilian allowed. Not just a mere historical (and geographical) hangover, Llívia is a living cabinet of curiosity and, among its many claims to fame, the birthplace of one of the oldest pharmacies in Europe thanks to the bountiful supply of medicinal plants sprouting in every corner of the Pyrenean nook. Although closed since 1926, you can have a nosey at the Esteva apothecary’s collection of intricately painted 18th-century pots and tumblers neatly laid out in replica display counters at the local museum. 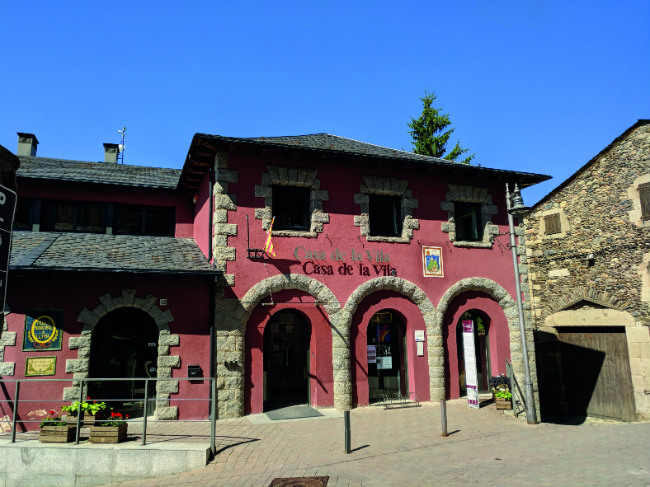 Stuffed to the gills with sugar beignets – as far as we could make out – we dawdled the half mile or so back to the ‘border’, ready to play peekaboo with those pesky yellow dashes en route to the nearby Bains de Dorres. Unlike their stink-free neighbour back in Llo, Dorres’s Roman Baths pack quite the whiff. Handy if you are directionally challenged. Eye-watering, eggy wafts guided us right to the front gate. Framed by the Canigou massif and purported to heal every ill imaginable from rheumatism to chicken pox – according to a fellow bather, whose pockmarked son splashed about in the shallow pool oblivious to the widening circle around him – the 19th-century baths are a sensory potpourri, an odd blend of nose-wrinkling torture and sheer sybaritic bliss. That is, until the sweet release of olfactory fatigue. Under strict orders not to shower, to allow the natural minerals to work their soothing magic, we hit the road once more floating on cloud nine – and stinking to high heaven. 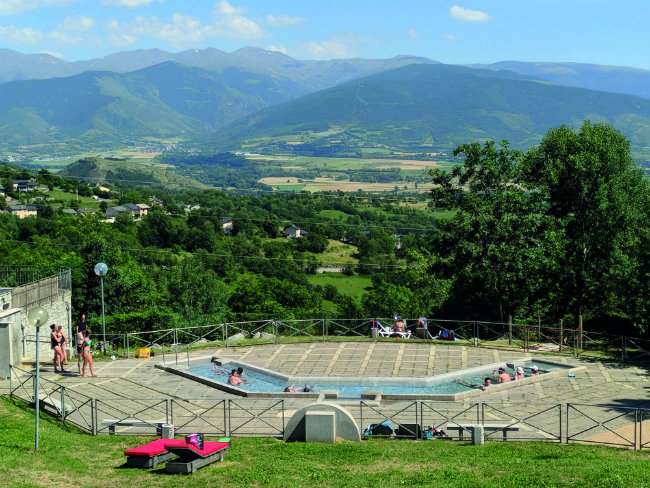 The following matin was the start of our adventure proper, heralded by an almighty downpour after days of glorious sunshine. No more getting spoiled rotten (literally) with mid-afternoon dips, lazy sun-dappled strolls and befriending pooches – our doomsday supply of rations drew quite the pack of pets on our travels. No more sightseeing. Just us, a map and Mother Nature. We would head off into the wild, accidentally trudge through rivers and eventually conquer the Pic Carlit, the Pyrénées-Orientales’ highest summit at 2,921m. 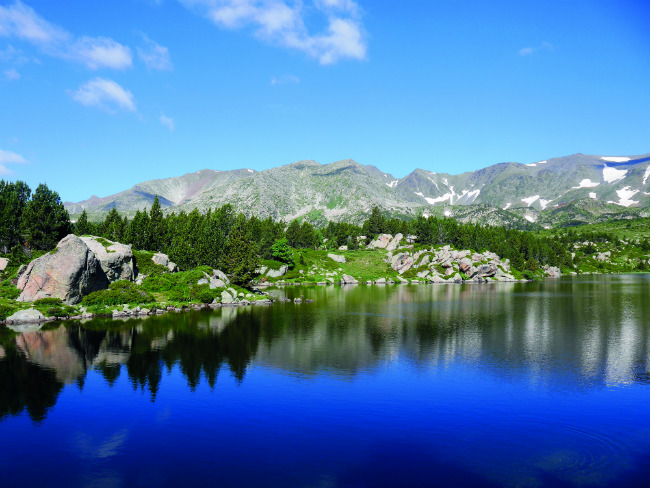 Geared up to the hilt for the gruelling 1,000m climb, we inched our way up the Boucle des Étangs du Carlit – a loop of crystalline lakes snaking around the mountain’s still snow-dusted approach. Slow but steady, we scrambled over the boulders carpeting the valley, pointedly ignoring the stream of limber pensioners, children and one flip-flopped teen (I kid you not) overtaking us at every turn. Spying a group of burly lads taking one look at the crumbling scree and hightailing it back to the col, I seriously considered calling it quits. Reading my thoughts, my partner nudged me forward in an uncharacteristic feat of bravado, just as a strapping gent of at least 70 (a conservative estimate) pelted past us, sparking a mini avalanche of tumbling rocks with each stride. Oh boy.

Almost vertical, shale sliding underfoot, we went into full-blown hand-climbing mode. Clinging on like limpets, scared stiff to glance up or down, we hauled ourselves to a craggy ledge just shy of the needle-like peak. Then, we drank it all in. Miles of lake-studded valley stretched ahead of us, framed by ribbons of mountains. Short of Champagne to toast our epic clamber, we broke out the Babybels. 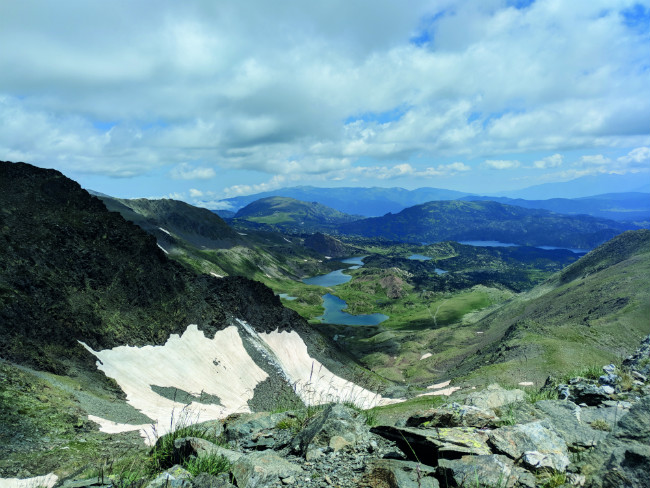 The view from the top of the Pic Carlit. Photo: Sean Cameron

Marion’s self-guided hiking holiday was organised by Purely Pyrenees. The walking and cycling holidays specialist provided detailed maps, step-by step itineraries with various levels of difficulty, as well as luggage transfers between hotels for a worry-free journey. To find out more, go to www.purelypyrenees.com 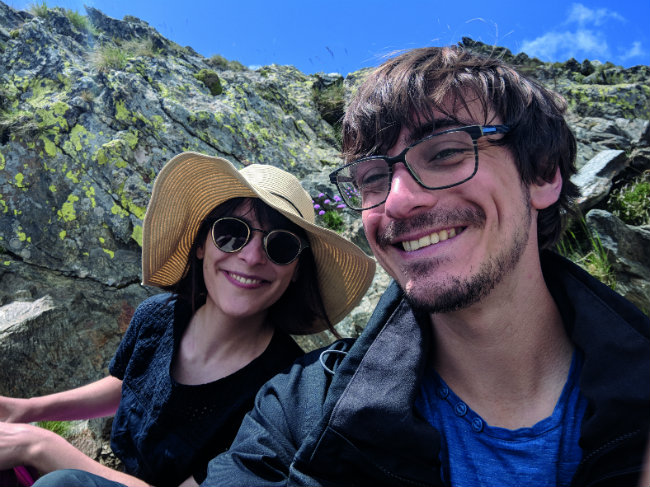 Marion and her partner, Sean, after their epic climb

Previous Article Win a Balloon Flight For Two Worth €1,000
Next Article Äponem: A Talked-About Gastronomic Destination near Béziers