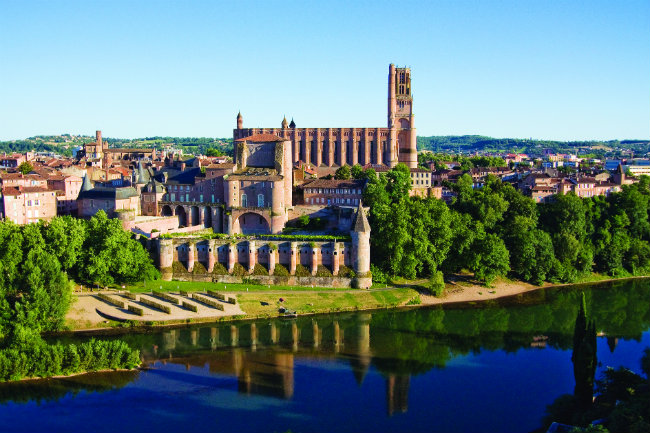 Albi: Gateway to the Tarn

The capital of the Tarn, and a UNESCO World Heritage city, Albi is a portal into the world of the Cathars. Indeed, its crowning glory, the Cathédrale Sainte-Cécile, was built to send a message from the Church to the Cathar heretics: we have the power. The fortress-like cathedral was built between 1282 and 1480, from the famous red bricks which give rise to Albi’s nickname, la ville rouge. Said to be the largest brick building in the world, it is an awe-inspiring vision, its bell tower standing 78 metres above the widest nave of any Gothic church in France. Its interior features a majestic choir with wonderful stone filigree work, a wall covered with one of the oldest frescoes of the Last Supper and a vaulted ceiling with Renaissance frescoes.

Next to the cathedral, also in red brick, is the Berbie Palace, the former home of the Bishops of Albi. This houses the Toulouse-Lautrec Museum, which has the largest public collection of the Albi-born artist’s oeuvre, with over 1,000 works, including his famous posters. 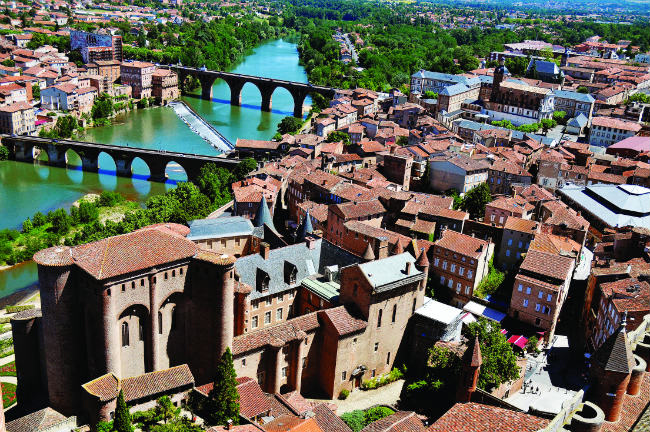 Today, Albi benefits from years of conservation and preservation to its architectural heritage and there are several historic districts to explore. Castelviel, the ancient centre of the city, near the Cathedral tower, is an area of narrow, cobbled streets, small squares and medieval houses, built in a mixture of colombage and red brick. Castelnau borders the southern edge of Sainte-Cécile Cathedral and has many beautiful houses that once belonged to the most important citizens of Albi. In Combes, along the banks of the Tarn, are the fortifications enclosing the Berbie Palace – the bridges which span the river include one of the oldest in France – and the patchwork of beamed medieval houses, towers, and terra-cotta roofs rising above you. The Saint-Salvi district was the old artisans’ quartier; the Lices and Vigan areas the former business districts, where many houses hide sumptuous courts behind their brick façades and wooden gates. For more information, visit www.albi-tourisme.fr. 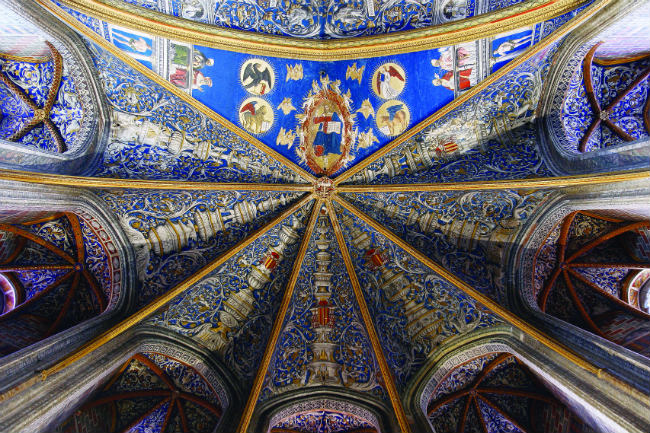 Les voûtes, or vaulted ceilings, of Albi Cathedral are in themselves a major work of art. Photo credit: city of Albi

Château du Bosc: Outside Albi you can visit the childhood home of Toulouse-Lautrec and learn about the influences that shaped his career. Visit www.chateaudubosc.com

Tarn Cruise: All aboard the gabarre for a river cruise! See the city from a new perspective. (Navigation from June till September.) Visit www.albi-tourisme.fr

Blue dye: Albi was once a major centre of woad production. Shop for your souvenirs here… Visit www.grainedepastel.com

Albi City Pass: €12 buys a city pass that gets you into all the main attractions, as well as discounts at shops and restaurants. Buy from the Tourist Office. 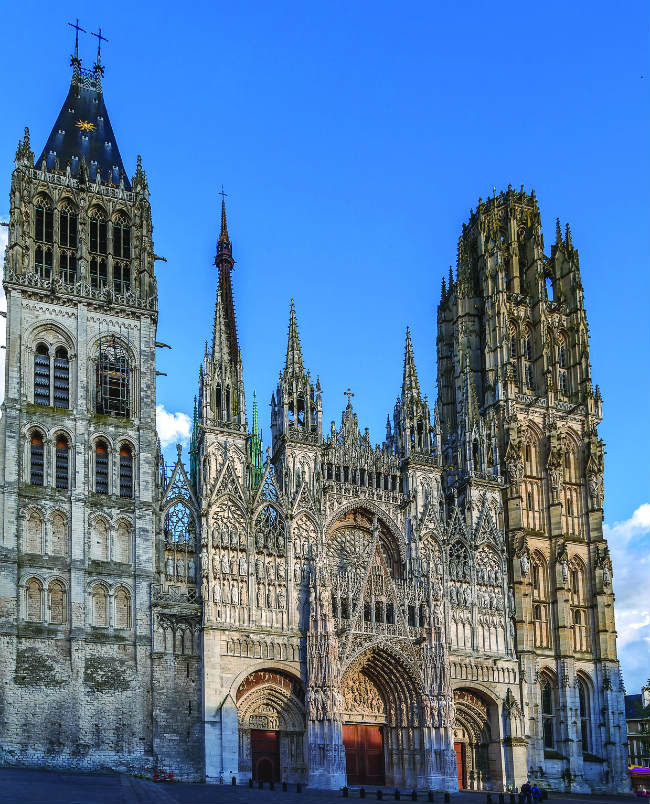 Rouen, forever linked with historical figures such as William the Conqueror, Richard the Lionheart and Joan of Arc, is a must-see for any visitor to France. In the Middle Ages the city was one of the most prosperous in Europe and the legacy from those times is found in the wonderful vieille ville, a pedestrianised warren of cobbled lanes lined with half-timbered merchant houses and shops, punctuated with splendid ecclesiastical buildings.

At the heart of the city stands the Cathédrale Notre-Dame, one of the finest examples of Gothic architecture in the world. The sense of space is awe-inspiring and there are many unique features, including the dramatic height of the nave, original stained glass from the 13th century, the fascinating Booksellers’ Staircase, the Chapel of Joan of Arc, and the neo-Gothic spire, the tallest in France, made of ironwork and added in the 19th century. The western façade is associated with the Impressionist art of Claude Monet. Nearby, at the Bishop’s Palace, is the site where Joan of Arc was convicted and sentenced to death. It now contains the compelling new museum, the Historial Jeanne d’Arc. For more information, visit www.rouentourisme.com 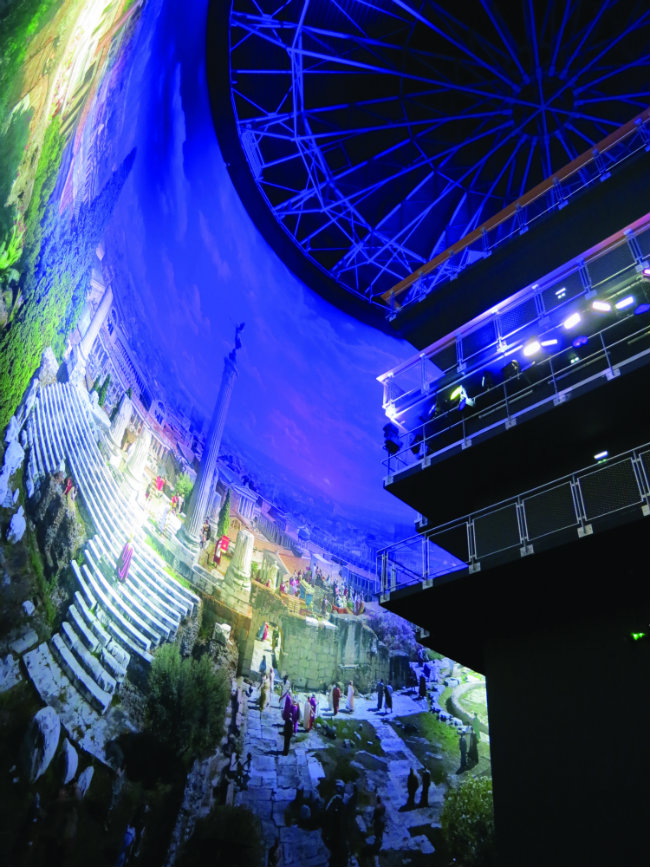 Panorama XXL: Rouen’s latest attraction is a showcase panorama of Rouen as the city would have appeared in 1431. Visit www.panoramaxxl.com

Le Gros Horloge: This 15th-century astronomical clock sits proudly on a Renaissance archway and is the pride of Old Rouen.

Son et Lumière: From June to September the Cathedral is lit up with a magical light show depicting famous scenes from Rouen’s history. Visit www.rouentourisme.com 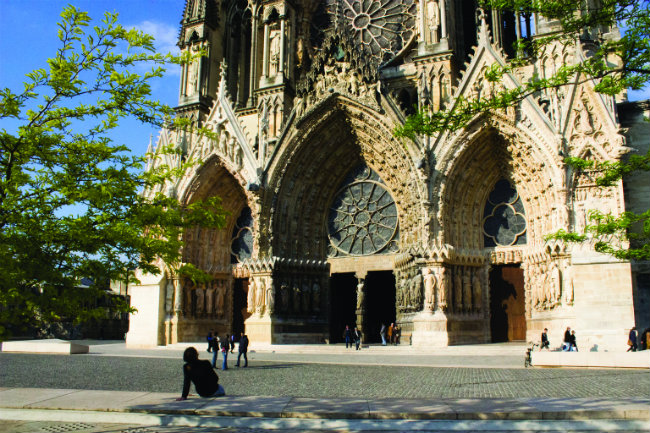 As it’s just 45 minutes by train from Paris there’s no excuse not to discover the rich history and culture of this famous city. A weekend break is even better because Reims is double-blessed with its unmatched champagne heritage and a fabulous Gothic cathedral.

Today it forms part of the newly-formed Grand-Est region, but it was already a major city in Roman times, and prosperous through the Middle Ages and into the era of Louis XIV, when champagne production began to expand. The city suffered during WWI but was rebuilt between the wars, preserving the medieval architecture and adding some gems of Art Deco. At its heart stands the Cathédrale Notre-Dame, a Gothic masterpiece decorated with fabulous carvings, statues and stained glass windows.

There are events throughout the year, and when you’ve shopped and eaten and seen the sights you can tour the Champagne vineyards. No wonder UNESCO World Heritage accolades have been bestowed not only on the Champagne hillsides, houses and cellars but also on the Cathedral, the Bishop’s Palace and the Saint-Remi Basilica. For more information, visit www.reims-tourisme.com 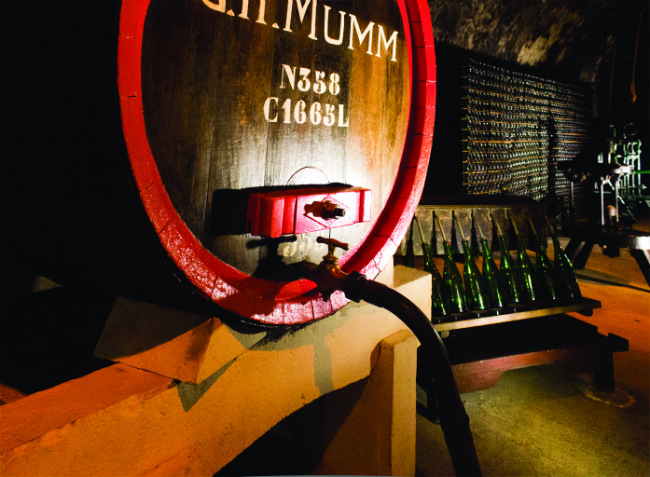 Champagne Routes: Meander along the Champagne Tourist Route or take a guide to tour the cellars and vineyards. Visit www.champagne.fr

Remembrance Sites: Visit the museums, memorials and monuments dedicated to the memory of the 4,567 soldiers and 740 Reims civilians who died in the Great War. Visit http://centenaire.org

Pâtisserie l’Opéra: A pilgrimage destination for foodies with a sweet tooth. Visit www.patisserie-lopera.com 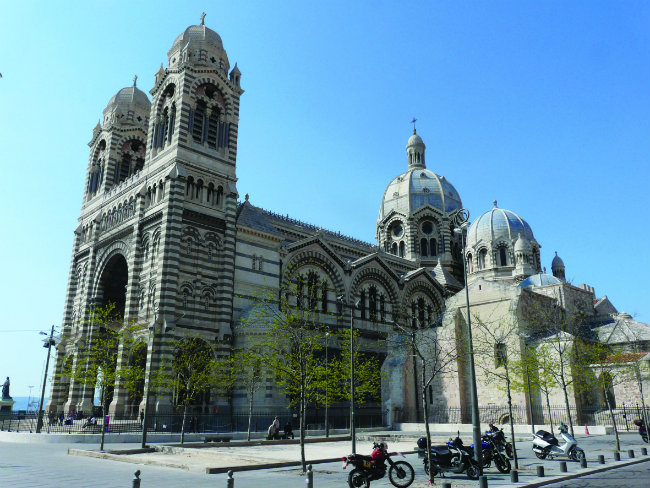 Spurred on by its status as European Capital of Culture in 2013, Marseille’s Old Port area has spectacular new buildings housing museums and cultural centres. Visitors also head for the Panier to visit the maze of historic streets in the vieille ville, where old-time residents now live and work alongside the city’s new boutique owners and designers.

Yet this is not the first time there has been regeneration in France’s oldest city. In the 1850s, Marseille was booming, and another grand architectural scheme, spearheaded by Prince Louis-Napoleon Bonaparte, resulted in the design of the Nouvelle Major, a brand new cathedral for Marseille, which was completed in the 1890s. The church looks ancient because it is built in the Roman-Byzantine style – a dramatic confection of towers, domes and eye-catching striped stonework reminiscent of Italian cathedrals.

There’s great shopping to be had on La Canebière, wonderful markets at Noailles, and along the coastline the crystal turquoise waters and towering cliffs of the Massif des Calanques. For more information, visit www.marseille-tourisme.com 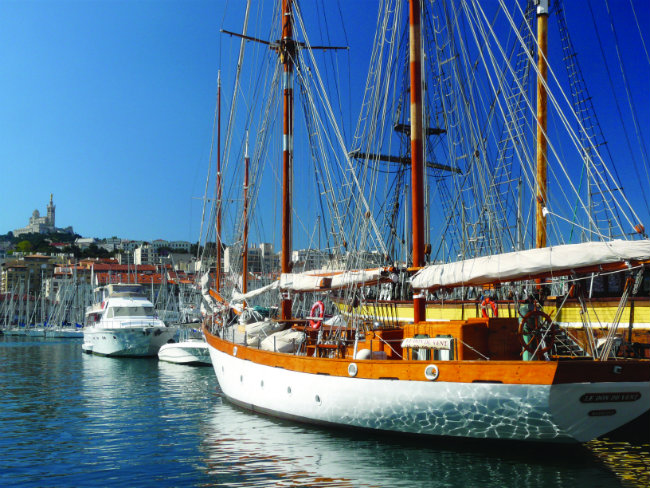 Notre-Dame de la Garde: Views across the Bay of Marseille from this basilica whose gilded statue of the Virgin Mary protects sailors. Visit www.notredamedelagarde.com

Open Tour Bus: Marseille is not only France’s oldest city, it is also one of its largest! The hop-on hop-off open tour will help you see the sights – and spin along the Corniche. Visit www.marseille.opentour.com

Eating Out: Much to choose from, but do try Gérald Passédat’s Le Mole Passedat. Visit www.passedat.fr 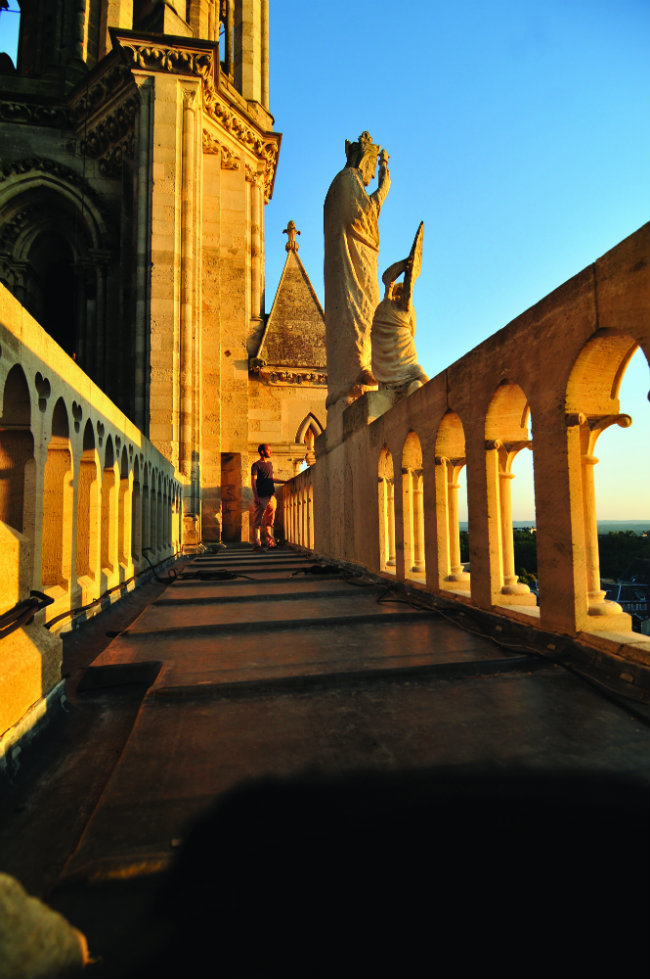 Laon: City of Art and History

The old city of Laon looks down across the Plains of Picardy. Due to its position, since Roman times it has been used as a fortified defensive viewpoint and has therefore borne the scars of many turbulent passages of military history. Fortunately, many parts of the medieval city are very well preserved and are popular visitor attractions today, such as the 13th-century Episcopal Palace and the Gothic-style Hôtel Dieu. Large parts of the ramparts are intact, with impressive gateways at the Porte des Chenizelles, Porte des Soissons and the Porte d’Ardon.

The city is classified as a City of Art and History due to its many interesting examples of medieval architecture, but the jewel in its crown is the 12th-century Cathedral, one of the very finest examples of the Gothic style, with limestone façades and stained-glass rose windows. The two towers are ornately decorated with stone carvings.

Laon also makes a good base for touring the WWI remembrance sites of Picardy such as the Chemin des Dames – April 2017 marks 100 years since the Nivelle offensive. For more information, visit www.tourisme-paysdelaon.com 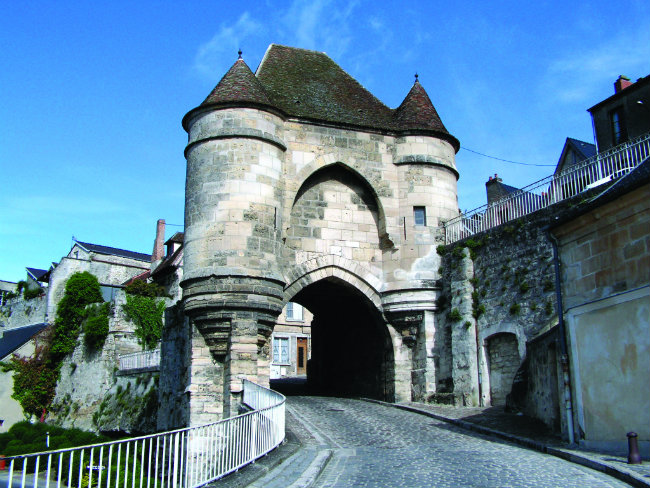 City Pass: The Laon City Pass (€10) takes you up the Cathedral tower, into the underground passageways, buys a restaurant snack and gains you entry to museums.

Underground Laon: Visit the passageways carved out of the limestone rock which formed prisons in the Middle Ages. Visit www.tourisme-paysdelaon.com

Previous Article Portrait of a Lady: Eleanor of Aquitaine
Next Article Caravane Publicitaire: The Other Tour de France