Portrait of a Lady: Eleanor of Aquitaine 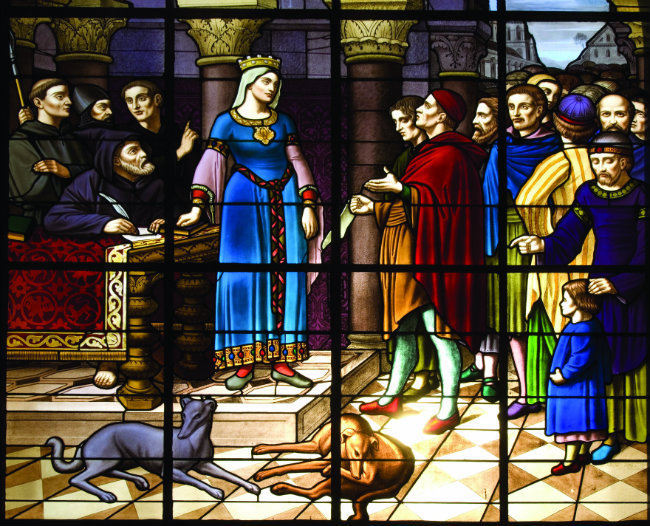 She inherited a vast chunk of France, embarked on a Crusade, married an English king and bore no fewer than ten children. Alison Hughes reveals the celebrated queen consort and her links to the town of Poitiers.

Eleanor of Aquitaine is one of the most intriguing and beguiling women that history has yielded. Her pedigree as a ‘lady’ is indisputable – at the age of 15, when she inherited the extensive Duchy of Aquitaine, she became the most eligible bride in the western world. Within three months of her father’s death she became Queen Consort of France and would later marry Henry II of England. Wife to two Kings and mother to two more (Richard the Lionheart and John Lackland) she has often been described as ‘the power behind the throne’, but in reality she had power in her own right through her inheritance.

In Eleanor’s time, Aquitaine was a vast territory stretching from the Loire down to the south coast, and was the richest and largest province of France; by comparison the ‘domaine royal’ consisted only of the area around Paris, Bourges and Sens. When Eleanor’s father bequeathed his lands, a clause stated that they would not become the property of France until Eleanor’s son became king. Ironically, this only happened after Eleanor had married Henry II and so Aquitaine came under the jurisdiction of England rather than France. These bare historical facts are the background to Eleanor’s early days but it is her personality and character that helped create the quite extraordinary life that she lived. 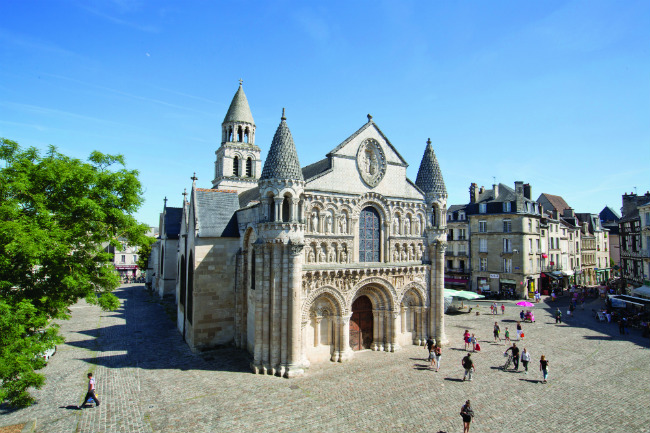 There are no precise records of the date or place of her birth, but we do know that she died at the great age of 82 in 1204, outliving both husbands and eight of her ten children. Born into a glittering court renowned across Europe – her grandfather Guillaume IX Duke of Aquitaine was dubbed ‘The Troubadour’ and her father was a lover of the arts – Eleanor was brought up surrounded by music and literature, enjoying chess and backgammon and playing the harp. She was also an accomplished rider who loved hunting and hawking.

In stark contrast to Louis, her first husband (who was originally destined for the church), she was high-spirited, extrovert and from the exuberant south; he was serious and from the more austere north. It’s no surprise then that the marriage was not a great success on many levels. Early on, Louis was enchanted with his new bride and indulged her desire to liven up his court with new fashions and furnishings, but after a decade in which only two daughters had been produced, both were looking for a reason to separate. The failure to  produce a son seemed the perfect excuse for an annulment on the grounds of consanguinity. The fact that Eleanor married Henry Plantagenet, to whom she was even more closely related, just eight weeks after the annulment, has given rise to many a rumour. What we do know is that Eleanor and Henry’s union did not lack passion – their life together was to be turbulent and eventful. 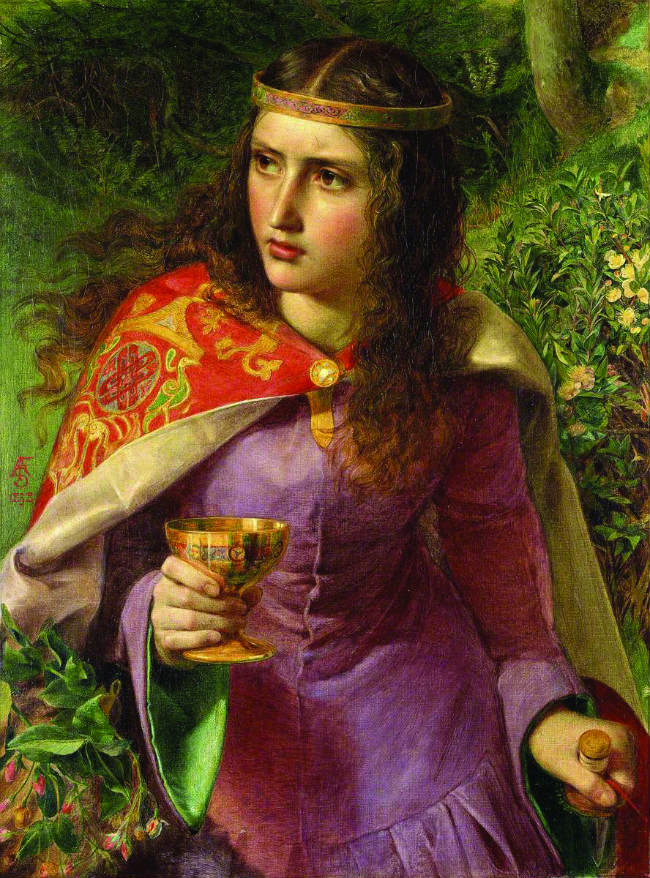 As Louis’s Queen, Eleanor had already had a taste for adventure when she took part in the Second Crusade to the Holy Land, at the head of her own soldiers from Aquitaine (which provides some insight into her character and the loyalty of her people). During this crusade Eleanor sojourned with her young uncle, Raymond of Antioch, with whom she had spent much of her early life in Poitiers. An illicit affair was rumoured which did nothing to improve the state of the marriage.

The facts of Eleanor’s life are as compelling as the stories that swirl around her. After the annulment, on her way home to Poitiers, she narrowly avoided being abducted by two other prospective suitors – Theobald V, Count of Blois, and Geoffrey, Count of Nantes – who intended to force a marriage and claim her lands. She sent word straight away for Henry to come and they were married in May 1152. Two years later Henry was proclaimed King of England and Eleanor was a Queen consort once again, but now of a much larger kingdom.

The first years of their marriage were spent in Poitiers and it was here that their first son, William, was born in 1153. This period was probably the beginnings of the renowned ‘Court of Love’ where romantic disputes were settled and the ideals of chivalry were upheld. 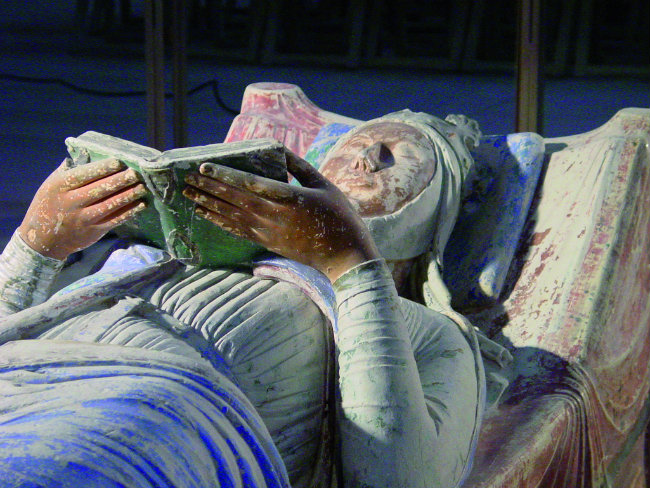 The next 15 years of Eleanor’s life were split between England, Normandy and her beloved Aquitaine. During this time she produced another seven children, acted as regent when Henry was away from England and played an active part in political negotiations. But by the early 1170s, cracks had begun to appear in the marriage – Henry had always had a roving eye, but now he was hopelessly in love with the ‘fair Rosamund’. Eleanor, distraught at the affair and annoyed at Henry’s reluctance to delegate lands or power to his sons, encouraged Henry the younger, Richard and Geoffrey to rebel against their father. The revolt failed and resulted in Eleanor being imprisoned in England until Henry’s death in 1189. 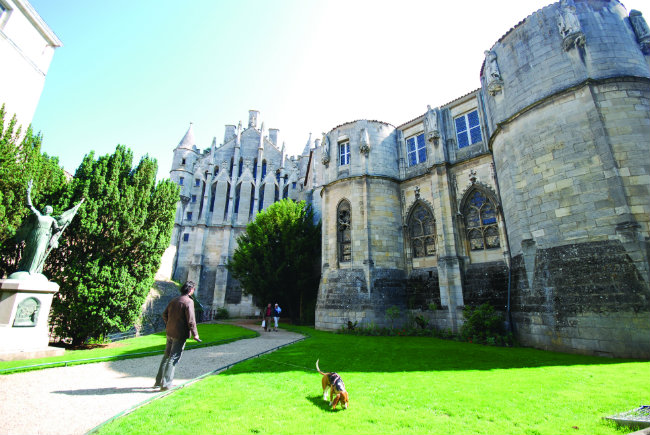 On her release, Eleanor reprised her political activities, personally taking Princess Berengaria (Richard’s betrothed) to her favourite son, who was en route to the Holy Land, and later negotiating the ransom for his release when he was captured by Duke Leopold in Austria. Even after Richard’s death, at the age of 78, she went on a mission to select one of the Spanish princesses to be the bride of the future Louis VIII. This might have been an adventure too many for Eleanor, with an ambush on one leg of the journey and the assassination of her bodyguard on the way home, but she did have one more foray into the world in defence of John’s inheritance before becoming a full member of the community at Fontevraud. She had made her base here a few years earlier, but now she took the veil and lived out her few remaining years in peace and tranquillity.

She lies peacefully next to Henry, with her favourite son Richard close by, her effigy adorned with jewellery and portrayed holding an open book. The woman who was described as ‘more than beautiful’ and ‘one meet to crown the state of any king’ was even more than this in life – fearless, passionate and clever, her legacy lives on in legend and fact and her complex character still intrigues us today. 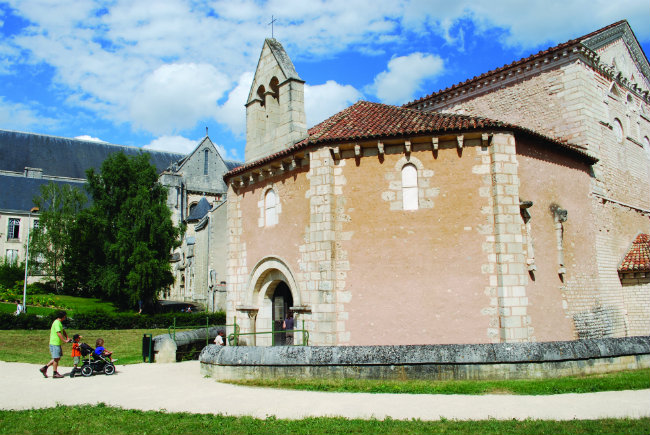 Baptistère St Jean in Poitiers, one of the oldest Christian buildings in Europe. Photo: Poitiers ©ATV

IN THE FOOTSTEPS OF ELEANOR: POITIERS

Throughout Eleanor’s eventful and well-travelled life, Poitiers was the place that she returned to when she could and which she called home. Walking around the old town the visitor can still see those monuments that Eleanor herself would have known and, in some instances, was instrumental in creating. The Saint-John baptistery is one of the earliest surviving Christian buildings (4th century) and just a stone’s throw away is the St-Pierre Cathedral, begun during Eleanor and Henry’s time in 1160. As benefactors, they are depicted at the bottom of one of the stained-glass windows with their four sons in the background.

Running alongside the cathedral is La Grand’rue – aptly named as it is one of the longest streets in Poitiers – and La Rue de la Cathédrale, commercial streets both in Eleanor’s time and today. Traditional crafts are well represented here. 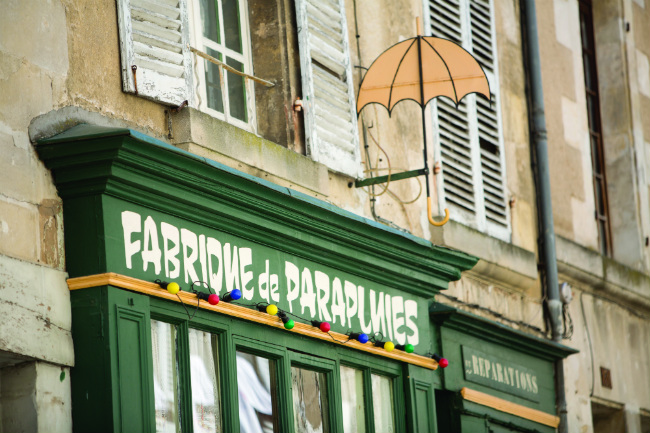 Arriving in the main square you’re at the heart of Eleanor’s world – here is the Palais des Ducs, where Eleanor spent her early days and where suitors awaited their verdicts in the ‘Court of Love’ in the atmospheric salle des pas perdus – now an anteroom for a different kind of verdict in the Palais de Justice.

Opposite stands the other medieval symbol of power, the Église Notre-Dame-la-Grande with its magnificent façade, which Eleanor would also have known. Every night during the summer you can experience the ‘Polychromies’, a sound and light show which faithfully recreates the colours of the medieval age.

The love affair between Eleanor and Poitiers was both two-way and lasting. A stained-glass window in the town hall shows Eleanor dictating the terms of a town charter which empowered Poitiers to elect its own magistrates, to have a mayor and to determine local taxes. 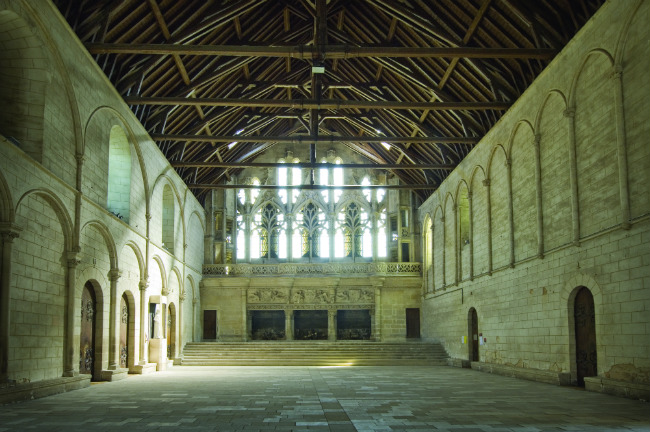 Situated 80km north of Poitiers, just outside Chinon, Fontevraud abbey was founded by Robert d’Arbrissel in 1101 and is one of the largest monastic sites in Europe. From early on it had an abbess at its head in charge of the four priories; this tradition continued until the disestablishment of the abbey during the French Revolution.

Eleanor first visited here a few months after her second marriage, in 1152, when Henri’s aunt Mathilda was abbess – it was an association that was to last to the very end of her life. The peace and stillness of the setting – still felt today – is in complete contrast to Eleanor’s eventful and tumultuous life.

In recent years the abbey buildings have been used as a cultural centre, and in 2014 a hotel/restaurant was opened in the Saint-Lazare priory, whose original purpose was, fittingly, to provide hospitality. 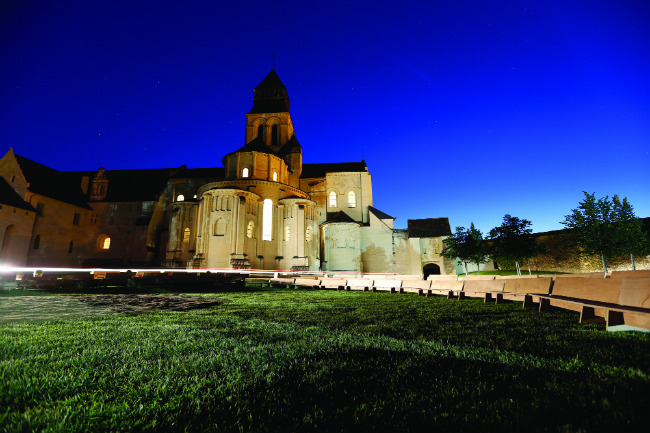 Getting Acquainted with Aquitaine

Fontevraud Abbey: If you want to experience some of Fontevraud’s peaceful atmosphere yourself, dine in the chapter house and breakfast in the cloisters, take a look at the following website: www.fontevraud.fr

Inspirational Eleanor: Not long after her death, Eleanor became an inspiration for minstrels and poets and in modern times she has inspired films, novels and documentaries, from the 1968 movie The Lion in Winter to the historical biography The Captive Queen and the more recent BBC documentary She-Wolves: England’s Early Queens. 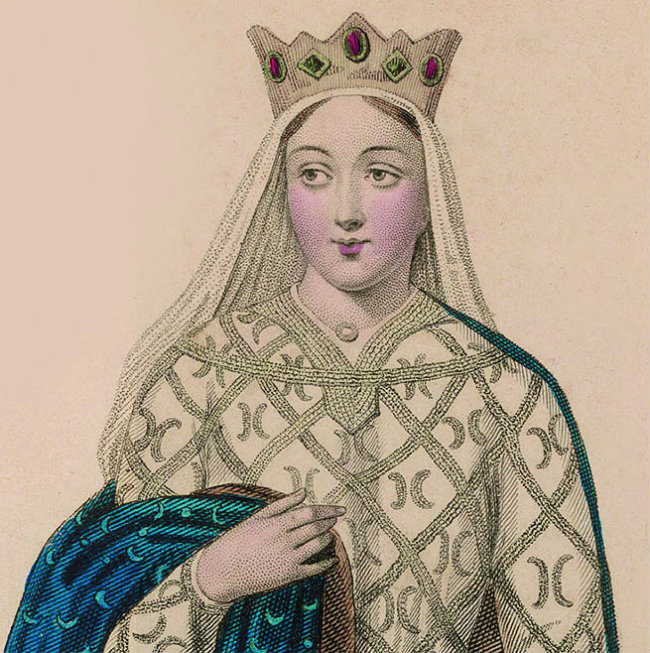