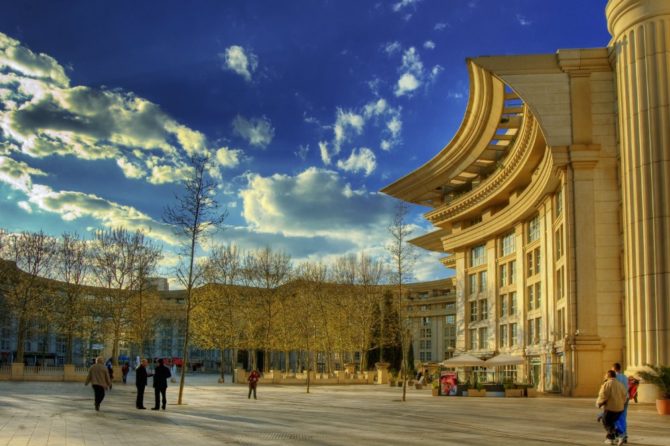 Hop on one of the shiny new trams that glide across the city, (the one I joined was strikingly decorated by fashion designer Christian Lacroix), listen to the people en route to college or work and look out of the window at the changing cityscape. The signs are there to hear and see – this is a vibrant city, fuelled by the hopes and aspirations of a largely new and youthful population. Over 43% of the populace are under 30 years old and less than 25% were brought up here. They come to this rapidly growing city from other parts of France and Northern Europe to study or to pursue careers in pharmaceuticals, law, medical research and agronomy. To underline this fact, in just 30 years Montpellier has risen up the ranks from 25th to 8th among France’s largest cities, welcoming 1,000 new inhabitants every month.

Of course they are also drawn by the appeal of a high quality lifestyle in a sunny location between the Mediterranean and the Cevennes mountains. As a visitor you can sense the attraction: the buzz of the new and the beauty of the old – a city with two faces, each equally interesting. Like some of the original residents I spoke to who dislike the changes of recent decades, the old historic heart of the city is conservative and inward-facing, nestled on a hillside with its head down in the narrow shaded streets, musing on the quieter days gone by. It’s a striking contrast to the bold and ambitious modern city; with its open plazas and boulevards facing up to the sun and its contemporary architecture like giant stepping stones on a relentless march towards the coast.

Ambition has been the wellspring that has nourished this city through the ages. In recent times, since the Sixties, it has benefited from massive spending on infrastructure. The first wave of growth was driven largely by the single-minded vision of the controversial socialist mayor, George Frêche. During a 27-year term as Mayor of Montpellier, carrying on the work of his predecessor François Delmas, he created a welcoming business environment for exciting new hi-tech and service industries. Accompanying these social changes was a grand scheme of city planning which created an entire new district, Antigone, which joins the historic centre to the Lez River. Now, the march towards the sea continues with the construction of Port Marianne, another new environment where urban planning embraces some bold new architecture for offices, shops and apartments.

It feels like it can only be a matter of decades before Montpellier’s urban expansion continues to the sea which lies just a few miles from the city – for now you can walk or cycle the remaining few kilometres between Port Marianne and Lattes or Palavas on the coast.

The modern face of Montpellier, exemplified by its contemporary architecture, is fascinating. On the edge of the old city lies Antigone, a vast 36-hectare site reclaimed in the 1980s for a mix of private and social housing. With its monumental scale neo-classical buildings designed by Richard Blofill, the Catalan architect, you admire the sheer scale and the vision and commitment required to pull this off. Today, the neo-classical style looks slightly dated and perhaps a little grandiose, but it comes to life in the warm weather when the plaza fills with people, there are open air concerts and the deep azure sky creates a vivid backdrop.

Promenade (or cycle on the new track) along the banks of the Lez river towards the next stepping stone in the Montpellier’s city plan – Port Marianne. Here, an entire new district is emerging, of smart apartments, offices, shops and restaurants surrounding a newly created harbour for small boats. There is an architectural swagger about even the most utilitarian buildings here but the highlights are both by prize-winning French architect Jean Nouvel (designer of the Musée du quai Branly in Paris).

On the banks of the Lez, the Hôtel de Ville is a bold blue-green structure, an awe-inspiring three-dimensional puzzle, with an internal arch echoing the City’s own historic Arc de Triomphe and numerous layers of reflective steel and glass. It’s about as confident a statement as a city can make about its view of itself and its aspirations for the future. Across the water in Port Marianne, also by Nouvel, is the more playful RBC Design Centre with 2000m2 of impressive showroom space which creates a veritable palace of contemporary art de vivre and interior design.

Contemporary architecture aficionados will also want to see the extraordinary Pierre Vives (Living Stones) building by Zaha Hadid, in La Paillade, one of the poorer areas of the city, which houses government departments. This is architecture not just as utility or aesthetic statement, but as social and environmental engineering.

After a lot of walking, it’s a pleasure to be back on one of the four tramlines that cross the city. Soon you leave behind the world of contemporary architecture and arrive at the focal point of the historic city: La Place de la Comédie, known locally as l’oeuf because of its original oval shape. This is one of Europe’s largest historic open spaces and you will want to sit at one of the cafés surrounding the square just to watch the world go by: an eclectic mix of shoppers, students and tourists. And as you sit and reflect you notice something else – it’s remarkably quiet. This enormous square, like much of the old city, is completely traffic-free. “Where is all the traffic?” I ask my guide. And she points downwards, “Underneath!” Just another example of visionary city planning matched with some serious amounts of public spending.

From La Place de la Comédie radiate a number of streets, many of which lead into l’Écusson (the shield) the name of the centre historique, much of which dates back to medieval times. Many visitors plunge straight into l’Écusson, but before you do, why not stop to admire the grand façades and roofscapes of the buildings that surround La Place de la Comédie. Where have you seen this quintessential style before, with these balconies and cupolas? In Haussmann’s Paris, of course. It is not widely known that Baron Haussmann also helped the Montpellier city fathers redevelop much of the city centre during the 19th century, giving rise to some grand boulevards and open spaces. So this ambitious tendency to improve the cityscape is not confined to planning visionaries of the modern age, but is in fact part of a pattern which has been repeated in waves over the centuries.

Now head up the pedestrianised Rue de la Loge, like a wide artery that runs through the old city, and take any turn off to meander through the ancient streets of the historical centre – it’s one of life’s great pleasures. Charming alleys with leaning medieval buildings provide a welcome shade from the warmth of the sun and around every corner seems to be another quaint square with a fountain, an olive tree and a few cafés and restaurants. Place Chabaneau is one to head for, but this ancient district is small enough not to get lost, so why not just wander and be surprised by the high quality artisan shops, bookshops, patisseries and bistros serving specialities of Southern France, such as bouillabaisse, daube de boeuf à la provençale, soupe au pistou or Camargue lamb?

Rue de l’Argenterie and rue de l’Ancien Courrier are the streets to head for if you like fashion shopping, although there are cute boutiques on many a corner. Although you are in the rambling and ancient heart of a 1,000-year-old city, there’s an air of sophistication here. The buildings are immaculately preserved, there are expensive paving stones underfoot and modern sculptures carefully placed in the little squares. This is a city that is doing rather well, and proud of it.

The history of Montpellier can also be traced through examples of its more historic architecture. The medieval mikve is a ceremonial Jewish bath dating from the 13th century and is one reminder of the importance of the Jewish community, which played a leading role in the development and influence of Montpellier. The imposing Cathédrale Saint-Pierre originally dates back to the 15th century and is also the site of the historic Faculty of Medicine. On a less grand scale are the many private 17th- and 18th-century mansions, some of which can be visited with a guide from the tourist office. Also with a guide you can ascend (steep and narrow) stone steps to the top of the Arc de Triomphe, a smaller scale copy of the Parisian arch, built here in honour of Louis XIV. If you do make the climb to the top you are rewarded with a bird’s-eye view of Montpellier, the coast and mountains.

Importantly, the cultural ambitions of Montpellier can now be said to rival its architectural heritage. There’s a busy programme of festivals every year including an internationally renowned Dance Festival, a Gay Pride festival, Europe’s largest extreme sports festival and this year, 2013, the Tour de France has a stage finish in the city. Every Friday during summer Les Estivales de Montpellier is a popular night-time market with a mix of stall-holders selling artisanale goods and local produce.

A cultural must-see is the Musée Fabre, one of France’s largest art galleries outside Paris, which was re-opened in 2007 following a 61 million euro refurbishment. It houses over 800 works of art and sculpture covering the Flemish, Dutch, Italian, Spanish and French collections and including painters of the great 16th- to 18th-century European schools (Zurbaran, Reynolds, Tenier, Greuze, Ingres, Delacroix, to name but a few) – together with ceramics and sculptures. From 13 July to 27 October 2013 the Musée will also be hosting an exhibition of paintings by neo-impressionist painter Signac.

Finally, as you emerge from the Musée Fabre, a little foot-weary and perhaps with a temporary case of culture and architecture overload, be sure to make time to have an apéro or lunch at the museum’s Brasserie Insensé. A chance to relax and digest not only the food but your impressions of Montpellier, the city of contrasts.

Baudon Mauny: Boutique Hotel in the old quarter. Rooms from €180 (approx) per night.

WHAT TO SEE AND DO