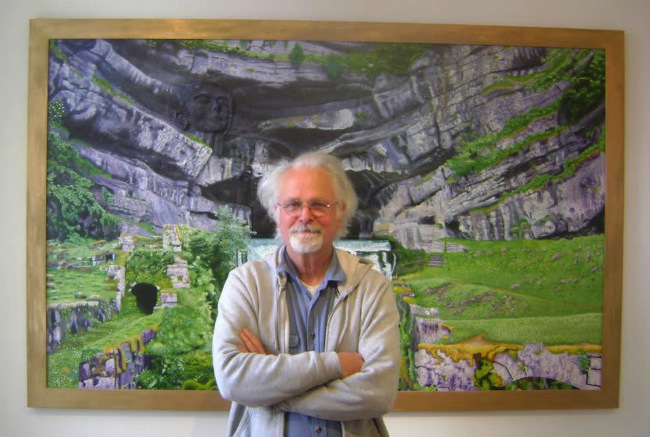 Andy Feehan is an American artist who was born and raised in Houston, Texas. He graduated from the University of St. Thomas (Houston) and earned an MFA from the University of North Texas (Denton). He has exhibited his work in Houston, Chicago, Dallas, and New York, and was featured in the 2001 New Orleans Triennial at the New Orleans Museum of Art. In 2005 he and wife, along with their four children, then ranging in age from three to ten, moved to Mussy-sur-Seine (l’Aube), a village in the Champagne region that is very close to the border of Burgundy. Last year he began creating a new studio in the old schoolhouse of Mussy, on the village square. He recently took the time to answer Janet Hulstrand’s questions about this project, and about his life in France.

How long have you been living in France, and what brought you here?

We arrived in October of 2005, first staying with friends in Pau, down in the Basque country. We were still looking for a place to live when we got to France, and our friends very generously let us stay with them for several weeks. There were six of us, and we were all in a two-bedroom apartment. Our friends were so very patient, but I know they were glad to see us go!

Why did you decide to live in Mussy sur Seine? And what has it been like for you and your family there, as transplanted Americans?

Mussy is a short trip by car and then another hop by train to Paris. It’s sort of like living in Connecticut and being able to get to New York. We found our house on the Internet, listed with an agent who operates out of a village close by. The house was big enough for all six of us, and the price was right. We had already looked at several other places, having driven across France in our search. Some houses were somewhat misleadingly described, either located next to something awful or just a wreck. We expected to have to do some work ourselves after we found a house, but a few places were in need of major reworking. Even though our house in Mussy was basically in good shape, we’ve been working on it off and on for eleven years, and now we are about to have a contractor remodel most of the ground floor. 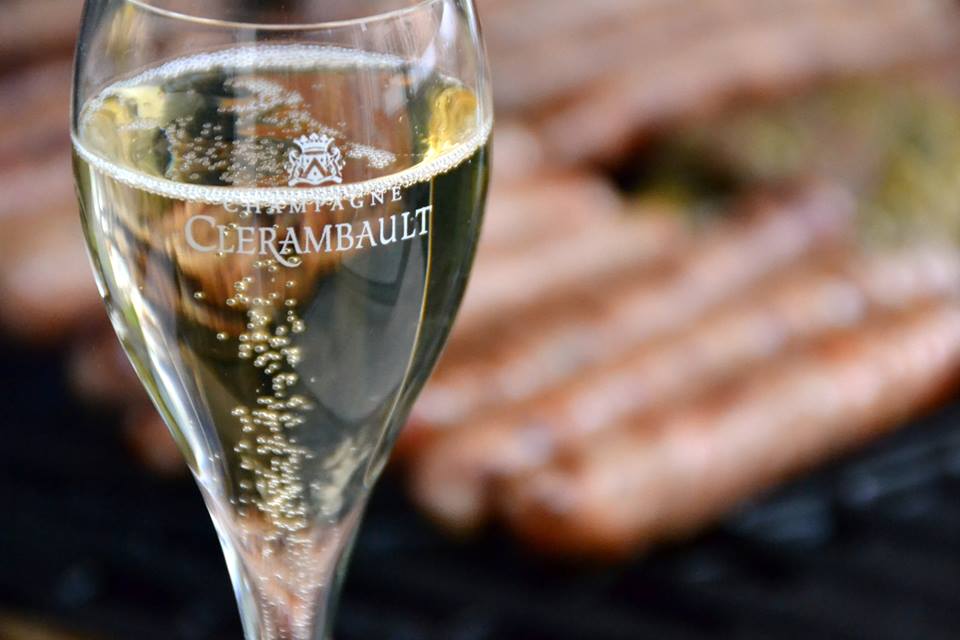 I think my wife would agree if I said we love the landscape and the geography. She loves the south, and we go there sometimes in the summer, down around Arles and Saint-Rémy de Provence. I like so much of this country, including this place, which is really historically part of Burgundy rather than Champagne-Ardenne. Some small parts of the northern  Côte-d’Or asked to join the Champagne region so they could call their sparkling wines champagne. As you know, the name “champagne” is an appellation d’origine controlée, and can only be used by vintners in the region of Champagne. Mussy is nestled in rolling hills and feels more like Burgundy, but it’s now politically part of Champagne Ardenne. Mussy is full of history, some of it medieval. It is crumbling a little bit too, suffering somewhat from a lack of commercial energy. Houston was big, noisy, and very spread out. Mussy, of course, is quiet, and everything here is an easy walk. The kids all went to the village school, a hundred meters away, down the street. Mussy is a safe place too, unlike Houston, with its traffic and its gunfire.

The most challenging thing in our transition to Mussy was probably the language at first. Only two other people in Mussy speak English, and the dialect of French spoken here is sometimes hard to understand. The most rewarding thing about our experience has been the fact that we are thriving instead of struggling. Our oldest son is enrolled in l’Ecole Centrale Paris, a very good engineering school, and our second son will enter a preparatory school, Kleber, in Strasbourg, in September. The kids all speak beautiful French and can still easily switch back to English. I speak French too, but unlike the kids I will always have an accent. 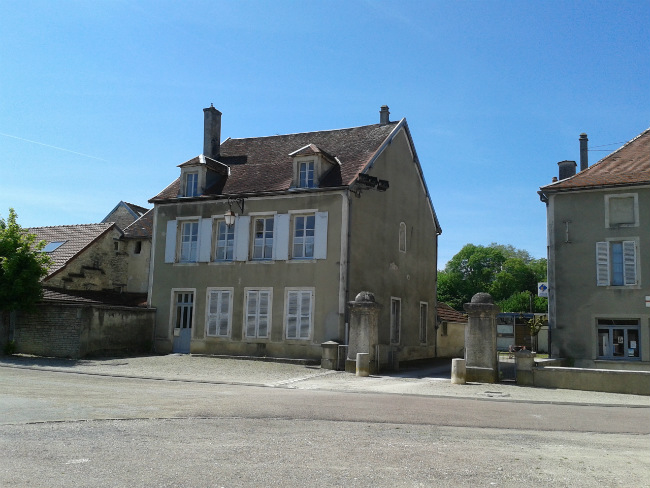 The artist’s studio in the old schoolhouse in Mussy. Photo: Andy Feehan

Can you tell me about the project you are involved in now, creating your new studio in the old schoolhouse in Mussy? How old is the school, and what have been some of the most interesting discoveries you’ve made in this process?

Last September a member of the village council who is also a friend showed me the upper floors of the schoolhouse. Traditionally in France the village schools also housed either the schoolmaster or the principal, if the school was larger. This building, which dates from the early sixteenth century, was originally part of the monastic community. The church here, Saint-Pierre-Es-Liens, was built over the twelfth and thirteenth centuries. After the French Revolution the church lost the property and some time in the mid-nineteenth century the building became the village primary school. The ground floor, which is still a classroom, has been utilized by the village for a number of years as a sort of community activity center. People meet there regularly, and sometimes kids come and do crafts and other things. The upper floors had been the residence of the schoolmaster and had been closed up since the early 1980s. Mussy built a larger multi-classroom school during that time, and so the old schoolhouse was no longer needed. When my friend showed me the schoolmaster’s apartment last September it was very dusty and had suffered from water damage due to a leaky roof. The place was in sad shape, but I could easily see how beautiful it could be after it was cleaned up. It faces south and has wonderful sunlight all year round. It’s right on the church square and is not obstructed by any other building. Even in winter it has sunshine. It is ideally situated. I spent a few months restoring the walls and the floors. I stripped the whole place down to the plaster and refinished everything. I have a big room in which to paint, a room for a wood shop, an office, a kitchen, and a bathroom. I love it! 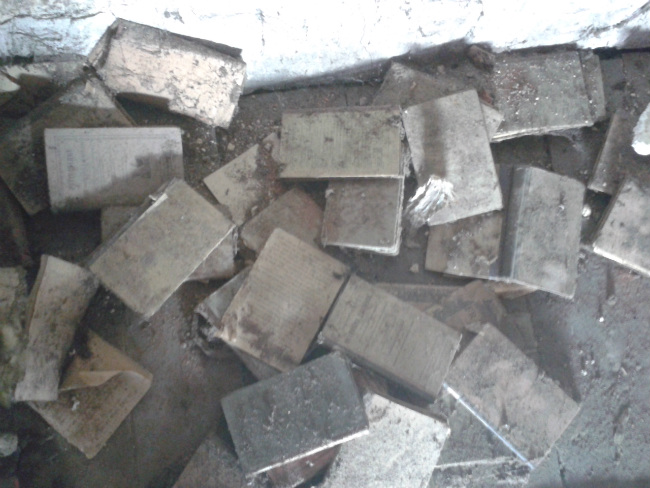 After I moved stuff from my previous studio in our house I realized I would need more storage space, so in spite of my original intention not to restore the attic as well, I decided to do so, as daunting as the task would be. It was pretty filthy! Six truckloads of trash went to the dump, and an entire trash can full of dust got swept out too. To my delight, I found hidden in a dark recess of the attic, a small collection of books, most of which dated from the mid-to late nineteenth century. The schoolmaster had saved textbooks and also a few books for adults over the decades, and when the last teacher moved out he left all the books. The years went by, and the books somehow got scattered a bit. Some suffered from water and insect damage, but most of them were quite salvageable. I spent an afternoon sorting them, cleaning them, and housing them in a cupboard that was a built-in feature of the attic. I discovered books on French grammar, French history and geography, and good citizenship (which included military service to the Empire, which at the time was vast). 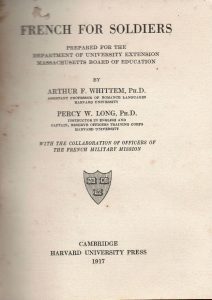 The title page of “French for Soldiers”, published by Harvard University Press

I found a few military books, including a manual on infantry tactics published in 1870, a few months prior to the Franco-Prussian War. I also found, to my amazement, a copy of French for Soldiers, published by Harvard University Press in 1917. It includes slang and military language to enable better communication between the American Doughboys and les poilus. The book was even autographed: it was the property of Corporal J S Williamson, Company A, 306th Division, 75th Battalion, and dated March 1,1918. I found out that the 306th was established in New York in 1917 and disbanded in 1919. I don’t know what became of Corporal Williamson, but I hope he made it home. I understand there was a U.S. Army barracks here in Mussy, which was always behind the lines, although the front was close by.

What is it like being an artist in France, as opposed to in the U.S.? Is it possible to make any meaningful generalizations about that?

Well, to be honest, it’s been a bit of a tradeoff. In Houston I had gallery representation and usually managed to sell my work at prices that to me seemed reasonable. Here, especially out in the country, people do not expect to pay much for art. I have sold work, of course, but I’ve had to bite the bullet on the prices of my work. But I have been very moved by the landscape and the mythology of this part of France. As we all know, humans have been around here for eons. The Gallic mythology of the Seine itself is fascinating, and I have referred to it in my work. What I hope to do is escape the trap that is called “American artist comes to France and paints landscapes”. Ho-hum. 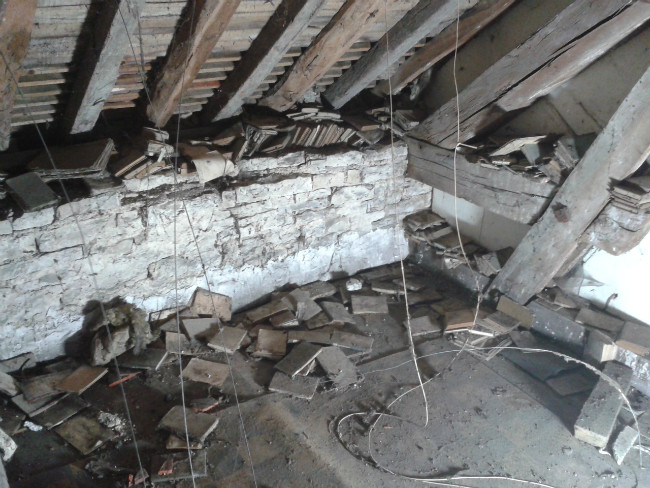 Books found under the eaves during the schoolhouse restoration. Photo: Andy Feehan 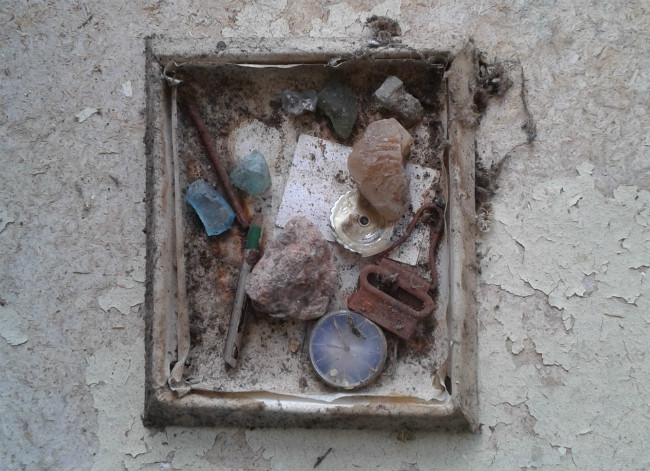 A child’s collection of treasures, discovered during the restoration. Photo: Andy Feehan

I know you’ve spent many months just getting the schoolhouse into being a functional space again. But finally you’re beginning to be able to return to your work and create new pieces. What are you working on now, and what are you looking forward to doing in the future?

I am experimenting with a casting technique, an extension of something I’ve been doing for years, but now more sophisticated and more challenging. My work has been involved with a combination of bas relief and painted surfaces. I am essentially pouring an entire composition, then mounting it and painting it. I am also creating surface textures using sand mixed into the paint. That method has a slight risk of becoming hokey, but done with skill it can be a wonderful way of rendering trompe l’oeil in imitation of decaying walls and that sort of thing.

How has living in this part of France affected your work as an artist?

I am much more interested in the local mythology, especially that of rivers, which are often thought of as female, although some rivers in France are males as well– “le Rhin”, “le Rhône”, etc. “La Seine” is most definitely feminine, and it serves as a focal point for me in my efforts to describe the earth itself as female. This is nothing new, but I hope my work addresses the idea in a way that hasn’t been done before. 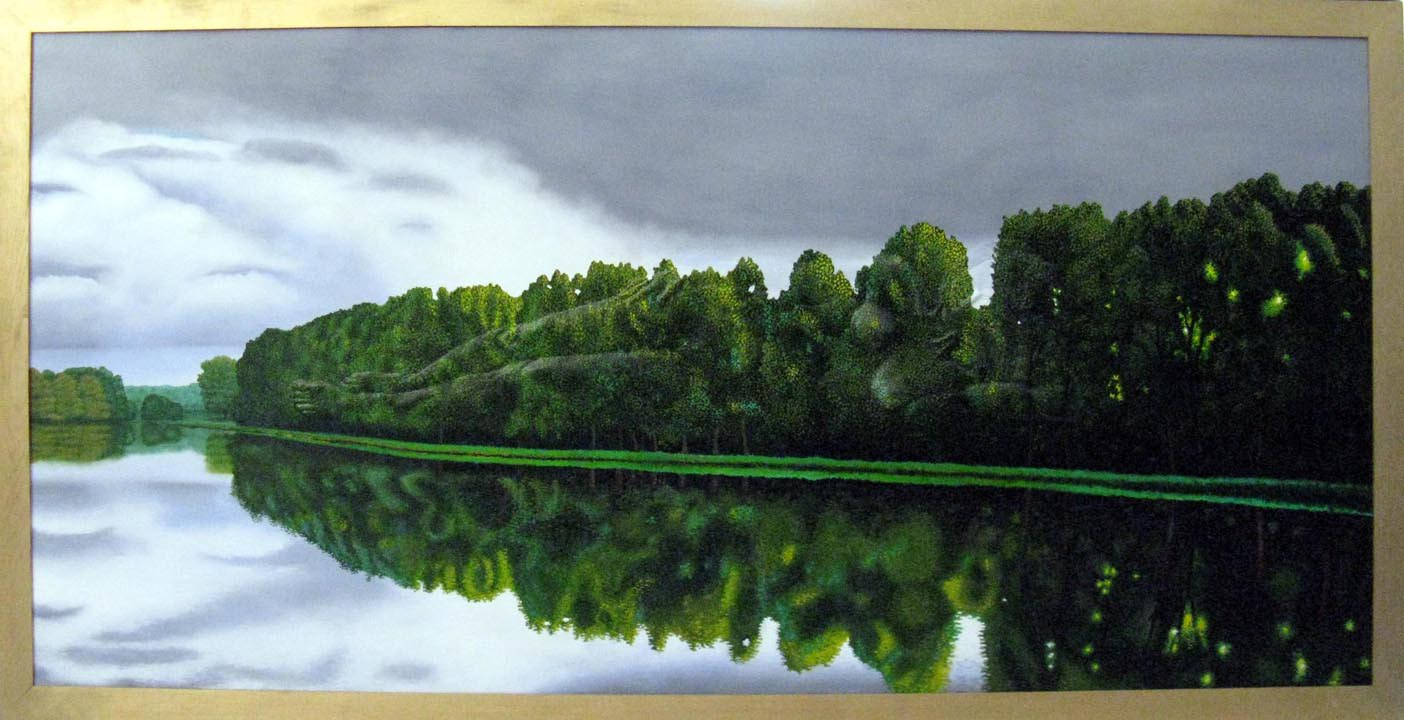 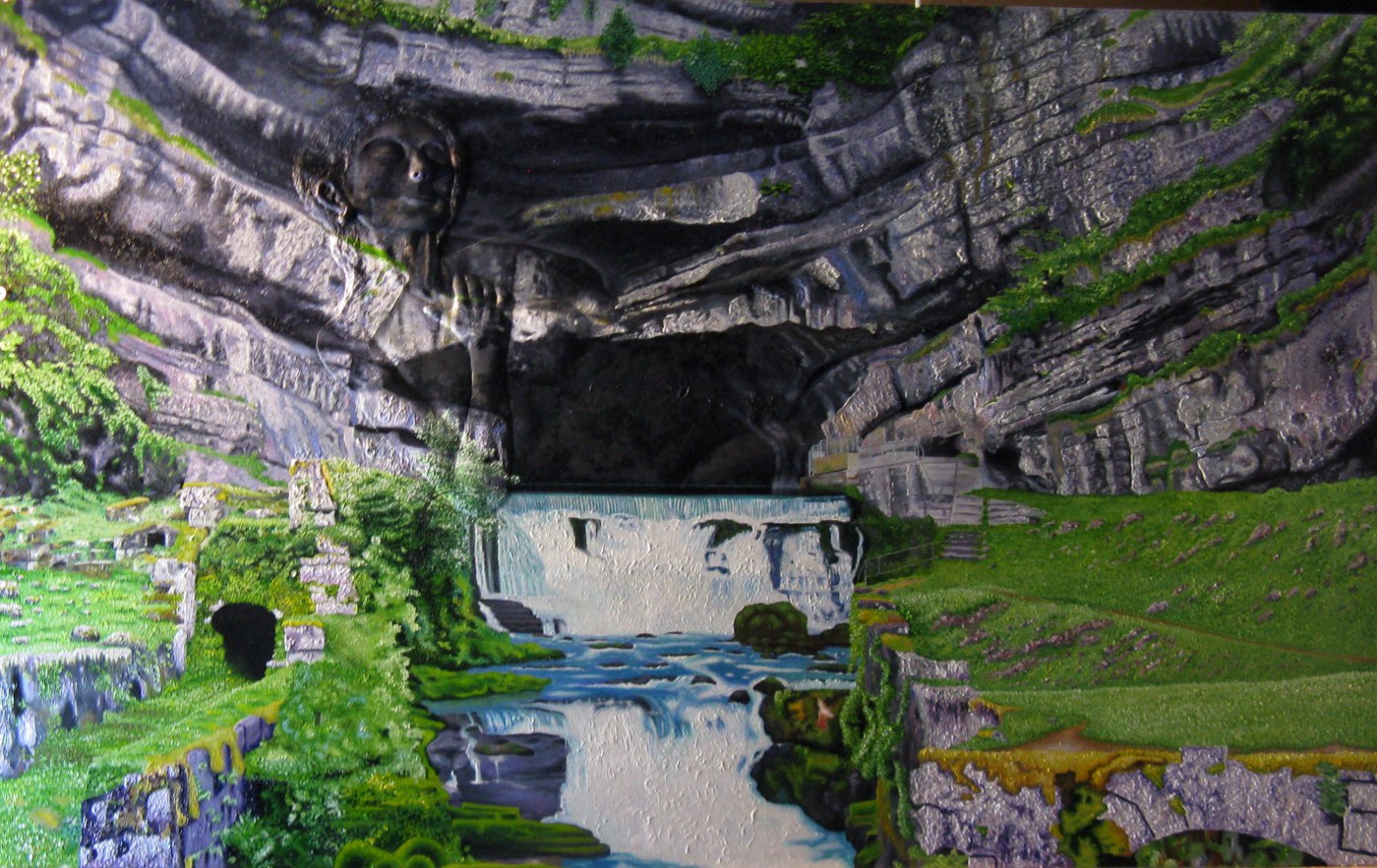 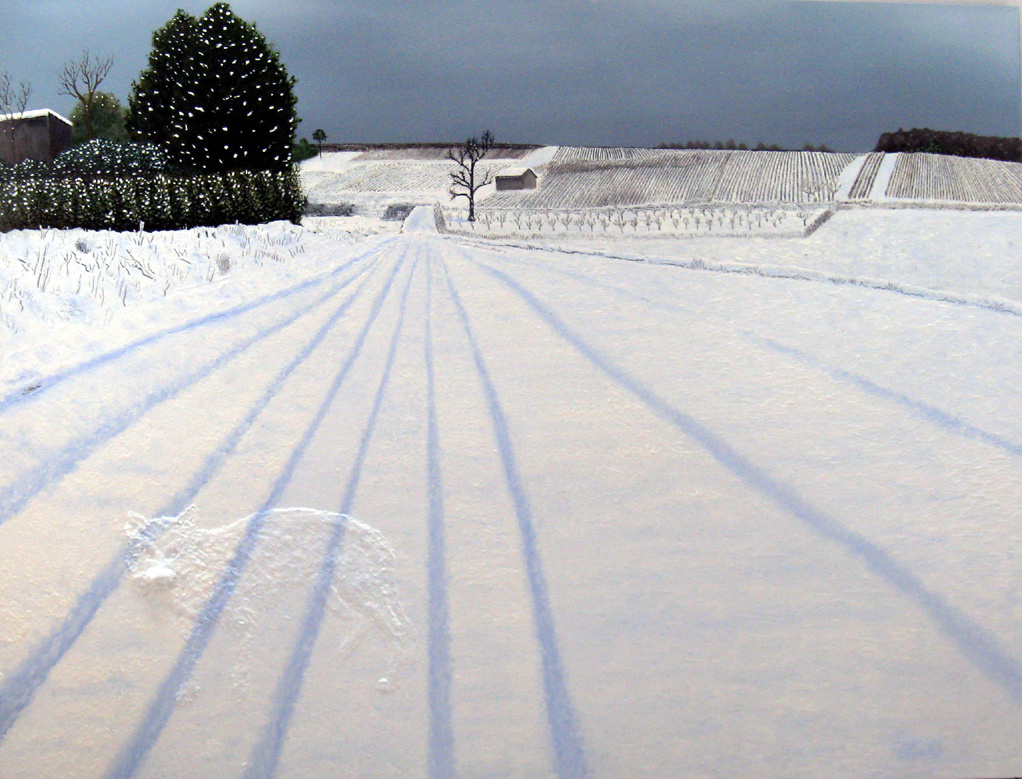