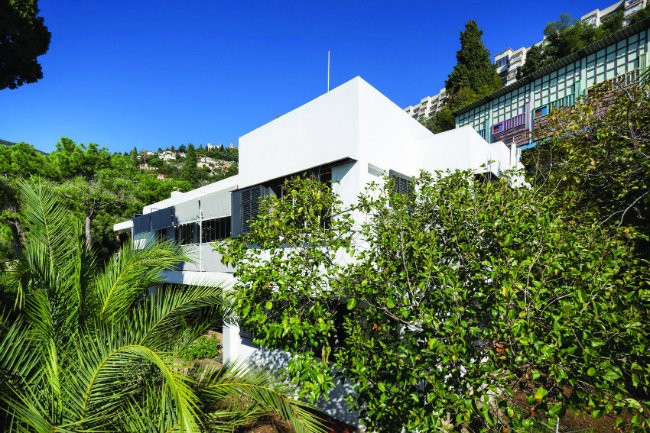 A few years ago, while swimming at Roquebrune-Cap-Martin beach, in a sedate corner of the Côte d’Azur close to the Italian border, I looked up and noticed a house perched above the sea. Even in its dilapidated state, the house stood out as being architecturally extraordinary, as a white ‘cube’ design on stilts featuring over-sized windows. This modernist maison turned out to be the holiday home of Eileen Gray, an Irish-born furniture designer and architect, and her lover and fellow architect, Jean Badovici. The three-year construction of ‘E-1027’, which is code for the lovers’ names, began in 1926 and their Riviera retreat, which resembles a boat thanks to its sail-like awnings, has lived a remarkable life of light and shadows ever since.

For many years the house languished – left at the mercy of the elements, and it was seemingly destined to a sad fate. However, the restoration of E-1027 finally began after the Conservatoire du Littoral bought the house in 1999. Although it’s still very much ‘work in progress’, E-1027 re-opened for private guided tours this year.

For 20th-century architecture obsessives, Roquebrune-Cap-Martin is now a place of pilgrimage. Modernism doesn’t usually come to mind when thinking about the Côte d’Azur, but the E-1027 house is on the same path that leads to Le Corbusier’s ‘Le Cabanon’, a nine-square-metre square hut that the Swiss-French architect built as a holiday home in 1952. Next door sits a small dwelling that was once a beach bistro and is decorated with his murals, plus a row of holiday huts he designed. E-1027 completes the modernist picture.

For better or worse, Le Corbusier is closely linked to E-1027. After Gray and Badovici separated, leaving the latter in charge of the house, Le Corbusier took it upon himself to paint the walls with vibrant, sexually-charged murals. Gray viewed this as vandalism as it obliterated much of the monochrome colourscheme (white, grey and blue) that she’d carefully chosen to complement the serenity of the house’s Mediterranean setting. During World War 2, the house was occupied by German soldiers, who used one of Le Corbusier’s murals as target practice – which doubtless would have pleased Gray. The final chapters in the history of E-1027 include a former owner who was murdered there and, latterly, the havoc wreaked by squatters.

It’s taken several years to get the house in a fit enough state to open. A visit is both a step back and forward in time as modernism is still highly relevant today. Gray considered the details to be as important as the big picture. She commissioned shutters which can be rolled back and forth, depending on the sun; cupboards that blend into walls; a cocktail bar area; a nook for stacking LPs; and easily portable furniture for use inside and outside. Gray intended the house to be a retreat and a place for fun with friends.

Gray’s architecture is to be lived in. The lightness of E-1027 contrasts with Le Corbusier’s dark, rustic cabin which, in comparison, looks less like modernism and more a perfunctory hut. For many years, Gray didn’t receive her due as the prime architect of E-1027 and was overshadowed by Le Corbusier so, if she were here today, she’d likely relish that irony.

Previous Article Le Balcon: The Restaurant at the Philharmonie de Paris
Next Article Château d’Yquem Opens to the Public for the First Time