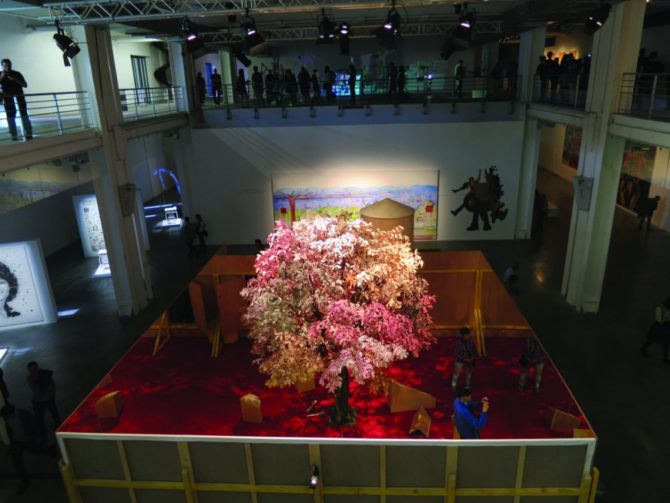 Every two years Lyon welcomes this well-established event, which is organized in three parts: an International Exhibition, Veduta (residencies and promotion), and Resonance (100 visual and performing arts projects). This edition also includes nine artists who have contributed installations specially conceived for the occasion.

On my first day I visited the Sucrière, a new arts centre in the Confluences quarter on Lyon’s former docks, which was vibrating with live music, a kayak regatta and numerous visitors. Inside the Sucrière there was even more energy in such new discoveries as God Bless Bagdad by Icelandic artist Erró and the more familiar works of Yoko Ono. The minimalist exhibit by the Palais de Tokyo next door was also worth a look.

The following day it was off to the MAC Lyon in its privileged location between the Rhine and the Tête d’Or park. It was a warren of surprises – I was mesmerized by Takao Minami’s Fat Shades HD video one moment, and riveted by the wise oracle-owl by Danish artist Anne Lislegaard the next.

There are three other sites dedicated to the Biennale plus a host of ancillary events held on weekends. Confronted with such a maelstrom of creativity, it would be a challenge for even the most hardened contemporary art apostate to remain indifferent.

Tip: If you’re travelling with children, there’s one exhibit at the MAC that is divided by a thick curtain. Youngsters should wait for their accompanying adult to cover their eyes and usher them through due to the disturbing content.

Previous Article Where to Stay in Strasbourg: Cour du Corbeau
Next Article Colours of Cézanne