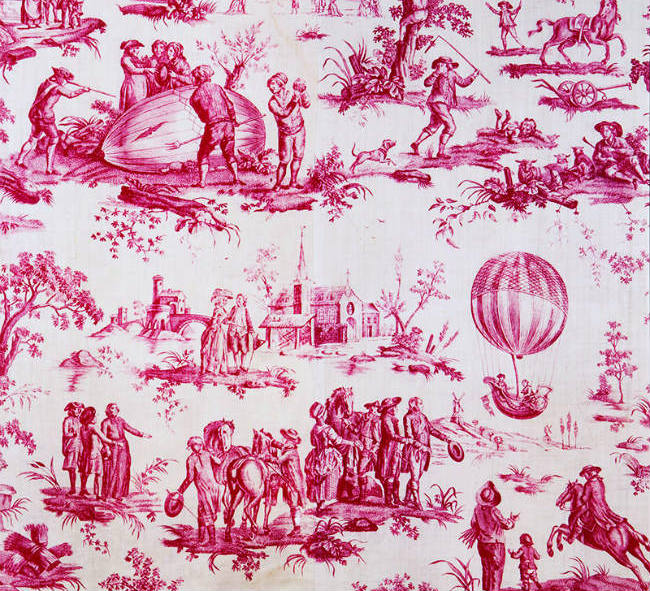 The name toile de Jouy, now commonly used generically, stems from the village of Jouy-en-Josas, just south of Versailles, where the fabric was manufactured and where the Toile de Jouy Museum now perpetuates the story. The fabric has come to epitomize French savoir faire and art de vivre in matters of decoration, and is reproduced today by prestigious houses around the world.

The man behind the brand, Christophe-Philippe Oberkampf, is better known for the street and Métro station named after him in the 11th arrondissement of Paris. Born in 1738 to a German family of dyers, like most of those involved in the textile industry, Oberkampf was a Protestant. He was hired from Switzerland to Paris, in 1758, to work as colourist and engraver for the cotton manufacturer Sieur Cottin. 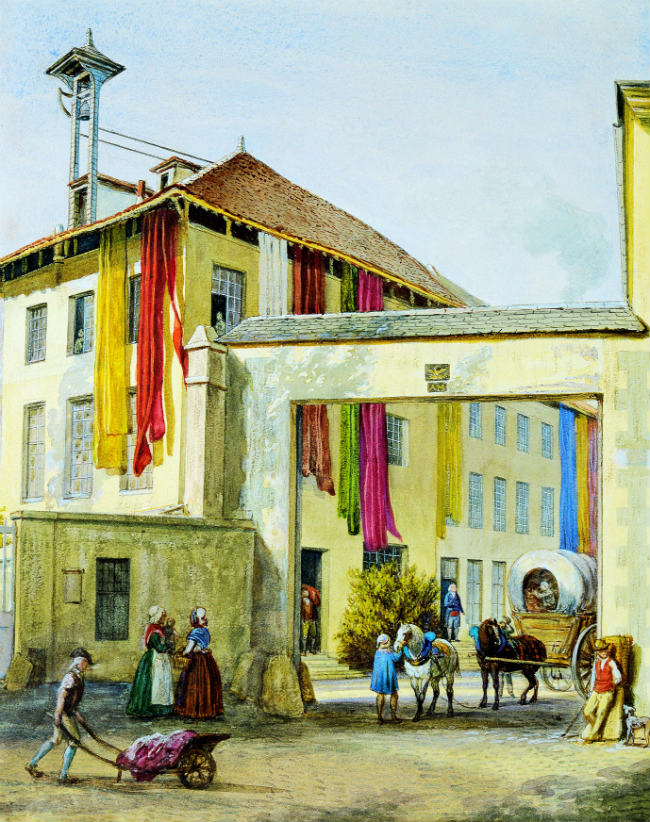 Indian cottons – indiennes as they were called in France – had invaded the European market after the opening of the East India Companies. Printed or painted with exotic polychrome floral or animal patterns, they became all the rage, the “in” thing to wear, as stated in Molière’s Le Bourgeois gentilhomme. Unlike European cloths – woollen, linen or silk – their colours were fast (bon teint) and they washed easily. Understandably, they posed a threat to the local textile industry, even more so once they started being manufactured at home, hence the ban on cottons decreed in 1686 (which was followed by a ban in England too). 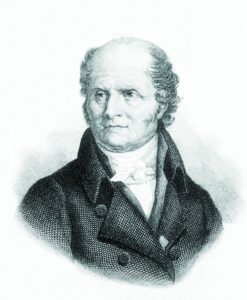 The ban, however, did not diminish the lure and was never fully enforced. The Court closed its eye to clandestine mills (such as Cottin’s) and Madame de Pompadour indulged in indiennes for both her wardrobe and furnishings. Yet, the local savoir faire was gradually lost, which is why skilled foreigners such as Oberkampf were an invaluable asset. In no time, he was grabbed by Sieur Tavanne, who promoted him to manage his mill, by the River Bièvre, which now flows underground, in the 13th arrondissement. Renowned for the quality of its water, it had already made the fortune of the Flemish dyer Jehan de Gobelin back in the 15th century. (The conversion of the Gobelins to tapestry-making dates from the 17th century.)

In 1759, Oberkampf got wind of the imminent lifting of the ban, and decided to set out on his own, with a head start over his peers. With Tavanne’s financial support, he picked Jouy-en-Josas, where the Bièvre has its source. Wood for the heating of water was in plenty, as were empty meadows where the cloths could be spread out to dry. Furthermore, Jouy was a short way from the promising clientele of Versailles, and close enough to Paris too, though far enough to retain the workforce. 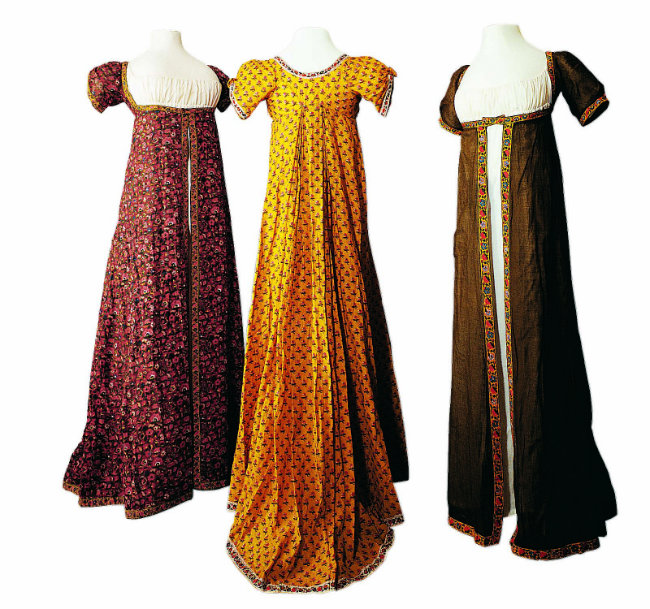 The new manufactory opened in 1760, as soon as the ban was lifted. La Maison du Pont de Pierre, now the music school, was acquired for the purpose. It was a modest house and the boiler had to be placed outside. His younger brother and helper Frédéric took lodgings in Versailles. Oberkampf, allegedly, slept on top of the printer’s table and kept his possessions underneath. On May 1, 1760, he printed the first fabric, and increased the output to 3,500 pieces by the following year!

Bearing in mind that a finished cloth measured 21 metres in length and between 80 centimetres and 1 metre in width, additional space was needed, which entailed several new constructions on 14 hectares of grounds. By the eve of the French Revolution, Oberkampf’s business was the second biggest in France in terms of capital, surpassed only by Saint Gobain. By 1805 the workforce totaled 1,322. More than 30,000 designs were created over the years, many by Jean-Baptiste Huet, some by Jean-Honoré Fragonard and François Boucher. In 1787, Oberkampf was knighted by Louis XVI. In 1806 he was decorated by Napoleon on site with the Cross of the Legion of Honour.

Keeping abreast with scientific research and innovative techniques, Oberkampf found new ways to obtain dyestuffs, most importantly green dye, which, despite being the most prevalent colour in nature, could only be obtained by overpainting blue and yellow, a laborious method carried out by pinceauteuses (hand-touchers). In 1808, he made a major breakthrough when he obtained a green dye by plunging a mixture of china blue with tin oxide into a yellow dyestuff. (Cloth plunged into a bath of indigo did emerge green, but turned blue when it came into contact with air.) 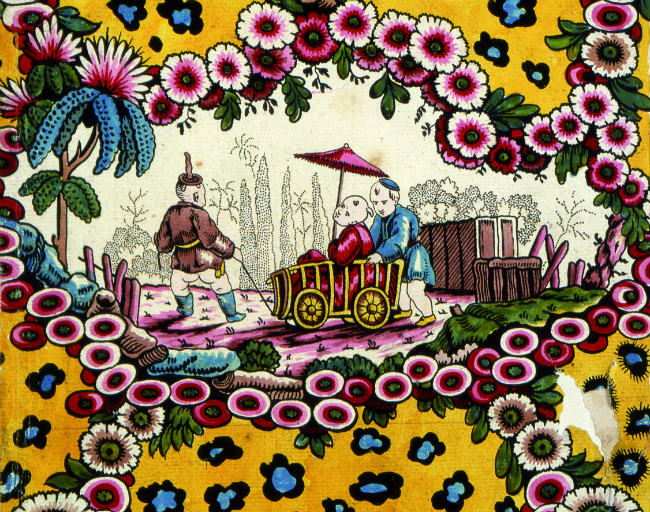 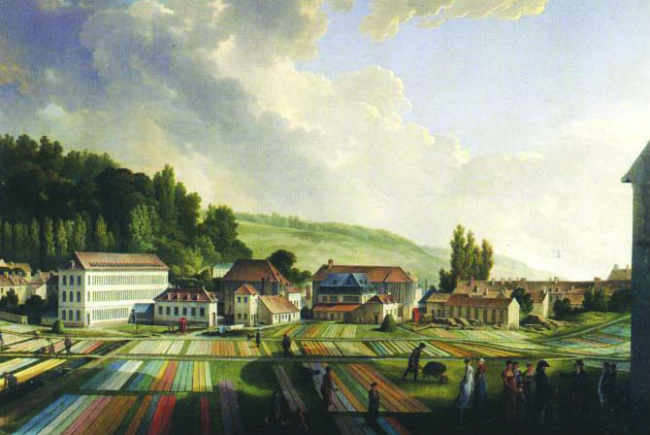 The printing process too was innovated. Whereas the traditional wood block was in use to print polychrome and small motifs, copper plates were introduced for monochromes and larger designs. The two could be combined into the same fabric, the block prints filling pleasantly the blank spaces between the larger scenes. When the copper roller was introduced in 1800, and the process was mechanised, production was increased to 5,000 metres in a single day, as against 30 metres produced by a skilled printer using a block. 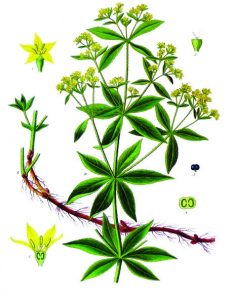 The process consisted in first applying an aluminium- or iron-based composition known as mordant to the block, plate or roller. The mordant was printed onto the fabric, which was then plunged into a bath of madder root (garance) and tinted red. When the fabric emerged from the water and dried, the colour washed away, except where the mordant had been applied.

Although today we associate la toile de Jouy with monochrome scenes, in Oberkampf’s day it was the floral motifs that predominated. They were coloured by hand, made for garments, used and reused until they were worn out. The flowers scattered against a dark background, known as bonnes herbes, were particularly popular. Then as now, society’s stars often set the fashion. The sumptuous cashmere shawls worn by Napoleon’s Josephine were reproduced on Jouy cottons with their paisley and palmettes motifs, the latter inspired by her husband’s Egyptian campaign. 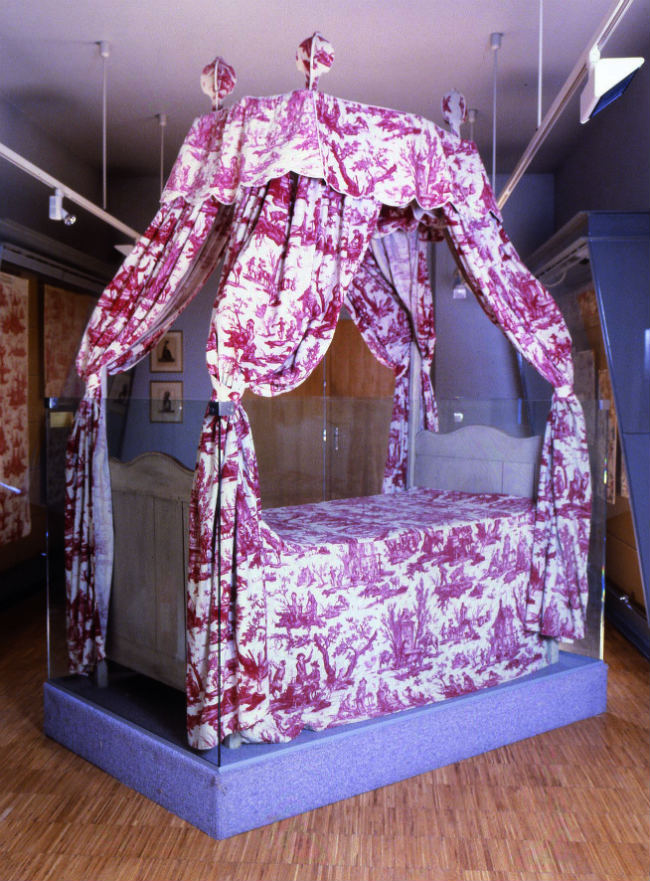 The monochrome fabrics were made for furnishing and have lasted better. The printed scenes can be read like story books, history archives, catalogues of styles… Of particular interest are the motifs that record the major milestones in Oberkampf’s eventful lifetime: the first hot-air balloons, American independence, and the French Revolution not least – the turmoil of which Oberkampf managed to sail through unscathed. Playing it cleverly, he altered his designs to suit the new ideology, removing the fleur-de-lys and the crown surmounting it and substituting the tricolour cockade with religious symbols. He was even elected the first Mayor of Jouy under the new Republic.

A special design was created to commemorate the first anniversary of Bastille Day, La Fête de la Fédération held on the Champ-de-Mars. Created by Huet, who attended the ceremony, it features the King swearing the oath on the Altar of Liberty in the presence of his family, Lafayette and members of the National Guard on horseback, and female citoyennes dancing on the ruins of the Bastille. 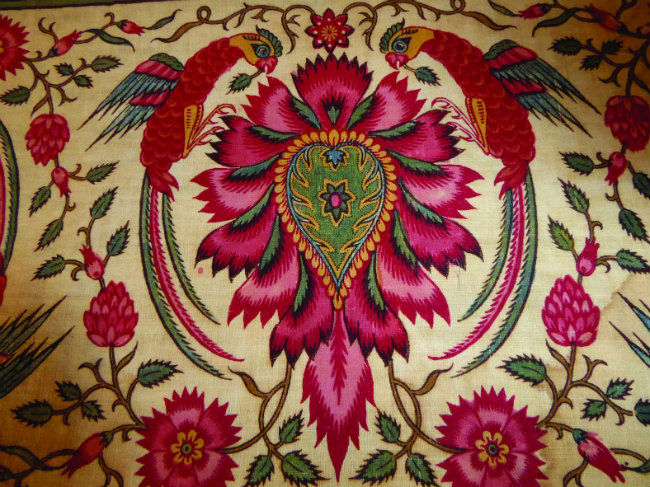 The diversity of designs and styles was prodigious. They also enlighten us to the tastes and passions of the time. The pastoral motifs were inspired by the then very popular Jean-Jacques Rousseau – a fabric with the design of his grave was created after his passing. Greek mythology, chinoiseries, the Fables of La Fontaine, the monuments of Paris, Rome and Egypt, even operas such as Figaro and Don Quichotte were celebrated on the cloths. Oberkampf himself was a music lover and invited the musicians of the Royal Chapel of Versailles to perform in his dining hall. Particularly enlightening to our subject is Huet’s Les Travaux de la manufacture which depicts all the stages involved in the manufacturing of a toile de Jouy! 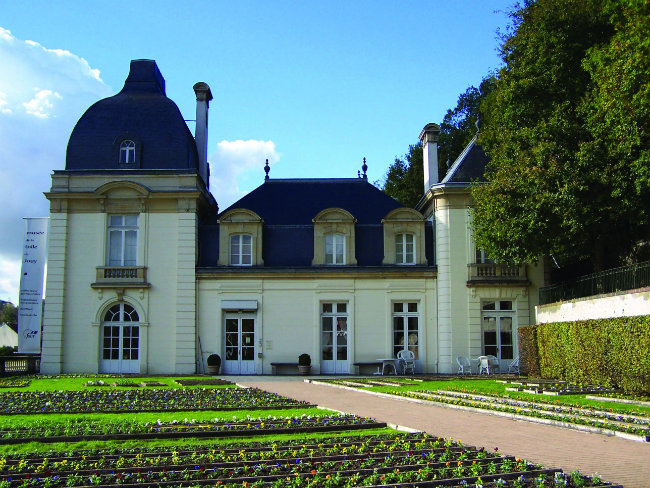 The museum today, housed in the Château Églantine in Jouy-en-Josas. Photo: Henry Salomé

Oberkampf was not the only manufacturer of indiennes, but his combination of perfectionism, work ethic and managerial skills was unsurpassed. Way ahead of his time, not unlike today’s haute couture houses he diversified his fabrics to suit different markets, catering both to Marie-Antoinette and to ordinary middle-class women, producing the finest of luxury cottons as well as affordable siamoises, which were printed on a cheaper cotton and linen mixture. 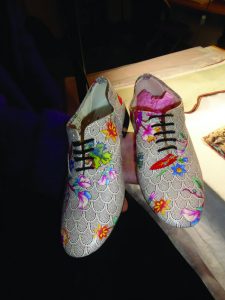 An excellent salesman, he set up an efficient mail order system, catering to clients from as far away as Constantinople, Copenhagen, Lisbon, London and Amsterdam. All the accounts were shouldered by a single brilliant woman, Marie-Catherine-Renée, the wife of his one-time business partner Sarrasin de Maraise.

Christophe-Philippe Oberkampf died in 1815, the year the Empire collapsed. His son Émile weathered the change of regime as best he could. In 1821, when Jacques-Juste Barbet took over, this was still the biggest manufactory in Europe, but the craze for indiennes had waned and decline set in. In 1843 the manufactory closed down and its buildings were torn down soon after.

Oberkampf’s family home, which survived, became the seat of the Mairie in 1899. His bust was unveiled in the courtyard the following year. Also on display is the bell he rang in person several times a day to punctuate the workday. Incidentally, there is also a Rue Barbet-de-Jouy in Paris, a side street by the Musée Rodin, opened on land he had gifted to the city. 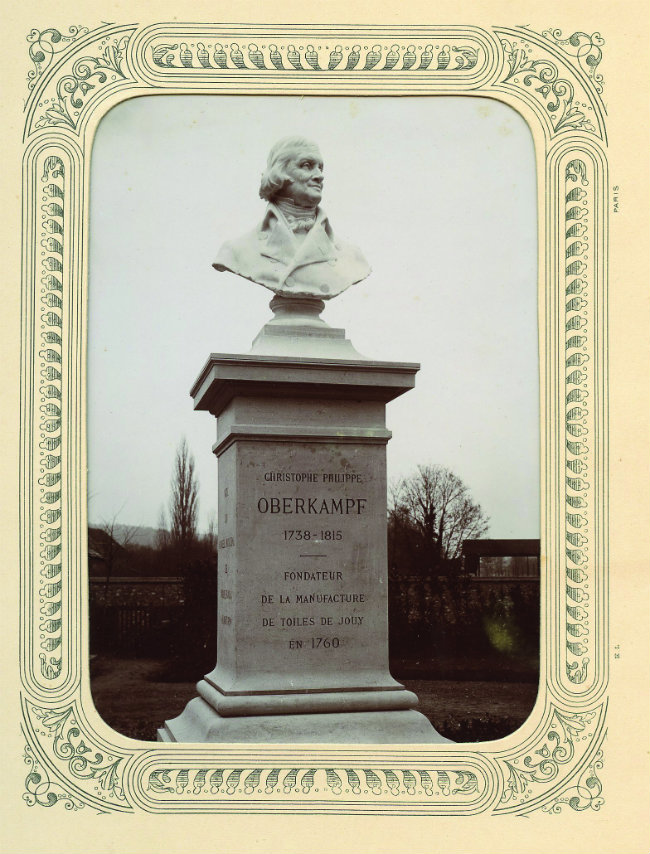 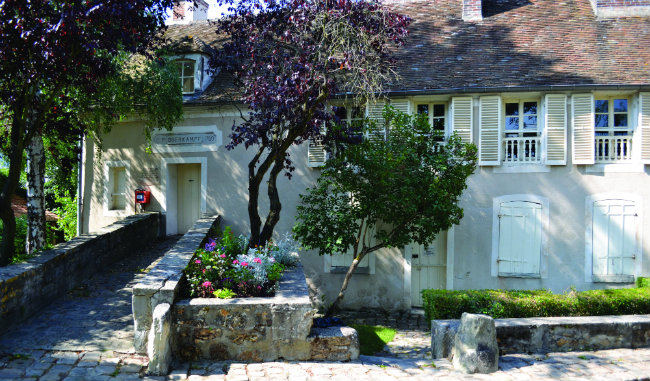 The manufactory is now a music school.