The Art of the Marvel Super Heroes in Paris 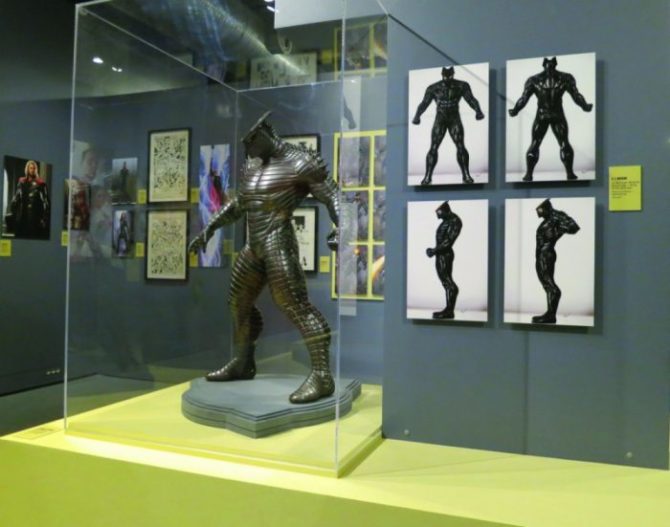 Super heroes are the closest we get to a modern-day mythology, and we owe most of them to the prolific creative brains at Marvel, and their “House of Ideas”, under the helm of Stan Lee, who was then Editor-in-Chief.

Having observed what preoccupied teenagers, Lee gave the characters a human, fallible side to go with their super powers. Because fans saw something of themselves in the likes of the Hulk, Iron Man and Captain America, it allowed their collective consciousness to attach to this pantheon and even build on it over the years.

Throughout the exhibition there are prints, priceless originals, 3D models, digital paintings, props, costumes and everything that it takes to bring the stories from the imagination on to paper, film and every aspect of the lucrative merchandising machine that goes with it. There was a predominance of little boys going “whaaaaaoouw!” when they entered the main exhibition space. Girls had a somewhat more muted reaction. For adults there’s the nostalgia of recognising the Fantastic Four, the Avengers, Spider Man and the equally fascinating arch villains.

Most of all, this exhibition showcases the shining talents of the artists who have kept these characters alive for generations – from when the first Captain America fought the Third Reich, to his stopping the world suffering nuclear meltdown. What will he save us from next?

The final exhibit is a film that chronicles the transitions from storyboard to screen and a giggle-inducing photo booth which takes your picture surrounded by super heroes. A light-hearted, fun day out.

Tip: After the exhibition head up to the rooftop cafe and bar for an on-trend drink and a view of the Seine.

Originally published in the June-July 2014 issue of France Today

Previous Article What’s On in Paris: Bill Viola at the Grand Palais
Next Article Where to See a Movie in Paris: Cinema Pathé Beaugrenelle