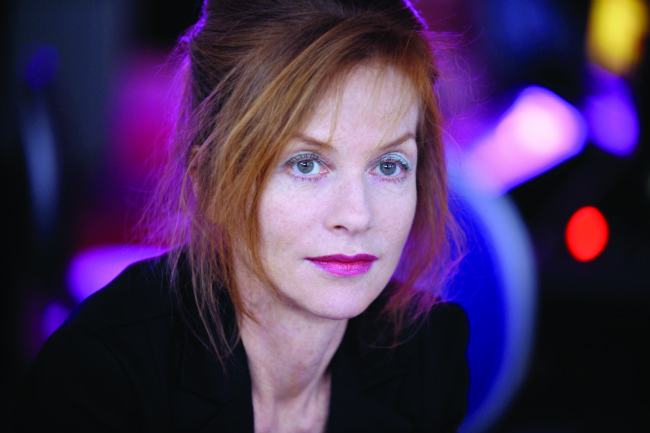 At Cannes Film Festival this year, TV cameras were present to film one of those jokey, sun-kissed rooftop cast photoshoots for Paul Verhoeven’s controversial new black comedy Elle. When the jazzily edited, bulbs-a-popping piece came on the evening news later, the item was fluffy and fleeting to say the least. The actors and director were lined up, smiling and posing like pros. But the eye of this writer was instantly fixed on the petite lady, smiling shyly in the middle, wearing a gold shirt and peach pantaloons. Isabelle Huppert’s powerful magnetism just can’t help itself.

She sits at the top table of grandes dames of French acting – Deneuve, Binoche or Adjani might pass her the salt – thanks not only to a long and remarkably wide-ranging screen and stage career but also the brutal honesty of her playing in often harrowing roles. Elle, about a woman’s unique response after sexual assault, is just such a film. Verhoeven (of Basic Instinct, Starship Troopers and Black Book note) made the film in Europe because “no American actress would take on such an amoral movie”, but Huppert seems to care little for controversy, as long as the words and director suit her creative needs and passion for originality. Her instincts are usually right – other memorably off-kilter roles include a homicidal post-office worker in Chabrol’s La Cérémonie and repressed music teacher Haneke’s La Pianiste.

Early career: Encouraged by her mother to begin acting, Isabelle attended Versailles Conservatoire and was awarded an acting prize for her work in Alfred de Musset’s Un caprice. After a distinguished theatre career she appeared in her first TV film in 1971, and has made regular movie appearances ever since.

I know the face… Isabelle tends to mainly appear in French language films, but made her American movie debut in 1980 in Michael Cimino’s ill-fated Heaven’s Gate and starred opposite Dustin Hoffman in the 2004 flick I ♥ Huckabees.

Where will we see her next? Isabelle has five films in various stages of postproduction, including Happy End with her favourite director, Michael Haneke.

C’est pas vrai! Isabelle is married to director Ronald Chammah, has three children and is friends with Kim Cattrall. She currently holds the record for being the actress with the most films entered in the official competition of the Cannes Film Festival (18 and counting).

Previous Article Book Reviews: Cooking for Picasso, a Novel by Camille Aubray
Next Article Where to Stay and Eat in Brittany