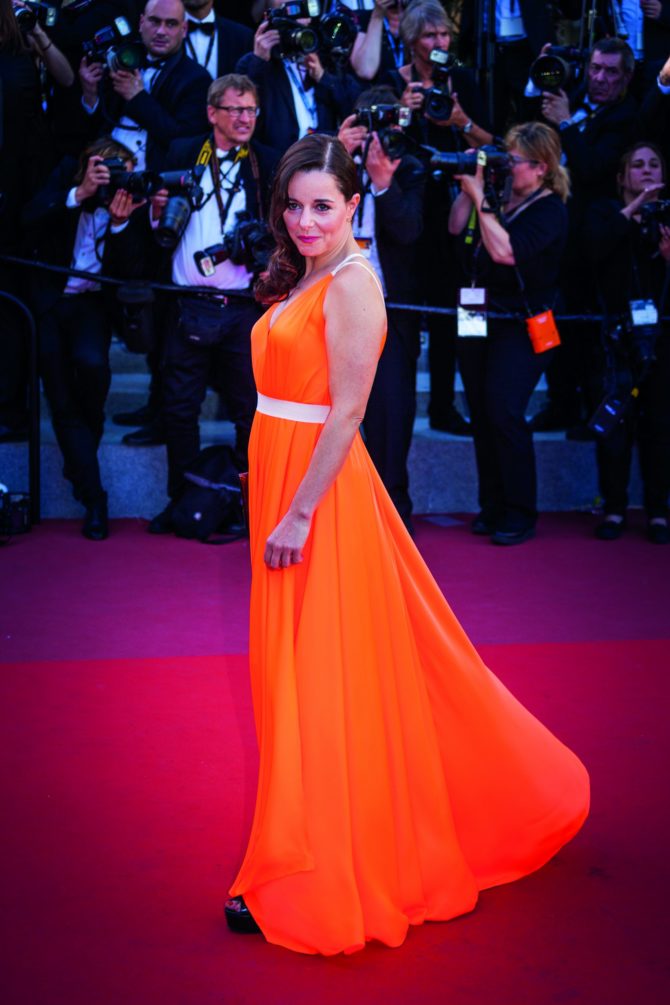 The Call My Agent! star won a César for her role in a wacky comedy which follows – donkey in tow – in the footsteps of Robert Louis Stevenson.

Laure Calamy has become a star both sides of the Channel – and across the Atlantic, too – thanks to her role as Noémie in hit comedy TV series Call My Agent!. And it is Noémie she thanks for landing her her first major role on the big screen – and what a debut it’s turned out to be, with Calamy winning the Best Actress Award at the Césars for her performance in Antoinette dans les Cévennes.

The comedy follows Antoinette and her faithful, if difficult, donkey, Patrick, through the Cévennes in the footsteps of her lover, Vladimir, who is on a donkey-trekking holiday with his wife and daughter. It is a route made famous, of course, by Robert Louis Stevenson, who published Travels with a Donkey in the Cévennes in 1879, detailing his own adventures in this stunning part of south-central France.

It’s been a long old road for Calamy, born in 1975 to a psychologist and a doctor, who first dabbled in theatre as a child. She graduated in 2001 from the Conservatoire de Paris, where she’d met Olivier Py, who went on to direct her in films such as Au monde comme pas y être and Les Parisiens.

While gaining critical praise for her performances, the big time eluded Calamy but the work kept flooding in in the form of short films and supporting roles in feature-length movies.

She scooped the Special Jury Prize for acting at the Sundance Film Festival for her performance as prostitute Suzanne in Cécile Ducrocq’s 2014 short La Contre-allée. The judges said: “In a role that is so often clichéd, this actress balances raw honesty with grace and clever choices that cut deep in startling ways. Powerful emotion is held just under the skin with the combination of subtle technique and remarkable emotional control.”

Calamy says she read the script for Caroline Vignal’s Antoinette dans les Cévennes in one sitting and believes the role was made for her. “I said to myself, this is for me – this person knows me!” she said.

Although it is a comedy, Calamy says she found it profoundly moving too: “We are rarely interrupted in our thoughts while walking. Therefore, one accesses things of oneself that we would not take the time to reach when we are stuck in the hubbub of city life. Walking, like Antoinette does, is almost akin to psychoanalysis.”

And although they say never work with animals, Calamy says she fell in love with her co-star. “Patrick blossomed during the shoot. We spent a lot of time together and we really created a relationship. During the last shoot, we were in the forest and he felt that the end was here. He licked my thigh and my hand, something he’d never done before. He’s a marvel.”

Early career: As a youngster, Calamy performed on stage and later, as a student at the Conservatoire de Paris, she hooked up with director Olivier Py.

I know the face…
Calamy has become an international star thanks to her role as Noémie in the hit comedy Call My Agent!.

Where will we see her next?
Keep your eyes peeled for Antoinette dans les Cévennes, a feast for the heart and the eyes. Also, watch out for her in Garçon chiffon, another French comedy-drama movie made last year and directed by Nicolas Maury.

C’est pas vrai!
Calamy is an ardent supporter of equal rights. In December 2018, she was among 70-plus celebrities who answered the call to action from Urgence Homophobie, an organisation which aims to combat anti-LGBT bullying, appearing in the music video for De l’amour. She is also a member of the 50/50 Collective, which promotes gender equality in the audio-visual arts.