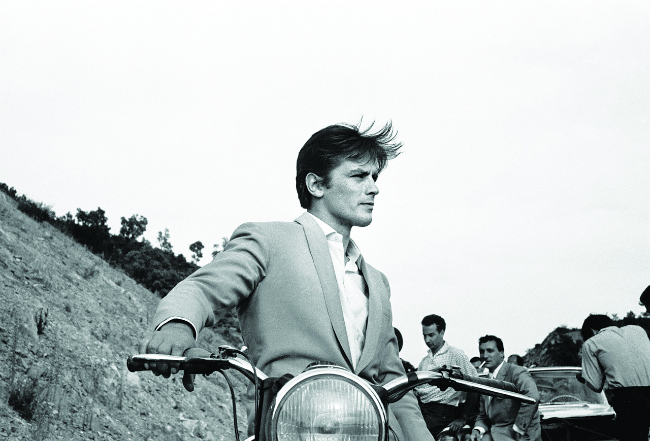 Inspectors Clouseau and Gadget famously sported beige trench coats as they went about their sleuthing business, but both slide into raincoat obscurity when compared to Alain Delon’s moody Mackintosh-wearer Corey in Jean-Pierre Melville’s 1970 elaborate heist classic Le Cercle Rouge (The Red Circle). With ice-cool, dead-eyed naughtiness he eats up the screen as a newly freed robber tempted by one more daring gig.

The film marked the end of a decade which saw the actor’s international status rise to stellar. His turn as Tom Ripley in Plein Soleil saw him garner critical acclaim, as well as the interest of Hollywood producers (he was mooted to be in the running to star as Lawrence of Arabia). By the late 1970s, not content with acting as a sole earner, he expanded out into all manner of commercial activities, from a helicopter business to boxing fight promotion and horse racing. He even launched a range of sunglasses. But his last big acting role was in 1998, since when he has lived quietly in relative privacy in Switzerland (he has dual citizenship).

His personal life has been eventful and would require several pages to do it justice, but in true French style, the public don’t care who he loved and lost (he was at one point engaged to Romy Schneider) – they see a French icon, a giant of the silver screen with a twinkle in his eye even at 81.

Early career: Before he was 20, Delon served in Indochina with the French marines and also worked as a porter at Les Halles in Paris. He made his acting bow in 1957’s Send a Woman When the Devil Fails by Yves Allégret.

I know the face… He posted very cool turns in Luchino Visconti’s Rocco and His Brothers (1960) then later Melville crime-thrillers such as Le Samouraï and Le Cercle Rouge, as well as alongside Jean-Paul Belmondo in the Marseille underworld classic Borsalino.

Where will we see him next? Don’t hold your breath for acting roles, although in September he gave a candid interview with France 2, still available online. He is frank on politics, Luchino Visconti and, of course, women.

C’est pas vrai! His father was of half-French and half-Corsican/Italian ancestry. His mother was of German/French descent, while his step father was a butcher – the young Delon nearly followed him into the trade. He has five grandchildren.