The French Film “Marguerite” Ponders What is Good Singing 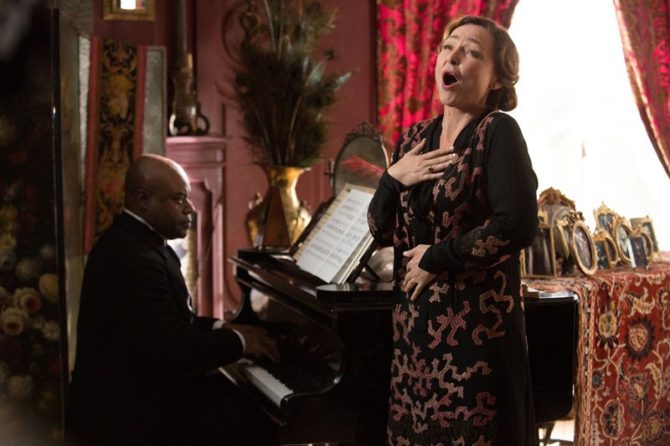 The character in the French film Marguerite is an opera singer who can’t sing, but decides to perform in a grand public concert hall. That’s only part of the story.

Marguerite’s life is opera, full of drama and music. Played by Catherine Frot who won the César for Best Actress, the character lives for the art form, from posing as prima donnas in photographs to singing the arias. Marguerite performs in private concerts and immerses herself into the character and song she is portraying. But with Marguerite, the fiction of character is played throughout her life, and the people around her are no different.

Marguerite’s world in the film directed by Xavier Giannoli is full of dissonance. Marguerite sings off key, off rhythm, off color, off register. But she doesn’t know it (or pretends not to) and her audience of husband, friends, household help and others playing in her world won’t tell her. It’s also a touching love story between Marguerite and her husband Georges (André Marcon), complicated by the relationships between her and her posse of followers. It explores the relationship between truth and the illusions that sometimes make up truth.

The life of Florence Foster Jenkins inspired the film, although it is not a biopic. Born in 1868 in Pennsylvania to a wealthy family, Jenkins gave her first recital at age eight, and reportedly sang for President Rutherford B. Hayes at the White House. But her father would not support her music career, so she ran off to Philadelphia with a doctor twice her age. Unfortunately, he wouldn’t support her music career either, but he did manage to give her syphilis, which damaged her hearing. She moved to New York and, after inheriting a nice income, and began a new life as a socialite.

Jenkins headed many high-society organizations, and became obsessed with becoming an opera singer. Like Marguerite, she was a horrible singer.  Jenkins sang in private and public locations, including the ballroom at the Ritz-Carlton Hotel, but no one told her she sang badly.  Instead, journalists praised her “real musical sense” and she sang at fund-raisers. She made a recording of an aria in Mozart’s The Magic Flute, making the trills sound like bird squawks. In 1944, at age 76, Jenkins decided to perform at Carnegie Hall. It became her literal swan song.  Outside the uncritical world she and her friends had created, she was so humiliated by the critic’s reviews that she died of a heart attack. Giannoli takes Jenkins’ plot and adds stories of love and friendship layered with illusion and the search for personal truths, along with the setting of Paris in the 1920s. According to Giannoli, the 1920s was an important time for both artistic and personal freedom.

“I wanted my character to distance herself from the old traditional society that prevented her from accomplishing her dreams, and from the new world that would lose her,” said Giannoli in an interview.

Marguerite’s singing is unique, and makes the audience question, “what is bad music?” Frot took voice lessons on how to sing out of tune well, and her music has a discourse that works. As two of the characters in her posse say after they first heard her sing, “She sings divinely out of tune, sublimely out of tune, wildly out of tune.”

The discordant music is a proxy for the world of deceit and lies around Marguerite. Everyone is using her by not telling the truth. The houseman, Madelbos (Denis Mpunga), is the photographer for all her opera diva scenes, from Brunnhilde in armor and helmet toLohengrin’s Elsa wearing a crown next to a white swan. She is his muse, and he records her life until the end. When asked why he is obsessed with the photography, he says that the photos of Marguerite will make him famous.

Her posse is also complicit in Marguerite’s fiction. Journalist Lucien (Sylvain Dieuaide) writes sarcastically glowing reviews of her that gives Marguerite the courage to sing in public. Her voice teacher Atos Pezzini (Michel Fau) is an out-of-work diva himself, and takes the job for the cash. Hazel (Christa Théret) is a young opera singer (with a good voice) who Marguerite sponsors and rents venues for her to perform. Felicity, the Bearded Woman (Sophia Leboutte) reads tarot cards, which she always interprets positively. Each one plays their faux support for Marguerite because they have much to gain.

But the real story is the evolving love between Marguerite and Georges. He is embarrassed and angered by her insistence on singing, but when she takes the chance to expose herself by singing in public, she exposes the soul of their relationship. Even Georges’ mistress understands, telling him that Marguerite is doing this “to make you look at her.”

At the end, when Marguerite sings on a public stage, the truth of her singing is revealed. But that truth also reveals the truth in her husband and her friends, and she brings out the best in them.

The movie also won César awards for Best Production Design, Best Costume Design and Best Sound. Sound is very much a part of the story, from the music to the screech of peacocks to car engines blowing up.  The visuals remind of the illusion: a giant eye in the garden, copious amounts of cut white flowers, the large, black rectangle that Marguerite’s teacher makes her sing to instead of him. The costumes reflect not only the era, but also the character’s feelings and illusions too.

In the end, Marguerite becomes an opera diva, and her success is photographed and memorialized by Madelbos. In her own words: “Either we dream life or we accomplish it.”

Previous Article L’Axel: Dining in Fontainebleau
Next Article Fun in the French Alps: Top Summer Events in Les Gets