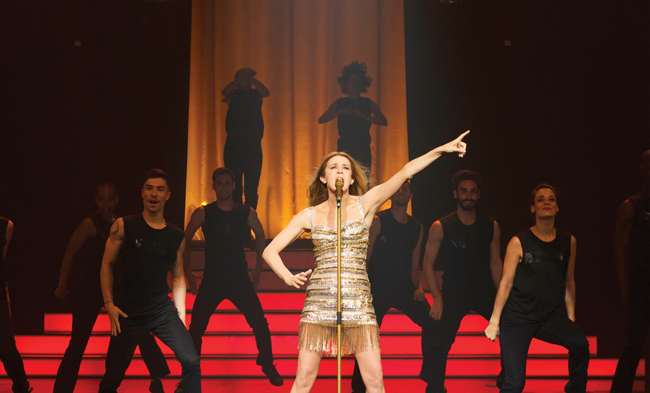 The Best Actress winner talks Céline Dion and playing a child at the age of 57.

Valérie Lemercier took home the Best Actress César this year for her performance as Aline Dieu in the movie Aline, a fictionalised biopic of Canadian songstress Céline Dion. The movie, which was also written and directed by Lemercier, was also nominated in the Best Director, Best Film and Best Original Screenplay categories. Impressive stuff.

However, the movie has got film critics around the world scratching their heads because of Lemercier’s decision to play Aline herself, even in childhood. Kyle Buchanan, of The New York Times, wrote: “Shrunk to Hobbit size and Facetuned into near-oblivion, Lemercier scampers, preens and unnerves. I’ve never seen anything quite like it…”

The Guardian’s Peter Bradshaw was inclined to agree: “Why in the name of all that is holy do that? For a terrifying instant, this looks like a biopic of Jimmy Krankie, or a horror film. Lemercier’s weirdly grinning, gurning face superimposed on the child’s head creates an unnatural chill that the film fails to shrug off.”

Nevertheless, despite the horrified reaction, Lemercier’s performance impressed industry experts enough to win her the gong – so what was it that made a woman in her 50s want to play a kid? It was, she said, important to “put my little heart and big body into the role” and experience total immersion in the character, even as a teenager.

This movie has clearly been a labour of love for Lemercier. She spent a year researching all things Céline before she even started work on the screenplay. Originally calling her character Céline, she says the story truly took off when she renamed her Aline and let the movie become a fictionalised version of Dion’s story.

Show must go on

“Above and beyond her talent, Céline’s honesty fascinates me: she reads like an open book, as she herself puts it,” says Lemercier. “She treats audiences like family. When I saw her in concert at Bercy, I was able to gauge the fervour around her, and how nice her fans are. I felt right at home… Although to a lesser extent, of course, I have spent a large part of my life on stage, in theatres, tents, dressing rooms… I’ve known long tours, meals swallowed in front of a mirror, the need to fill a room, having your voice every night and a body that will not let you down. I have felt an audience’s warmth, and the solitude that comes after the show.”

Lemercier has more in common with Céline Dion than you may realise: she too is a singer (with several records under her belt), although she did not perform the songs in the movie.

10-second CV: A screen star’s life in one take

Early career: Lemercier grew up in Gonzeville and studied at the Rouen Conservatoire, where she studied dance, music and drama. She made her screen debut in 1988, in the TV series Palace.

I know the face… Movie fans will know that Lemercier has won two Césars for supporting roles in Les Visiteurs (1993) and Fauteuils d’orchestre (2007).

She also hosted the award ceremony in 2006 and 2007. You may also have seen her alongside Harrison Ford in Sydney Pollack’s 1995 version of romantic comedy Sabrina.