Nearly 10 years on from his flirtation with Hollywood stardom, Jean Dujardin is back in the bosom of French cinema. He talks to Lanie Goodman about his latest film, Alfred Dreyfus, and what it’s like to win an Oscar when you don’t really speak English

Oscar-winning French actor Jean Dujardin never does anything by halves. Back in 2011, when he starred as silent movie star George Valentin in Michel Hazanavicius’s lm The Artist, he learned to tap dance convincingly enough to conjure Gene Kelly and mastered his body language and facial expressions by studying Charlie Chaplin and Douglas Fairbanks.

But for his lead role as Georges in Quentin Dupieux’s Deerskin (Le daim), presented at the Fortnight of Directors last May in Cannes, Dujardin faced a different sort of challenge.

“I had a real problem with this film when it came to preparing the role. The truth was, I couldn’t do it – and that in itself seemed significant,” says Dujardin. 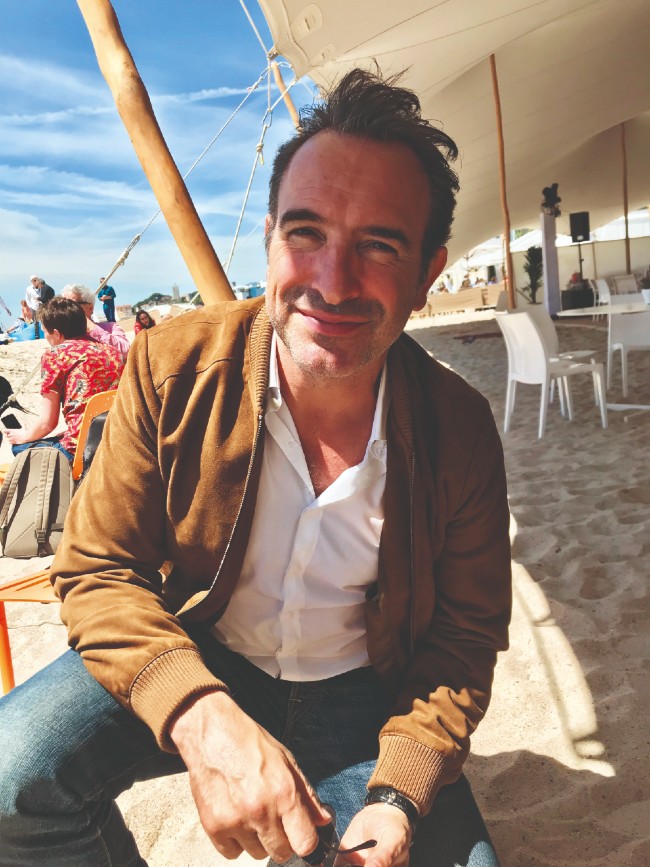 Jean Dujardin enjoys the May sunshine in Cannes sporting a suede jacket – though not
quite the kind he wears in the film. Photo: Lanie Goodman

We are sitting in the sunshine at one of Cannes’s private beaches, but there’s a chilly wind coming in from the sea. I’m almost shivering but have deliberately left my jacket in the car, for reasons that will become obvious once you’ve seen the movie. The 47-year-old actor is dressed in a classic-style suede jacket, not nearly as arresting as the fringed deerskin 1960s vintage treasure that his character sports in the film (“I picked it up at a second-hand shop to do press for the film”) and a pair of suede cowboy boots.

Although Dujardin is no stranger to wacky humour – silly capers like Brice de Nice, OSS 117: Cairo, Nest of Spies and OSS 117: Lost in Rio launched his film career – Deerskin plays on a slightly different register, since the main character slowly becomes unhinged and is driven to acts of absurd violence.

Typically, director-writer-DJ-musician Quentin Dupieux, who has garnered acclaim for such quirky dark comedies as Au poste! and Rubber, opens his film with a mystifying documentary-style scene: a series of adolescents putting their jackets in the trunk of a car, repeating the line, “I swear never to wear a jacket as long as I live”. But the audience soon understands that the real protagonist of the story is Georges (Dujardin), a paunchy, middle-aged man with an unkempt beard and a distracted, melancholy air who stops at a gas station and tries to flush his corduroy jacket down the toilet.

He winds around the snowy mountain roads in the desolate countryside until he arrives at a villager’s home – a crusty old-timer played by Albert Delpy, actress Julie Delpy’s father – where Georges blows his life savings on a fringed deerskin jacket, unearthed from a jumble of vintage clothes for sale. The old man tosses in a used video camera as a bonus, which prompts Georges to try his hand at making movies. By then, the audience understands that Georges, who has checked into a deserted country hotel and spends his days preening in front of the mirror with his “killer-style” jacket, is becoming bizarrely obsessed, and ecstatic, with his new look.

His wife having cut off all ties and blocked his bank account, Georges drifts to the neighbourhood bar hoping someone will buy him a drink and strikes up a relationship with an eccentric village barmaid, Denise (Adèle Haenel), who edits films as a hobby. Together they develop a half-baked film project that ultimately turns into a violent mission and is a highly-amusing romp into a character’s fetishistic madness.

It is certainly an odd character, and plot, to be drawn to… “There were actually two driving forces that led me to this role,” he says. “One was the idea of escape from reality, the other the fantasy of becoming completely anonymous, of losing yourself. I realised that I had to shut myself down for this part and regress into an almost animalistic state. I eat, sleep, contemplate a brook, hunt.

“All actors fantasise about playing psychotic characters or marginals, where you skid off the rails,” he adds with a smile. “But you need the right director, a good story and, most of all, I didn’t want to overact the part. I wanted to work on things in life that seem normal but are a bit incongruous at first.”

Early in the film, we hear the protagonist listening to the 1970s French hit song Si tu n’existais pas by Joe Dassin on his car radio. “To be nothing, live nowhere and no longer exist socially meant going straight to the essential question of existence,” he says. “It’s a big problem today, especially with Instagram and everyone putting a camera on themselves all the time.”

The desolate setting also played a significant role in developing Georges’s disconnection from reality. “We shot in the Vallée d’Aspe in the Pyrénées, where there are only about 2,000 people living within a 60-kilometre radius. People call the region a chamber pot, because it rains all the time, but it’s also very wild, very beautiful.”

As Georges develops an increasingly delirious relationship with his beloved deerskin jacket (which talks back to him in an authoritative tone), he finds himself obliged to become a serial killer. “I didn’t see his descent to rock bottom as a nightmare,” he explains. “When you’re alone you can think about all kinds of things and try everything. Georges just went the whole way, all the way to the end, like a feather in the wind. It’s a kind of suicide, a small folly, a pet peeve – a fixation starting with a jacket, but it could be anything, a pretext. I wanted to make him fragile, and that’s what throws him into violence. What I find frightening today is what you could call, ‘ordinary violence’. You know, the guy who stops at a red light and blows a fuse and will do crazy things.” 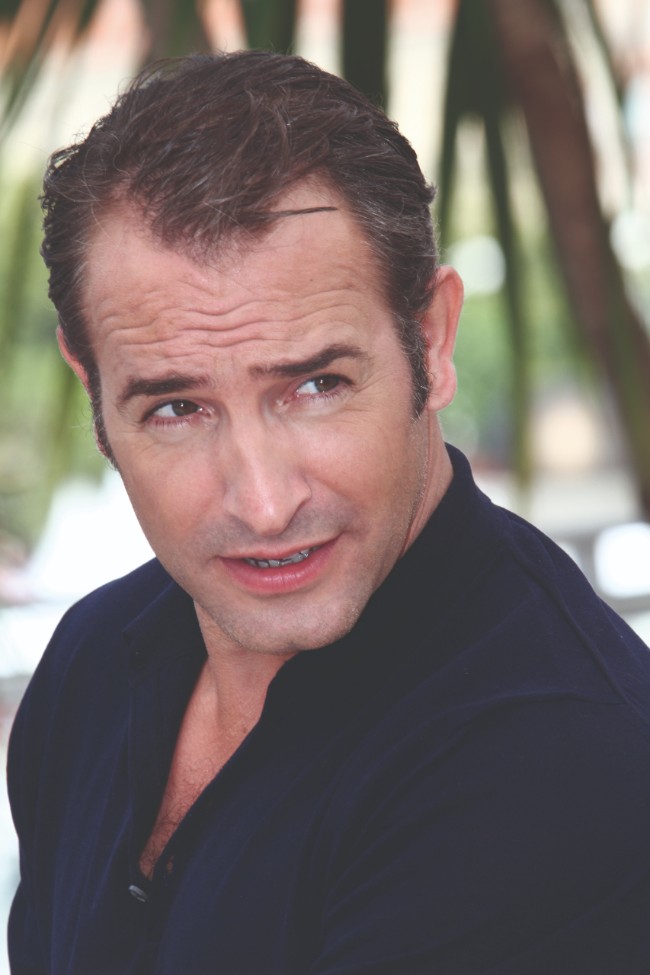 So what are Dujardin’s own obsessions? He takes a sip of water and leans back in his chair. “I have all kinds of small obsessions. Stains on my pants! I can’t bear that. And learning my lines, or over-learning my lines… They help me as a method, to get to the bottom of things,” he laughs. “But I’m not infatuated by material things. I’m not into cars, watches or clothes. At home, I wear jeans and a T-shirt in neutral colours, so I can step outside unnoticed. You know, in cinema, I’m very often very well dressed, made up and well lit and it’s all very beautiful but… it’s never me. I only have one desire when I come home: to not show myself and to disappear completely into my own life.”

The theme of obsession (of a different kind) is also central to Dujardin’s current film – Roman Polanski’s J’Accuse (now playing in France) – where he plays the part of Colonel Georges Picquart, who discovers that French army captain Alfred Dreyfus has been unjustly framed and wrongfully convicted of treason. It’s a true story, but the movie is based on Robert Harris’s historical thriller An Officer and a Spy, which is also the English-language title.

“Will the film heal a wound in French history? I don’t think so,” he says. “But Harris’s idea of using Picquart as a way of lifting the veil on that huge cover-up was a very good idea. And of course, the film is also very much about Polanski, and touches on his own obsessions: solitude and survival.” Dujardin co-stars with Louis Garrel as Dreyfus, Mathieu Amalric, Emmanuelle Seigner and lesser-known actors from La Comédie-Française in this decidedly French movie.

But, nearly 10 years on since his turn in the Academy Award-winning The Artist, would the actor be interested in a return to Hollywood? 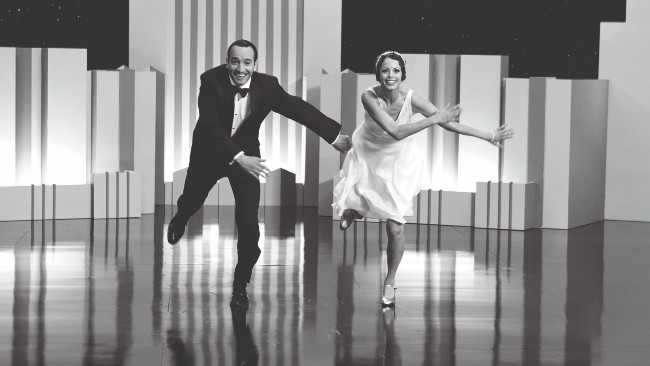 Dujardin with Bérénice Bejo in The Artist, a tale of rising and falling fortunes that won five Oscars. © STUDIO 37

“I haven’t been back to Los Angeles since The Artist,” he shrugs. “For me, the Oscar was a bit of a farce, considering my English. Maybe I was traumatised during grade school in my English class, but it didn’t gel then. And now, half the time, if I have to memorise lines in English, I don’t know what I’m saying!

“Don’t get me wrong – I was very happy to have the Oscar, but I can’t take it seriously. But if I can have three or four days in the States, and I’m really interested in the part, I will go, like I did for Scorsese’s The Wolf of Wall Street.”

And if the expression “Je voudrais me faire plaisir” (roughly, “I’d like to amuse myself”) is a constant in Dujardin’s appraisal of his own aspirations as an actor, he is equally adamant about how he intends to continue to have fun. For example, he loves Nice (“The light is exceptional!”) and can’t wait to return. His favourite way to unwind? Jogging on the Promenade des Anglais and wandering through the streets of the Old Town, incognito. If fans stop him for a photo, he says, he’ll oblige. He’s just that kind of guy.

“My career is in France and I’m very attached to French cinema,” he says, flashing another one of his sunny smiles. “Let’s face it: my best roles have been here in France and I know there will be more to come.” 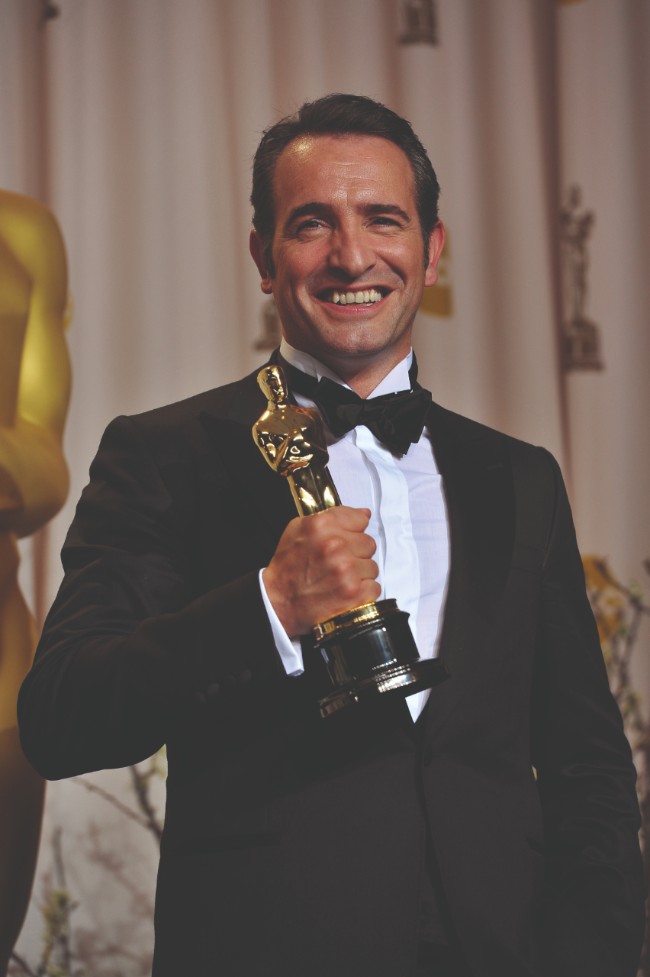 Dujardin receiving the Best Actor Oscar for The Artist, an award he thinks of as “a bit of a farce”. Photo: Shutterstock