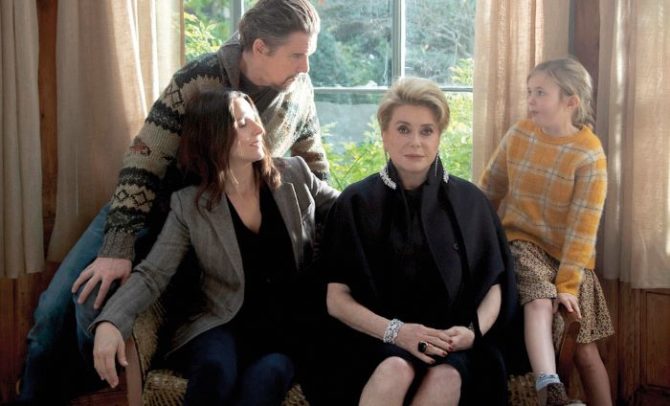 The true joy of this film is the double treat of Catherine Deneuve and Juliette Binoche, each commanding the screen while managing never to outshine the other.

They play famous actress, Fabienne Dangeville, and her scriptwriter daughter Lumir, who get together, along with Lumir’s husband Hank (Hawke) and daughter Charlotte (Clémentine Grenier) and Fabi’s long-suffering entourage, at the star’s Paris home.

The occasion is the release of Fabi’s autobiography, a gut-punch for Lumir, who has to come to grips with her mother’s version of events being not strictly truthful. At the same time, Fabi is filming a movie called ‘Memories of My Mother’, starring a younger, up-and-coming actress (beguilingly played by Manon Clavel), which sparks jealousy, cattiness and insecurity in Fabi.

The movie, written and directed by Japanese filmmaker Hirokazu Kore-eda, plays with layers of truth and deception and is a fascinating examination of female ego and how we create our own myths. For instance, Charlotte is beguiled by the notion that her grandmother is really the witch of Vincennes Forest, a popular children’s story, a notion Fabi confirms by telling her she turned her grandfather into Pierre, the enormous tortoise in the garden (it has to be said, grandpa and the tortoise are never seen together).

The film opens as Fabienne is being interviewed by a journalist, a deliciously toe-curling scene in which she withers and charms by turn, revelling in her diva nature and basically not answering any of the hapless hack’s questions. Think Bette Davis in All About Eve with a dose of Gloria Swanson in Sunset Boulevard. Ethan Hawke doesn’t get a lot to do as Hank, an American TV actor, but does a good job of looking bamboozled as the only non-French speaker in a rapid-fire world of bickering en français.

With dazzling performances all round, delicate droplets of humour and a probing intelligence about human nature, there is nothing about this movie not to love.