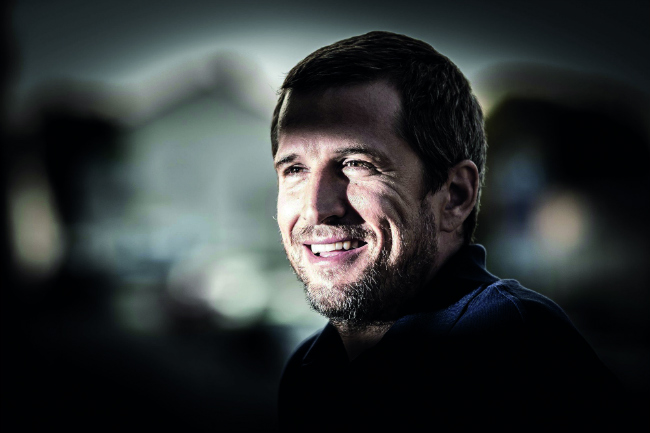 Acting may have been his back-up, but the retired showjumper-turned-golden boy of French cinema is riding high…

A competitive showjumper derailed in his prime by an injury and part-time circus apprentice to boot, Guillaume Canet wasn’t exactly the obvious candidate as French cinema’s golden boy.

Yet, when a nasty fall dashed his dreams at the age of 18, the resilient rider dusted himself off and set his sights on acting instead. After three short months at drama school, in 1994 the heartthrob landed his first stage role, propelling him into the orbit of a few choice directors and heralding what has to be the smoothest rise to stardom in film history. In 1997, he copped his movie breakthrough in thriller Barracuda for which he won Best Actor at the Festival de Saint-Jean-de-Luz. A year later, his turn in crime drama En Plein Coeur earned him a coveted Best Newcomer nomination at the César, flinging open Hollywood’s gilded gates.

His seething intensity and cherubic charm soon caught the eye of Danny Boyle who cast him in The Beach. The blockbuster’s mixed reception did little to hamper his thriving career at home and after totting up a string of critically acclaimed roles, the whizz-kid of the silver screen turned to directing. His debut film, Mon Idole, in which he starred opposite his then-wife Diane Kruger was nominated for Outstanding Debut at the César, establishing him as the Midas of arthouse. His second feature, Tell No One, a gritty adaptation of Harlan Coben’s bestselling thriller, scooped the coveted Best Director gong in 2006; while his third acclaimed outing, Little White Lies, a bittersweet tale of friendship and redemption, topped the box office in 2010.

For all his kudos – six César nominations and one win to date – the ‘serious’ filmmaker is not opposed to a little comic relief; or as one or two mud-slinging critics have put it, “outright piss-take”… When a journalist all but called him “past it” in an interview, strongly implying he was withering in the shadow of his partner Marion Cotillard (the term “Monsieur Cotillard” may have been bandied around!), he retaliated with Rock’n Roll – a madcap ‘mockumentary’ laying his life bare and charting his spiralling mid-life crisis. He even cast Cotillard as his long-suffering other half in the jacked-up (and award-nominated) caper. That’s one way to shut up the haters.

Back to familiar territory once more, Canet is set to direct and star in Nous Finirons Ensemble, the much-awaited sequel to Little White Lies, picking up seven years after the motley crew’s ill-fated holiday. And it seems we’re in for another bumpy ride…

Early career: After a fall forced the competitive showjumper (he made the national team) into early retirement at 18, Canet enrolled in drama school and swiftly landed his first stage role. His breakthrough in thriller Barracuda established him as one of France’s fastest rising stars in 1997.

I know the face… He made his international debut in The Beach. You may have also spotted him escorting his long-term partner Marion Cotillard on the Oscars’ red carpet.

C’est pas vrai! Canet joined the circus (part-time) at 14. In a bid to keep wayward pupils on the straight and narrow, his school sent its worst eggs (Canet included) to the local troupe to “learn discipline” (and juggling).