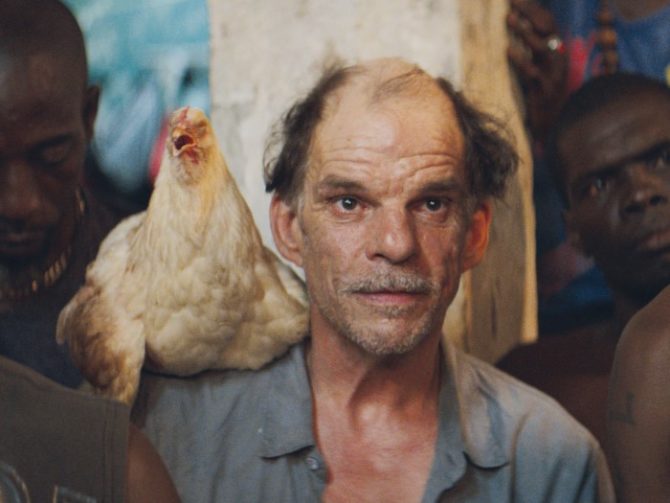 His uniquely physical style and haunting performances have made this legendary actor one of France’s most extraordinary and unusual screen stars.

When asked about casting Denis Lavant in the starring role of Holy Motors, director Leos Carax said: “If Denis had said no, I would have offered the part to Lon Chaney or to Chaplin. Or to Peter Lorre or Michel Simon… all of whom are dead.” High praise indeed – and it’s not just Carax who’s a fan.

In March last year, The New Yorker film critic and expert on French cinema Richard Brody ranked Lavant’s performance in Holy Motors, in which he plays an actor travelling around Paris in a white limousine, morphing from character to character, sometimes monster, sometimes victim, as the fourth best movie performance of the 21st century so far, saying: “It (the movie) provides an extraordinary showcase for Lavant’s virtuosity and self-scourging vulnerability, his soulful tenderness and reckless ecstasies; its theatrical artifices seem extruded from the actor’s soul to reveal the essence of his art – and the essence of the cinema itself.”

And so it is that this odd goblin of an acrobatic actor, with his wild hair and pock-marked face, is considered to be among the luminaries of the acting world, past and present. Given his penchant for physicality, it will come as little surprise that as a young teen, Lavant fell in love with legendary mime artist Marcel Marceau. He studied panto and circus skills and trained at the Paris Conservatoire under the acclaimed Jacques Lassalle before embarking on a career in theatre, followed by some roles in television films, including a small part in Robert Hossein’s 1982 version of Les Misérables. But his breakthrough came in 1984 in Carax’s directorial debut, Boy Meets Girl. It was the beginning of a beautiful friendship, and Lavant and Carax worked together on Mauvais Sang in 1986 and Les Amants du Pont-Neuf in 1991.

It wasn’t an exclusive relationship, however, and in 1999, Lavant played one of the leads in Claire Denis’ Beau Travail. In 2007, he appeared in Mister Lonely, directed by Harmony Korine, having learnt to speak the script phonetically as he doesn’t speak English. A year later, he reunited with Carax for the anthology Tokyo!. Their section of the movie, called Merde, sees Lavant playing a violent sewer-dwelling monster.

Last year you saw him as Silence, the (Shakespearean-style) fool, in one of the most talked about movies of the year, La Nuit des Rois, directed by Philippe Lacôte. A young man is sent to the overcrowded La Maca prison in Abidjan, where he is commanded by ageing and sick inmate-boss Blackbeard to tell stories for an entire night, in echoes of Scheherazade’s 1,001 Nights. From Shakespeare to Chaplin, although renowned for his physical story-telling, Lavant is an actor of tender understatement who expresses the absurdity of humanity from every fibre of his being.

Early career: As a teen he loved Marcel Marceau, the legendary mime artist, and was inspired to study circus and pantomime skills… and then TV and the movie world beckoned, before his collaboration with Leos Carax saw him hit the big time.

I know the face… Lavant has appeared in nearly every Leos Carax film.

Where will we see him next? He plays Silence in Philippe Lacôte’s La Nuit des Rois. He is also due to star in Blood Burn, a French-Georgian gangster thriller directed by first-timer Akaki Popkhadze, inspired by his experience of moving to a less-than-salubrious part of Nice from Georgia when he was a child.

C’est pas vrai! In 2016 he starred in a 30-second film directed by Yorgos Lanthimos to accompany the song Identikit by Radiohead. He’s also the chap in the Parka wandering down the middle of the tunnel in UNKLE’s Rabbit in Your Headlights video, directed by Jonathan Glazer.

Previous Article A Conversation with Cheese Expert Emily Monaco
Next Article A Gift for the Ages: The Statue of Liberty