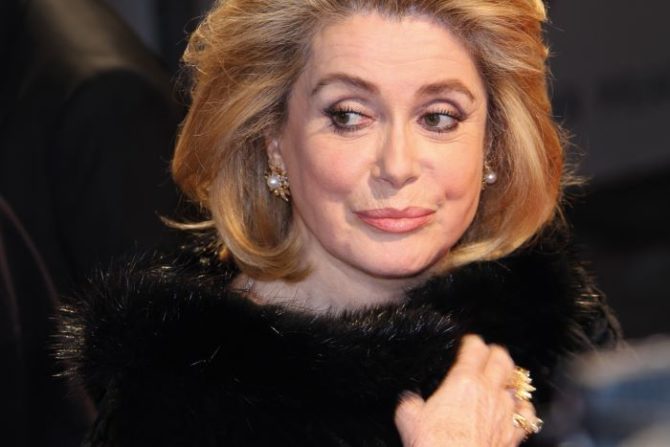 She was the original ice blonde and has gone on to become one of France’s most respected actresses. Allow us to introduce you to this grande dame of cinema…

“These days I am treated like an institution,” Catherine Deneuve said in a 2019 interview with the Sydney Morning Herald.

And little wonder. In a career that has spanned an astonishing 64 years, she has made over one hundred movies, and has become the epitome of the icy blonde beauty. She is a legend not just in her native France but around the world, making movies in both French and English. And at the age of 77, she is still going strong.

Deneuve’s career began at the tender age of 12 in André Hunebelle’s 1957 comedy drama Les Collégiennes in which she appeared alongside her younger sister, Sylvie Dorléac.

But it was Jacques Demy’s 1964 musical The Umbrellas of Cherbourg which catapulted the then 21-year-old Deneuve to stardom. From the outset, she worked with the greats, appearing in Roman Polanski’s ground-breaking Repulsion in 1965 and in Luis Buñuel’s Belle de Jour in 1967, both seminal works of Sixties cinema. Belle de Jour won her a BAFTA award for Best Actress, and her awards shelf must be mighty long as the baubles have continued to pile up ever since.

She won the Academy Award for Best Actress for Régis Wargnier’s Indochine, the 1998 Volpi Cup for Best Actress at the Venice Film Festival for Place Vendôme and she took home Césars for The Last Metro (1980), directed by François Truffaut, and again for Indochine (1992). And we haven’t even got on to her English-language films yet, movies such as The April Fools (1969), Hustle (1975), The Hunger (1983) and The Musketeer (2001), which served to win her adoration from across the Atlantic.

Movies aside, Deneuve has also worked as a model, beloved of Yves Saint Laurent (who dressed her in numerous films, including Belle de Jour), and in the late 1970s, she became the face of Chanel No. 5. In fact, her association saw perfume sales rocket in the USA and she soon became the darling of the American press. Such was her popularity that in 1983 she was hired by American Home Products to promote their line of Youth Garde cosmetics, for which she famously proclaimed, “Take a closer look – this year I’ll be 40.” Women across the country rushed to buy in the hope of looking as good.

In 2005, she published her diaries À l’ombre de moi-même (In My Own Shadow, published in English as Close Up and Personal), allowing fans a glimpse behind the scenes of this extraordinary actress’s life. She says, by the way, that she doesn’t mind being an institution – but it’s important to remain vigilant and not rest on one’s laurels. That’s certainly not something Catherine Deneuve can be accused of so far…

Early career:
Her first role saw her appear alongside her sister in Les Collégiennes, a comedy drama about a beautiful teenager who tries to marry a composer, but her teachers are determined to try to stop her.

I know the face…
You should – she has appeared in a long list of major films, her most famous roles being in Belle de Jour, Repulsion and The Umbrellas of Cherbourg.

Where will we see her next?
La Vérité in which she co-stars with Juliette Binoche. It showcases Deneuve’s talents at their best – don’t miss it, it’s available to rent online on YouTube.

C’est pas vrai!
Marianne, the national symbol of France, took on Deneuve’s face in the 1980s. It has been a tradition since the 1960s, with famous women such as Brigitte Bardot and, most recently, Sophie Marceau becoming Marianne.

Previous Article Book Review: The Spy Who Inspired Me By Stephen Clarke
Next Article Exclusive Recipes: How to Dine like the French