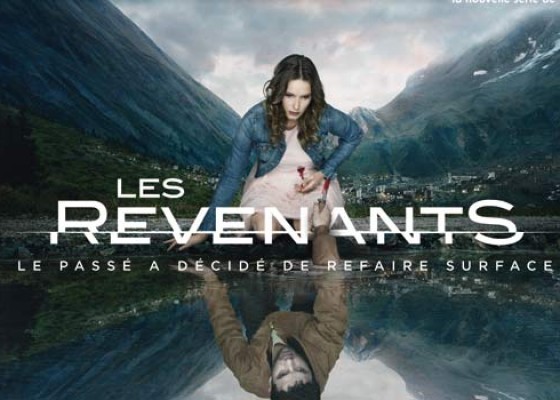 SOMETHING IN THE WATER

When it first hit English-language TV screens in spring 2013, after originally airing in France during 2012, this u?ber-cool, stunningly shot French zombie series was as baffling as it was beautiful. It’s set in an eerily humdrum Alpine village where the main point of interest was a giant dam, until Camille, the ‘undead’ teenage victim of a coach crash, ambles back home to raid the fridge, saying, “The weirdest thing happened to me…”

As more victims re-appear, the grief of those left behind comes under scrutiny, the dam begins to empty and lightbulbs flicker in the village. There’s the obligatory strange child who reappears at windows, despite having been dead for 30 years; a musician who was killed before his wedding wreaking havoc upon his ex’s new life; and a serial killer seems to be at large, adding terror to the torment. The tone of this stylish series hovers delicately between the real and the surreal.

In addition, it boasts a fabulously haunting soundtrack by the Scottish guitar band Mogwai, who also scored the Zidane: A 21st Century Portrait documentary of 2006. This superior crime and justice drama kicked off in 2005 and series six is now being made. Through each of the five gripping series, a main story arc is woven expertly into the ongoing professional and personal tribulations of the key players.

There’s the tight-knit team of Parisian cops led by the uncompromising Inspector Laure Berthaud (Caroline Proust), who’s ably assisted by the rule-breaking Gilou and Tintin, a family man. Then there are the lawyers, including will-they-won’t-they Pierre (Grégory Fitoussi) and Joséphine (Audrey Fleurot), possibly TV’s most handsome couple. And the enigmatic Judge Roban (the brilliant Philippe Duclos), a man so utterly committed to justice that he often alienates those in high places.

Thrills and spills aside, Spiral provides a fascinating insight into how, in France, the police work so closely with a prosecuting judge to solve a case, rather than just decide whether defendants are guilty in court. Taking its name from street slang for a particularly violent robbery or heist, Braquo upped the ante for gritty French police thrillers when it appeared in 2009.

From its no-holds-barred depictions of police interrogation techniques (creative use of a ballpoint pen, anyone?) and a rather literal bloodbath, it’s certainly not for the squeamish. But given that its writer and creator is Olivier Marchal, who’s a former flic and made the film 36 Quai des Orfèvres (2004), it’s hardly surprising that the reality of under-the-radar police work bites so hard. Jean-Hugues Anglade (Betty Blue’s love interest, remember him?) is the weather-worn leader of a ruthless police gang who tackles the cases that other officers are too weedy to accept. CAN I GET A WITNESS?

With all the creep of a Nordic televisual spine-chiller, this six-parter set in the grey northern French coastal town of Le Tréport teases out dark secrets and lies as two cops investigate the discovery of recently grave-robbed bodies which have been strategically placed in newly-built show homes – these are called a maison-témoin in France, andtémoin also means witness.

Clues at the crime scenes point to something lurking in the past of former top cop Paul Maisonneuve, who’s played by the ice-cool Thierry Lhermitte. His ally is Sandra Winckler (stage actress Marie Dompnier, in her first headline screen role), with whom he once trained and shares a past.

This fairly linear police procedural is elevated by some truly nerve-shredding action set-pieces, especially when the sinister focus of the manhunt gets screen time with his white-painted face – hold on to your chapeau and have a cushion ready to hide behind. Given that this series’ two main characters are twitchy, freaky, bumbling cops on the trail of a serial killer who leaves body parts inside dead cows, there isn’t exactly ‘knockabout’ dark humour at play here – rather, it’s decidely pitch black. That isn’t surprising since it was helmed by Bruno Dumont, who eschews the harrowing social realism of his early works, such as L’Humanité (1999), but retains a bleak otherworldliness in tone and location. It’s like being hit hard on the head with your own funny bone.

P’tit Quinquin (played with a knowing glint in the eye by newcomer Alane Delhaye) is the cheeky, naughty young boy who watches the unfolding case from as close as he can get. With its ensemble of simpletons and oddballs who seemingly inhabit a parallel universe to modern France, this four-part series might not be – in the same way Bienvenue Chez les Ch’tis (2008) wasn’t – very popular with many residents or tourist authorities in north-eastern France. But as a brilliantly skewed, Twin Peaks-esque take on crime drama, it’s about as good as it gets.