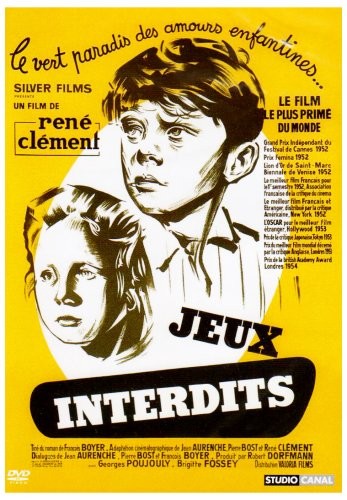 Compared to Hollywood, French cinema hasn’t produced many child stars, but a few young French actors grew up to become full-blown stars. Here’s a look at the films that launched their precocious careers:

Jeux Interdits (Forbidden Games) René Clément, 1952
In 1952, France discovered angelic five-year-old Brigitte Fossey, cast as an innocent child orphaned in World War II who plays not-so-innocent games involving dead animals. Jeux Interdits won the Honorary Academy Award for Best Foreign Language Film in 1953, and Fossey later starred in the 1957 Gene Kelly comedy The Happy Road. After this film, her parents wisely decided that she should withdraw from cinema to pursue her studies. In 1967 Fossey made her comeback in the iconic adaptation of a masterpiece of French literature, Le Grand Meaulnes (The Wanderer) by Jean-Gabriel Albicocco. Fossey, also an accomplished stage star, became one of France’s most popular actresses of the 1970s and 1980s.

For his first film, a semi-autobiographical account of his troubled teenage years, François Truffaut auditioned hundreds of young boys to play his alter ego, Antoine Doinel, before finding 13-year-old Jean-Pierre Léaud. Watching his candid screen test, Truffaut knew at once that Léaud was his ideal Antoine Doinel. Léaud’s spontaneity is largely responsible for the authentic feel of the unforgettable Les 400 Coups. Truffaut and Léaud made six other films together, including four sequels to the Doinel saga—the last one, L’Amour en Fuite (Love on the Run), in 1979. Léaud became the face of the New Wave and during his long career collaborated with film masters such as Jean Eustache, Jacques Rivette, Agnès Varda, Bernardo Bertolucci and especially Jean-Luc Godard, with whom he made nine films.

Sophie Marceau became an instant star at the age of 14 when she starred in La Boum and its sequel, La Boum 2 (1982). The films captured the essence of French teenage life in the 1980s and were phenomenal successes. In a unique cycle, Brigitte Fossey played Marceau’s mother in the Boum films, and Marceau went on to star as the mother of Lola, played by young actress Christa Theret, in the 2008 teenage hit comedy LOL (Laughing Out Loud). After her splashy debut, Marceau made wise career choices, alternating good commercial comedies and challenging independent dramas. In the United States she is best known for her role in Mel Gibson’s Oscar-winning Braveheart (1995) and as the villainous James Bond girl in The World Is Not Enough (1999). Marceau, who has also directed two feature films, remains one of France’s most beloved actresses.

Benoît Magimel’s career began at age 14, with the role of Momo, a boy raised by a poor white trash family, who learns that he was switched at birth and must reunite with his biological family, the wealthy, religious Le Quesnoys. Twenty-three years later Chatiliez’s hilarious satire has gained cult status in France and Magimel is one of France’s most respected actors. He has worked with prominent filmmakers including Claude Chabrol, André Téchiné, Mathieu Kassovitz and Michael Haneke, starring in both popular and more challenging roles. Magimel is among the all-star cast of the 2010 French box-office hit Les Petits Mouchoirs (Little White Lies) by Guillaume Canet.

Singer Vanessa Paradis gained international fame and became France’s darling in 1987 at age 14 with the sweet pop song Joe le Taxi. In 1989 she made a surprise movie debut in Jean-Claude Brisseau’s highly controversial Noce Blanche, about a passionate love affair between a 50-year-old high school philosophy teacher (Bruno Cremer) and his rebellious 17-year-old student. Her impressive performance won the 1990 César for Most Promising Actress. Since then she has built successful parallel careers in music and cinema. She has starred in 11 films since Noce Blanche, including the 2010 hit romantic comedy L’Arnacoeur (Heartbreaker) directed by Pascal Chaumeil. Most US fans know her as Johnny Depp’s partner and the mother of their two children.

Sandrine Bonnaire: A Nos Amours (To Our Loves) Maurice Pialat, 1983