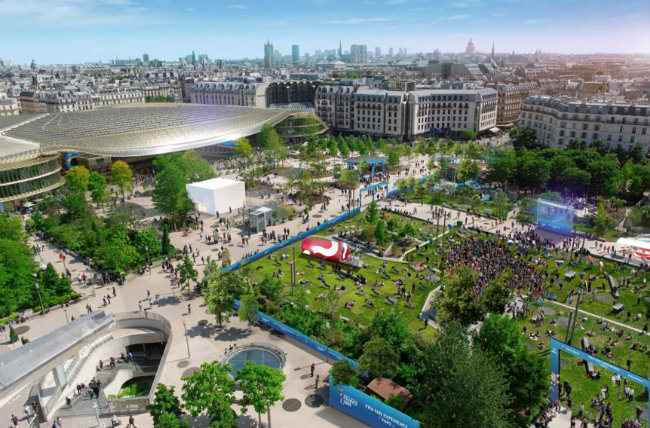 The FIFA Women’s World Cup is now taking place in France until July 7. All eyes are on France’s footballeuses as they make their championship bid on home turf. Hopes of a double-whammy victory following the male team’s World Cup win last summer are sky-high. No pressure…

Held on Friday, June 7, the opening match between France and South Korea was played before a jubilant, sold-out crowd at the Parc des Princes in Paris. The French host team clinched an overwhelming victory, 4-0. The New York Times called its dominance “comprehensive” as “it outshot the Koreans by 21-3 and won 13 corner kicks to Korea’s one. The French were physically, technically and tactically superior at every position.” The televised match on TF1 drew a record audience for women’s football: 9.8 million téléspectateurs.

The defending champions are the United States, who will first play Thailand today.

A total of 52 matches are being played in nine cities around France: Valenciennes, Le Havre, Reims, Paris, Rennes, Lyon, Grenoble, Nice, and Montpellier. In Paris? If you can’t nab tickets to one of the seven games being hosted at the Parc des Princes stadium before June 28, head to the FIFA Fan Expérience area at Jardin Nelson Mandela in Les Halles. Between 2 pm and 11:30 pm on each game day until July 7, you can hang out and watch the games, cheering on your team in a fun ambiance. Free and open to the public.

Previous Article Dispatch from Normandy: Honouring D-Day Veterans on the 75th anniversary
Next Article Masterpieces of the Guggenheim in Provence