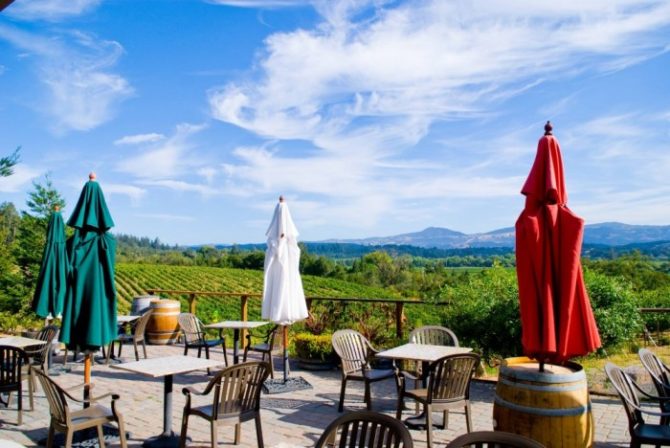 Feel the need to celebrate Bastille Day on the West Coast while the Marquis de Lafayette’s replica ship, the Hermione, visits ports along the Eastern seaboard? The San Francisco Bay Area has lots of impressive Bastille Day events throughout the bay, from northern Napa to the South Bay, fulfilling anyone’s need to party and enjoy food, wine and music in a variety of venues. (But no fireworks are allowed, because they are illegal almost everywhere in California. Zut!)

Bastille Day events start early. On Thursday, July 11, Pauline Carmona, the Consul General of France in San Francisco, will join the Official Committee of French-American organizations of San Francisco in celebration at the Basque Cultural Center. Dinner and dancing are on the menu, including Baked Alaska for dessert.

If that’s too tame, head over to the Hotel Rex at Union Square to join Lua Hadar and her jazz ensemble for Bastille-Day-With-A-Twist. A combo of French songs and American swing will provide a “French Music Hall” show that should have everyone out of their seats and dancing.

On Sunday, July 12, the French Garden Fete, will be hosted by Maison de la Culture Noire Americaine, and supported by Alliance Francaise de San Francisco (AFSF.)  Held in Healdsburg at Esterlina Vineyards, it will feature dinner prepared by cookbook author and Cordon Bleu trained chef Jenifer Hill Booker. In this Monet garden-inspired setting, Booker will put a French spin on her cooking, including such dishes as Southern-style hoe cakes with molasses, fresh churned butter and chicken liver paté. Miam!

If you want to get your pétanque game on, head to Justin Herman Plaza in San Francisco for the Francophones à San Francisco 10th Grand Tournoi de Pétanque and Fete du 14 Juillet. Co-organized with Consul General Carmona and the Consulate General of France, it promises to be a big event for the Francophones (and francophiles) with more that 150 players signed up to date.

“There will be wine, music, food, French products to explore and lots of sponsors offering prizes,” said Erwan, organizer of the event. “San Francisco is the number one community for French patriots. We come for the jobs and opportunity, because we can make it happen here.”

Consul General Carmona agrees that the 60,000 French in the Bay Area consider it special. “San Francisco is such a European city,” she said.  “Many French come here for education or training, and find a strong attachment, so they want to stay. The beauty of the Bay Area, its special cultural climate and friendly welcome from the people makes us feel good in San Francisco.”

In fact, on Friday, July 10, Consul General Carmona will be at San Francisco City Hall for a flag raising ceremony hoisting the French tricolor as a start to celebrating the city’s Bastille Day events.

On the big day, Tuesday, July 14, celebrity chef Hubert Keller (Fleur de Lys and Burger Bar restaurants) will turntable his DJ skills at San Francisco’s Hawthorn Club, with the support of AFSF. He’ll spin records with his friend and DJ teacher Frenchie le Freak, starting at 11 pm.  Earlier DJs for the evening are DJ Dao and Frank Boissy. How they juggle riffs from La Marseillaise should be all that.

Lots of other events will take place throughout the Bay Area on Tuesday. As a mid-week event, the celebrations will be music and special menus at French cafés, bakeries or restaurants. Costeaux French Bakery in Healdsburg promises to have music and a costumed Marie Antoinette claiming, “Let them eat biscotti.” Alors, that makes a couple of anachronisms, but biscotti are always good.

The celebration continues to the next weekend, Saturday, July 18, when the Occidental Center for the Arts presents the Bastille Day French Music Concert featuring trios La Guinguette and Un Deux Trois. La Guinguette will play traditional street café music, while Un Deux Trois will blend modern dance with the traditional.

Whatever your taste, the San Francisco Bay area celebrates Bastille Day with great enthusiasm, and spreads out the party for a week this year.  Except no fireworks. Can I say “zut!” again?

Martha Sessums is the France Today Ambassador for San Francisco

Lua Hadar with Twist at the Hotel Rex