San Francisco Celebrated the Original Bastille Day, and Kicked It Up in 2017 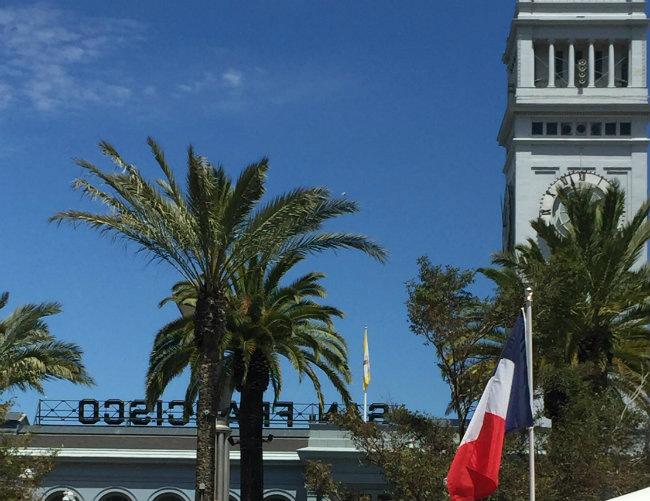 It wasn’t until 1880 that France officially chose July 14 as a national holiday to honour the French Republic. That was 91 years after Parisians stormed Bastille Prison, a turning point in the French Revolution. In support of the Republic, San Francisco’s French community also celebrated La Fête Nationale in 1880, and has continued with large and small celebrations throughout the years. But 2017 could be a turning point in raising the level of celebration.

The French language and culture association Comité Officiel held a kermesse (an outdoor party) on Saturday, July 15 to celebrate Bastille Day. The location was Justin Herman Plaza, a popular gathering place across from San Francisco’s Ferry Building along the Embarcadero. Twenty French organisations participated with food, drink and product booths, pétanque lessons and demonstrations, vintage Citroëns on display, an address by the French Consul General, singing of the French and American national anthems, and ending with a Bal Populaire featuring French bands. It was the largest organised Bastille Day celebration in San Francisco since the 1960s.

“Every generation is different,” said Max Bouchard, Vice-President of Comité Officiel, which is experiencing a reboot by putting on this year’s event. “When I arrived in California in the 1960s, there was no Silicon Valley yet, and the French community often felt isolated. Now, in the 21st century, we have easy networking using the internet and growing opportunities for French businesses, from fashion to technology.”

In addition, San Francisco has a French Consul General that is very involved in promoting French businesses, technology, culture, language, education and sharing the spirit of celebration for Bastille Day throughout the Western region of the U.S. 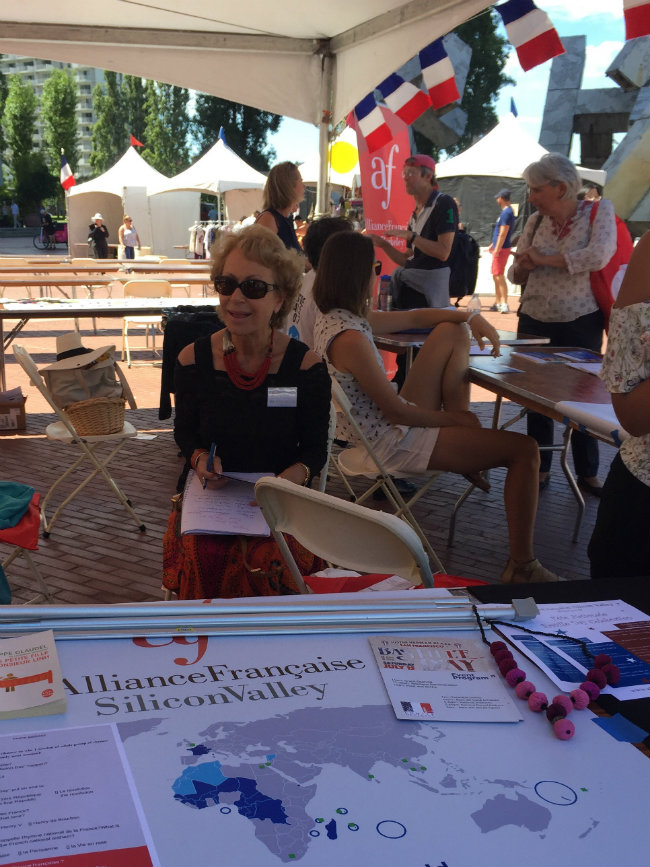 “This is a bonding day for the French community all over the globe,” said Emmanuel Lebrun-Damiens, Consul General of France in San Francisco. “On this day, we come together to celebrate our traditional values of tolerance, inclusiveness and freedom…The French community is optimistic and has a positiveness I enjoy.”

To celebrate that spirit, Lebrun-Damiens held a Bastille Day event at the French Residence in San Francisco on Friday, July 14. The residence is located in one of San Francisco’s fog belts in Cole Valley, between Twin Peaks and the eastern end of Golden Gate Park. The first attendee to the party was Karl the Fog, who snuck in quietly as he always does. But then a hundred or so people attended, including California State Representatives from the Bay Area, business and education leaders, and other supporters of the French community. 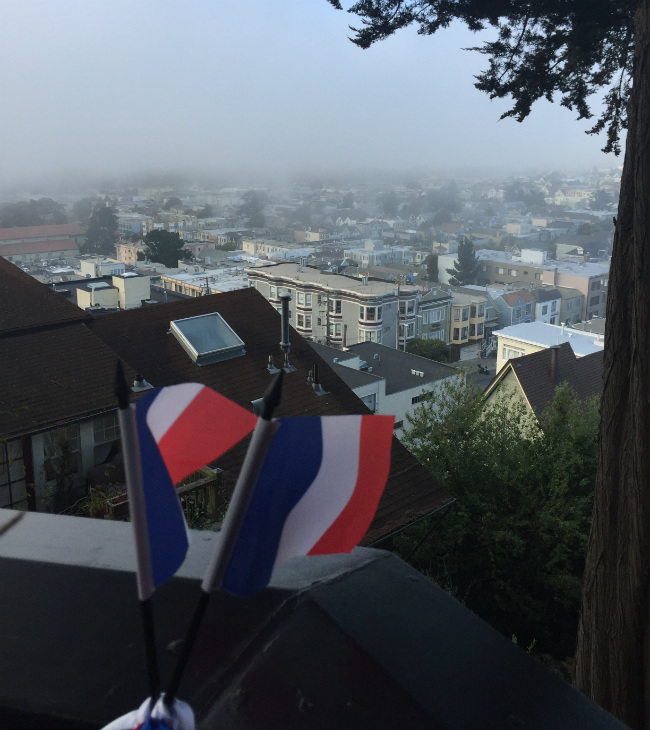 Karl the Fog hanging out over San Francisco, as seen from the residence. Photo: Martha Sessums

Lebrun-Damiens made a speech thanking the people in the room for “animating the growing French community,” and reminded them of the current business climate that shows a growing French strength and cooperation. Silicon Valley is an inspirational leader, and Paris recently opened Station F, the largest start-up campus in the world. Facebook and other U.S. tech companies and investors will participate in it. San Francisco and California have chosen to support the tenants of the Paris Agreement, and Lebrun-Damiens reminded the crowd of French President Macron’s pledge to “make our planet great again.” He encouraged attending the kermesse the next day, and thanked Comité Officiel and those participating for their support.

He also reminded the crowd that this year is the 100-year anniversary of the U.S. entering WWI. On June 25, 1917, American troops arrived in France. After four months of training, they entered combat in the Luneville sector near Nancy. Despite initially being unprepared “doughboys,” the Americans brought much needed supplies and a new spirit to the war, which ended 16 months later.

Then La Marseillaise, the French national anthem was played, accompanied by a few shy voices singing along. When the Star-Spangled Banner was played, no one attempted to sing since it has those high notes half-way in. But it was the music and mood that mattered, not a crowd song-along. 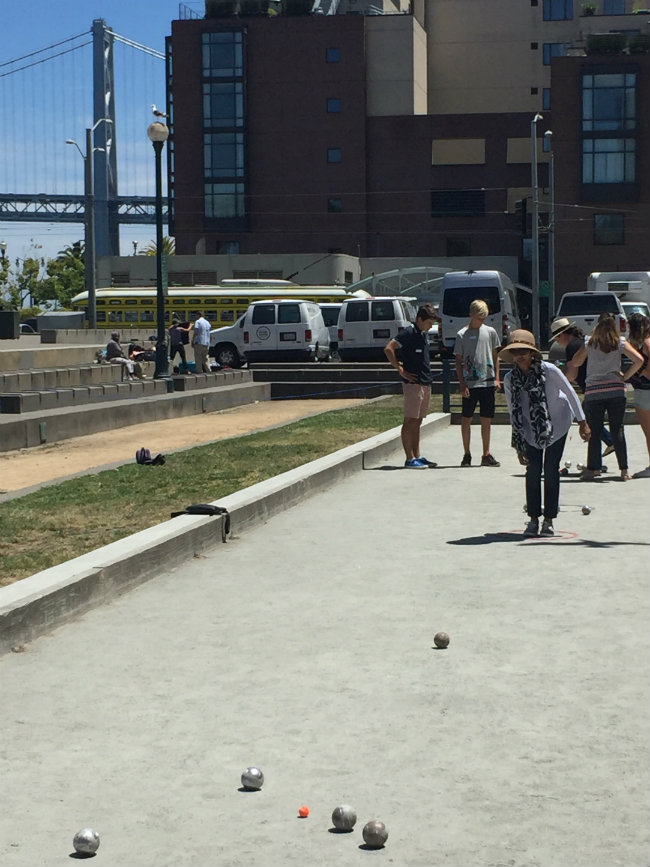 From the 1850s to the early 1900s, Bastille Day was proudly celebrated throughout the U.S., especially in San Francisco. The French found opportunity in the new country, and succeeded in business and pro bono activities. But after WWI, the events took a low-key profile. In the 1930s, a new set of professionals arrived. Lawyers, doctors, contractors and other professionals found success in the Bay Area.

In 1939, on the 150th anniversary of the fall of Bastille Prison, a huge Bastille Day celebration was held on Treasure Island. Organised by Comité Officiel, it included a military parade, a parade with marchers dressed in traditional regional costumes, speeches by the mayor of San Francisco and French community leaders, orchestras playing French and American hymns and regional songs, and a play featuring Washington and Lafayette. There were booths selling French food and wine, along with French products. The day finished with feu d’artifice (fireworks) and a Grand Bal Populaire. The event was supported by hundreds of French and American businesses and organisations.

The Second World War changed the environment again, and it wasn’t until the 1960s that the French community started promoting Bastille Day celebrations. The traditional French quarter that is now around Belden Lane and Grant Street always holds Bastille parties that spill out of restaurants into the street.

This year marked a new phase with the kermesse. Along the Embarcadero, there was no sign of Karl the Fog. It was a rare sunny day along the water, with temperatures pushing the mid-80s. Who knew that the food and drink tables would need afternoon sun shades during San Francisco’s winter?

Basking in the sunshine were food booths offering bread from Boudin Bakery, the original San Francisco sourdough maker; creative French pastries from Mademoiselle Colette; colorful blue, white and red macarons (plus other flavors and colors) from Chantel Guillon; fair trade chocolate from Alter Eco, who worked hard at keeping the chocolate from melting; and French tarts prepared by Ladera Patisserie. There was a bar serving French wine and beer, and Goudy’s French Cuisine was barbecuing charcuterie. 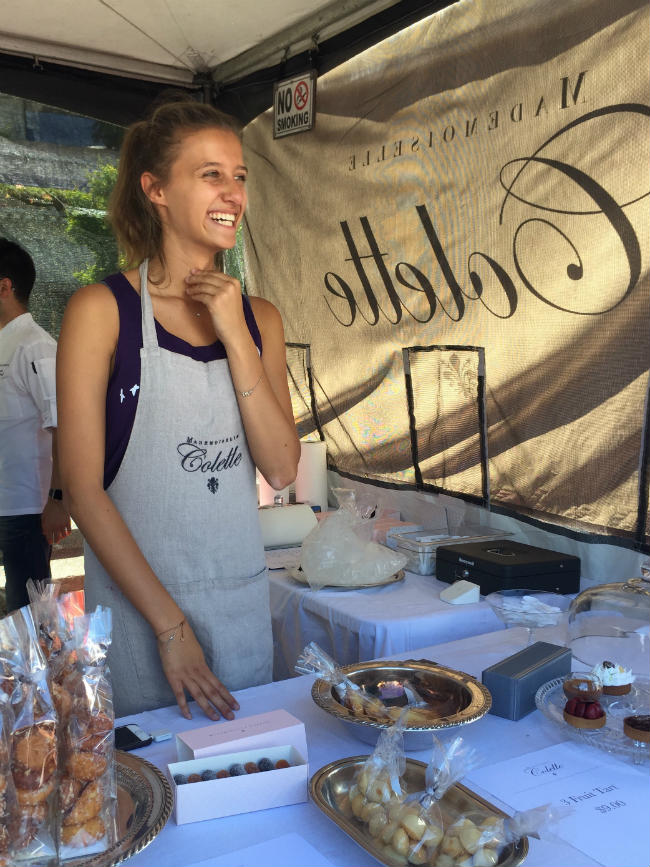 A large booth was hosted by the Bay Area Alliance Francaise organisations, stretching from Silicon Valley, north to Napa and east to Berkeley. They offered information on French language lessons and events, and was a great place to practice the language.

But it wasn’t just about food, language or history. The pétanque courts south of Justin Herman Plaza were full of players and watchers. Car fans were thrilled to see a collection of Citroëns, including popular 2CVs–one red, the other white. 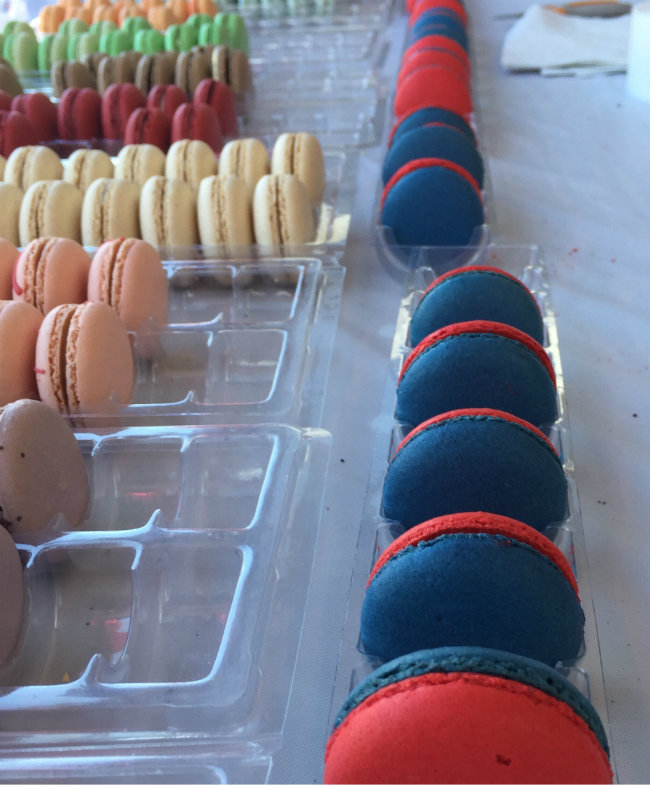 The day ended with a Bal Populaire. In France, these are traditionally hosted by the firemen and women at fire stations. At the kermesse, bands played on square, as the San Francisco Fire Department chose not to participate, although Karl the Fog finally showed up.

“They didn’t understand the tradition because we had no way to show them how this works in France and how successful and special it is,” said Bouchard. “But next year we’ll be much better prepared and we hope to convince them to join us.”

The Bal Populaire is Lebrun-Damiens’ favourite part of the celebration. “Every kid wants to be a fireman,” he said. “The atmosphere (in France) is great, and that is what I miss the most.”

Lebrun-Damiens believes Bastille Day is an opportunity for the French community to show off its history in the city, plus more. “There is a current economic and technology revolution in France, and it has an ambitious agenda that reflects how fast and how big the changes will be with these entrepreneur movements,” he said. “We are positive about being French, and it’s a fabulous moment for our country.”

With a focus on supporting and sharing culture, industry, technology and the two countries mutual history, a growing strength of successful French community events like the kermesse will add to the Bay Area’s culture and continuing success. 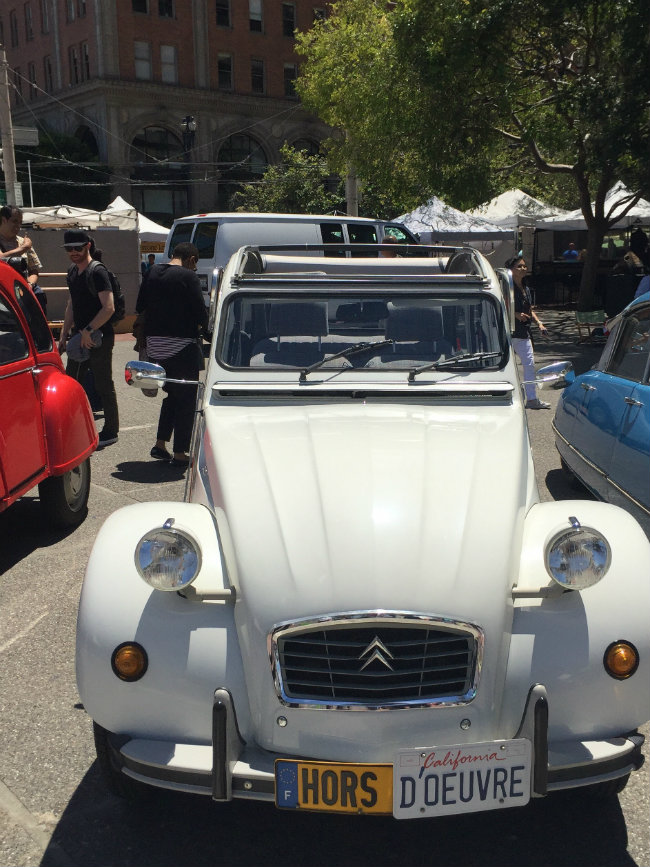