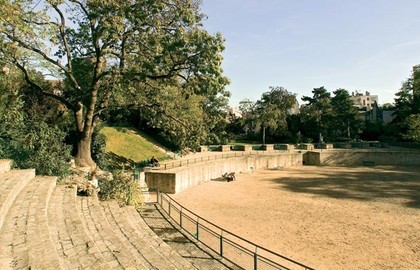 Had Georges Eugène Haussmann not undertaken to tear up chunks of old Paris, much of the city’s very early history would have remained hermetically sealed beneath its medieval layer, forever lost. Only the odd clue or snippet of information about Roman-era Paris had trickled down prior to the 19th century—in Julius Caesar’s Commentaries on the Gallic Wars (52 BC) for a start, where the oppidum of the Parisii—a tribe of Celtic Gauls—on an island of the river Seine (Sequana) is first mentioned. Their settlement was known as Lutetia, or as the French now call it, Lutèce; the name Paris appears for the first time only in the 3rd century AD.

Another half a millennium elapsed before the famous chronicler of the History of the Franks, Gregory of Tours (circa 538-594), reported the discovery, in a Paris gutter, of an ancient bronze serpent and badger, which his contemporaries interpreted as a premonitory sign that the city would be destroyed by fire—an interesting sidelight but revealing little about Lutetia.

The first reference to an urban Roman monument was discovered only in the 12th century: an unsigned document mentions the “great circus” and “immense ruins” of the “arena”, with specific reference to their location “by the church of Saint Victor”. The famous medieval abbey of Saint Victor, a place of great erudition and beauty complete with cascading rivulets and fragrant orchards, was situated around the present Place Jussieu, now home to the ugly asbestos-ridden sprawl of the University of Paris VII. A section of the Roman aqueduct was unearthed in the Latin Quarter in the 16th century, and two ancient cemeteries, in the rues du Faubourg Saint Jacques and Faubourg Saint Marcel, were located in the 17th.

More important was the discovery of the Pillar of the Nautes in 1710, during the construction of a burial vault for the archbishops of Paris beneath the chancel of Notre Dame, on the Ile de la Cité. Made of four superimposed square blocks of stone, the monument measures 5.24m (17 ft) in height and is carved with figures representing both Roman and Celtic deities. The inscription of a double dedication to Emperor Tiberius and Jupiter dates the pillar to between 14 and 37 AD, making it the oldest sculpture dated by an inscription ever found in France. The inscription specifies that the monument was financed by the Nautes, the powerful corporation of boatmen, confirming their leading position in the city’s hierarchy. The dedication to Jupiter led to the conjecture that an earlier pagan temple once stood on the site of Notre Dame. It is now more commonly believed that the pillar was initially erected on the Left Bank and was recycled on the island in the 3rd century, when the city’s center of gravity shifted there in the wake of barbarian assaults. That theory is supported by the fact that other recycled stone from the left bank of Lutetia was found in several places on the island, including the new ramparts, the royal palace (now the site of the Palais de Justice), and the basilica (on the site of today’s Marché aux Fleurs), an administrative and commercial tribunal. (Early Christians later borrowed the term basilica for their churches, which used a similar architectural plan.) The recycling of stone has always been common practice, as exemplified closer to our time by the Pont de la Concorde, a bridge built entirely from the stones of the demolished Bastille fortress-prison.

An even more significant breakthrough in tracing the history of Roman Paris was made in the 19th century by Théodore Vacquer, after Baron Haussmann had torn up the medieval streets for his grand redesign of the city. Vacquer’s studies revealed that Lutetia did not evolve as an extension of the earlier Gallic oppidum but was a carefully planned new town built on the left bank, in the position best suited for the crossing of the Seine via its main island. The choice of a small hill—known as the Montagne Sainte Geneviève since the Middle Ages—spared the inhabitants the capricious floodings of the Seine. As in all Roman towns, the streets of Lutetia were laid out in a grid, with a central north-south axis, the cardo maximus, a street that is still in place today, known as the rue Saint Jacques since the Middle Ages, when it was the route for pilgrims going to St. Jacques de Compostelle (Santiago de Compostela). The cardo spanned the river over a bridge (now le Petit Pont), crossed the island along the present rue de la Cité and joined the trading and communication routes toward the north via the present rue Saint Martin.

To the west, the Boulevard Saint Michel and, further north, the rue de la Harpe have replaced a secondary cardo which continued on the right bank along the rue Saint-Denis. Today’s rue de la Sorbonne was also part of the Roman grid, connecting the north gate of the Forum and the public baths that are now part of the Cluny Museum—the national museum of the Middle Ages, which is housed in a superb 15th-century mansion built atop the baths. East of the rue Saint Jacques, today’s rue Valette is crossed at right angles by the rue des Ecoles and rue Cujas, two of Lutetia’s rare surviving east-west decumani, running parallel to the Seine. Not unlike modern cities, Lutetia also had a diagonal artery, the transversus, an important road that led to Italy via Lyon. You can follow a section of its route along the present rue des Fossés Saint Jacques and rue Lhomond.

The Forum, the civic, economic and religious center of Gallo-Roman life, constituted a vast rectangle built on top of the hill, corresponding roughly to the present rue Soufflot and bounded by the Place Edmond Rostand, rue Saint-Jacques, rue Cujas and the quaint rue Malebranche. The basilica occupied the eastern side of the Forum, and facing it on the western side stood the Temple, surrounded by galleries that sheltered a variety of upmarket shops, with many more lining the neighboring arteries—some 60 in all. No doubt they would have put to shame today’s McDonald’s and its French equivalent, Quick, and the rest of the jumble of junk that now graces the Boulevard Saint Michel.

The Forum’s hill was higher at the time, and much steeper. Taking advantage of this topography, Lutetia’s monuments were positioned mainly on the northern slope that rolled down towards the Seine Valley, displaying their magnificence for all to see and admire from a distance. Surmounting them against the skyline was the red-tiled roof of the Forum—now replaced by the dome of the 18th-century Panthéon.

Lutetia’s aqueduct supplied three public baths. The Forum baths on the site of today’s rue Gay Lussac and those of the Collège de France, across rue Saint Jacques from the Observatory tower of the Sorbonne, were entirely demolished, but the ruins of  the Thermes de Cluny still stand at the corner of Boulevards Saint Michel and Saint Germain, now part of the wonderful Cluny Museum, where the Pillar of the Nautes is also on view.

As many as fifteen shops lined the decumanus of the rue des Ecoles, providing the privileged Naute clientele of the Cluny baths with scents and other such upscale spa products. The theatre was situated on rue Racine, right next to today’s Théâtre de l’Odéon. The Roman “arena” was in fact a multi-purpose amphitheatre offering a mix of pantomime and musical performances, as well as bloody animal and gladiator fights, which possibly accounts for its location in what was then the suburban outskirts of Lutetia. In fact, most of the amphitheater known today as the arènes de Lutèce is a replica that dates to 1915-1916: unbelievable as it may be, most of the original Roman amphitheater that was unearthed in 1867-68, during Haussmann’s renovation, was demolished in 1870 to make room for a city bus depot—although Victor Hugo spared no effort to salvage what he could from the wreckage. The arena is now part of a lovely, hilly little garden that can be entered from the rue de Navarre, although those seeking the magical thrill of leaping back and forth in time should access it through a regular doorway situated at 49 rue Monge.

The Rue St. Nicolas du Chardonnet, one of the narrow Medieval streets near the Pantheon on the Left Bank, in the 1850s. State Library of Victoria

Further vestiges of Lutetia were uncovered in the 1960s when, once more, bits of Paris were stripped open, this time to create parking space for the ever-growing number of cars. A section of one of the Forum walls can be seen in the staircase of the rue Soufflot underground parking lot (entrance near 61 blvd Saint Michel). The 1965 parking lot excavations under the parvis of Notre Dame led to the creation of the Archeological Crypt, where the archeological findings have been preserved and turned into a museum. The Crypt is under the authority of the Carnavalet Museum, the museum of Paris history, which has its own excellent Gallo-Roman collection. Besides information about the construction of the city and its habitat, the exhibits also shed light on its inhabitants’ way of life, their trades and the decoration of the more prosperous homes, samples of which were found notably on rue de l’Abbé de l’Epée.

Gallo-Roman Lutetia was an average-size provincial town in Gaul, stretching over some 115 hectares (284 acres) on its main left bank section, with a population of some 5,000 inhabitants. For the sake of comparison, Reims and Amiens boasted an area of 250 hectares (618 acres) each, and big Roman cities like Lyon (Lugdunum) or Narbonne (Narbo Martius) had populations of more than 50,000. What’s left of Lutetia can easily be covered on foot in an hour or so. As you walk towards the Cluny Museum, heading for the baths like the Gallo-Romans did, take time to enter the little square Paul Painlevé on the corner of rue des Ecoles, where you’ll find a  statue of the she-wolf suckling the twin brothers Romulus and Remus, the legendary founders of Rome. It’s a replica of the one in Rome’s Capitol, a gift from modern-day Rome to Paris in homage to Gallo-Roman Lutetia.

From the France Today magazine archives