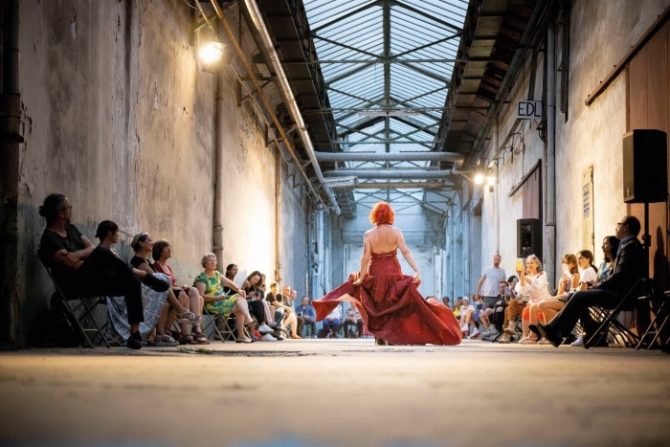 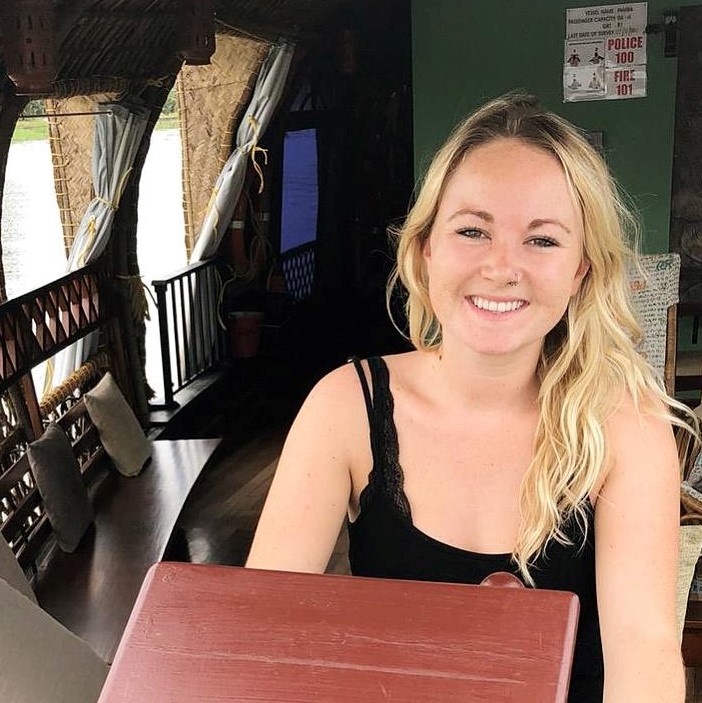 Lyon resident Anna Richards leads us through the city’s traboules to explore the rich and colourful history of its silk industry, which dates back to the 15th century and is today enjoying a very 21st-century renaissance.

In a former Lyonnais factory in Vaulx-en-Velin La Soie, a procession of extravagant outfits worthy of a Jean Paul Gaultier catwalk brightens the industrial concrete setting. A charcoal silk kimono with a cord designed to look like a string of cocoons. A black and white printed dress patterned to look like the punched card used in Jacquard silk-weaving looms. A silvery butterfly emerging from a chrysalis.

The fashion show has been organised by Silk Me Back, a non-profit which began as a cultural exchange to celebrate Japan and France’s shared silk history. After disease wiped out a large portion of France’s silkworm population in the mid-19th century, Japan exported 61% of their silkworm eggs to France to save the industry. Most of the Japanese silkworms were resistant to the ‘European illness’, so the industry was saved. Silk Me Back is paying homage to Japan’s role in saving Lyon’s silk industry and performing the story of the city’s silk history through fashion. It couldn’t have chosen a more appropriate location. 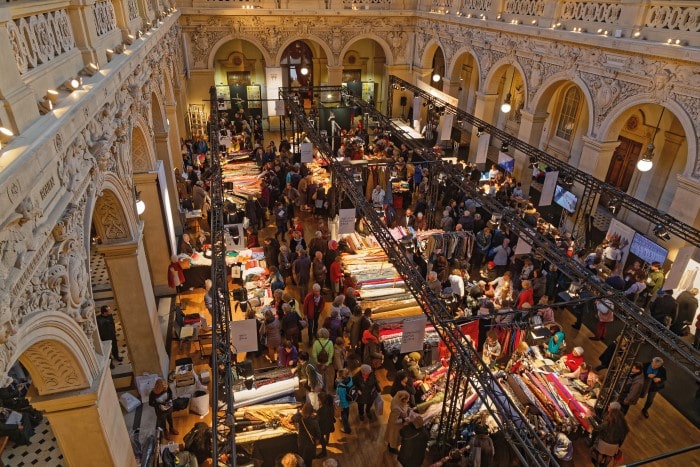 Crowds turn out for the 2019 Silk Festival in Lyon © ALAMY, MICHEL DJAOUI

THE FABRIC OF HISTORY

The factory runway that the models are gracing marks a new chapter in Vaulx-en-Velin’s history. The TASE factory, which ceased operation in 1980, was saved from demolition in 2008 by a group now known as Vive La TASE!, an association dedicated to preserving Lyon’s old factories. The TASE, which opened in 1925 to produce artificial silk, was owned by the Gillet family, Lyonnais silk tycoons who made their fortune by discovering a way to dye silk black without the colour fading. Naturally creamy in colour, dyed silk would rapidly fade as it aged, or when exposed to light. Before François Gillet’s invention, getting silk to retain colour was one of the biggest obstacles in the industry.

“When we first came to see the factory it was full of squatters,” says Jocelyne Beard, president of Vive La TASE!. “It looked awful, semi-derelict, and it was dirty and full of rubbish. But as we looked around, we noticed that there was no mould and that the roof and general structure of the building were sound. It was a fantastic building! We saw that it wasn’t going to cost any more to renovate it than it would to demolish it.”

Vaulx-en-Velin La Soie (literally Vaulx-en-Velin Silk), didn’t exist when the factory was built. To the northeast of Lyon, just south of the River Rhône, the area comprised little more than a farm, a handful of cottages and a hotchpotch of fields. For the Gillet family, it was the perfect location to build a factory: there was plenty of space to build houses for the workers, and the East Lyon railway line ran directly through there via Villeurbanne to the city centre. The essentials (a church and a dispensary) arrived with the factory and the construction of workers’ houses. Now, with the city’s rapid expansion, Vaulxen-Velin La Soie has a metro station, direct trams to Lyon-Saint Exupéry Airport, a shopping centre, offices, and a wealth of restaurants and bars. 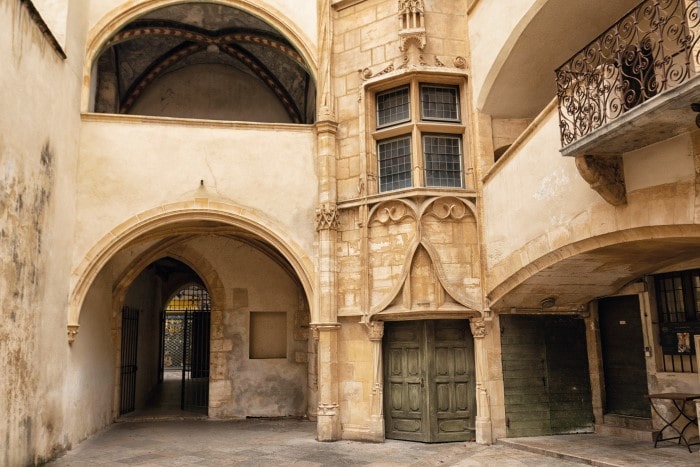 The silk industry really took off in Lyon in 1536, when François I invited two Italian merchants to teach poor, local girls how to weave silk. Silk threads were transported all the way from China and Japan along the ancient Silk Road and upon arrival in Lyon were spun, woven and dyed to clothe the wealthy. It was particularly popular with the French royal family. Louis XVI and Marie Antoinette decked out their wardrobes and much of the soft furnishings of Versailles in sumptuous silks. Until the Revolution, Marie Antoinette was the fashion influencer of the epoch, so the French bourgeoisie followed suit and silk became a symbol of social status. It was very much a luxury item and had at times been as expensive as gold. The colour worn could also indicate a person’s social standing: blue silk, which was particularly difficult to dye and retain colour, was often worn by Louis XVI and Marie Antoinette, and so became associated with nobility. Canuts (silk weavers) spun silk in their ateliers in Croix-Rousse, one of the two major hills which dominate Lyon’s skyline. One such atelier, La Maison des Canuts, has been preserved as a museum and looks much as it would have done in its heyday. The number of ateliers, where the canuts would work their noisy, clacking machines for up to 12 hours a day to meet demand, meant Croix-Rousse became known as the ‘working hill’. The other hill, crowned with the basilica of Fourvière, was known as the ‘praying hill’.

In the 17th and 18th centuries, silk spools were woven laboriously by hand, but the invention of the Jacquard loom by weaver Joseph Marie Jacquard in 1805 transformed the industry. It used a system of threaded needles and punched card to create elaborate embroidery and was operable by hand by a sole canut. Once the silk had been woven, it was transported through the city using narrow, covered passages known as traboules to be sold to soyeux (silk merchants) who would use it to create clothing for the bourgeoisie, which was then shipped all over Europe. To this day, Vieux Lyon is characterised by its many arched traboules. 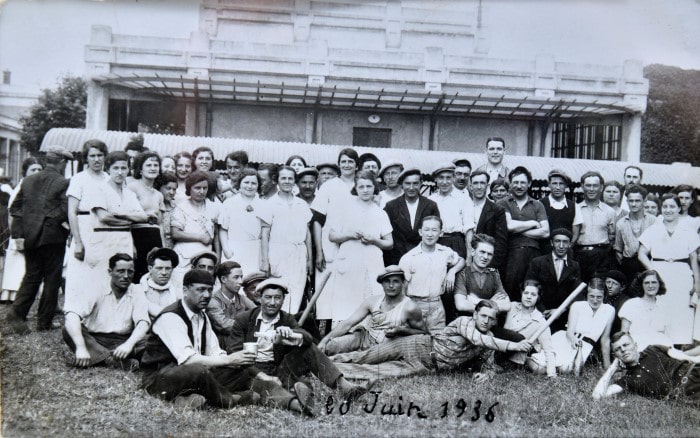 By the mid-19th century, roughly half the population of Lyon worked in the silk industry. In 1831, with merchants paying less and less for silk, the canuts launched their first revolt, resulting in over 600 casualties. A meeting was held between the canuts, the soyeux and government officials, with the promise of standardising the price paid for silk.

Peace was short-lived, however. The price of silk did not remain fixed and in 1834 and 1848, the canuts revolted twice more. Each insurrection incurred numerous casualties, imprisonments and deportations. The third revolt was swiftly followed by a parasitic disease which decimated France’s silkworm population, leading to the import of silk worms from Japan.

All of these factors meant that as the century came to a close, artificial silk was becoming more popular. By the early 20th century, the TASE factory was one of the largest producers of artificial silk. A shortage of local workers meant that the Gillet family conscripted from overseas, and with impending world war and tensions rife, they weren’t short of willing labourers. Many came from Eastern Europe, escaping either the Nazi regime or the Soviet Union; Spaniards fleeing Franco began to seek work across the border; Cambodians in search of higher pay and a better life emigrated to their former protectorate. The village surrounding the TASE factory expanded rapidly from its humble beginnings to become one of the most culturally diverse places to live in the area. 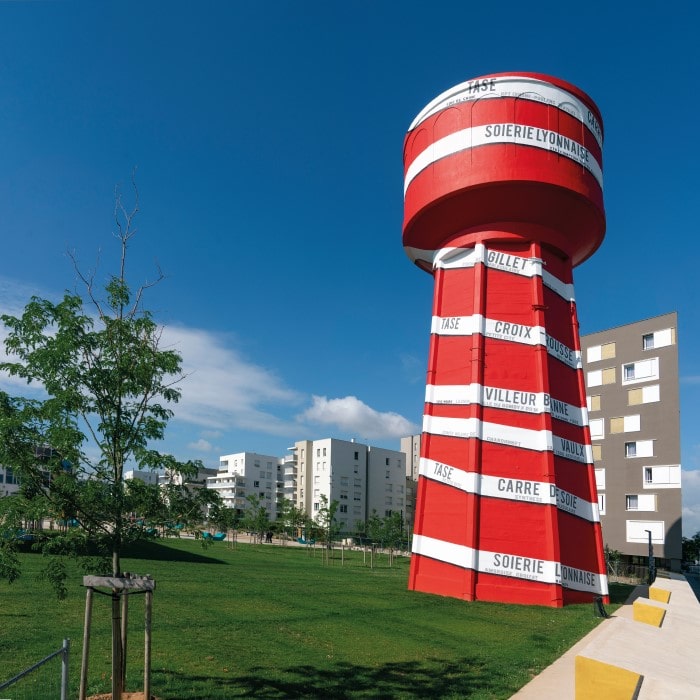 Between the high-rise apartments of modern day Vaulx-en-Velin La Soie, the diagonal streets of wooden shuttered houses built for the factory workers can still be seen, a slice of history not entirely swallowed by modernity. The façade of the Immeuble de Soie (Silk Residence), which housed many of the factory workers, looks much the same as it did in the early 1900s. Inside, however, are office spaces, a bicycle workshop and a gallery space which hosts frequent art installations and fashion shows, all facilitated by Vive la TASE! and linked to the quartier’s history. In Isabelle Moulin’s Silk Me Back fashion show, the old was interspersed with the new: one woman showcased a wooden pallet of colourful silk spools to symbolise fabric dyeing, whilst later a young woman sped down the factory runway on light-up roller skates, wearing a Jacquard print silk skirt. The exhibition currently displayed in the warehouse is by Julien Morel, a local painter from Saint-Étienne who specialises in abstract works depicting industrial wastelands.

Lyon’s new silk revolution is gathering momentum. La Maison des Canuts in Croix-Rousse was the first place to market Lyon’s silk heritage to tourists when it opened as a museum in the 1970s. Along with guided visits and talks, they offer demonstrations on how to work a Jacquard loom. The Festival de la Soie is in its third consecutive year at the Palais de la Bourse, the former silk-brokers’ exchange. The festival celebrates Lyon’s heritage with hands-on workshops, exhibitions, fashion shows and artistic performances. In the grounds of the TASE factory, now a park equipped with trampolines, swings and slides, the old water tower has been painted by local artistic cooperation CitéCréation to symbolise a silk bobbin, scarlet against the white of the factory and neighbouring offices and apartments. CitéCréation paints murals and street art of the city’s history, and La Bobine de Soie has been threaded with ribbons of white, each one with the name of a factory or family influential in the silk industry. Naturally, the name Gillet is prominent.

To wander the winding traboules of Vieux Lyon, to press your nose against the vast windows of the former ateliers of Croix-Rousse or traverse the criss-crossing streets of former workers’ homes in Vaulx-en-Velin La Soie is to journey through the city’s rich industrial history. It’s not hard to imagine the city as it was at the start of the 1800s, awash with colour, commerce and the noise of canuts at work. Once the epicentre of Europe’s silk industry at the very end of the Silk Road, Lyon’s heritage is making a comeback.

Lead photo credit : Isabelle Moulin’s Silk Me Back fashion show. © SILK ME BACK

Anna is a travel and outdoor writer living in Lyon. Her work has been featured in The Telegraph, The Independent, SUITCASE, and many others.