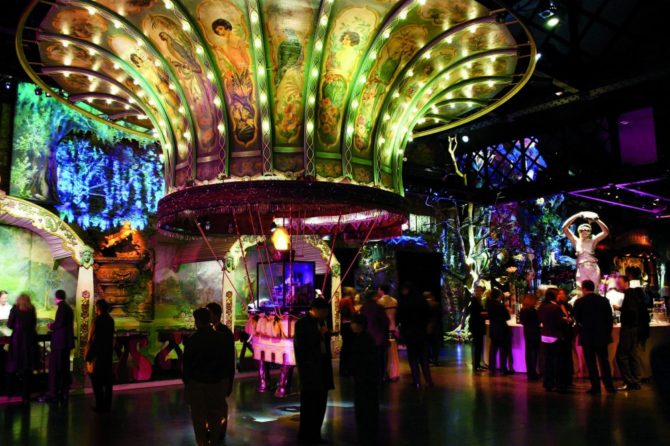 A magical Paris museum that’s normally only open for groups and special events will be opening its doors to the general public during the holiday season this year. The Musée des Arts Forains, a wonderland of vintage carousels, carnival rides and games, grew out of the passion of its founder, Jean-Paul Favand, who has amassed one of Europe’s largest private collections of carnival art and theatrical objects dating from 1850 to 1930. In 1996 it became the Musée des Arts Forains, and is now installed in the picturesque former wine warehouse district of Bercy.

And although it’s called a museum, these treasures are not enclosed in glass cases—meticulously restored, they come to brilliant, boisterous life as visitors ride on the carousels and try out the other attractions that once filled the fêtes foraines.

These traveling shows, based not only in France but also in England, Belgium and Germany, began during the Industrial Revolution and had their heyday during the 1900s, touring all over Europe—the largest of them traveled in 20 railroad cars. The fêtes announced their presence with advertising posters and parades, and set up impressive facades adorned with monumental statues—examples in the museum include a 13-foot tall Joan of Arc. The facade was the gateway to a world of wonders: a colorful circus tent, a carousel, thrilling rides that might include the montagnes russes (roller coaster), a dance hall whose music spilled into the midway, games of chance, skill and strength, bars and shops selling cotton candy, gingerbread, candied apples—all accompanied by the music of the barrel organ and the shouting of carnival barkers.

The vintage carousels include some unusual models—one has velocipedes instead of horses, and another has Venetian-inspired parade floats. And the museum has recently added to its collection of theatrical costumes—sequined gowns, feather boas, rhinestone headdresses, ostrich-plume fans, crinolines and frilly underthings from the cancan—all are on show during the holidays, celebrating the art of the music hall.

There are shows every half-hour, live and digital shows as well as demonstrations of automatons and a “Cyber-Circus”, a virtual circus projected in 3D with special effects and “stupefying creatures”. It’s a great opportunity to visit this enchanting, little-known museum.