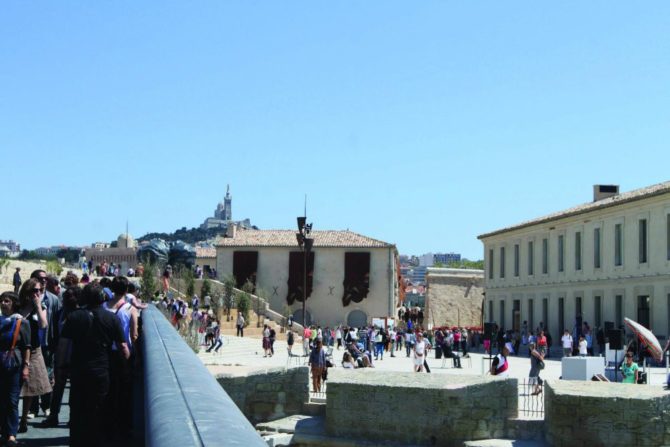 Both the main French portal to the Mediterranean and the second largest city in France, Marseille is also an epic, complex, and shape-shifting stage for the convergence of colliding cultures. Thirteen years ago the idea was thrown on the table to create a space to showcase, highlight and foster the cultural exchange of the Med and Marseille was a natural choice as its symbolic location.

With the designation of Marseille Provence as European Capital of Culture, a wave of investment swept through the region, both refurbishing the old museums and public spaces and building exciting new ones like the FRAC PACA, which is dedicated to contemporary Mediterranean art, or the reinvigorated Palais Longchamps. The most talked about and perhaps most controversial, however, was the Museum of European and Mediterranean Civilizations, or MuCEM, which opened last June.

Conceived as a meeting place for heritage, art and ideas, the new MuCEM is a symphony in three movements: the J4 and the Fort St-Jean, designed by architect Rudy Ricciotti, and the Centre for Conservation and Resources (CCR) by Corinne Vezonni. The J4 is a brand new contemporary structure on the site of the pier where travellers from around the world came and went until decolonisation, and St-Jean is an extensive refurbishment of a 12th Century military fortification.

The webbed exterior and dyed-concrete pattern of the new building stands as an art installation in itself, and the imposing presence of the Fort St-Jean offers a visual contrast of the old and new. The polished slick lines of the contemporary building do not compete with the stark old stone of the fort. Once inside, the fort offers a surprising maze of restful terraces with sitting areas to pause and soak in the Mediterranean light as your eyes wander across the sparkling sea.

One of the many challenges that the project presented was how to find a way to connect the old part with the new, and how to join the two structures. A suspended footbridge was an inspired idea, with visitors walking from one to the other and making a physical transition between old and new, wind and sea, light and shadow.

This is a place for blasts of azure and magenta; there is no place for grey. The collections and programme of exhibitions and events are as eclectic as Marseille itself, and visitors can retrace the extraordinary cultural, social, scientific and political expansion of the Mediterranean world from prehistory to the present day. That it appears confusing at first, forms a large part of its mesmerising appeal to a broad and diverse audience.