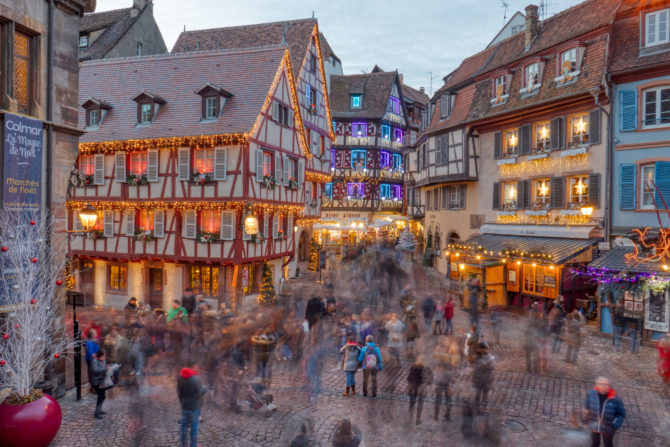 France’s festive season kicks off on November 25, Saint Catherine’s Day, and runs through the four weeks of Advent up to Christmas, then all the way to Epiphany on January 6. The festivities revolve around hundreds of Christmas markets dotted all around the country, each seemingly more charming than the next, which are complemented by a host of concerts, festivals and special events.

Feast for the Senses

Of all the senses, smell and taste have the most direct connection to memory. A study has found that when we smell or taste something during an emotional experience, the odour or flavour and the resulting emotion are stored in the same part of the brain, meaning that retrieving one also triggers the other, leading to a Proustian rush.

Travelling in France during the festive period means experiencing a beguiling mix of flavours, scents and sounds which, in our memories, will remain forever linked to this most magical time of the year. Since absence makes the heart grow even fonder, we asked two renowned French expats living in New York to share their memories and reveal what they miss the most about the festive season. 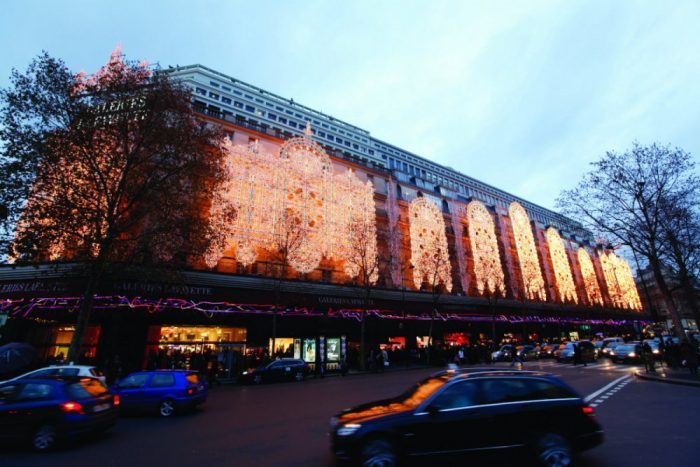 Serge Devesa, the Executive Chef at the InterContinental New York Barclay hotel in Manhattan, was recently inducted into the highest recognition in the profession, the Maîtres Cuisiniers de France (Master Chefs of France). Childhood memories take Serge back to his native Provence.

“What I miss most are the big family meals,” he says. “In my home there were at least 20 of us at the table. This included three sisters and a brother, grandmother, aunts, the dog, you name it. Then as we grew up our boyfriends and girlfriends joined us, they became fiancées, then wives and husbands. Next came the little children, who took our place in the eager awaiting of the gifts. I remember that there was time, school was out and there was no rush.

“The meal started with several different amuse gueules, then several courses including a big turkey. For my mother it was very important to have the treize desserts, the 13 dishes typical of Christmas in Provence, a reference to Jesus and his 12 disciples. These include almonds, dates, nougats and my favourite was always de bûche de Noël (Yule log) and the pompe a l’huile (oil pump), a sort of brioche made with olive oil and flavoured with hints of orange blossom and aniseed.

“Lunch would stretch till five in the afternoon. Now that we are spread out around the world, I can’t remember the last time when all of my brothers and sisters were sitting together at the table. It’s one of the things I remember most fondly about Christmas in France – the family around the big table.”

Christmas in Provence would not be the same without the crèches (nativity scenes) populated with santons (figurines), which are displayed in many of the region’s churches and homes. In Marseille, the Foire aux Santons has been one the most popular seasonal events for 200 years, its stalls feature hundreds of different nativity figurines, plus handmade ornaments, gifts and antiques.

Sublime shop windows, exquisite décor and sumptuous delicacies are par for the course in Paris. However, their visual impact reaches its summit during the holidays, when the Champs-Élysées and the city’s iconic department stores, Galeries Lafayette and Printemps, compete to mount the most spectacular festive illuminations.

Mireille Guiliano, an author whose new book is entitled French Women Don’t Get Facelifts: The Secret of Aging with Style & Attitude, sometimes spent Christmas in her native Eastern France, but mostly in Paris.

“Foods from my childhood and adolescence live in my imagination and are what I both miss and remember the most,” she says. “Often these are connected with the powerful table traditions and rituals which say ‘France’ to me. The food that comes to mind is not the main course, but the appetisers and desserts – they trigger my taste and longing. What was served in-between was less important, as room needed to be left for the final treats and courses. My Mother’s philosophy was not to leave the table overstuffed.

“I moderated my intake of the main course, which usually was a stuffed bird. We always started, though, with oysters or plateau de fruits de mer and foie gras on airy brioche toasts. All of this was washed down with vintage Champagne, my Mother’s favourite wine. Desserts were multiple miniature courses – from simple warm chestnuts and yummy chestnut purée concoctions to Yule log with praline and dark chocolate, and the treize desserts of Provence with almond paste calissons, my all-time sweet-tooth favourite. Clémentines, dried apricots and figs, and a basket of fresh walnuts were an equally delicious end to it all.

“The accompanying traditions always met three criteria: music, singing and guests, particularly friends who had no place to go or family. And, of course, it was around the table that the guests met. While there was holiday music at home, the singing was mostly at church. Although raised Protestant, my strongest memories are from the Catholic churches, such as Saint-Germain-des-Prés or Eglise Saint-Sulpice in Paris, where the audience participation by locals and many visiting from around the world was utterly moving.

“Of Christmas in Provence, I can still feel the spirituality of the tiny church with superb stained glass windows in Les Baux-de-Provence or the monks of l’Abbaye de Sénanque near Gordes delivering a Latin mass. These stay with me and are replayed in my soul each Christmas.” 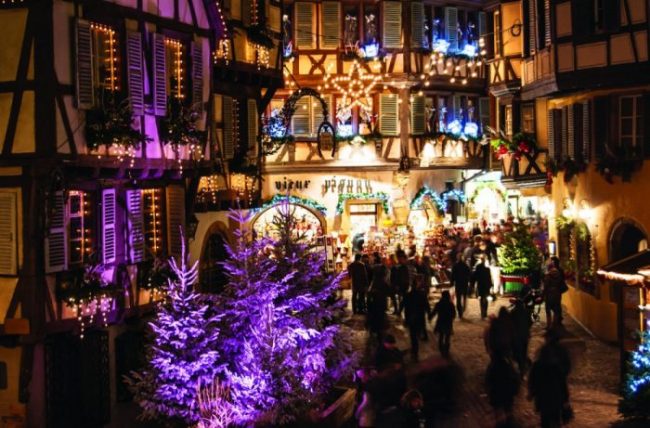 An enchanted atmosphere of myth, flavour and music permeates Alsace, the emblematic region of Christmas folklore. Alsace’s history is closely-interwoven with Germany, which has pulled through some of the same traditions of the Anglo-Saxon Christmas, including the decorated tree or sapin de Noël. This first appeared in Alsace during the 14th century, decorated with apples, paper flowers and ribbons, and was introduced to France in 1837.

Baking takes centre stage in Alsace at Christmas – the emblematic bûche de Noël and countless varieties of Wihnachts Bredele cookies are washed down with vin chaud. Youngsters should behave properly, though, or they may meet Le Père Fouettard, an assistant to Santa Claus with a sinister face and dark robes who whips naughty children!

On a more congenial note, Epiphany on January 6 marks the visit of the three Magi to the baby Jesus, and there’s a charming Alsacien legend which explains the particular ‘domed ring’ shape of the traditional Kugelhopf cake eaten on this day. Legend has it that the sweet treat was first baked by the ‘three wise men’, to thank a baker named Kugel for his hospitality, and it was moulded in the shape of their turbans, hence the name ‘Kugel head’.

Another treat for Epiphany, one eaten all over France, is La galette des Rois (The Cake of Kings) a round puff of pastry, filled with frangipan filling. Whomever finds the fève (bean) traditionally hidden inside is named King or Queen, dons a paper crown and chooses a partner to share their throne. 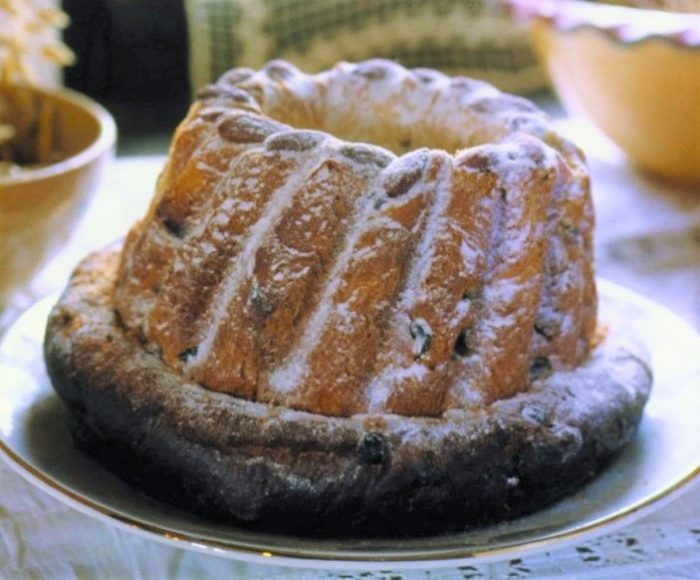 The culinary highpoint of the festive calendar is dinner on Réveillon de la Saint-Sylvestre (Saint Sylvestre’s Eve), and physical fortitude is required to attend this culinary equivalent of a pentathlon. The strategy is to pace yourself – the banquet often features such dishes as oysters, goose, capon and pheasant, so it is easy to get carried away and simply dive in. Should you make this novice’s error, by the time that you are thinking, “holy macaron, what a brilliant dinner”, the panic will set in when you discover that you have only just made it through the third course… of seven. Every time you empty your glass it is invariably going to be refilled with something irresistible, until you are hit by the great baseball bat in the back of the head, in the form of the locally-distilled eau de vie (water of life). Ironically, in its original form, the word réveillon meant ‘awakening’.

2-to-3 cups vegetable stock (beef stock is fine, too)

1. Put the peeled chestnuts in a saucepan with 2 cups of stock. Bring to a simmer, uncovered, and cook for 45 minutes, adding more stock if necessary to keep the chestnuts covered.

2. When the chestnuts are tender, drain, reserving the stock. Purée the chestnuts in a food processor or blender. Return the puréed chestnuts to the reserved stock, stirring, and add the heavy cream and cook a few more minutes till hot. Season to taste.

3. Serve in individual bowls and add a dollop of crème frâiche or sour cream in the middle. Grate dark chocolate on top or dust with cocoa powder.

NOTE: The bulk of the work, steps 1 and 2, can be completed the day before, then reheated. 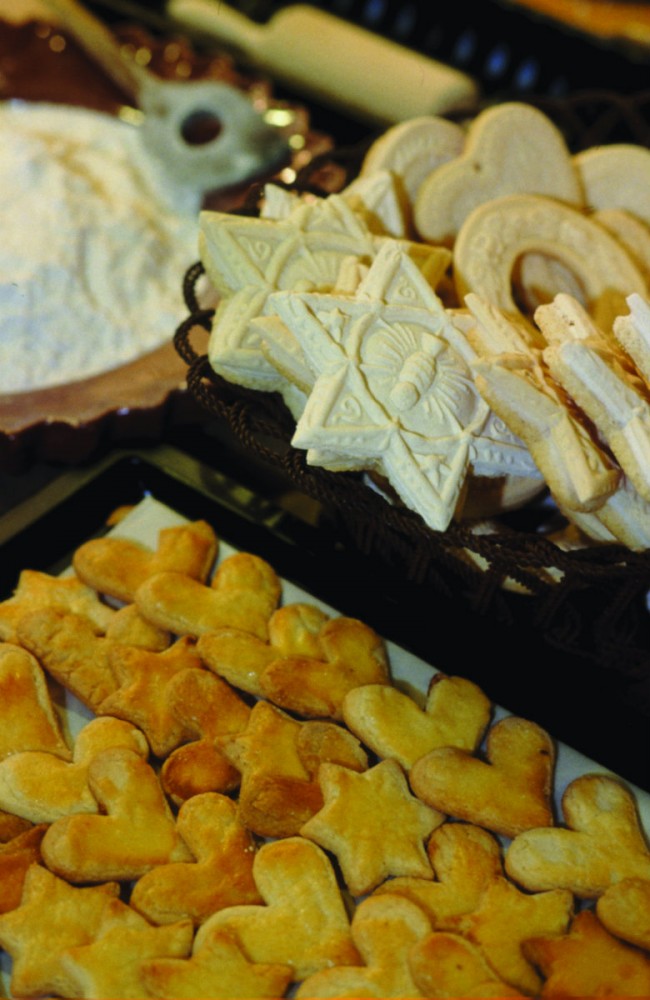