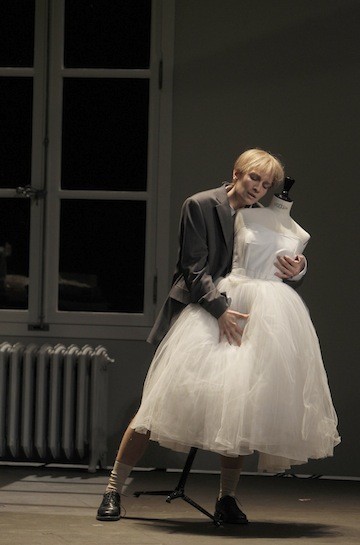 Not even a scattering of raindrops could dampen the fun as an effervescent production of Mozart’s The Marriage of Figaro, performed in the 17th-century Episcopal Palace courtyard, launched the 64th annual Festival d’Aix-en-Provence last night. Director Richard Brunel has updated the 18th-century château setting to a modern-day courthouse and law offices, with Count Almaviva as the top judge; the transposition gets a little lost as the scene shifts through an open door to the home of the Count and Countess—does the Countess live in the courthouse?

But the slight confusion hardly matters in the light-hearted, fast-paced merriment, as the Count pursues Suzanna on her wedding day and her husband-to-be Figaro concocts his delightful revenge, the Countess yearns for happy days past and the adolescent Cherubino pines for every female he encounters. The only notable flaw is in the somber costumes—men in suits, and women too, all in shades of gray, with splashes of black and white. Even the Count’s hunting dog—who makes an unexpected and very funny appearance—is gray. It’s an odd choice for such an otherwise exuberant staging. But at least there’s an enormous and very frothy white wedding veil, in which every member of the cast seems to get wrapped up at least once.

The first of the famous trio of Mozart operas written with librettist Lorenzo da Ponte, the 1786 Marriage of Figaro is one of the most beloved and often-performed works in all opera, with good reason—it’s a tightly constructed tale with a Shakespearean-comedy plot, accompanied by a seemingly endless stream of Mozart’s greatest hits. It’s hard to miss with it, and almost equally hard to live up to audience expectations, but the cast here delivers with top-notch zest.

French soprano Patricia Petibon, with an endearing mop of flame-red hair, takes top honors, singing a gorgeously sweet and strong Suzanna while cavorting like a musical comedienne. American bass-baritone Kyle Ketelsen, who made a terrific Aix debut as Leporello in the 2010 Don Giovanni, is an ideal Figaro, his deep, dark voice abetted by an easygoing, natural comic charm. American mezzo-soprano Kate Lindsey nearly stole the opening-night show from time to time as a skinny, lustful nerd of a Cherubino, making even the recital-staple aria Voi Che Sapete sound a little new and different. Paolo Zsot, the Brazilian baritone well known to New York audiences as Emile de Becque in the 2008 revival of South Pacific at Lincoln Center Theater, is suitably pompous and engagingly repentant as Almaviva. Young Norweigian soprano Mari Eriksmoen, a member of the Festival’s European Academy of Music, has one brief but shining moment as Barbarina. Only Swedish soprano Malin Byström, as the Contessa, seemed a little unsteady, especially in the first act, but she too warmed up by the very happy ending.

Next up: Maurice Ravel’s L’Enfant et les Sortilèges (The Child and the Magic Spells)