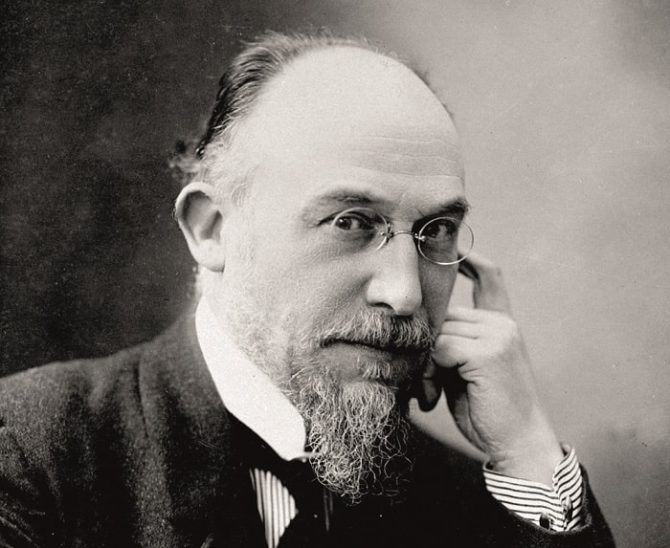 Lambasted by some and lauded by others, Satie’s work (and outlandish behaviour) divided public opinion.

A “phonometrographer”. That’s how Erik Satie described himself – not as a musician, but as someone who measures sound. Perhaps he took to heart the early (and spectacularly harsh) criticisms from teachers at the Conservatoire de Paris, who dismissed him as “lazy” and “untalented”… or perhaps this was a sarcastic jab; another in an infamously long list of quirks. For Satie was, above all else, a character. Allegedly, he only ate white foods, from eggs and rice to mouldy fruit and animal fat. In later years, he was nicknamed “The Velvet Gentleman” for his exclusive wardrobe of grey velvet suits.

After passing in 1925, his apartment was revealed to be a squalid madhouse of incomplete manuscripts, stacked pianos and umbrellas. A character indeed. His compositions were equally eccentric. ‘Vexations’, fuelled by heartbreak, was written to be played 840 times in a row. But there’s also profound beauty and sadness in Satie’s work. Just listen to the ‘Gnossiennes’ and ‘Gymnopédies’ for a glimpse into the deep soul behind the sound.

DEBUSSY: Satie’s peer and friend, and one of France’s most famous composers. Greatest Hits. Sony Classical