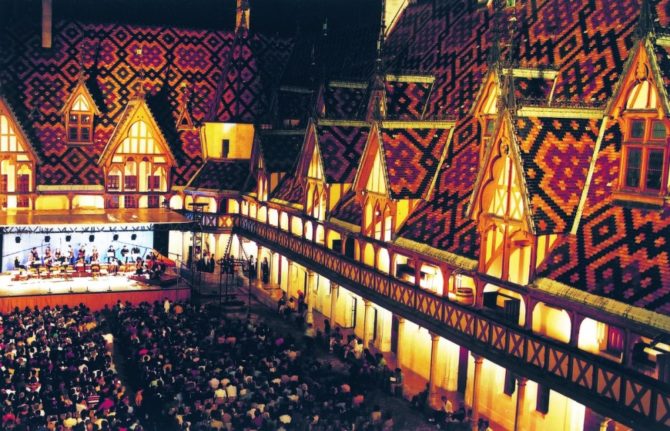 Among the most prestigious music festivals in Europe, in one of its most beautiful cities, with several venues including the 17th/18th-century Episcopal Palace courtyard. This year the Festival will celebrate the anniversaries of four major musicians, Verdi and Wagner, Britten and Poulenc. Most importantly, it will also bring its own specific contribution to Marseille-Provence 2013, the European Capital of Culture project. The 2013 program offers Mozart’s Don Giovanni as Dmitri Therniakov duly revisits the myth and makes the seducer of Seville a ‘man without qualities’, at the Grand Théâtre de Provence, Patrice Chéreau and Esa-Pekka Salonen will revisit Strauss’s Elektra, while the Archevêché theatre, Robert Carsen and Gianandrea Noseda will offer their very personal interpretation of Verdi’s Rigoletto. July 4–27. www.festival-aix.com

Presented in 20 heritage sites throughout the city, with nightly opening-week projections outdoors in the ancient Roman theater, this year’s festival offers 60 different exhibitions and 50 workshops. The 2013 edition is dedicated to the black and white aesthetic form and includes works by renowned artists that have never been shown until now, along with treasures from the past. Many of these exhibitions are genuine events, in the form of conceptual installations, albums, classic prints and a few exceptions in colour. July 1–Sept 22. www.rencontres-arles.com

The 67th annual theater festival in Avignon, a thriving modern city within its intact medieval walls, offers international (but mostly in French) comedy, drama, music and dance, from the main outdoor stage in the Papal Palace courtyard to street corners at every turn. A few gems on the packed 2013 playbill: Ludovic Lagarde’s Lear is in Town, translation and adaptation by Frédéric Boyer and Olivier Cadiot for King Lear by William Shakespeare, and Nicolas Stemann’s Faust I+II on the text by Johann Wolfgang von Goethe. July 5–26. www.festival-avignon.com

In the lovely walled city flanked by Burgundy’s greatest vineyards, four weekends of 17th- and 18th-century music, in the courtyard of the 15th-century Hospices de Beaune or in the 12th/14th-century Notre Dame basilica. In this 31st edition the original version of Gluck’s Orpheus and Euridice, Bach’s Passion according to St Jean and Vivaldi’s l’Incoronazione di Dario . July 5–28. www.festivalbeaune.com

In a big outdoor arena against the background of the ancient Roman theater wall, the oldest festival in France – the first to have revived the tradition of the open-air spectacle. In 2013 it pays homage to Wagner and Verdi. Performances of opera and classical recitals are presented in the ancient Roman theatre,  a semi-circular auditorium which seats 9,000. July 11–August 6  www.choregies.asso.fr

Originally published in the June 2012 issue of France Today, updated in May 2013