My Life in Paris: Room with a View (of a Voisin Nu) 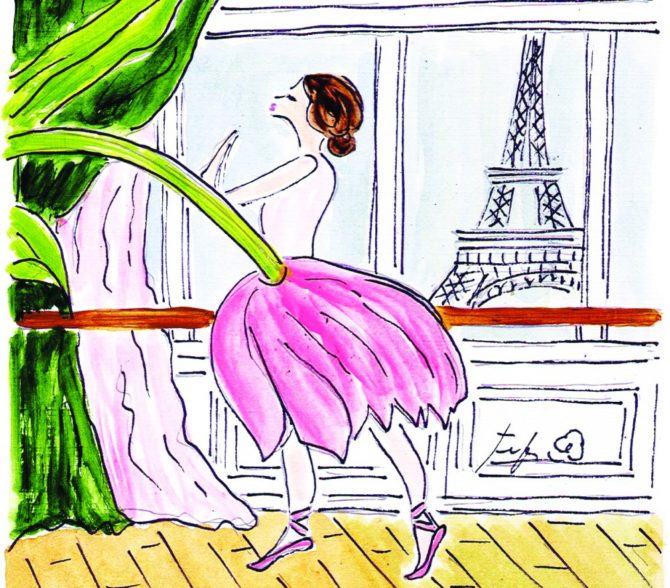 The stark-naked man makes his appearance sometime between the presentation of the plat de fromage and the first nibble of plump rounded macarons which are glistening with a dollop of tea-infused fondant cream in the middle.

Eleven friends are gathered cheek by jowl around my petite, second-hand bistro table, which is neatly butted up against one of my studio windows. Meanwhile, directly across the cobblestoned passage, in his own little flat, my under-dressed neighbour is thoroughly enjoying a pizza, apparently unaware of our gaze. The distance between our two windows is close enough to tell that it’s topped with ham, mushrooms, peppers, crème fraîche and an egg.

As I refill everyone’s glasses with more white wine (to the rim this time, it’s getting late) our ravenous homme nu is already on his third slice, illuminated only by the bright light beaming up from his wide-open refrigerator. With the grace and focus of a gravity-defying Cirque du Soleil performer, he skillfully juggles the gigantic pizzeria box, the fast-moving slices and a bottle of beer. My friends are mesmerized by the unfolding tableau.

“Fantastique!” my pal George cries out, with his nose pressed up against the windowpane. “Exquisite form. Beautiful curves. Check out that orange SMEG refrigerator!” We all sigh in unison. With bated breath and self-discipline crumbling, I spit out, “I want one in blue.” Roger concurs. However, our young beer aficionado friend Yohan is more impressed with the neighbour’s beverage choice. “Excellent taste!” this budding brew wizard says, before adding, without missing a beat, “Saint-Lamvinus by Cantillon is a blend of Lambics with Merlot and Cabernet-Franc grapes. Personally, I’d pair its earthy tannins and fruity aromas with a saucisson sec or an old jambon Sérrano. I’ll provide bottles at our next dinner party.”

A cheer erupts around the table, which finally catches the eye of our rear window-dweller, who’s now preparing his bottle and box for the recycling container. Are there any limits to his greatness? Appreciative of the late night inspiration he’s provided, we raise our glasses and salute him with pure glee. Acknowledging the attention and the compliment in turn, our courageous and courteous showman, still very much in the buff, waves broadly before taking a deep bow. Sadly, the next day he installs curtains.

Ah, the windows of Paris. With its intimate outlooks, Paris has always inspired writers and artists. Often it was their very own ‘room with a view’ that spurred them on to dizzying heights. Searching for ecstasy, Henri Matisse repeatedly painted his view of Notre Dame, which launched a lifetime ritual of painting the views from nearly every place he worked, often including the windows themselves, as if they were the frame.

Through other Parisian windows, the white domes of Sacré Coeur played muse to Pablo Picasso and Georges Braque. Like so many others, both felt driven to paint the Neo-Byzantine stunner’s towers and turrets crowning Montmartre. While Braque lived at 48 rue d’Orsel, and Picasso resided at 11 boulevard de Clichy (with a monkey named Mamina), their friendship bonded as their portraits and landscapes fragmented. Cubism took flight.

One day, feeling brazen, Braque asked the owner of his building on Rue d’Orsel to post a sign stating that there were “Cubists on every floor”. Now it’s ice cubes, in fancy SMEG refrigerators!

In 2003, Theadora Brack moved to Montmartre to write for the travel site Eurocheapo.com. She runs her own blog, a field guide to Paris: www.peopleplacesandbling.com