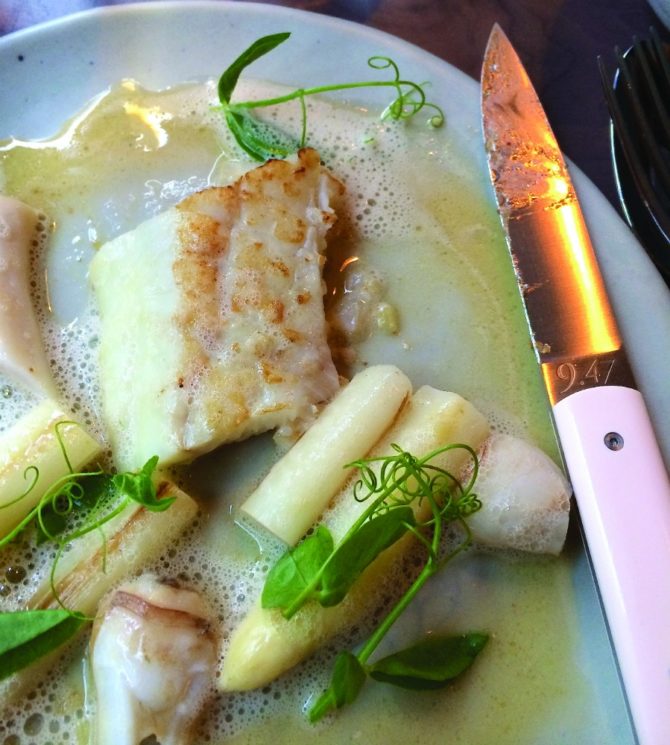 The first time I ever went to the Clown Bar, it was for a quick bite before a fashion show at the Cirque d’Hiver (Winter Circus), a covered arena that was built in 1852 and which adds an unexpected note of elegance and whimsy to the cityscape of eastern Paris with its cream-coloured walls and Wedgwood-like neo-classical frieze on a Bordeaux background.

At the time, this charming little place was more of a wine bar than anything else, although you could always get a good steak and a couple of different hot daily specials, along with charcuterie, cheese and salads.

Beyond anything comestible, the pleasure of this place was it mirthful décor of hand-painted Sarreguemines tiles depicting a jolly march of clowns, its big zinc bar,  and the beautiful glass cupola ceiling over the bar area.

I remained an occasional regular through several changes of management over the course of many years, but doubtless because prices kept rising in inverse relation to the quality of what was being cooked and served, this address finally fell off my radar.

Now, though, the circus is back in town, as it were, since the Clown Bar recently reopened under new management, an experienced team of chefs and restaurant managers including Sven Chartier and Ewen Lemoigne from the restaurant Saturne, along with Xavier Lacaud. They shrewdly recruited talented Japanese chef Sota Atsumi, who’d most recently been cooking at Vivant Table, a deservedly lauded place with another one of the most beautiful décors of Belle Époque tiles in Paris, before it was sold by the ever restless restaurateur Pierre Jancou.

Arriving, I discovered that the dining room here has been artfully renovated. The previous sepia-tone tint of the walls, created by years of Gauloise and Gitanes smoke, has been delicately removed, the handsome Belle Époque stencilled tile floors cleaned and repaired, and the dining room furnished with sleek modern tables that include a drawer in which the silverware is discretely tucked away.

A spacious terrace has also been set up outside, a welcome feature during the warm weather, since it’s set back from a street with very little traffic, making it a fine choice for an al fresco feed.

The new menu is organized as a succession of small plates that are vaguely grouped together as hors d’oeuvres, starters and mains, but which can be mixed and matched as one pleases. Atsumi revises it constantly, but his style parses out from canny contemporary riffs on great Gallic produce – Camembert croquettes in an airy tempura-like batter, simple but sophisticated dishes that emphasise the excellence of the produce he works with through shrewd garnishes, for example, raw bonito in a nostril-clearing horseradish foam.

The other excellent dishes the night I last dined here included grilled langoustines, gnocci in hazelnut butter, turbot with razor-shell clam, white asparagus and rhubarb in salted butter, and a superbly well-made pithiviers de canard (ground duck in a dome of golden pastry with a jus de canard). The desserts, including a pignoli (pine nut) tart with buckwheat-boosted pastry cream, are also excellent.

The only reservations I have about this charming place with very good food run to the friendly but uneven service and a rather officiously all ‘naturel’ wine list. ‘Natural’ wines, or those with no added sulphur, have been the rage among younger sommeliers in Paris for a long time now, and from my point of view, the trend has evolved in a sharp-elbowed manifesto that deserves a serious rethink.