Check out Rachel Cobb’s Gorgeous Photos in “Mistral, the Legendary Wind of Provence” 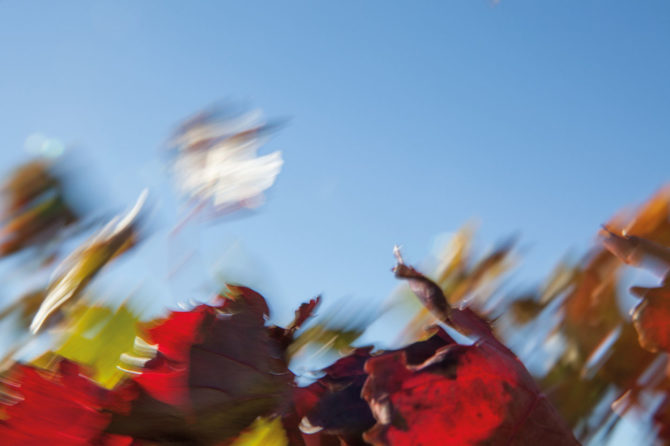 There is something mythical about the mistral wind– the strong, northwesterly blast that funnels down the Rhône Valley and sweeps across southern France. It creates the climate, and it’s part of Provençal culture. Renowned authors like Émile Zola and Jean Giono wrote of it in their works. And it’s exactly this subject that photographer Rachel Cobb has spent the last two decades capturing in images. 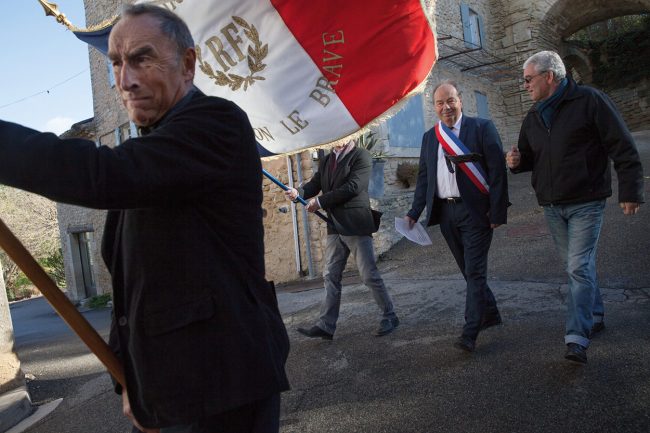 At an Armistice Day commemoration, Michelle Bridelance struggles to hold a flag in a mistral as he, Pascal Bulte, and the mayor of Crillon, Guy Girard, process to the cemetery. 11 November 2016, Crillon-le-Brave, France. Photo: Rachel Cobb

“I first stepped foot in Provence at age 13, before Peter Mayle put the region on the international map. Back then, the village we visited regularly did not even have street lights or a bakery. On nights when the mistral blew, I would lie awake and listen to it howl down the chimney, making the flue bang in fits and starts. Everybody else complained about it, but I loved it. Many people associate the sound of cicadas in the heat with Provence, but for me it’s the wind. The way it sounds, the way it makes everything come alive and dance — trees, flowers, scarves. The mistral is like an invisible spirit moving over the region’s rugged beauty.” — Rachel Cobb 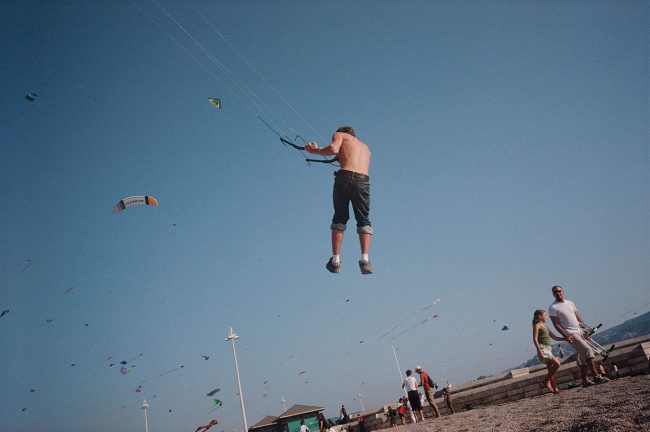 At the Fête du Vent (Festival of Wind) on Prado Beach in Marseille, the wind is strong enough to life this man off the beach. 14 September 2002, Marseille, France. Photo: Rachel Cobb

One hundred images from this long-term project documenting the “devil mistral” were published last fall in Cobb’s Mistral: The Legendary Wind of Provence (Damiani). Folia Gallery in Paris (13 Rue de l’Abbaye, 75006) is mounting an exhibition featuring large scale prints of images from the book that will open on June 26 and remain on view until July 13, 2019. Here’s a sneak peek at some of the photos, showing the impact of this relentless force of nature on life in Provence. The book is available for purchase on Amazon below. 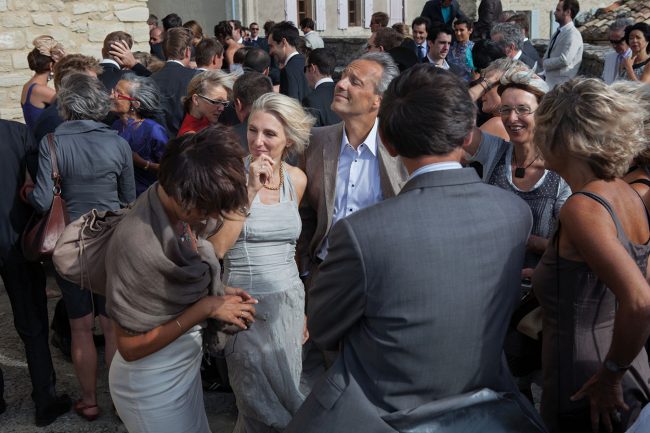 Outside the Saint-Romain church in Crillon-le-Brave, France, wedding guest enjoys being blasted by the mistral even as those around him hold onto their hats. 24 July, 2010. Photo: Rachel Cobb 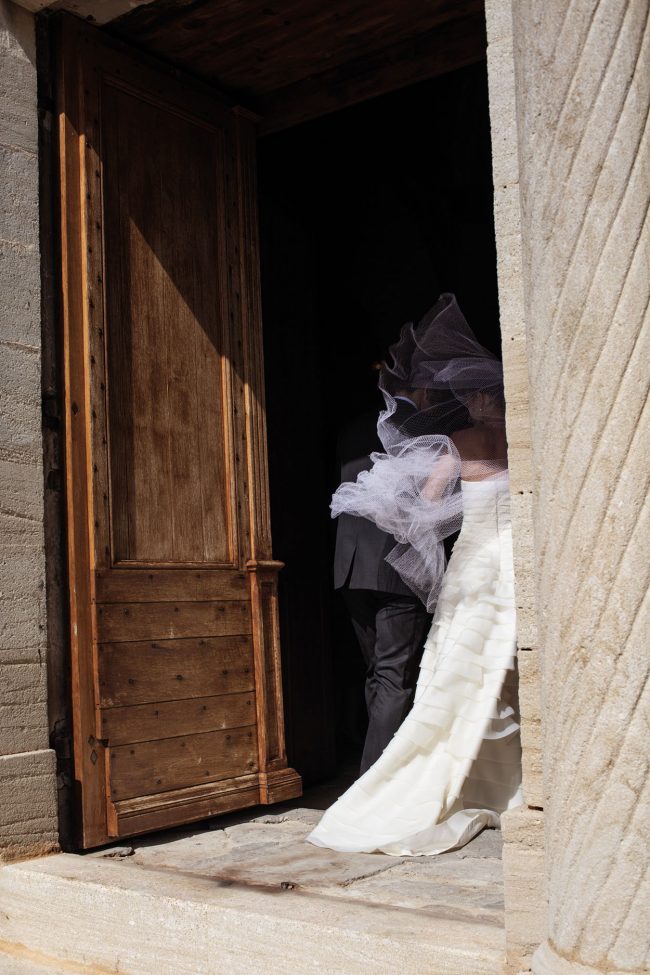 A bride’s veil gets tangled up by the mistral as she enters the Saint-Romain church, 24 July, 2010, Crillon-le-Brave, France. Photo: Rachel Cobb 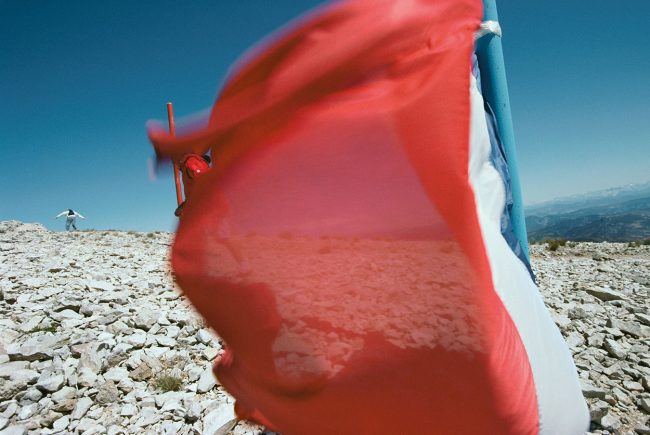 On the second to last day of the Tour de France, spectators withstand blasts from the mistral on Col des Tempêtes (Stormy Pass) atop Mont Ventoux. Also known as Mont Chauve (bald mountain), Mont Ventoux was once forested, but its trees were cut down for shipbuilding and charcoal production. The topsoil blew off, leaving a lunar landscape to this day. 25 July 2009, Mont Ventoux, France. Photo: Rachel Cobb 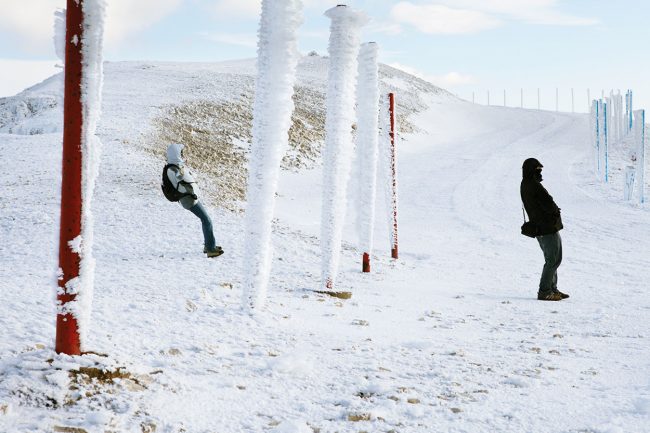 9 February 2013, 3:42 P.M., Col des Tempêtes, Mont Ventoux: gusts of 100 kilometers per hour—11 on the Beaufort Scale of Wind Force. The mistral barrels down the Rhône Valley, slams into Mont Ventoux, and rushes through this opening, hence the name, Stormy Pass. Photo: Rachel Cobb 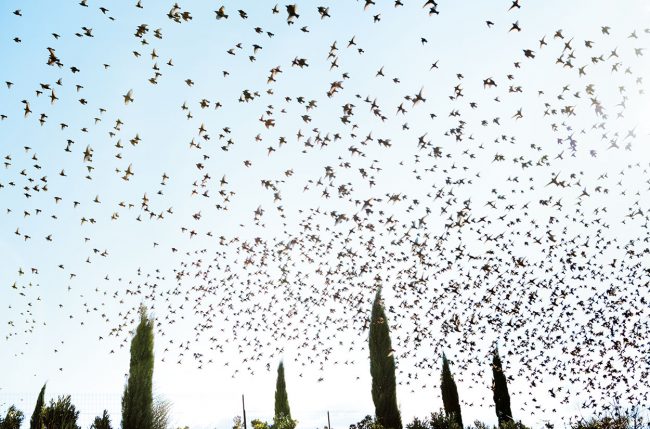 Birds soar in a mistral. Devino-vent is a Provençal word that means a wind diviner. These forecasters were dead birds, usually martins, that had been dried and hung on strings in the kitchens of farmhouses. 8 December 2012, Crillon-le-Brave, France. Photo: Rachel Cobb 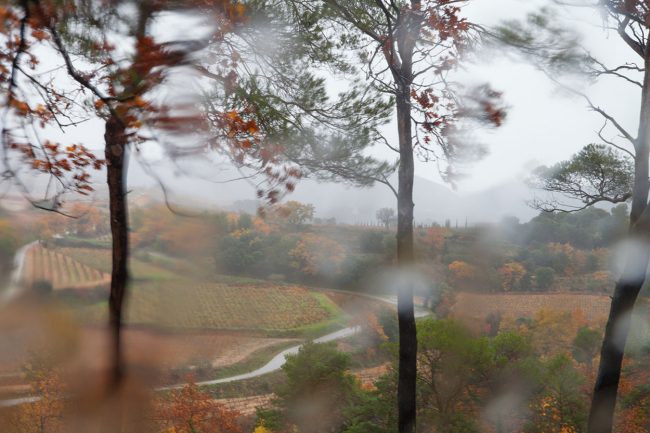 Previous Article Auberge la Fenière in Provence: the world’s only gluten-free, Michelin-starred restaurant
Next Article L’Oustalet: Where to Eat in Gigondas, Provence