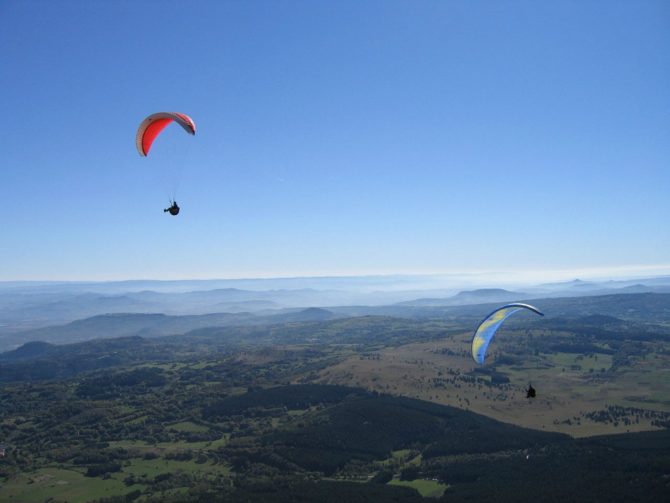 Even if you’ve traveled to every nook and cranny of France, discovering such diverse geographical regions you’d think you had hopped continents, there’s always something new to explore. Take the Auvergne region in central France. On a spring trip to the region, I was mesmerized by the landscapes—almost primordial—of the Chaîne des Puys, a string of 80 extinct (some say dormant) volcanoes traversing the Massif Central. These craters, domes and peaks are blanketed in lush, green vegetation and, in the warmer months, fields of wildflowers. The most famous of all is the Puy de Dôme, its mythical peak visible from Clermont-Ferrand, just a quick drive away.

Awarded “Grand Site de France” status in 2008, the Puy de Dôme has been a tourist destination for generations. (Affluent Parisians, on visits to the region’s famous spa towns, followed the fashionable crowd to the volcano’s summit.) There was even a tramway created in the early 1900s to transport tourists the 14 kilometre distance from Clermont-Ferrand.

Since 2012, a sleek electric train—the “Panoramique des Dômes”—has replaced the 57,000 cars and buses that were driven to the summit every year. The parking lot (an eyesore) was removed, and the environment restored to its natural state with the planting of 14,600 trees and shrubs.

From the visitor center, the train ride is 20 minutes to the top (1,465 metres). Fantastic 360 degree views await. When we arrived on a hot spring day, there was still snow on the ground.

The ruins of the Mercury Temple, an important Gallo-Roman pilgrimage site dating from the 2nd century, present an awesome site. Archeological excavations are in progress, as the temple is restored with a partial reconstruction of the sanctuary walls. Vestiges of the temple were first discovered when construction began on The Observatory in 1876 (it continues to be an important spot for scientists studying the atmosphere and analysing clouds). The 85 metre-high TV antenna wasn’t built until 1956.

Trains run every 20 minutes in high season (every 40 minutes in low season), and the price is 11 euros per adult and 5 euros for children 4-12 years old (high season). Prices are slightly cheaper in the low season. It’s also possible to walk to the top (40 minutes) on one of the hiking trails. For more information, visit the website: www.panoramiquedesdomes.fr

For travellers looking for destinations that ooze authenticity, the Auvergne region is still largely undiscovered, and you’ll be immersed in nature (and welcomed with genuine hospitality).