Naughty and Nice: 10 Picks for Christmas Shopping in Paris 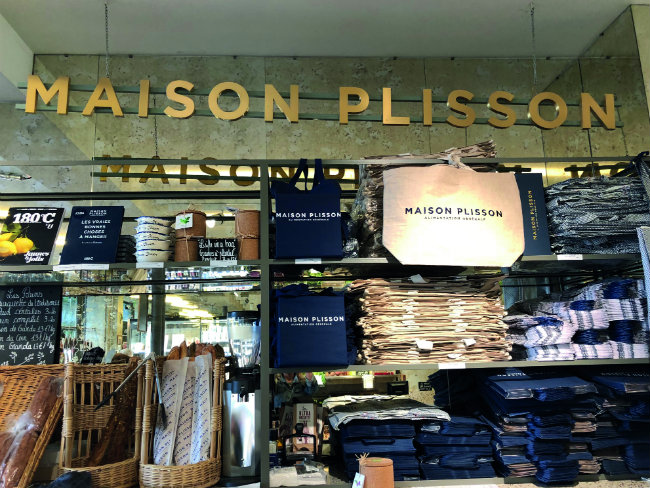 From France’s best beauty secrets and beetles that gleam like jewels to the sweetest bonbons and mustard on tap, Lindsey Johnstone finds there’s nowhere better than Paris to fill that Christmas stocking with some truly quirky cadeaux…

For a city that is synonymous with style, there are an awful lot of places doing a roaring trade in tourist tat in Paris – unfathomable when the world’s best shopping opportunities are around practically every corner. So make the most of them if you’re doing your Christmas shopping in the City of Light and ditch the Eiffel Tower key rings, French maid aprons and glittery, corset-shaped handbags (an item found in particular abundance around the Moulin Rouge) to slip a slightly more chic souvenir into your stocking this year – something an actual French person might buy.

The Haut-Marais’ answer to Dean & Deluca, the Maison Plisson deli played a part in making the 75003 the new 75004 when it opened its doors three years ago. Its neighbours on boulevard Beaumarchais are Merci, Acne and APC; and Maison Plisson – which stocks a lovingly curated selection of the best produce France has to offer, from asparagus to olive oil, and charcuterie to chocolate – is the gastronomic equivalent of those bastions of casual cool.

It’s proud of its hipster-central home turf, with the arrondissement’s postal code emblazoned across tea towels – choose from a map of France displaying its regional meats, cheeses or speciality dishes – for €10. Logo mugs are €6 and the cotton tote bags are €5, a veritable bargain for an It Bag. You’ll see them slung across the shoulders of those in the know, even if it is to carry groceries home from the Franprix a few doors down. A second location opened this summer at place du Marché Saint-Honoré in the 1st district. 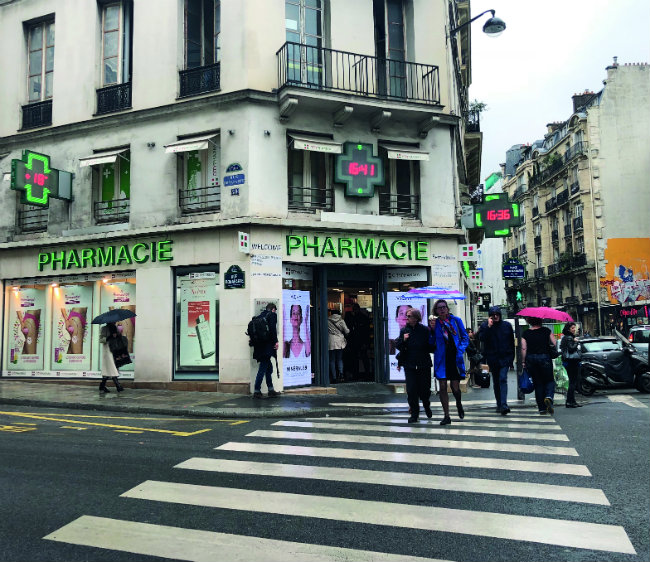 While French pharmacy brands such as Avène, Bioderma and La Roche-Posay have become mainstays abroad, there are still some secret weapons in the French beauty arsenal that are yet to make it overseas. When it comes to the pharmacie, the really good stuff is behind the counter. These no-frills formulations with higher concentrations of key ingredients than Brits and Americans can get at home outside of a dermatologist’s office will be rapturously received by any beauty addict.

The current skincare holy grails of retinol (vitamin A) and hyaluronic acid will be found unadulterated in, respectively, A313, a 2% retinol paste, and Ialuset, a 100% pure hyaluronic acid in cream form. Originally formulated to soothe cracked nipples during breastfeeding, Homéoplasmine has become a stalwart of makeup artists; it works magic on chapped lips and flaky winter noses and can be worn under makeup as a primer due to its matte texture.

Biafine began life as a burn cream for radiotherapy patients and subsequently found its way into every French medicine cabinet as an aftersun and all-round healer, and has been repurposed again by beauty aficionados as a moisturiser thanks to its proven ability to stimulate cell regrowth, while Hexomédine is a local antiseptic that makes short work of spots. None will add any glamour to your dressing table but all really work, and cost under €10 if you head to legendary hectic discount pharmacy Citypharma – easily picked out by the milling crowd of husbands and boyfriends waiting outside, some with empty suitcases. 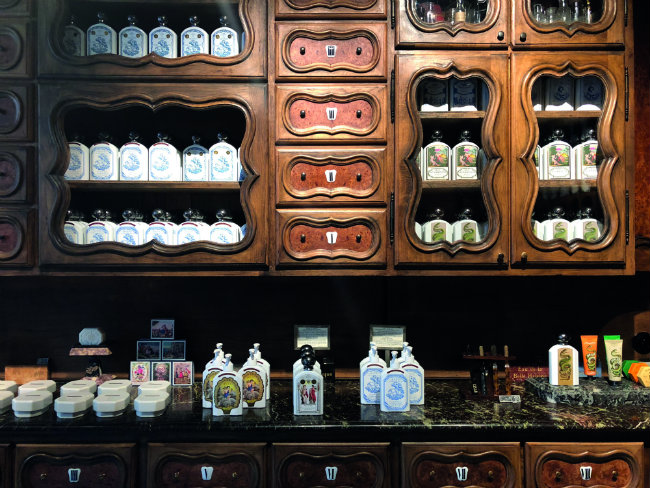 At the other end of the beauty shopping spectrum, L’Officine Universelle Buly offers the sort of experience Marie Antoinette (or her servants, at any rate) might have had at the apothecary. Taking in the wooden cabinets lining the walls, honey-coloured marble counters, delicately painted beams, cerulean tiled floors and golden swan-shaped taps, it’s hard to believe Buly hasn’t been around for hundreds of years – although in some iteration it has. The first shop may have opened on the Left Bank in 2014 and the second in the Marais last year, but they are a reincarnation of a dispensary of lotions, potions and elixirs opened a couple of centuries previously by one Jean-Vincent Bully (who subsequently and mysteriously dropped the second l). Such was his fame, Monsieur Bully was immortalised by Balzac, as the inspiration for Parisian perfumer César Birotteau, the eponymous protagonist of a novel from La Comédie humaine.

Products can be personalised on the spot with handwritten names– the staff are trained in calligraphy – so make particularly lovely gifts, and there is plenty that is affordable. Dental floss in orange, cinnamon and clove or mint, coriander and cucumber flavours is €13.50; body oils, cleansing milks and even mouthwash all come in elaborately illustrated ceramic bottles (€29-40), and all will impart a touch of Napoleonic chic to the bathroom shelf. 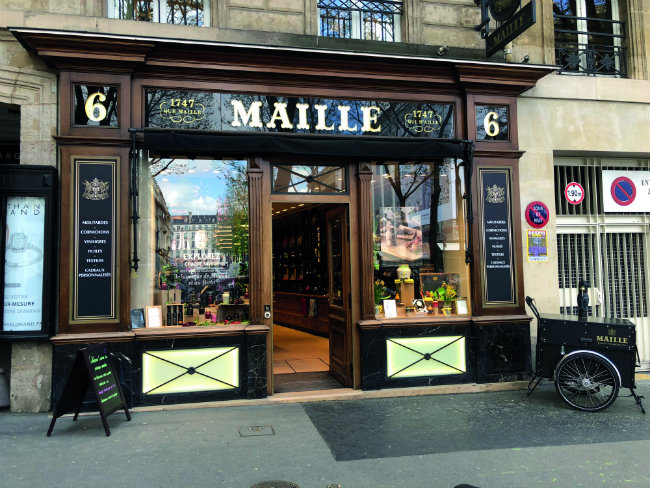 For condiment kings and queens, you won’t find better than a gift from the Maille mustard boutique at place de la Madeleine. The definitive mustard makers since 1747, founder Antoine-Claude Maille made 84 different types even back then. Like a sweet shop for those with a savoury tooth, today you’ll find flavours including honey with aged balsamic vinegar of Modena; saffron and crème fraîche; roasted onions and wild thyme; raspberry and basil; mango and Thai spices; celeriac, truffle and white wine, and gingerbread and chestnut honey – from €4 a pot. Don’t worry if the choice is overwhelming, they do tastings. They even do mustard on tap – buy a ceramic jar, choose from Moutarde à l’ancienne au Chardonnay, Moutarde au Chablis or Moutarde au vin blanc, watch as it’s freshly poured from the pump, and go back for a free refill when it’s finished (the perfect excuse for the recipient to book a trip to Paris – the gift that keeps on giving). 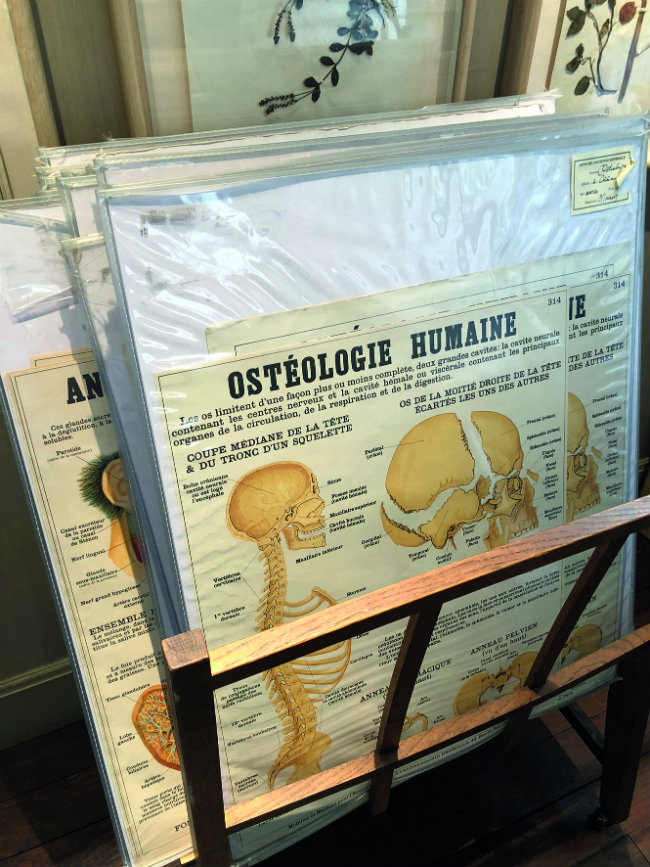 “Parisian cabinet of curiosity” Deyrolle, a Left Bank legend, was founded in 1831 by entomologist Jean- Baptiste Deyrolle. While insects are not the only creatures to be found inside this temple of taxidermy – camels, zebras, polar bears and a baby elephant are all for sale – they do make a much more portable present than these other inhabitants. Glinting teal and emerald beetles and butterflies in every colour on earth can be mounted and framed, with prices ranging from €6 into the hundreds. Deyrolle’s vintage and reproduction natural history posters (from €12) make excellent gifts, easily tailored to individual interests, reliably detailing everything from orchids to beer production to the human circulatory system, pollination to the potato. Or if you can’t choose, they come in a series of beautifully bound hardback books (from €29.50) with themes including fantastical creatures, underwater life and metamorphosis. 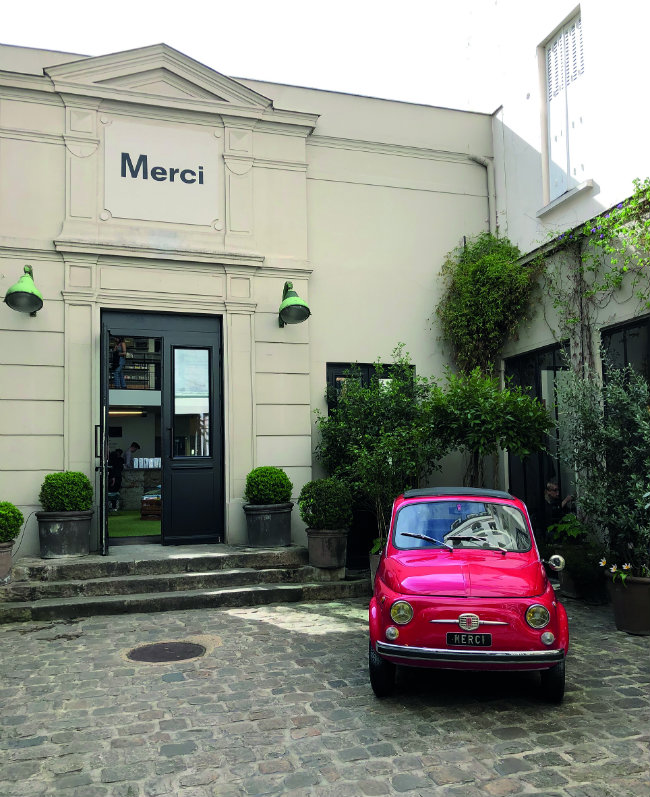 Now that queen of Parisian concept stores Colette has closed its doors, Merci has inherited the destination shopping crown. With three floors of furniture, kitchen gadgets, glassware, candles, ceramics, toiletries, trinkets, stationery, jewellery, men’s and women’s fashion, plus a café-cum-bookshop, and collections which change regularly according to a theme as well as frequent collaborations with brands and artists, there are a thousand things under its roof at any one time that would make rapturously welcomed gifts. But Merci’s huge range of crinkled washed linens in a muted rainbow of faded hues are its signature perennial product – or products; there are napkins, bed linen, cushion covers, throws, bath robes, towels and tote bags – and were an interiors style staple for Parisians long before you could find similar in H&M. Prices start from €9 for napkins and table mats, tea towels are €19, shopping bags are €39, while bath towels go from €30-€60 and bath robes are €130. 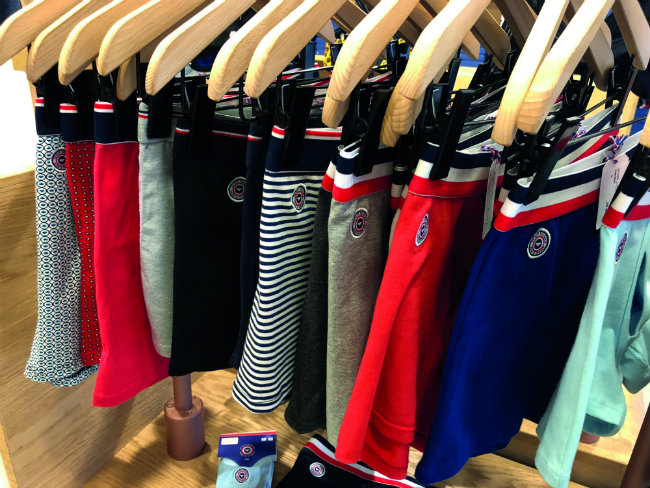 Le Slip Français was founded in 2011 by a then 25-year-old graduate of the country’s top business school who, inspired by brands such as Hermès and Louis Vuitton, wanted to tap into France’s proud tradition of textile manufacturing with a product at an affordable, mass-market price point. And who doesn’t need underwear? The fact that it’s 100% Made in France is integral to the brand, even down to the predominantly red, white and blue palette, and the boutique in Saint-Germain displays a map of the country, showing where all the products – boxers and briefs, swimming trunks and shorts, socks, long johns, bras and bikinis and swimsuits, gym gear, plus the thread and the packaging – are made. The hip, simple designs are the ideal gift for hard-to-buy-for men (who know they’re getting boxer shorts anyway) with boxers from €29 and socks from €9. 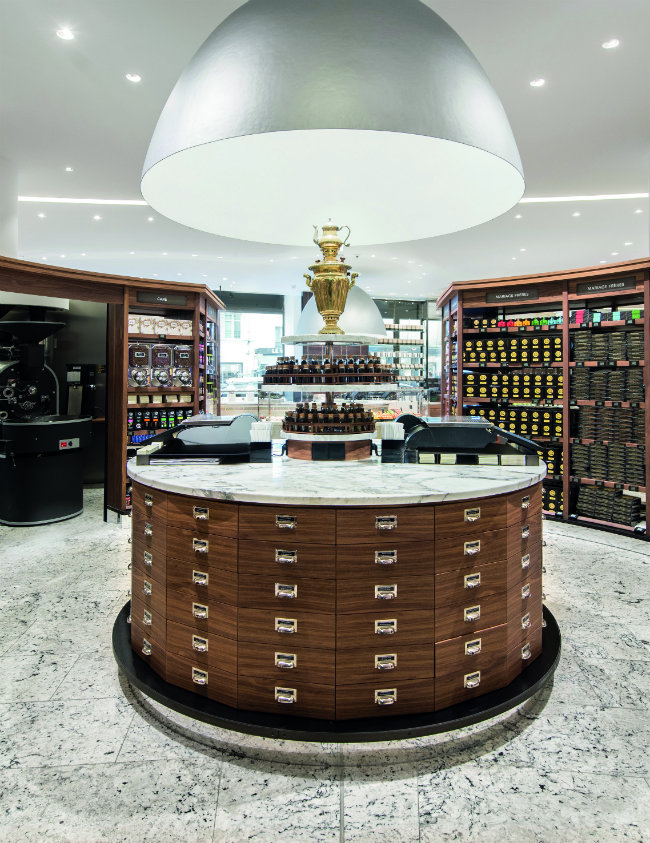 For a quintessentially French present that’s ready-made for the whole family, the traditional two-handled bowl used for hot chocolate or a café au lait, pre-emblazoned with generationally appropriate nicknames, hits the mark. The fact that drinking from a bowl rather than a cup is completely alien to Anglo-Saxons seems to add a thrill for children and makes for a lifelong keepsake – childhood bowls proudly displayed in Parisian apartments long after their owners have left home are a common sight. Pick yours up from La Grande Épicerie, the food hall of Le Bon Marché (the world’s oldest, and chicest, department store) on the Rive Gauche. Choose from la puce (the flea, a pet name in France) for the baby of the family, la princesse or enfant roi for the child who rules the roost, fils à papa (literally daddy’s boy, actual meaning ‘spoilt brat’) and the corresponding papa gâteau (doting father) plus an assortment of the animal-based nicknames the French are so fond of
– canard (duck), lapin (rabbit), chaton (kitten) and, esoterically, ouistiti (marmoset). From €22. 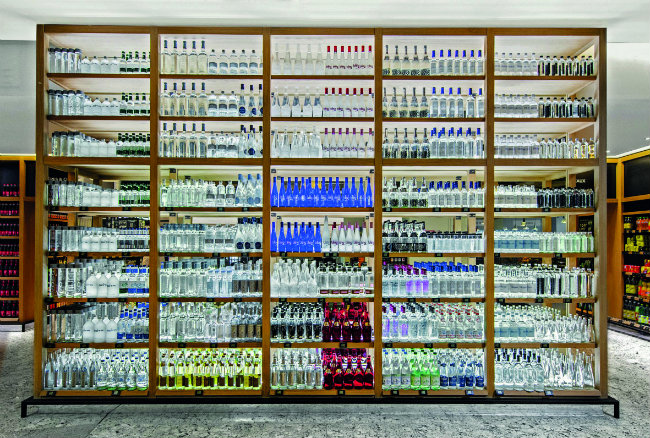 Rendering the functional a thing of beauty is the raison d’être of Perigot, a small chain of hardware boutiques selling household essentials – clothes pegs, sponges, brushes, watering cans, shopping trolleys, step ladders, dust pans, dog leads and doorstops – and making them more covetable in their utilitarian elegance than you would have believed possible. The ostrich feather and bamboo dusters (€21.50 for small, €39.50 large) are the stars of the satisfyingly old-fashioned show, displayed in gleaming chrome buckets (also for sale) like luxuriant bouquets and the perfect gift for the pragmatic aesthete in your life. 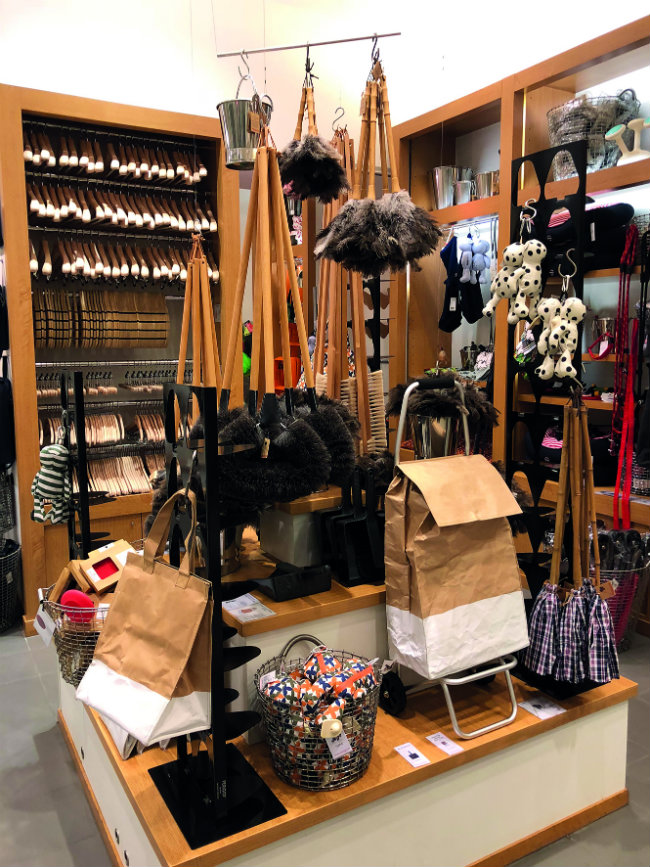 And finally, Christmas wouldn’t be Noël without sweets. Le Bonbon au Palais sells traditional regional French sweets, and tells you stories about them as an added extra. In the shop along the street from the Sorbonne, with its charmingly misspelled signage, the past is preserved like the sweets in their rows of gleaming glass jars, whether it’s giant fresh marshmallows from Toulouse and Bayonne in flavours of geranium, pistachio, licorice and lychee; lollipops in kiwi or cactus, honey or melon; or whole candied, crystallised violettes de Toulouse, with “every speck of sugar like a diamond”. Owner Georges’ enthusiastic description of exactly how the essence is extracted is a tale of blossoms handpicked in Grasse, dried for a day, and sat in sugar for three days, the same way they have been processed since the 19th century. 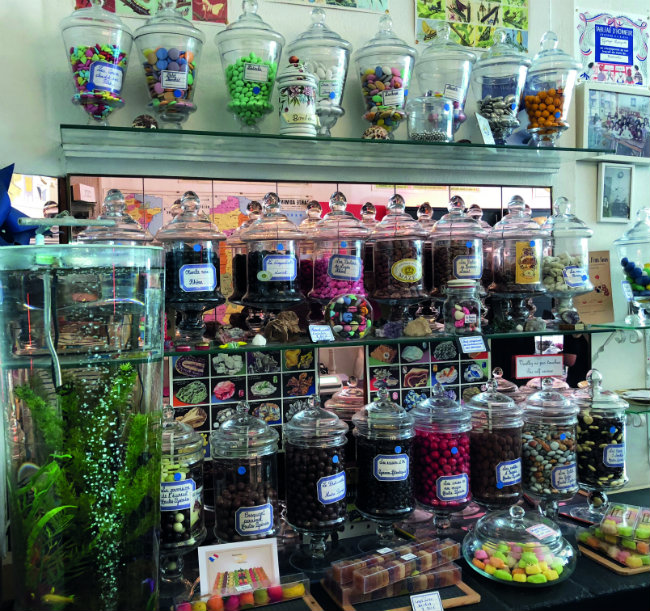 Previous Article The Heritage of Bordeaux: 5 Must-See Sites in the Port of the Moon
Next Article Read the Signs: Rue des Martyrs in Paris